Continue to The Hollywood Reporter SKIP AD
You will be redirected back to your article in seconds
Skip to main content
January 31, 2019 7:00am

Maybe it’s just another case, as Donald Trump would say, of “failing Europe.” As North American box office soared to record heights — $11.85 billion in grosses, with more than 1.3 billion tickets sold — Western Europe slumped. In Europe’s five biggest territories — the U.K., France, Germany, Spain and Italy — box office returns ranged from tepid to terrifying. Germany saw ticket revenue plunge 16 percent to $965 million, the first time in years the territory failed to clear the $1 billion mark. Italian cinemas had their worst year in a decade, with grosses down 5 percent to $633 million — the low point in what has been a long slide for Italy, whose market was bringing in about $200 million more just eight years ago.

France and Spain tried to put a brave face on their results — down 3 percent and 2 percent, respectively — while Britain counted as a win the fact it ended the year flat, off just 0.1 percent at $1.63 billion. The U.K. Cinema Association, accurately, pointed to admission figures that, at 177 million tickets sold, were the highest they’ve been in Britain since 1970.

Many have tried to explain away Europe’s 2018 dip by pointing to the traditional culprits, including a summer heat wave and competing entertainment in the form of the World Cup. But how then to explain why France, which won the soccer tournament, and England, which had a run to the semifinals, saw less box office damage than Germany, which was knocked out of the World Cup in the first round?

Others have pointed the finger at Netflix, which has exploded in Europe, helping drive total SVOD subscriber figures across Western Europe to 69 million. According to a recent report by London-based Futuresource, overall streaming revenue, at $5.7 billion, has overtaken DVD and sell-through revenue for the first time in the region. European box office “will likely continue to decline, very slowly, over the coming years,” says Futuresource analyst David Sidebottom.

Distributors in several territories have blamed the streaming giant for supposedly undermining the theatrical experience by giving single-weekend “alibi” releases in Europe to films such as Alfonso Cuaron’s Roma and the Coen brothers’ The Ballad of Buster Scruggs. “We actually found that Netflix, when it first entered European markets, had a positive effect on movie ticket sales because people who subscribed to Netflix were more likely to go to the movies,” says Anton Parlow, an assistant professor at Germany’s University of Rostock, who, together with colleague Sabrina Wagner, last fall published a study of the “Netflix effect” on European box office from 2000 to 2016.

However, Parlow says, as Netflix has moved into financing and is releasing more original content, the effect has been reversed. “Starting in 2016, we’ve seen a negative correlation between Netflix and theatrical admissions,” he says. “It is likely that as Netflix continues to make and screen more high-quality local productions, the trend will continue and movie ticket sales will decrease further.”

But Netflix and other streamers are also popular in the booming U.S. market. Europe’s box office ills may just be the result of a more practical, brick-and-mortar problem. Italy, until now, has been hampered by an old-school distribution structure that — created for a pre-air conditioned world — avoided releasing movies in the summer on the assumption that Italians would rather hit the beach than sit inside in the sweltering heat. In Germany, many of the country’s aging theaters — especially its multiplex chains — date to the 1990s. The U.K. has been a leader in this area, with Odeon upgrading to high-end boutique cinemas and chains such as Vue aggressively discounting tickets at certain venues to drive admissions.

“The Brits have invested in their theaters, and they’ve taken real risks,” one frustrated German distributor tells THR. “In Germany, your average theater lobby hasn’t been painted since the fall of the Berlin Wall. Why would anyone pay $12 to take your date to a place like that?” 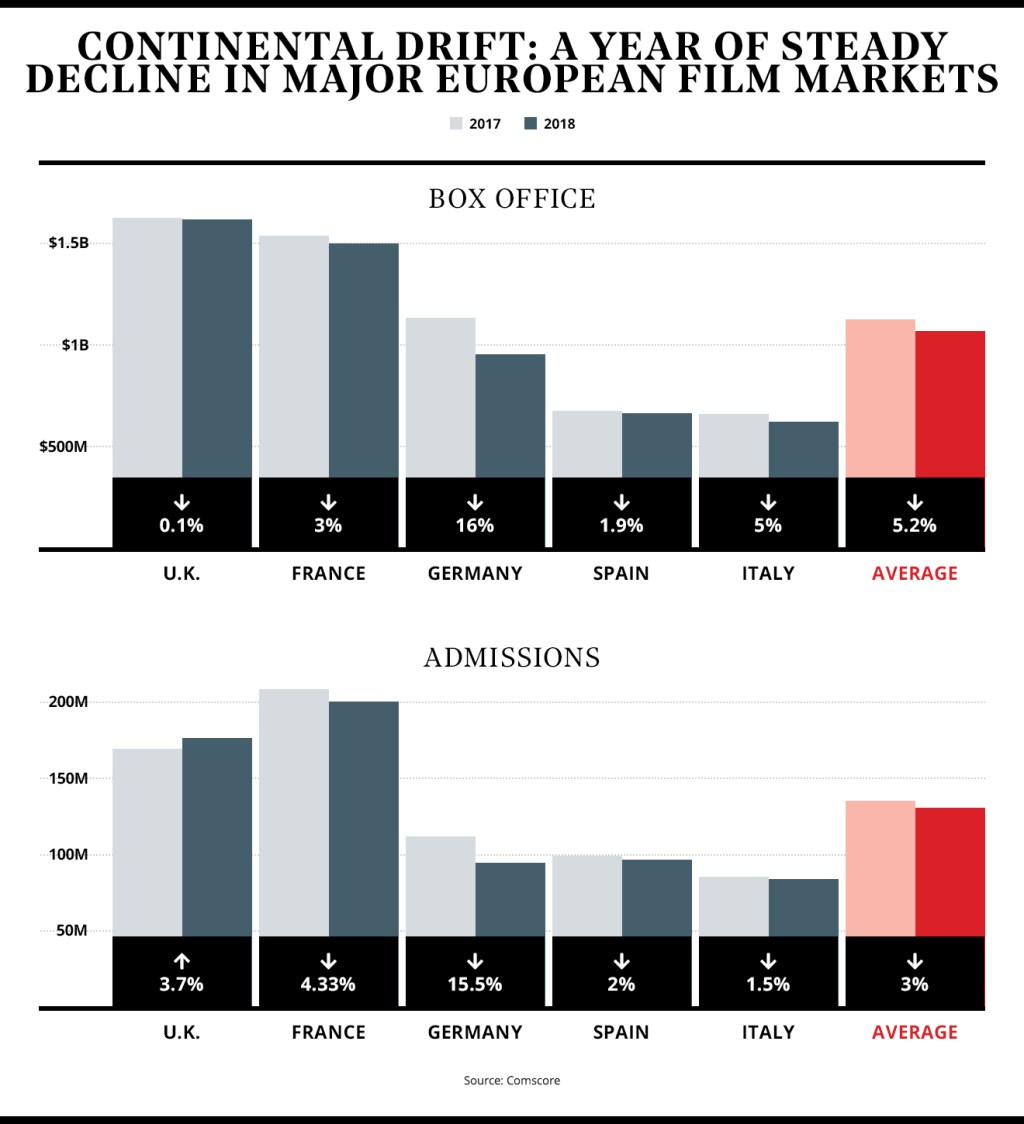 Scott Roxborough is the Europe bureau chief at The Hollywood Reporter.