It had taken years — and the passionate support of Kirk Kerkorian, who financed the film’s $100 million budget without expecting to ever make a profit — for The Promise, a historical romance set against the backdrop of the Armenian genocide and starring Christian Bale and Oscar Isaac, to reach the screen. Producers always knew it would be controversial: Descendants of the 1.5 million Armenians killed by the Ottoman Empire shortly after the onset of World War I have long pressed for the episode to be recognized as a genocide despite the Turkish government’s insistence the deaths were not a premeditated extermination.

The Promise, which opens April 21, finally would bring the untold saga to a mass audience. But at the Toronto Film Festival premiere in September, producer Mike Medavoy watched the late billionaire’s carefully laid plans upended by a digital swarm that appeared out of nowhere.

Before the critics in attendance even had the chance to exit Roy Thompson Hall, let alone write their reviews, The Promise‘s IMDb page was flooded with tens of thousands of one-star ratings. “All I know is that we were in about a 900-seat house with a real ovation at the end, and then you see almost 100,000 people who claim the movie isn’t any good,” says Medavoy. Panicked calls were placed to IMDb, but there was nothing the site could do. “One thing that they can track is where the votes come from,” says Eric Esrailian, who also produced the film, and “the vast majority of people voting were not from Canada. So I know they weren’t in Toronto.”

The online campaign against The Promise appears to have originated on sites like Incisozluk, a Turkish version of 4chan, where there were calls for users to “downvote” the film’s ratings on IMDb and YouTube. A rough translation of one post: “Guys, Hollywood is filming a big movie about the so-called Armenian genocide and the trailer has already been watched 700k times. We need to do something urgently.” Soon afterward, the user gleefully noted The Promise‘s average IMDb rating had reached a dismaying 1.8 stars. “They know that the IMDb rating will stay with the film forever,” says Esrailian. “It’s a kind of censorship, really.”

While the attack against The Promise is an extreme case, colored by decades of fraught discussion over the Armenian genocide, it highlights a growing problem in Hollywood. A search of 4chan reveals multiple campaigns against everything from Star Wars spinoff Rogue One to indie Holocaust-denier drama Denial to Justin Simien’s upcoming Netflix series Dear White People, many with step-by-step instructions on how to negatively impact films on sites like IMDb and YouTube. Once just a curiosity — for years, Korean fans made an annual ritual of vaulting K-Pop idol Rain to the top of the Time 100 Poll — online trolls now are a movie marketer’s worst nightmare.

In 2016, the all-female reboot of Ghostbusters became a magnet for a downvoting campaign from 4chan and Reddit users. They organized to give hundreds of thousands of “thumbs down” to the film’s YouTube marketing materials — its first official trailer, the video of its theme song, even a clip of the cast on Jimmy Kimmel Live! Sony began releasing the film’s trailers on Facebook, which has no “dislike” button, but by then the trolls had taken hold of the narrative. It’s impossible to say whether they made an impact on the box office, but in the end, Ghostbusters lost an estimated $70 million. 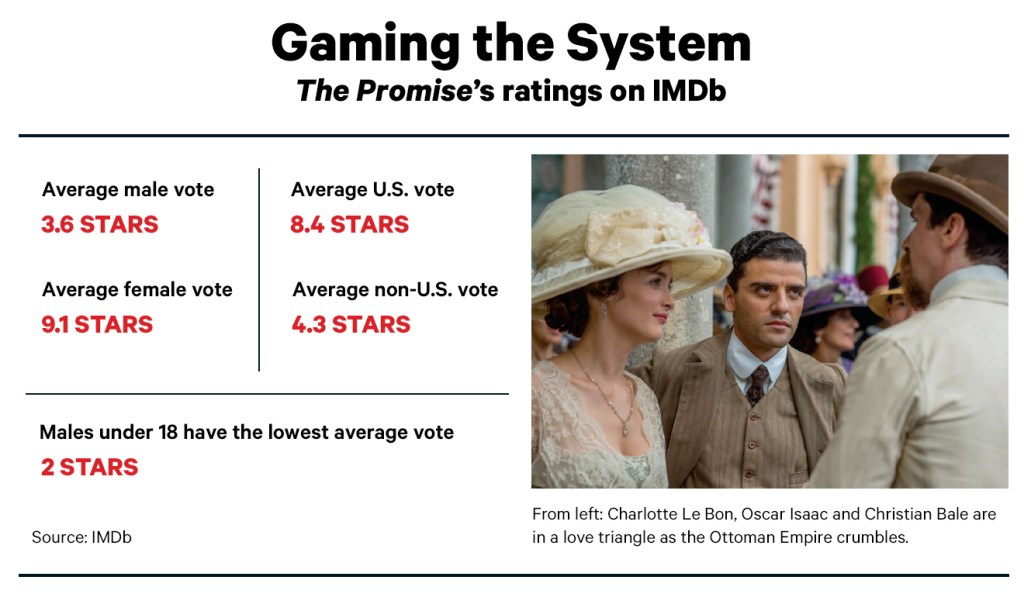 Harvey Weinstein on Jay Z, Trump and His Dream to Produce the Oscars (With Spielberg)

Studios can’t count on the websites hosting the ratings for help. When THR reached out for comment, a spokeswoman for Amazon-owned IMDb referred to the site’s FAQ section, which notes that its ratings system is meant to aggregate public opinion. It uses a weighted average but doesn’t reveal specifics about how a film’s final rating is determined in order “to prevent abuse and minimize attempts to stuff the ballot or otherwise influence the integrity of the voting system.”

These types of attacks aren’t exclusive to IMDb. Amy Schumer posted a lengthy message on Instagram in March after news sites reported that her new Netflix stand-up special, The Leather Special, had a one-star rating on the streamer. “The alt right organized trolls attack everything I do,” reads her post. “They organize to get my ratings down. Meeting in sub Reddit rooms.”

Netflix maintains that its star rating was not an average of all users’ ratings but rather a personalized recommendation based on a user’s viewing history, past ratings and the ratings of other members with similar viewing habits. But a search on Reddit yields multiple calls to downvote Schumer’s special, including several in a single forum with over 380,000 subscribers.

Netflix ditched its star ratings this month, replacing them with a percentage score of how likely any individual user is to enjoy a film. And for some Netflix members, Schumer’s stand-up special was upgraded from a low star rating to an overwhelmingly positive percent match score.

So what’s the best way to fight off an army of trolls? The only way may be to raise an army of your own.

On IMDb, The Promise now has an average of 4.2 stars thanks to more than 35,000 10-star ratings that have been left by supporters of the film to counter the more than 60,000 one-star ratings. (There are fewer than 1,400 ratings between two and nine stars.) Esrailian doesn’t pretend that all of those high ratings come from people who’ve seen and loved the film. But he’ll take their votes nonetheless: “People realized you had to fight fire with fire.”

'Fate of the Furious' Box Office: Who Showed Up and Who Didn't