As Hollywood companies and affiliated organizations scramble to hire diversity experts and strategists as part of their public commitments to inclusion, management consulting powerhouse McKinsey & Co. has applied its analytic expertise to the industry as a whole in a report diagnosing the experience of Black professionals working in entertainment.

Penned by McKinsey partners Jonathan Dunn, Sheldon Lyn and Ammanuel Zegeye and consultant Nony Onyeador, Black Representation in Film and TV: The Challenges and Impact of Increasing Diversity declares that collective, systemwide action is imperative for reform. “In any given week, let alone an entire career,” the report’s authors write, “a professional working in Hollywood might have to traverse multiple separate entities — agencies, unions and guilds, studios, networks, production houses, financiers, festivals, critics and awards establishments.” Because of the industry’s unique structure of “tight-knit, interdependent networks,” “small and informal” work settings and “temporary and contract-based” work, “a single company’s efforts to change the racial dynamic inside its own four walls can do only so much for the entire ecosystem.”

The report comes eight months after McKinsey declared in July 2020 that it would devote $200 million in pro bono work to advancing racial equity and Black economic empowerment. The consulting firm, which last month published Race in the Workplace: The Black Experience in the U.S. Private Sector, set its sights on Hollywood after The Black List founder Franklin Leonard (a former McKinsey analyst) reached out to the company and put it in touch with the BlackLight Collective, an informal group of 90-plus Black entertainment industry leaders who have quietly been working behind the scenes to support the community and effect tangible reform.

“Major media companies pay McKinsey to help them navigate difficult business situations,” Leonard tells The Hollywood Reporter, adding that the significance of this report is McKinsey’s reputation as a corporate entity squarely focused on business efficiency. “So why not get the people that they normally pay to do this work, to tell everybody this is what the reality is, this is how much money you’re leaving on the table, and this is the way forward?”

Drawing from research both qualitative (more than 50 one-on-one interviews with Black and non-Black industry participants) and quantitative (a compilation of studies from UCLA, Nielsen, USC Annenberg Inclusion Initiative, Variety Business Intelligence and more), the McKinsey report establishes a familiar statistical foundation that finds Black professionals proportionately underrepresented both on- and offscreen (the authors note that “the prominence of certain films and TV series with Black leads obscures [that] fact”). 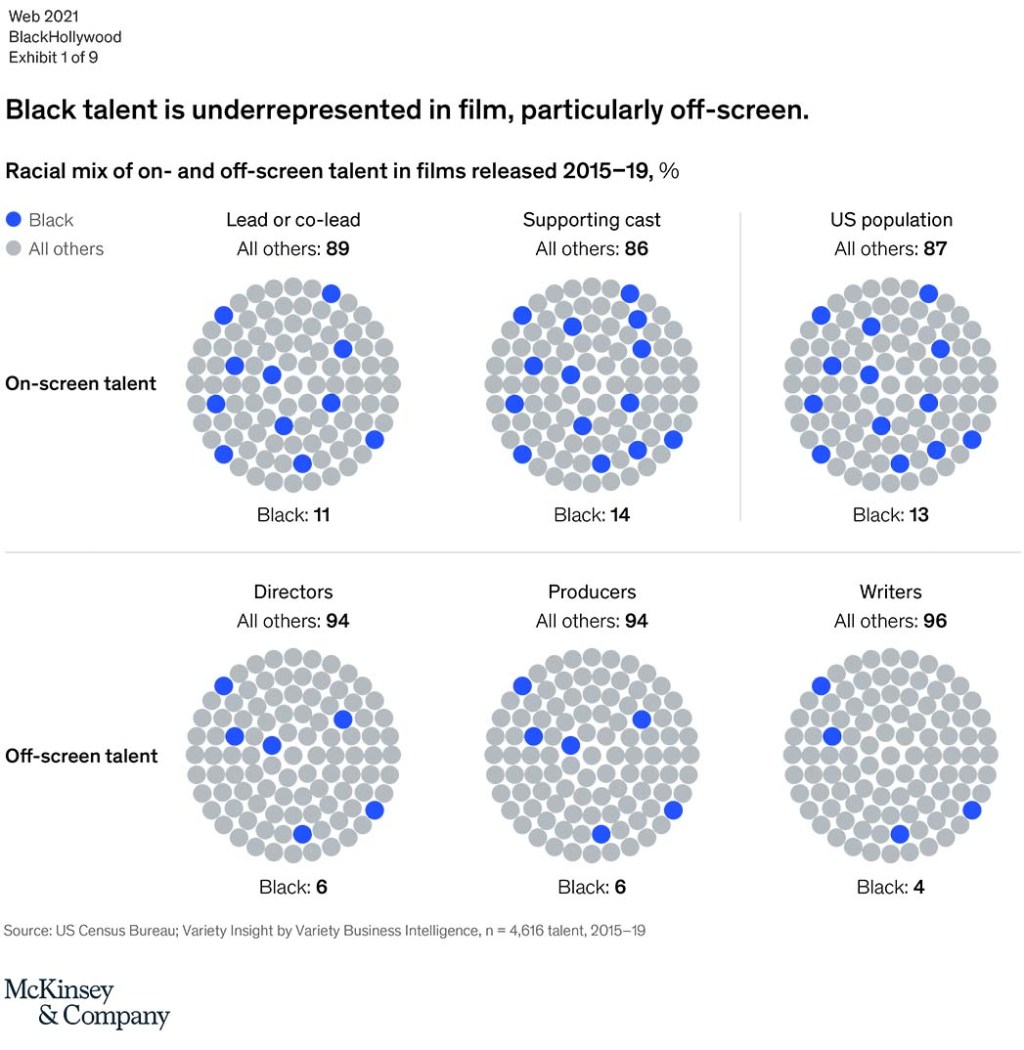 However, one original finding is likely to have even the most jaded and change-resistant industry gatekeepers take notice: The McKinsey report estimates that the $148 billion film and TV industry is leaving more than $10 billion in annual revenue on the table by not resolving its inequity issues when it comes to Black inclusion — a potential loss of 7 percent. This estimate is based on the consulting firm’s projection of profits in a more equitable ecosystem, one that has “[closed] the representation deficit for Black off-screen talent, [achieved] production and marketing budget parity, and [given] Black-led properties equal international distribution.”

Entertainment’s unrealized gains (which could represent an even greater share of total revenues if inequity faced by other marginalized communities is factored in) echo the trend line across the economy; previous McKinsey reports project that closing the racial wealth gap could increase the U.S. GDP by 4 to 6 percent by 2028. In fact, for an industry that prides itself on liberal ideals, entertainment C-suites are actually whiter than their counterparts in many other fields, including health care, heavy industry and non-entertainment tech, media and telecom. Senior leadership in film is 92 percent white, less diverse than the energy, transport, finance and consumer goods sectors. 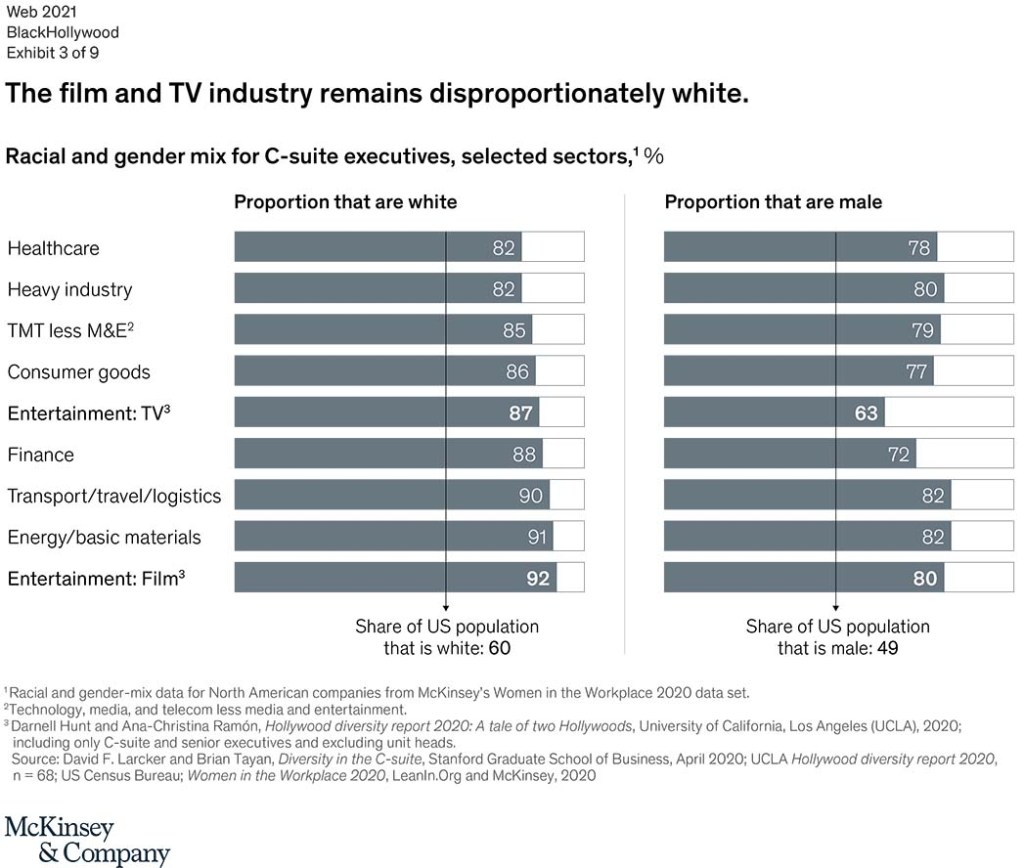 McKinsey’s holistic approach to examining Black inclusion also yielded the identification of nearly 40 specific “pain points” that Black professionals and talent commonly encounter all along the industry pipeline. “We wanted to understand the lived experience of Black professionals along the end-to-end journey of content production and distribution, from applying for an entry-level position or pitching new ideas to shooting on location and distributing a finished product,” the authors write. 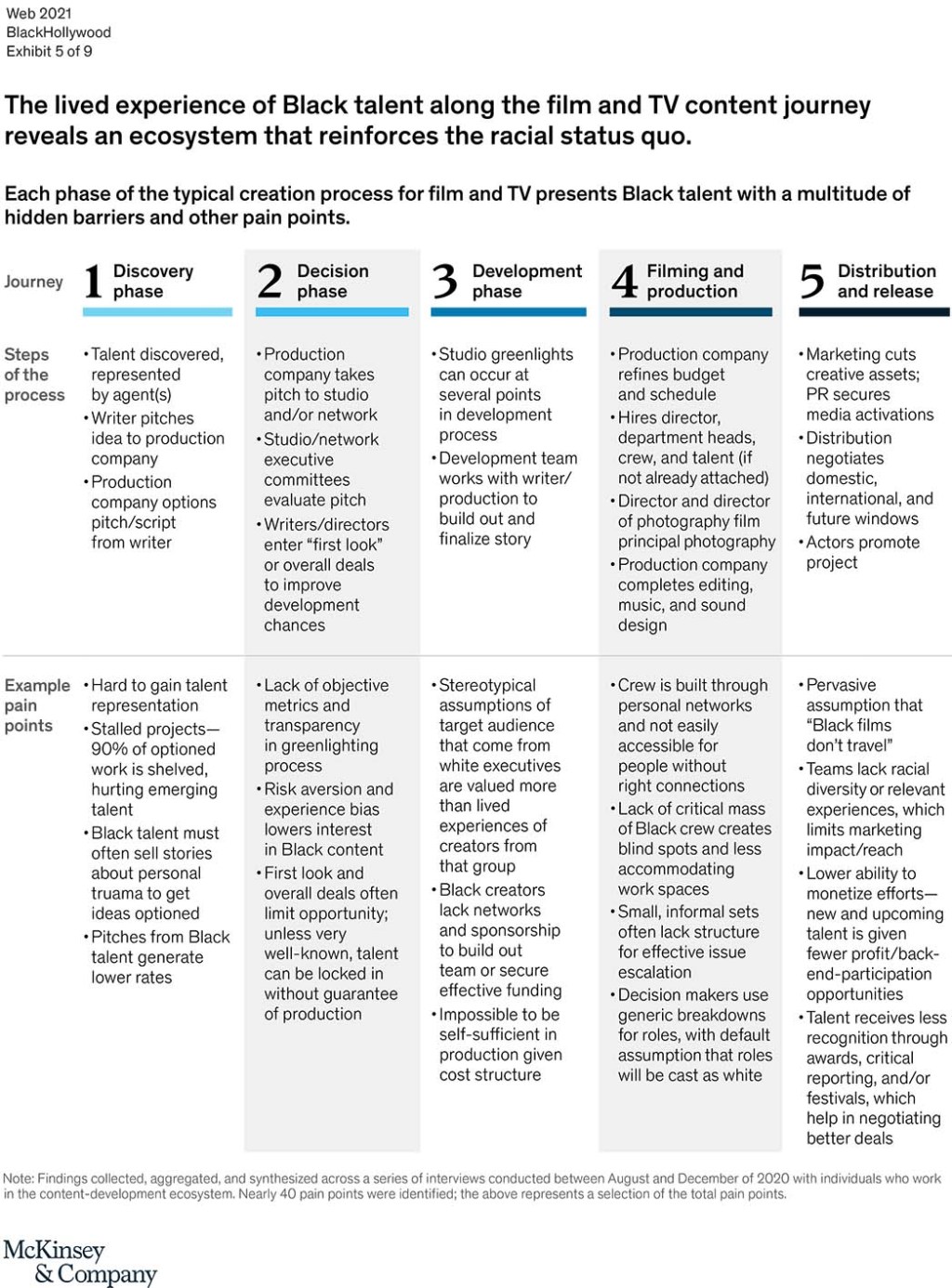 From talent discovery and representation to development to production to distribution and marketing, Black artists face hidden barriers that include smaller pitch sales, stereotypical assumptions of what kinds of Black stories are preferred, and lower production and publicity spends (on average, Black-led films receive 24 percent smaller production budgets than their non-Black counterparts, while movies written, directed or produced by Black talent get 43 percent less money). This creates a chicken-egg scenario, wherein financial and social barriers to entry are both compounded by and feed into a lack of Black leadership among gatekeepers at the top. 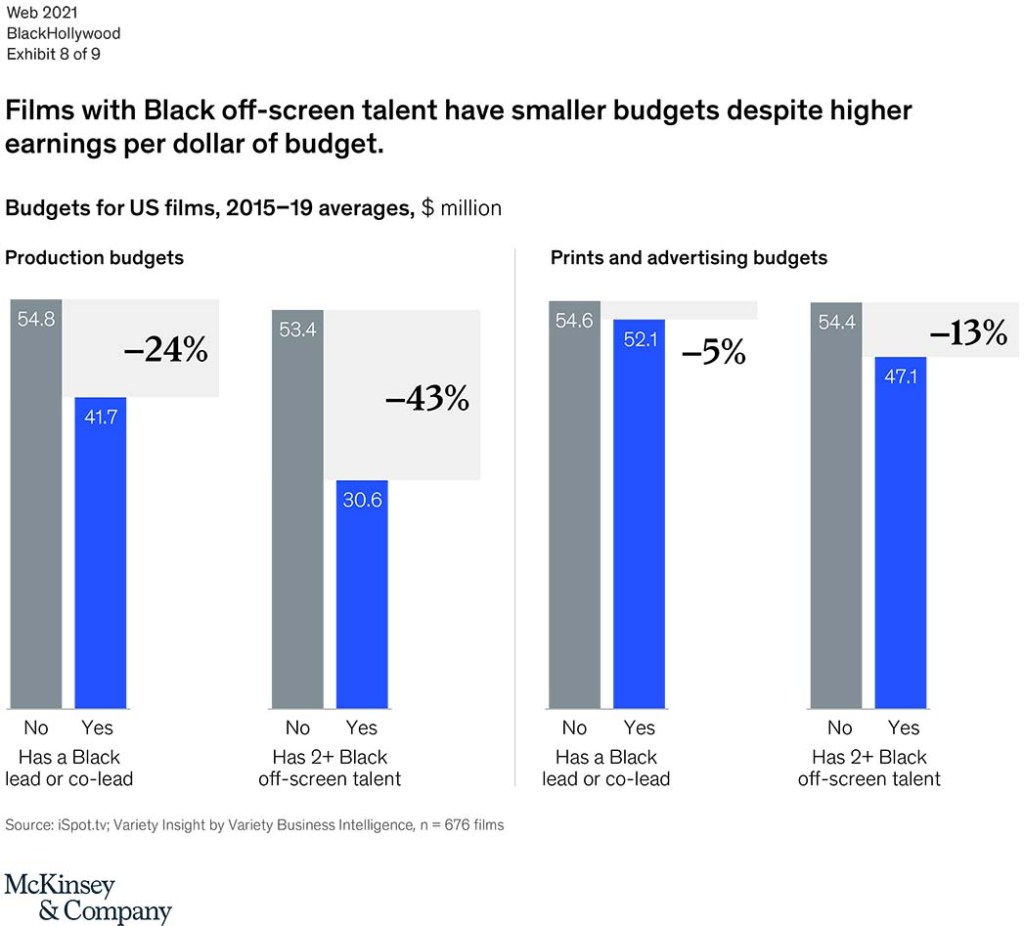 The “Black tax”— the expense of time and energy to deal with situations that non-Black peers don’t face — also puts Black professionals at higher risk of burnout and turnover in the industry, in addition to interfering with their abilities to perform their official job duties. “It would seem unreasonable to expect on- and offscreen Black talent to continue spending countless hours trying to reform this vast, complex industry on their own, time they could otherwise be spending creating the next hit series or blockbuster movie franchise,” the authors write.

As such, the McKinsey report concludes with four recommendations that are not novel suggestions but offer a degree of specificity that could help bring accountability to the clutter of Black-square declarations. The proposed measures largely revolve around achieving proportionate representation and call for “key entities” (e.g., studios, networks, streamers, agencies) to publicly commit to matching the 13.4 percent Black share of the U.S. population (and, perhaps more painfully, the 60 percent white share of the population) in hiring across all levels and divvying up annual budgets (for example, studios could earmark 13.4 percent of their yearly development, production and marketing spends to Black-led projects). Gatekeepers loath to enact such radical change could be incentivized by tying executive bonuses to diversity and inclusion targets.

And finally, given the diffuse yet interdependent nature of the industry, the McKinsey report calls for the formation of an independent, well-funded advocacy coalition dedicated to advancing racial equity in the Hollywood. Such an organization, if composed of stakeholders who have both the motivation and the power to collectively implement reform, could standardize DEI best practices (such as rubrics for performance evaluations and promotions) across the industry as well as collect and distribute data to keep businesses transparent and accountable.

Although the McKinsey report focuses specifically on the inclusion and experience of Black professionals in Hollywood, the authors note that addressing the “system-level challenges and barriers” that they face will improve equity and inclusivity for all underrepresented groups in the industry — and beyond. Says Leonard, “Hollywood is less diverse than every major industry in the country, but we’re also exporting that bias and view of the world to everyone in the world via movies, television and every place people consume content.”