Fresh off the star-studded West Coast debuts of Frieze and Felix, Los Angeles continues to play host to global talents, this time from the Philippines. Brad Pitt, Lady Gaga, and former President Barack Obama are among the supporters of designers being showcased in Pulo Project, a four-month series highlighting contemporary art and design from the South Asian country, which has notably influenced L.A.’s culinary scene in recent years and even inspired a new beauty concept bar. L.A. is also home to the largest Filipino population in the U.S.

Curated by L.A.-based Filipina-American designer Michelle Aquino, the exhibit is open now through August 4 in Downtown at Please Do Not Enter and inside the NoMad Hotel’s gift shop and exhibition space, The Lab. It marks the debut for many of the designers, including Manila-based sculptural artist Leeroy New (who has designed futuristic wearable art for Lady Gaga), luxury accessories label Neil Felipp (whose Suzy Wong dragon minaudière was recently seen in Crazy Rich Asians), hand-woven accessories brand Zacarias 1925, jewelry designer Susanne Verallo (known for her intricate inlaid shell adornments), and marine biologist-turned-accessories designer Ken Samudio, whose background shines in sea anemone-esque beaded necklaces ($188 to $1,625).

Neil Felipp has been featured and awarded with the below : Look of Style Awards 2013 (Accessory Winner), One of the featured design brands during Première Classe Paris, Forum des Tendances 2017, and Featured in the 3rd book of the Best Selling Book Series by Kevin Kwan “Crazy Rich Asians”. As part of PULO Project by Michelle Aquino, Please Do Not Enter is proud to show @neilfelipp iconic clutchs collection. . . #pleasedonotenter #puloproject #neilfelipp #craftsmanship #luxury #stylist #accessories #philippines #filipinodesigner #crazyrichasians #conceptstore #losangeles

“Most people think of the folk and the craft of the Philippines, so I wanted to show a different take [on the country’s design scene],” Aquino tells The Hollywood Reporter. The San Diego-bred curator embarked on a personal pursuit to discover more Pinoy designers, giving way to Pulo (which means “island” in Tagalog) Project.

On display through July 7 at Please Do Not Enter (where Aquino is also store director) are works from renowned furniture designer Kenneth Cobonpue, whose fans include Pitt and Angelina Jolie (the then-couple bought the Voyage bed for their son, Maddox, and had a custom crib made for daughter, Shiloh Jolie-Pitt), former President Obama (who bought a custom Yoda chair), Queen Rania of Jordan and Queen Sophia of Spain. (Cobonpue recently designed up a five-piece Star Wars-inspired collection for Disney and also dreamed up the casino bar in Ocean’s Thirteen; The Philadelphia Museum of Art also has a permanent collection of his works.)

Visitors can take a seat on Cobonpue’s popular Dragnet chair or the Chiquita stool, which features a memory foam-like seat made of rattan poles (it’s much comfier than it sounds). There’s also coral-inspired decor made from twisted salago fibers, playful Kala bird vases ($100 to $110), and the $21,000 Conch lighting installation, the gallery’s site-specific hero piece featuring ten hand-woven seashell-inspired pendants — a collaboration with longtime friend and designer Luisa Robinson.

Rounding out the fashion offerings is M Dot Design Studio, Aquino’s own label: think crêpe de chine pleated dresses and a balloon-sleeved cropped blouse (a modern take on the traditional Filipino garment) featuring imagery of the famed Chocolate Hills in the Philippines’ Bohol province. And in a nod to the nearly California-sized Asian country’s oft-raunchy sense of humor, Aquino notes that the show also includes the wooden barrel men figurines that are a popular souvenir.

New, who’s based in Manila, tells THR that his site-specific “Aliens of Manila” installation at NoMad Hotel “relates to the migratory condition of most Filipinos.” The eye-popping exhibit (which currently has a sister show in New York at Pinto International’s gallery) features psychedelic pieces made from found plastic objects, such as an intergalactic canine and aquatic helmets crafted from colorful baskets and medical tweezers and sci-fi bodysuits made of flexible accordion piping. (At Tuesday night’s grand opening party atop NoMad’s roof, Heidi Duckler Dance Theatre performers sported the wearable pieces during a poolside dance number.) 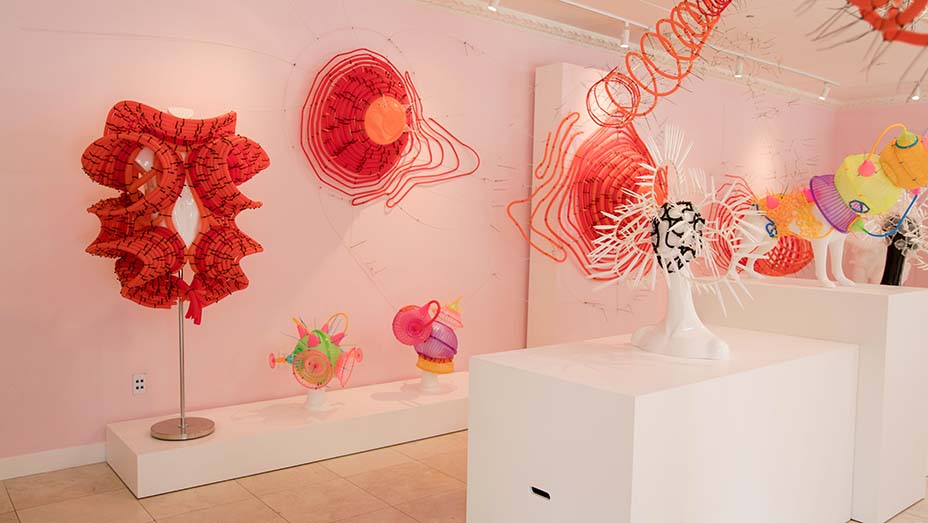 Also shoppable at NoMad’s gift shop are Samudio’s jewelry and luxe clutches by Neil Felipp. Reaching THR by email from the Philippines, designer Neil Felipp San Pedro explains that best-selling Crazy Rich Asians author Kevin Kwan “has shown so much love for our work that not only was the bag in the movie, it was also mentioned in the third book of the series, “Rich People Problems.”

Before a talent-scouting trip to the Philippines with Aquino and Please Do Not Enter co-founder Emmanuel Renoird in January, “we didn’t know what to expect because, as two French guys, we didn’t have any knowledge about the Filipino scene and we were curious,” said Please Do Not Enter’s other co-founder Nicolas Libert. “At the end, the challenge was to make the selection because there were so many potential designers and artists that we could show, and we had limited space.”

That’s why the exhibit also includes a showcase at Row DTLA during L.A. Design Festival from June 20 to 23, while NoMad’s The Lab will feature a new lineup of artists from July 9 to August 4.

PULO PROJECT – MAY 7 Susanne Verallo is a designer based in Cebu City, Philippines, with a Bachelor’s degree in interior design from the Univerty of San Carlos, and a Master’s degree in production from Domus Academy in Milan, Italy. Deeply influenced by her origins and her Italian training, Susanne’s namesake fashion label aims to take Philippines craftsmanship to the forefront, showcasing bold and daring creations that tell significant stories and stay true to heritage. As part of PULO Project by Michelle Aquino, Please Do Not Enter is proud to show a selection of the Susanne Vellaro collection. . . . #pleasedonotenter #puloproject #susanneverallo #jewelry #craftsmanship #conceptstore #philippines #pinoy #losangeles