As thousands of students showed up to March for Our Lives demonstrations nationwide Saturday, major figures in Hollywood also appeared to lend their support to the anti-gun violence demonstration.

Frances Fisher, who was participating in the L.A. march, told The Hollywood Reporter,  “I love kids and I want them to be safe. They deserve to have a safe place to study and learn and grow up. I’m with the kids. We have to ban assault rifles, and that’s why we’re here.” 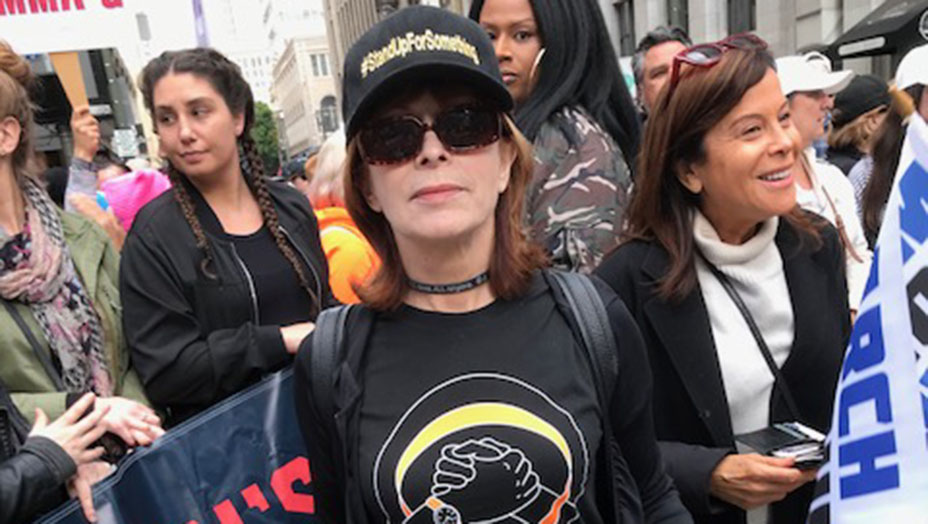 Laura Dern’s daughter Jaya Harper spoke at the L.A. march, and later told THR about the experience of going through lockdown drills in school and criticized the idea of arming teachers in school, which was raised by some after the Parkland, Florida, shooting.

“Change will happen. We have all fought very hard for profound change that we saw during the last administration that we cheered and wept for in the streets, but it’s getting pulled back,” Dern told THR. “To feel like we’re moving three steps forward and then 10 steps back is terrifying. But the groundswell in the streets of this generation feels like it is a paradigm shift.” 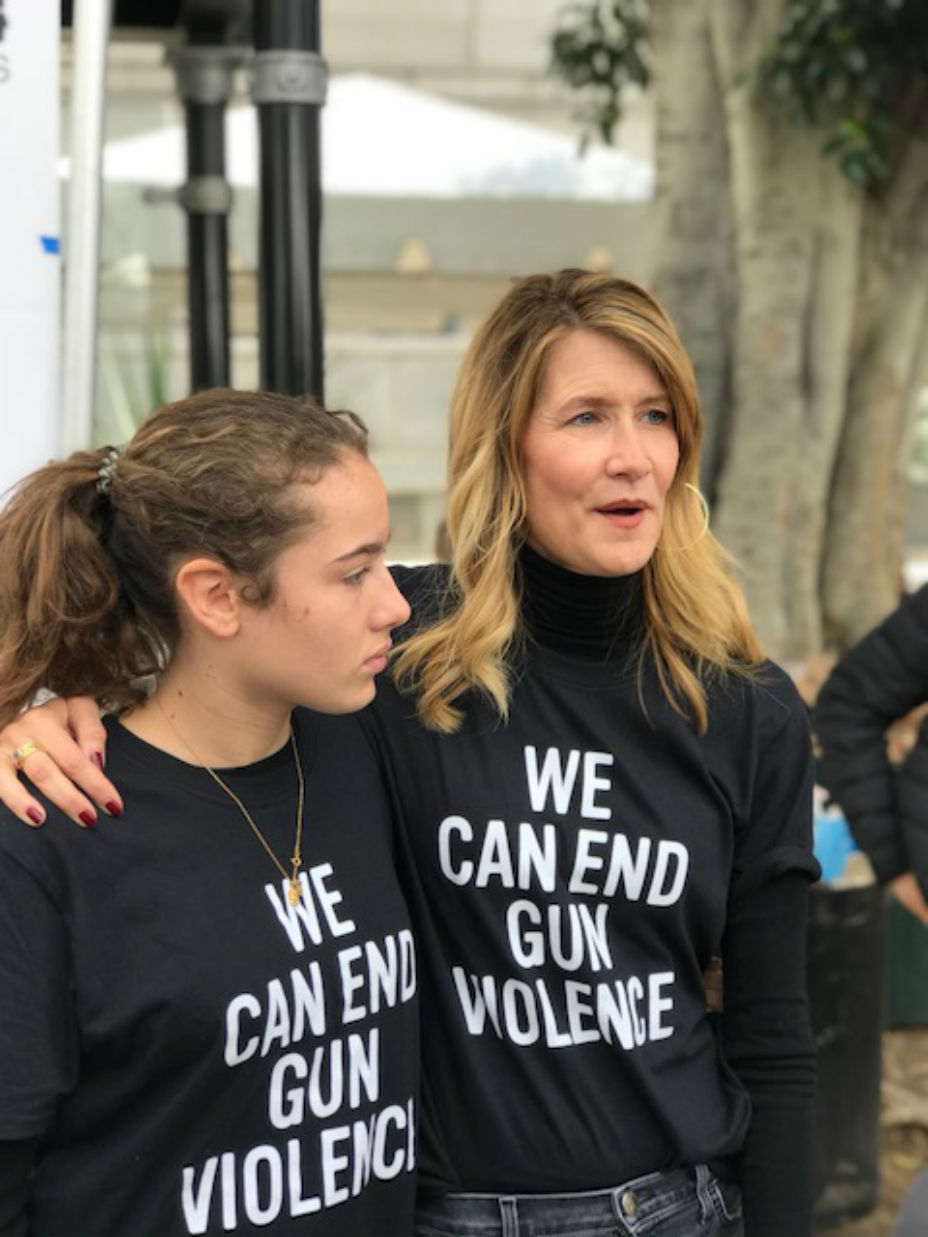 Connie Britton brought her son, who is in first grade, to the march. “He’s getting used to marching,” the actress told THR, “Today he was like, ‘This march is a blast.’ … I’m glad he likes it because it doesn’t seem like it’s going to end anytime soon.” The pin on her shirt, which said “Resist,” was a gift from Sophia Bush, she said.

Britton added that her message to the NRA would be, “Do you have children? Are you at all concerned about your children? Do you really feel what we need to have is an armed nation?” 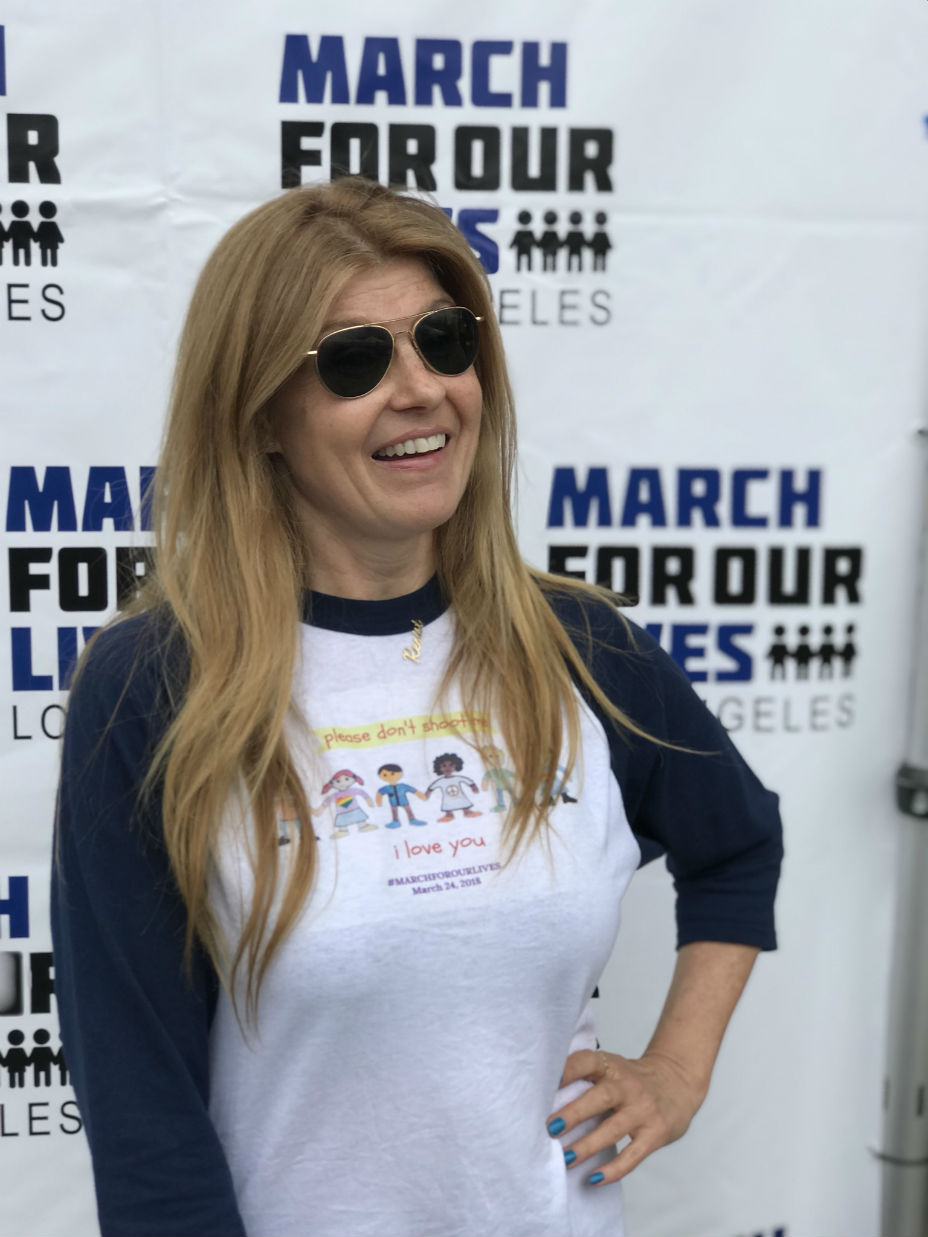 Ta’Rhonda Jones also attended the L.A. march and told THR that the marches personally resonate because she lost her 22-year-old brother to gun violence in 2014.

“I just want to know, how many more? You now have all these tragedies. We’re not safe in schools. We’re not safe in churches. In Chicago we’re not even safe in our homes. Bullets come through the windows. Where are we safe?,” said the actress. “I’m losing close friends. It’s become a pattern where people are comfortable with these things happening in Chicago. It’s like, ‘Yup, another one,’ because it’s so common. Killings are happening too often.” 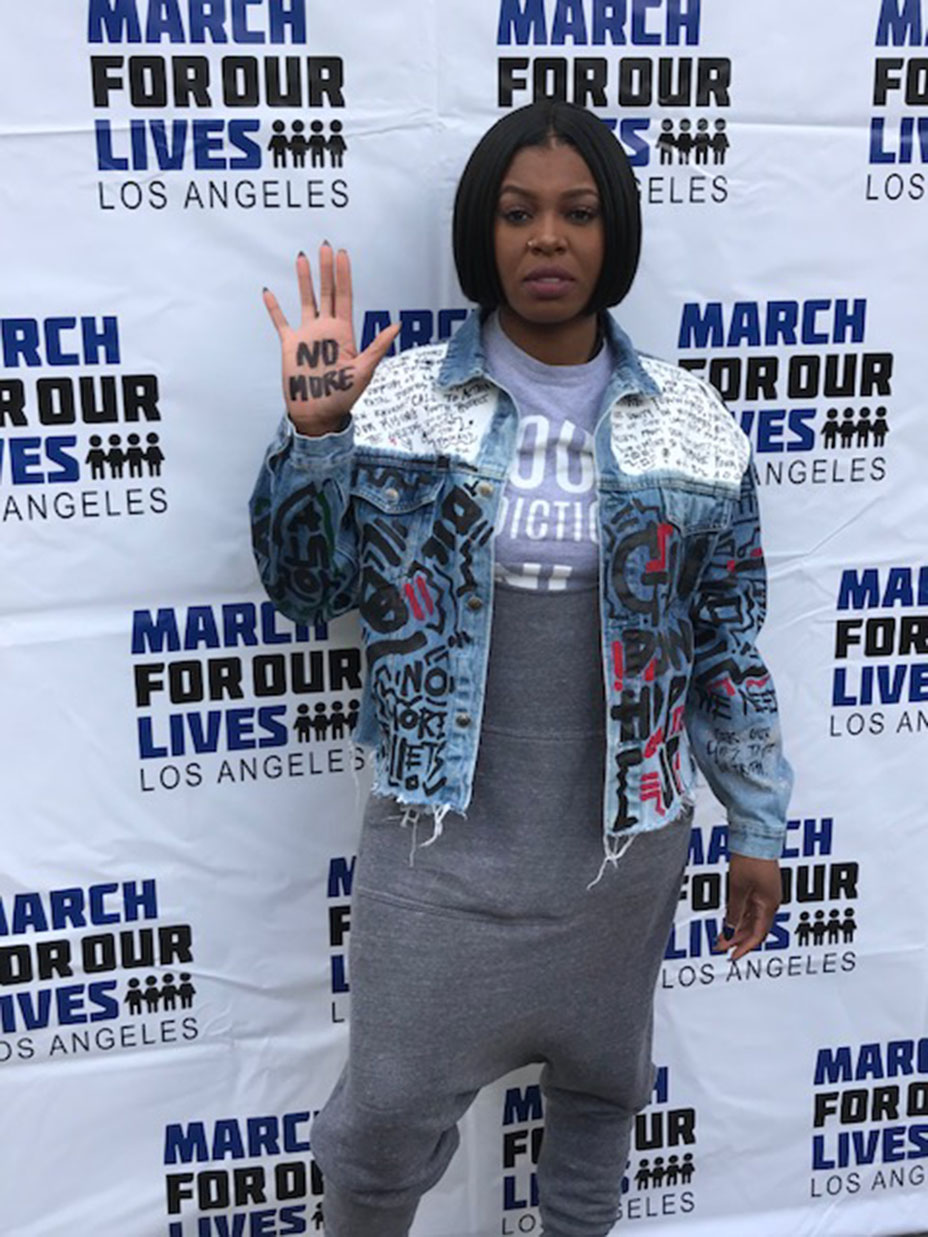 Backstage at the L.A. march, Kendall Jenner was spotted in conversation with Jaden Smith and wearing a denim jacket with a picture of President Donald Trump on the back which read, “God save us. He ain’t my president.” 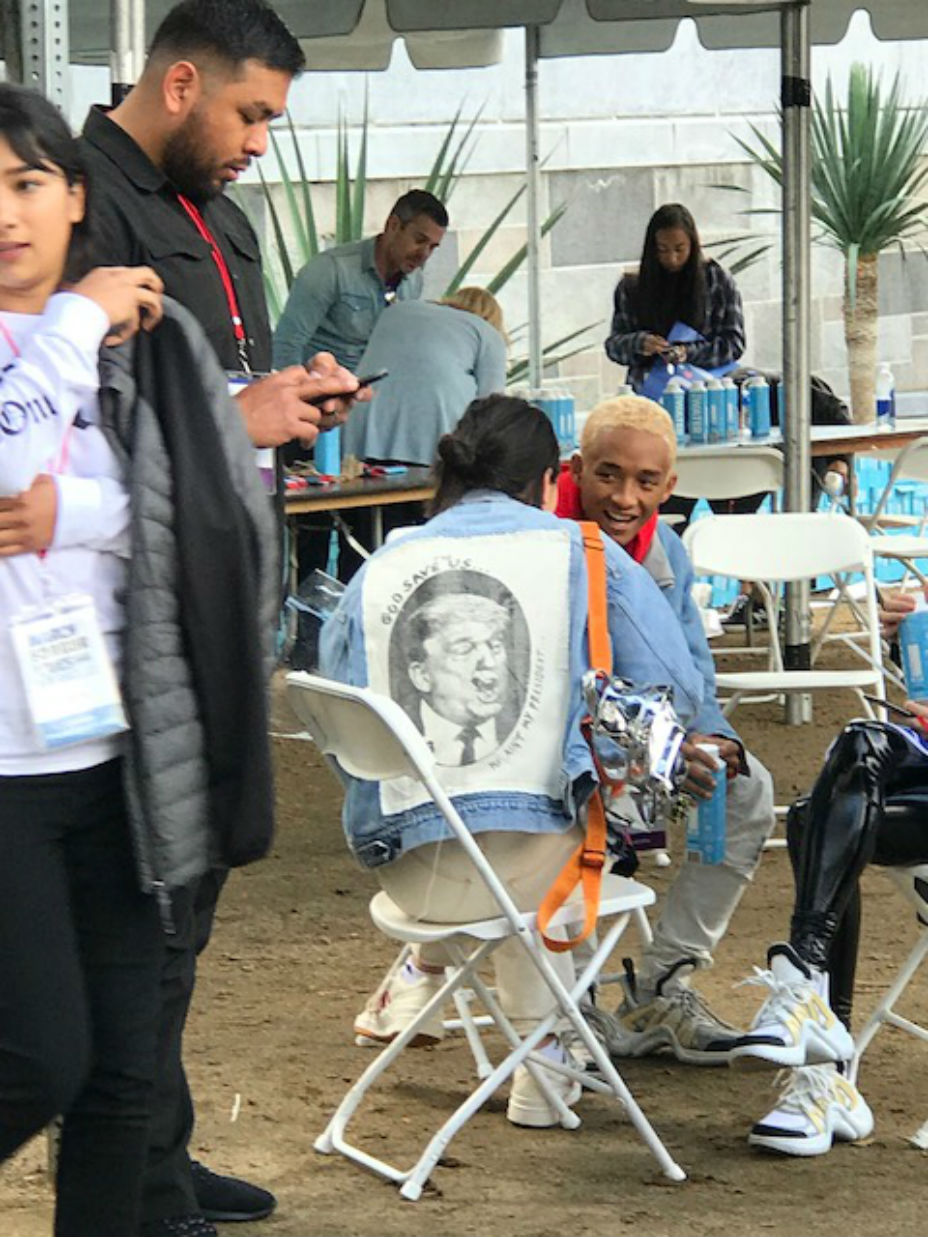 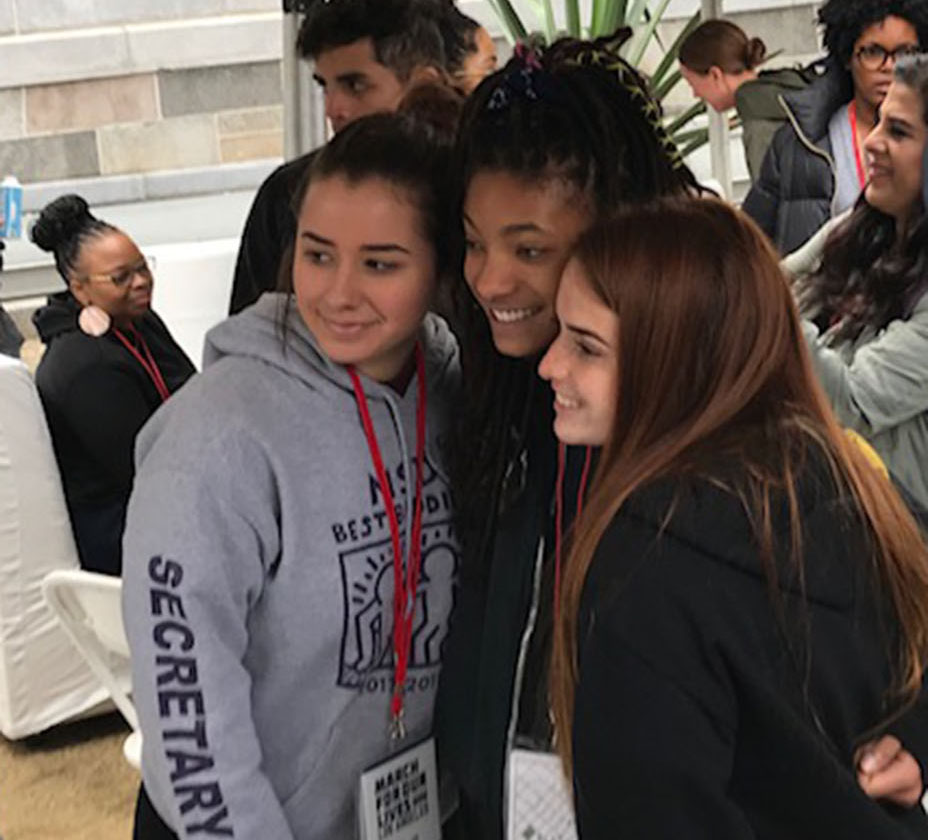 On social media, Offerman, who was attending the L.A. march, showed off a tee shirt reading “Don’t be a dope, vote like a Knope,” referencing his former Parks & Recreation colleague Amy Poehler’s public-servant character on the show.

Nixon ran into students from her alma mater, Barnard College, and Linde and a group showed off signs reading, “The Revolution is Now” and “I Think It’s the Guns.”

See more of the Hollywood stars participating in March for Our Lives event:

So ready to March today! Landed in DC w North & Kanye. We stand in solidarity with the survivors of gun violence & students who are calling for action on common sense gun safety laws at #MarchForOurLives around the country @AMarch4OurLives @Everytown

Heading to #MarchForOurLives in this charismatic blouse thanks to @ChrisAblesArt #LosAngeles
LET’S DO THIS pic.twitter.com/29jIdvwlKn

Ran in to a group of fellow @BarnardCollege alumni today at the NY #MarchForOurLives. Incredibly moved at how many people came out today to stake a stand for our kids and demand action against gun violence. pic.twitter.com/EaYhfpLmbG

We are here and we stand with our kids. @Participant #MarchForOurLives pic.twitter.com/85L93B3pI6

Surrounded by heroines! Lucky to be here at this moment in history with the ones I love! #MarchForOurLives pic.twitter.com/xVF4sDVofh

“When a gun has more rights than you” Today I stand in reverence of the students who’ve experienced such personal tragedy & used their voices to unite and action. Today we March For Our Lives. Today we reclaim our right to safety Hope you can join/support #EnoughisEnough pic.twitter.com/MIgci6GIa1

The next generation is shining bright. #MarchForOurLives

Hollywood's Stealth Support of the D.C. Gun-Control March: "It's Important This Not Be the Celebrity Show"