When it comes to black hair, it’s the best of times and, still for some, the worst of times.

On the upside, last July, the California legislature passed the Crown Act (Create a Respectful and Open Workplace for Natural Hair), which bans discrimination on the basis of hair textures. In August, Hair Love, about an African American dad learning to care for his daughter’s curls, screened before Sony’s Angry Birds 2, garnered 13 million YouTube views and nabbed an Oscar nomination for best animated short. “The reach is pretty insane,” says writer/co-director Matthew A. Cherry. “We started as a Kickstarter campaign.”

And yet, on Hollywood productions and photo shoots, many black actors continue to face challenges with their hair. In November, actress Gabrielle Union (an exec producer on Hair Love) claimed she was fired from NBC’s America’s Got Talent after being told that her hairstyles were “too black.” Other actresses point to the discrimination that occurs pretty much every time they sit in a hair and makeup chair: There just aren’t enough union stylists in Hollywood who know how to work with natural hair and darker skin.

“We’ve all cried in our trailers,” says Laci Mosley, an actress on Pop TV’s Florida Girls, who recently posted on Twitter about a bad makeup experience on a film set: “I’m a dark skin actress in Hollywood and like 3 union makeup artist[s] know how to do my makeup and they’re all busy as hell.” 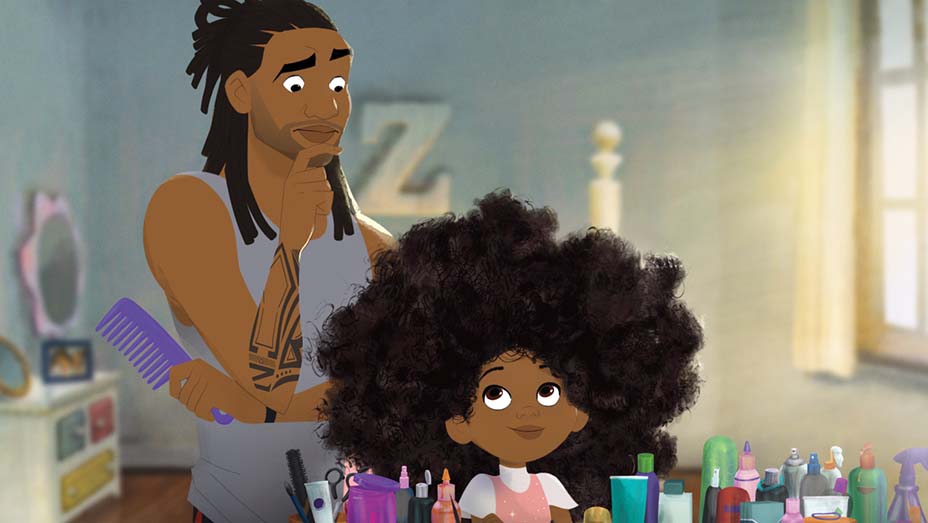 Mosley sees a problem stemming from a lack of union makeup artists and hairstylists that have a wide range of experience. “Everyone in the industry knows that there are certain barriers of entry when it comes to becoming a union makeup artist,” Mosley explains. “Unfortunately a lot of the people who spend the most time with black and brown skin find it difficult to get these opportunities because the [unionized] makeup and hair industry is nepotistic in nature. Friends are hiring friends, and when it’s an overwhelmingly white industry, nine times out of 10, those people’s friends are white as well.”

Adds Mosley: “This isn’t specifically for vanity. It’s the fact that systemic racism is so deeply ingrained in our industry that we are so forgotten about all of the time that this is normal.”

Make-Up Artists and Hair Stylists Guild business rep Randy Sayer says the guild “welcomes any and all discussions of ‘diversity’ within our entertainment industry” and looks to “renew our ongoing conversation with the producers/employers to ensure that the workforce that is hired reflects the community in which we live and work. We can all start to make simple, meaningful and demonstrative changes in the way we crew our departments, treat our co-workers and relate to others — to be as inclusive, diverse and forward-thinking as possible. ‘Diversity’ may be humanity’s greatest asset; our workplaces must reflect the best part of our society and our communities.”

Sayer also says the union’s barrier to entry isn’t that high: 30 days of union work within a one-year period. “No test, no swimsuit competition, no barrier because of gender, or ethnicity, or age, or privilege.”

In terms of increasing guild members’ facility with different hair and skin types, Sayer points to free training provided every other weekend in makeup and hairstyling techniques, including a recent “hands-on barbering class that featured cutting, clippering and grooming techniques for all hair types, open to 100 of our makeup artists and hairstylists.”

Empire star Taraji P. Henson is “tired of biting my damn tongue” on the subject, she tells THR, describing a magazine shoot in which a stylist inexperienced with black hair damaged hers with a root booster. She thought about asking for a different stylist, but “then I would have been difficult, right?” On another shoot, she says, a stylist bought a cheap wig and “didn’t even know how to style it.” She finally brought in her own stylist at her own expense. “But you see what I mean?” she says.

Insecure actress Natasha Rothwell says on some projects (her own black-led show excepted), she wakes up early to prep her own hair, anticipating that the stylists on set won’t know how to do it.

Early in her career, buying her own supplies often cost all of what she made in a day. For white co-stars, Rothwell says, “They can wake up, roll out of bed and don’t have to worry about what’s in their bag.

“It’s a real disservice to actors of color who are effectively doing someone else’s job and not getting paid for it,” she adds. “There’s nothing [more] dehumanizing than sitting in a hair and makeup chair and watching your co-stars go through the works and leave, and you’re still there because someone’s moving very slowly because they’re very scared. It’s [you] feeling like a problem to be solved.”

Rothwell says if a black actor is No. 1 on the call sheet, they can negotiate and get a “star request” to choose their own stylist, which is how several black stylists have broken into the industry and accrued enough days to join the union. “You have these big names, celebrities of color, who at that level can’t imagine doing the hustle,” Rothwell adds.

Henson believes it’s crucial to put aside egos and respect actors’ wishes. “If you know how to do it, great. If you don’t, pass it to somebody who does. It has nothing to do with pride or ego,” Henson says. “I’m not saying you have to be black to know how to do [that] hair, but you got to know what the hell you’re doing.”

Henson’s advice to networks, studios and magazines: “When an actress of color requests a hairstylist, listen to them. They’re not being difficult.”