Amid the coronavirus pandemic, Hollywood giants face a potentially huge earnings hit this year, and debt burdens are in renewed focus as ratings agencies are busy exploring or handing out downgrades.

Industry players are moving to preserve cash. AT&T, for one, shelved a $4 billion stock buyback deal to keep powder on its balance sheet dry, and Discovery tapped into a credit line to boost its cash position by $500 million, with other companies expected to follow suit in looking for ways to boost their financial flexibility by delaying or reducing expenses, possibly also staff, and possibly suspending stock buybacks and dividends.

Bernstein analyst Todd Juenger in a Thursday report wrote that he stress tested the balance sheets of ViacomCBS, Discovery and AMC Networks amid the pandemic. “Somewhat to our surprise, do not find any serious liquidity or re-financing concerns in the next five-plus years, even in our bear cases,” he wrote. “That does not mean, however, the leverage poses no concern. First of all, there are of course plausible scenarios much worse than our bear case. In any case, we expect future borrowing costs to be significantly higher leading to higher interest expense.” 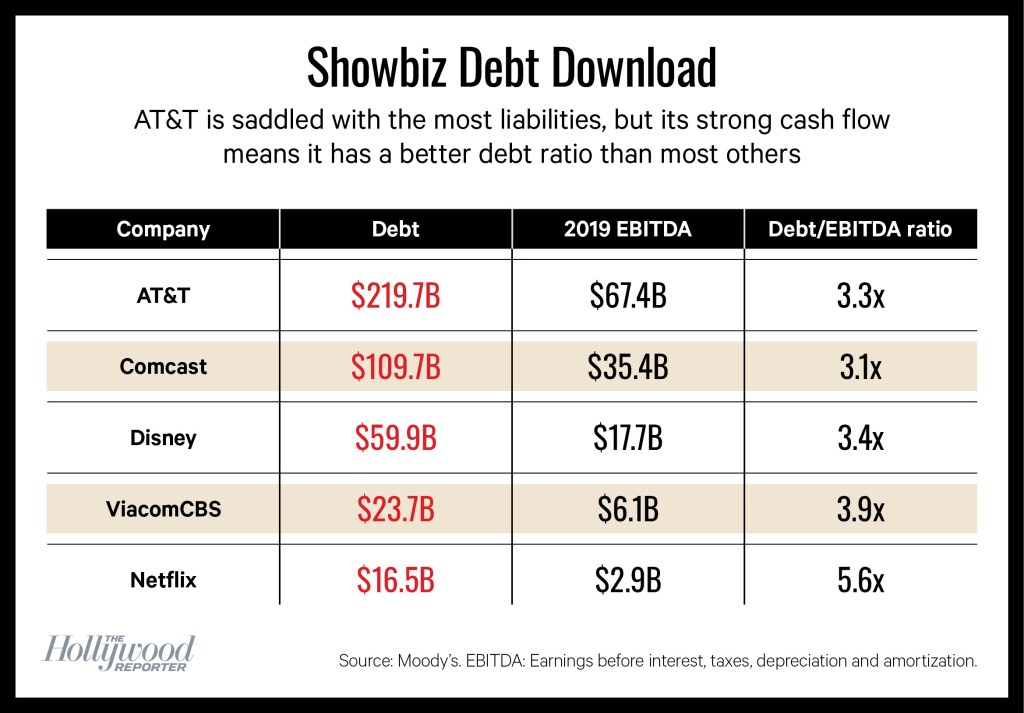 Who will be worst hit by the virus crisis? “The highly leveraged companies that are disproportionately susceptible to the shutdown of mass gatherings could be the most vulnerable to the COVID-19 outbreak,” says CFRA Research analyst Tuna Amobi. “That would probably include the movie theater chains, as well as live entertainment/events companies. … The longer the duration of the COVID-19 outbreak, which remains unpredictable, the more precarious its financial consequences will be for the entire industry.”

The big challenge right now is that noone has a real handle on the impact of the virus crisis or can predict how long it will continue. Disney, AT&T, Comcast and Discovery have come out, warning the financial fallout from the virus is hard to estimate due to a constantly evolving situation. While TV ratings are expected to benefit as people work and study from home, TV advertising is seen hard hit amid the pandemic and the widely expected recession that could follow.

“The ultimate scope of financial damage to the sector and the trajectory of any recovery remain highly uncertain,” wrote a team of S&P Global Ratings analysts on March 19. “A deep recession or long-lasting changes in consumer behavior may lead to sustained implications.”

Cowen & Co. analyst Dough Creutz in a March 23 report shared his guesstimates for the financial impact, cutting earnings estimates “across our media coverage space… In most cases, we are lowering earnings per share estimates by roughly 20 percent.” Notably, he also extended his cuts through 2022 “as a key assumption we are making is that the recession drives a permanent step-down in TV advertising.” Concluded Creutz: “Media fundamentals have been and will continue to be hit hard by the virus pandemic. We expect COVID-19 to trigger a recession that lasts at least until the fourth quarter 2020.”

Exhibitors are most at risk from high debt burdens and fixed costs, such as theater leases, while revenue is wiped out because of cinema closures.

Regal owner Cineworld, which ended 2019 with $7.7 billion in net debt, is the one sector company that has warned that it could potentially go out of business in a worst-case scenario that assumes a shutdown of all its cinemas for two to three months without a reduction of fixed costs, which are high for cinema groups, and no postponed movies hitting theaters later in 2020. Cineworld still plans to close its $2.1 billion acquisition of Canada’s Cineplex, and its debt scenarios include the latter, but one Cineplex investor has urged Canada to block the deal, arguing the combined group’s financial position could “quickly become extremely fragile.”

The following week, the company closed down its U.K. and U.S. cinemas and confirmed first U.K. staff reductions, which this week were changed to furloughs, without detailing numbers. Wall Street is prepared for the other shoe to possibly drop, with S&P analysts Scott Zari and Rose Oberman on March 18 downgrading their debt ratings on Cineworld, saying cinema closures will “deplete its liquidity and covenant headroom.” They said they would consider a further downgrade once they get “more information on the duration of the cinema closures and the cost-cutting measures that Cineworld will undertake.”

Among U.S. cinema giants, analysts pick out AMC, which ended 2019 with a $4.9 billion debt load, as most at risk amid a revenue hit and possible debt crunch. Case in point: its March 3 announcement of an 85 percent dividend reduction and a March 25 disclosure that all 600 corporate staffers, including CEO Adam Aron, would be furloughed. “Exacerbating concerns over coronavirus is the company’s high leverage situation,” Barrington Research analyst Jim Goss wrote in a March 18 report. Wedbush Securities’ Michael Pachter on March 20 cut his stock rating on AMC to “neutral” though, warning: “If closures last longer than we estimate, AMC would need additional relief from either government assistance, rent relief from landlords, or additional sources of cash in order to avoid a potential breach of debt covenants.”

Also seen as being at a higher risk is Endeavor, which in September withdrew the planned IPO that was supposed to help it reduce its $4.6 billion debt burden as of August. S&P’s estimate on March 16 was for a “mid-teens percent drop in events, media, and services revenue, as well as a substantial decline in UFC’s live ticketing revenue.” A downgrade would make debt refinancing more expensive and could pause any acquisitions. On March 25, Endeavor began laying off employees, starting with 250 staffers. 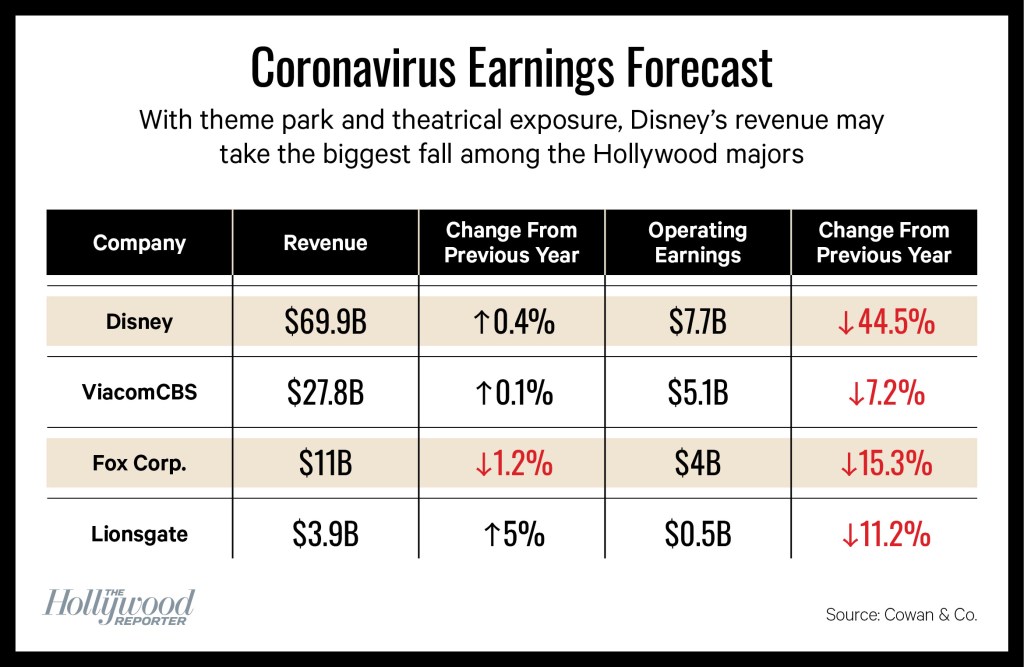 ViacomCBS, created via the recombination of Viacom and CBS in December, has the highest debt leverage ratio among Hollywood conglomerates, per Moody’s, and box office contributes more to its revenue than to anyone’s but Disney’s, per S&P. ViacomCBS controlling shareholder National Amusements in early March ended up in a technical violation of the covenant for a bank loan when the former’s stock price dropped below the minimum level required for shares held as collateral, with S&P saying it would review NA’s debt ratings. NA got a waiver until March 28 and as of March 24 was in advanced talks about amending a loan agreement. Former Wall Street analyst Hal Vogel predicts that the terms would likely be “renegotiated to provide some relief, but it is clearly uncomfortable.” ViacomCBS itself on March 18 delayed the sales process for its CBS Black Rock headquarters, which it hopes to sell for more than $1 billion, while predicting that a deal would close this year.

“The potential negative impact [of the pandemic] comes at a less than auspicious time for the integration of the combined company, potentially compromising some of its projected synergies and perhaps helping to explain the sharp decline in the shares relative to the industry and broader market,” Amobi says.”ViacomCBS could also face a potential delay, and/or disruption, in its near-term deleveraging targets in the wake of COVID-19, while the company aims to maintain its investment-grade credit rating.”

Meanwhile, Disney’s balance sheet is seen as strong, but its financials will be hit across more divisions than those of its peers; it operates film and network units (ESPN is facing double-digit ratings declines due to a lack of live sports), plus a big theme parks division, and has the biggest consumer products business. “In the near term, Disney is taking by far the biggest earnings hit due to their park exposure,” Creutz wrote March 23, cutting his current-year operating income estimate by 43.8 percent and revenue forecast by 13.8 percent.

Needham & Co. analyst Laura Martin on March 13 cut her earnings before interest, taxes and amortization forecast for Disney’s theme parks unit for the fiscal year by 4 percent to $6.8 billion, her cable networks estimate by 6 percent to $5.4 billion and her film unit forecast by 2 percent to $3.1 billion. On March 19, Disney launched a $6 billion debt offering, taking advantage of the Federal Reserve’s latest interest rate cut to boost its financial flexibility. Moody’s Begley lauds it for ensuring that the company “has significant liquidity,” adding the offering is “very smart. It’s like an insurance policy.”

AT&T on March 20 canceled a planned $4 billion stock buyback deal “to maintain flexibility.” Craig Moffett, analyst at MoffettNathanson, on March 19 said that the WarnerMedia owner could also face a decision about its dividend payments amid the pandemic and resulting recession. “AT&T’s exposure to cyclical businesses … poses an obvious threat,” he wrote. “Their ability to service their debt is not in question. In a serious recession, their ability to service their debt and their dividend is.” Cowen analyst Colby Synesael on March 23 also downgraded his rating on AT&T’s stock, citing such factors as the impact on WarnerMedia’s advertising and content business. The “incremental uncertainty,” he argued, was “likely to make it more difficult for the company to achieve its three-year guidance,” adding it also “now appears increasingly probable that the COVID-19 pandemic will affect the upcoming launch of HBO Max.”

And while many on Wall Street have contended that streaming services will benefit from people being at home, and one could argue that Netflix’s cash burn might fall as productions are delayed, the company is saddled with debt. Needham’s Martin in a March 10 report argued that “COVID-19 is bad for Netflix,” including its efforts to reduce its free cash flow losses. “In our coverage list, we worry most about Netflix, which has only $5 billion of cash on the balance sheet” and was expected to post about $3 billion in free cash flow losses in 2020, Martin explains. She added that the streamer might be forced to raise capital before the end of the year, warning: “If the equity and/or debt markets close for any extended period, this could represent a non-trivial problem for Netflix.”

This story first appeared in the March 27 issue of The Hollywood Reporter magazine. Click here to subscribe.

As a Virus Upends Hollywood, There May Never Be a Return to Normal