In mid-June, unions representing an estimated 17,000 Disneyland Resort employees banded together to delay Disney’s plan to reopen its theme park July 17. In a letter to California Gov. Gavin Newsom dated June 17, the Coalition of Resort Labor Unions, which reps Anaheim workers, expressed concern about “Disney’s rapid timetable” for reopening, claiming “there are numerous questions about safety which Disney has not yet answered,” including the logistics of routine virus testing for employees.

On June 24, the state suffered its highest single-day virus spike with 7,149 confirmed cases of COVID-19. That day, the Burbank-based conglomerate delayed its restart of Disneyland, noting that the state of California wouldn’t issue guidelines on a reopening timetable until after July 4.

“We can’t afford to get this wrong: Once the theme parks open, we’ve essentially opened California to the world, so it affects the whole community,” says Austin Lynch, director in Orange County for Unite Here Local 11, which works with nearly 3,000 castmembers at three Disneyland hotels and restaurants in the region. In Florida, Disney World workers are given thermometers and have to call in if they have a fever before their shift. Should they contract the virus, they will receive two-weeks paid for recovery. It’s unclear if the Anaheim parks will run by the same protocols.

Disney’s predicament may be a bellwether for Hollywood’s larger reopening plans. Technically, film and TV shoots in Los Angeles County could have restarted June 12, but many industry executives and producers are faced with a dilemma: Hit the gas and try to forge ahead with strict safety measures in place, or slam the brakes to avoid possible calamity. 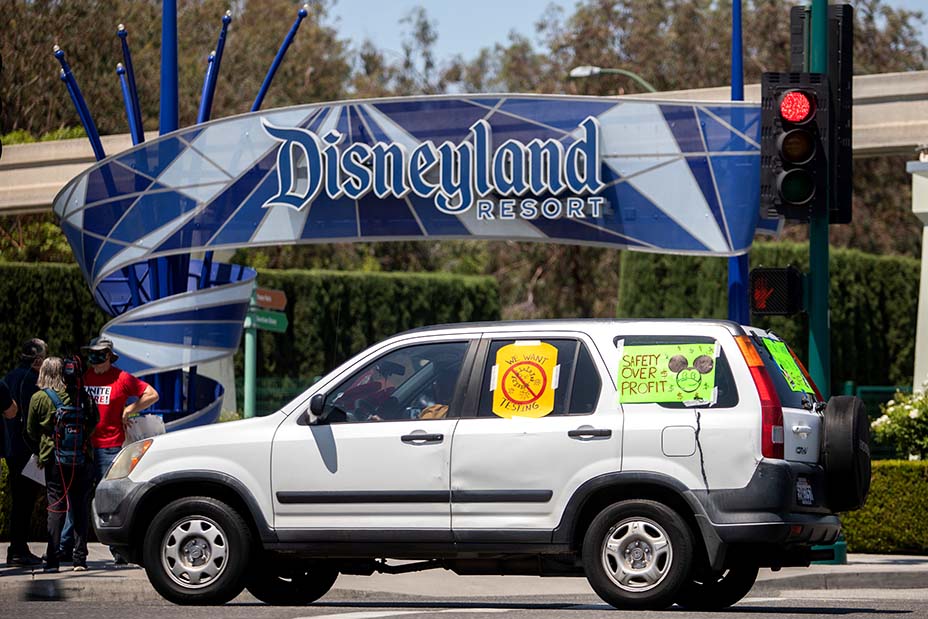 For now, the industry is indeed reopening — albeit at a slow pace. Los Angeles County is operating at around 20 percent of the normal volume of filming — and most of that is small commercials and still photography with only a few individuals on set at one time, according to the nonprofit FilmLA, which tracks project permits. Since June 12, FilmLA has been receiving around 60 film applications a week. Before COVID-19, the organization would receive anywhere from 60 to 80 a day.

“We’ve seen a real slow return in the two weeks that we’ve had so far,” says FilmLA president Paul Audley. And if the L.A. County Department of Public Health does pull back on the reopening, it’ll likely be because of hospitalization rates, not necessarily testing numbers. “We’ll take our guidance directly from the health department,” Audley adds. “If they think it’s time to pull back, we’ll let the industry know that.”

As of June 30, the L.A. County health department says film and TV shows are clear to shoot. “The industry is allowed to reopen in the county as long as all production adheres to the directives in the Health Officer Order and the protocols,” says a spokesperson for the department, in reference to the county’s “Safer at Work” directive on June 11. As of June 29, the county surpassed 100,000 total COVID-19 cases.

The biggest Hollywood productions are waiting it out for now, with sources noting that major films and TV shows don’t plan to start shooting in California until August at the earliest. Many industry observers forecast that production will happen in fits and starts until most studios become familiar with the new protocols. An exception, CBS’ soap opera The Bold and the Beautiful, which shoots on a soundstage at CBS Television City, is filming after briefly pausing in June because of the volume of testing it needed to complete for cast and crew. “We’re all sort of in the same place, which is that day to day, everything could change,” Audley notes.

In a sign of the financial hit the industry has taken amid the shutdown, on June 29 a number of Hollywood groups — including the Motion Picture Association, the Directors Guild of America, the Independent Film & Television Alliance, the International Alliance of Theatrical Stage Employees and SAG-AFTRA — called on Congress for new legislation to help save what it described in a letter as 465,000 film and TV jobs “at risk due to the pandemic.” The proposal included tax incentives to hire workers and increased tax expensing of production costs. 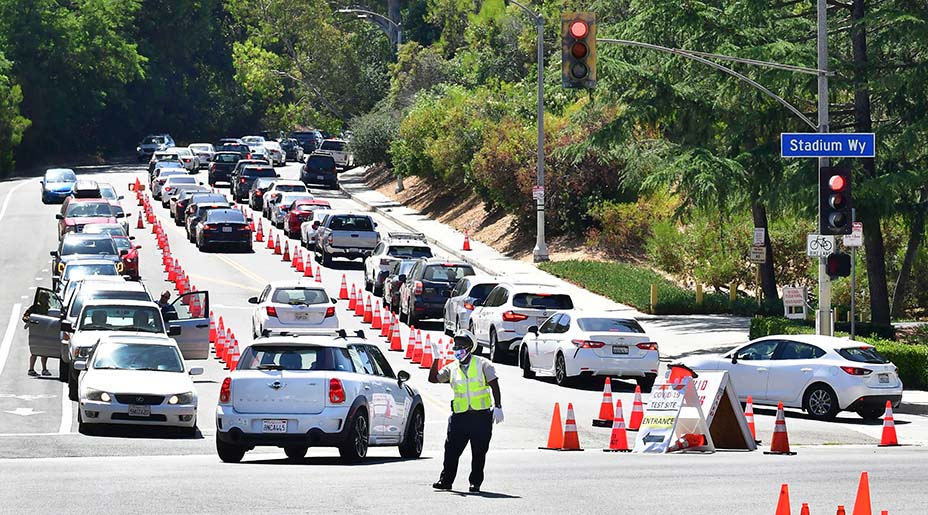 Even when on-set work resumes, it is unclear when audiences will return to theaters. Word of Disneyland’s reopening delay was announced the same June 24 afternoon that sources within the Disney film empire said that Mulan would no longer open in theaters July 24 due to the spike in COVID-19 cases in a number of states, including California. Two days later, Disney officially said that the release of the live-action adaptation was being pushed to Aug. 21. A day earlier, Warner Bros. likewise delayed the release of Christopher Nolan’s Tenet from July 31 to Aug. 12, dashing hopes for a July moviegoing revival and any semblance of a summer box office season.

In a mega-game of dominos, AMC Theatres, Regal Cinemas and Cinemark Theatres — the country’s three largest theater circuits — subsequently said they would delay reopening their cinemas from mid-July to the end of the July. Cinema owners say they are hard-pressed to justify the costs of flipping on the lights if there were no new Hollywood titles to play. And, in some cases, they don’t have the approval from state and local authorities to resume operation (this applies to L.A. and New York City, the two busiest moviegoing markets in the country). L.A. has become particularly problematic in terms of cases, with Mayor Eric Garcetti saying June 29 that he was taking a “hard pause” on the reopening of cinemas (which have been shuttered since mid-March).

The first two releases set to hit theaters post-reopening are smaller titles: Solstice Studios’ Unhinged, which has moved from July 10 to July 31; and Sony/Stage 6 Films’ acquired rom-com The Broken Hearts Gallery, which has moved from July 17 to Aug. 7. “The silver lining is that consumers understand the delay,” notes Paul Dergarabedian, a box office analyst with Comscore. Once theaters do reopen, there will be a number of safety measures in place, such as the chains’ mask requirement for guests and heightened sanitation efforts.

Meanwhile, Disney says it has reached an agreement with some union affiliates to recall furloughed workers to Disneyland park when a reopening date is identified. “The logistics in opening and staffing, as well as un-furloughing and then re-furloughing, is disruptive to all constituents,” notes Moody’s senior vp Neil Begley. “With some sports returning, and gradual improvement in economic activity, we expect the company’s media networks, especially ESPN to generate greater improved profitability regardless of the impact from a delay in the parks.”

For the moment, the Walt Disney World Resort is slated to be fully reopened by the end of July. The sprawling Florida destination will play host to the NBA and MLS when the leagues conclude their paused 2019 seasons in late July. (On June 26, the NBA revealed that 16 players tested positive in the league’s first round of coronavirus testing.)

CFRA Research analyst Tuna Amobi adds optimistically: “With Disney still on track for a phased reopening of its Florida park on July 17 on the heels of a limited reopening of the Shanghai park on May 11, this could provide some templates against which the company could manage its overall expectations as it continues to meticulously — and likely successfully — navigate a likely slow recovery toward a ‘new normal’ across its worldwide theme parks businesses.”

As Toronto Restarts Production, Strict Travel Orders Are a Barrier for Hollywood