“I owe $104,530 in student loans,” says Brian Kemm, an aspiring screenwriter who also works as a production assistant on a variety of film sets and as a bartender. “And it will be higher by the end of this call.”

Kemm, 33, is a part of a growing contingent of young professionals trying to make their way in the entertainment industry while contending with six figures’ worth of debt, illuminating Hollywood’s increasingly high barrier to entry. More than one-third of the American population between ages 25 and 34 carry student loans, which in the U.S. now total $1.6 trillion. The graduating class of 2016 owed an average of $29,650, up 132 percent from the average debt of the graduates 20 years ago (according to an inflation-adjusted analysis of a federal study). Meanwhile, entry-level Hollywood assistant positions commonly pay $12.50 an hour (California minimum wage currently sits at $12), with pretax weekly take-home pay landing in the $650 to $700 range. While these wages have remained relatively flat for the past decade, monthly rent costs have increased 34 percent from 2011 to 2018 (the median cost of rent in L.A. is about $1,370; New York is $2,150).

“There are assistant salaries that have not increased since the early ’90s,” says Liz Alper, a writer and WGA board member who started the social media movement #PayUpHollywood, wherein Hollywood assistants share their salaries and costs of living. In the name of transparency, under the hashtag, dozens of former and current Hollywood assistants offered up their salaries on Twitter, most in the $550- to $700-a-week range, adding that their workplaces rarely offered benefits nor overtime pay. They also outlined their work duties outside of the traditional rolling call and script coverage, including picking up their boss’ children from school, grocery shopping and “driving all around Beverly Hills to find his ‘misplaced’ Porsche.”

“I was shocked and not shocked to see that assistant wages were as bad as when I started as an assistant 10 years ago,” says television writer Deirdre Mangan (Roswell, New Mexico), who is working with Alper to shine a light on industry support staff wages and is herself paying off student loan debt acquired a decade ago from USC.

Though low wages and living on the cheap is a time-honored tradition for industry newcomers, the more than 40 recent graduates who spoke with THR say their debt is holding them back from advancing like their peers without student loans. Many note the irony of the situation given Hollywood’s recent push for inclusion. Student loan debt “becomes a question of access, and not everyone, especially minorities, have connections in the entertainment industries,” says a Latinx production coordinator for a major animation studio. Many express a belief that student debt only will exacerbate the industry’s lack of diversity, as those from low-income families who carry debt will be unable to sustain themselves on assistant salaries. “It has become a diversity issue and a class issue,” says Alper. Adds Mangan, “There is a small number of people who can afford to take that pay, and it’s rich white kids.”

The budgeting needed to pay off student loans prevents some from attending archetypal industry networking events or from taking “meetings” that require them to buy drinks or meals. “Going out for lunches, that’s not a thing at all anymore,” says literary and talent management company assistant Toni Baker. “I cannot feel good about going out and spending money that I know I don’t have.”

Individuals looking to work in creative fields add that, given the 50-plus-hour workweeks that are typical of lower-level positions in the industry and the side gigs that many must take to make ends meet while paying off loans, they feel they don’t have the time or funds to pursue projects that could get them noticed. “You can try to work your way up and make some allies and prove you’re a hard worker, but for a lot of successful creatives, they made their own path, they made something that was noticed and they went from there,” says Thomas Fatora, an Atlanta-based aspiring writer and operations manager at a studio who took out about $135,000 in loans. “That increases the level of difficulty of trying to make a low-budget project.”

To cut costs, several of the young entertainment professionals who spoke for this story choose to work outside of New York and Los Angeles in such cities as Atlanta and Cincinnati because of the lower cost of living. Others have developed side hustles: tutoring, nannying, shooting actor headshots, bartending and driving for Uber and Lyft. Still others have minimized lifestyle costs by selling off their cars and commuting by bike, living with several roommates in one-bedroom apartments in Koreatown or Glendale, or making meals out of the passed plates at awards-season events.

David, 27, a Los Angeles-based assistant for an A-list writer-director who asked not to use his real name, owes about $250,000 in undergraduate and graduate school loans. “It’s a scary thing, just sort of realizing there’s not going to be a big income change in the near future based on how the way that system out here functions for assistant-level people,” he explains. His backup plan is to move back to his parents’ home in New Jersey and teach.

While Hollywood can’t solve the nationwide student debt crisis, several companies are taking small steps toward addressing the issue. Last year, ICM Partners revamped its student loan assistance plan (the company had a tuition reimbursement program in its benefit package for years), bringing in an outside company, Vault, which includes a matching program where the agency pays $50 a month to assist in paying down employees’ loans. (This month, the agency doubled its matching allowance to $100 per employee.) “Affordability and financing student loan has become a big factor in who can come into our industry,” says Rick Levy, ICM COO and general counsel, who took out student loans himself. Currently 60 to 70 employees are enrolled in the new program. “Now we are looking to expand,” he adds. Since last year, Hulu also has offered student-loan-debt-burdened employees a monthly contribution to put toward the balance of their loan and help them pay it off faster. While Hulu would not comment, sources say employees receive up to $100 a month to pay off their principal loan balance for a maximum contribution of $6,000.

And many assistants who spoke with THR suggested other changes: that employers stop asking lower-level employees to put business charges on their credit cards to be reimbursed; that employees receive reimbursement for the use of a car, often required; that they receive overtime wages; and that salaries rise higher than the minimum wage.

While a possible Democratic presidential win could mean some legislative debt relief beginning in 2020 — Sens. Elizabeth Warren and Bernie Sanders each have unveiled ambitious plans to alleviate student debt — and a California minimum wage increase to $15 will take effect in 2022 for employers with more than 26 employees (and for all employers in 2023), most struggling with student loan debt are not counting on any relief coming from outside or inside Hollywood. “The current plan is to wait out my 25 years,” says an assistant at a big four studio. She is referencing a stipulation under the income-contigent repayment plan for federal student loans that allow for a borrower’s remaining balance to be forgiven after 25 years, if the borrower can prove a high debt-to-income ratio. Several sources with federal loans say that unless they somehow earn a major pay raise in the next few years, they also will wait.

But for many — especially those who took out private student loans — waiting only will mean falling deeper into personal debt. Fatora, who recently assisted a producer on Netflix’s Hillbilly Elegy, notes that he’s approaching a “breaking point” in his career — his monthly payments are about to increase — which he says will add to the stress of his financial situation. His message for the industry: “There are people here who are working hard, not just outsiders or hopefuls, but people who are inside the industry and are around the biggest productions who are just struggling to survive.” 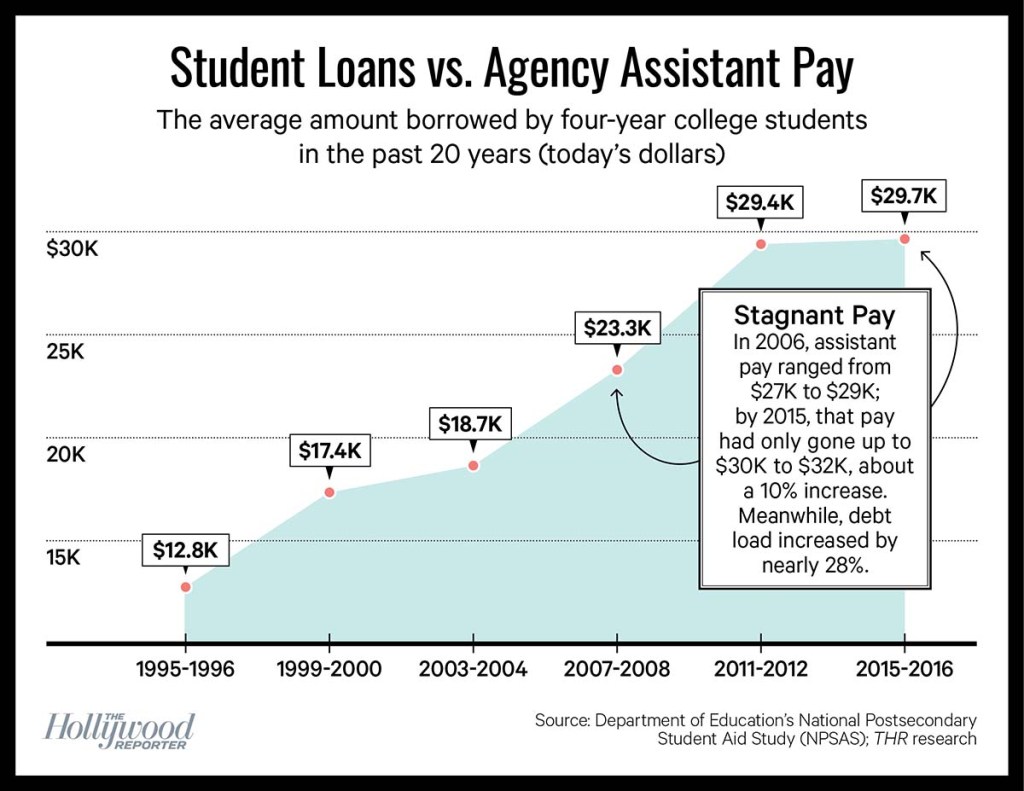