On March 12, Broadway shut down, leaving thousands of performers and stagehands out of work. In the aftermath, Madam Secretary actor Erich Bergen called Rosie O’Donnell with a plan to help those in need. “He said right from the get-go to do it as a benefit for The Actors Fund,” O’Donnell recalls. “They give you actual money so you can live. That’s what we want.”

But since the March 22 live-streamed event — which featured performances by Kristin Chenoweth, Tituss Burgess and Darren Criss and raised $600,000 for the fund — the number of Hollywood figures stepping up to assist less-fortunate industryites appears to have slowed even as hundreds of thousands of showbiz rank and file remain out of work. Per publicly disclosed individual donations, the entertainment industry’s one percent has largely prioritized giving to medical first responders or general coronavirus relief funds rather than its out-of-work brethren.

“The response has been slow from Hollywood billionaires, and that silence from them in many ways mirrors the silence and slowness that we are seeing from other types of billionaires in the country,” says The Chronicle of Philanthropy staff writer Maria Di Mento, who tracks donations in excess of $1 million. “But the stock market has been insanely rocky [with] deep, deep plunges. And so if they are bottom-line types, which unfortunately I think a lot of them might be, and if they have gotten hit, they might be focused on that right now, which is unfortunate.”

A few Hollywood individuals have written seven-figure checks in response to the coronavirus crisis, including Ryan Reynolds and Blake Lively. But those contributions have largely benefitted recipients outside of the industry (Reynolds and Lively split their donation between Feeding America and Food Banks Canada). Among the six-figure givers, Bob Iger, Steven Spielberg and Jeffrey Katzenberg each donated $500,000 to a government fund to help those in need in Los Angeles. And Comcast CEO Brian Roberts’ family gave $5 million to buy Philadelphia students laptops for remote learning amid the crisis.

How to Help Entertainment Professionals Affected by the Coronavirus (Updating)

By contrast, billionaires like Charles Cohen and Sam Gores are among the many moguls who have made cuts to their firms. Cohen furloughed a third of his 18 staff members at his eponymous production company while slashing the salaries of those remaining. Gores “temporarily” laid off up to 200 employees from Paradigm, prompting a lawsuit from longtime agent Debbee Klein. (Following Klein’s suit, Gores set up set a $1.1 million fund April 6 to assist those affected by the cuts and extended their health coverage through June.) David Geffen, one of Hollywood’s biggest donors to the medical community, has been publicly absent from coronavirus fundraising and instead took heat for an Instagram post musing about self-isolating in the Caribbean aboard his $590 million superyacht.

One studio producer says he is dismayed by the lack of philanthropy from Hollywood notables. “Isn’t this the time you actively say, ‘We’re going to do the right thing to sustain the livelihoods of the people who work for you?’ ” asks the producer. “If you have a hundred, $200, $300, $400 million, why don’t you actively contribute to the funds that are helping below-the-line people who made those movies and made you rich? This is Hollywood’s Bernie Sanders question to me.”

O’Donnell echoed that point. “Below-the-line crew have no income right now. Their lives are turned upside down. All these people who went from nowhere to showbiz, little Steven Spielberg in Arizona, you know? It would be a mitzvah, why wouldn’t he [help those in his profession]? And why would he think that half a million is enough?”

The noticeable void has left a few entertainment giants like WarnerMedia and Netflix to pick up the slack. Both have set up $100 million funds to assist their out-of-work crewmembers. In the case of WarnerMedia, below-the-liners who work on productions from WB, HBO and others under the corporate umbrella need not apply; the company will pay them in “normal” course. Ditto Netflix. Sony also set up a $100 million fund, but only a third of it is specifically earmarked for members of the creative community.

Still, those who don’t work on a Netflix or WarnerMedia production are scrambling to make ends meet, relying on government assistance that is slow in coming. Several described the experience of applying as a Kafka-esque nightmare. One New York-based TV director of photography, who hasn’t received a paycheck since March 28, tells The Hollywood Reporter that he has been unable to get through to file a claim on the state’s unemployment help line, beginning his effort daily at 7:30 a.m. and dialing in 200-plus times in a row. On one occasion, he reached an automated voice greeting message and thought he had finally succeeded, only to be kicked out of the system at the following prompt. Efforts to reach a human representative were futile.

Film and TV crewmembers typically receive hourly or day rates instead of a lump sum and earn less than above-the-line roles like directors, stars and producers. In general, they do not receive health care from the production companies they work for, nor do they receive paid sick leave.

When a film shuts down production, as has happened across the studio landscape, few keep getting paid beyond the producers and department heads and perhaps one level below. The same is true for the thousands of Broadway workers reeling from the shutdown. In response, the Michael Jackson Estate made a $300,000 donation, a third of which is earmarked for Broadway Cares. (MJ: The Musical was scheduled to open on Broadway in mid-2020.)

“The reason we announced it was to encourage and inspire other people to do the same,” says the estate’s co-executor John Branca. “I’m not here to preach, sermonize, moralize. We wanted to do what’s right and try to help out the people in the communities that Michael and his legacy thrive in.”

And as the sports industry has shut down, so too has television’s sportscast workforce. IATSE estimates that virtually all of TV sports broadcast employees including technicians are now unemployed. Fox, ESPN, Turner, CBS and NBC committed to paying production crews hired for canceled NCAA basketball tournaments, PGA Tour events and some future competitions through mid-April.

What will happen after that is unclear. But others have offered little assistance to their struggling contract workers. Sinclair Broadcast Group only offered to loan its broadcast employees up to $2,500. Fran O’Hern, co-director of broadcast for IATSE, blasted Sinclair, describing the move as “doing the least for their employees.”

The grim outlook for many in the creative and entertainment community has prompted smaller organizations to step in. The Tribeca Film Institute, a nonprofit that is run separately from the for-profit Tribeca Film Festival, recently launched the Emergency Artist Support Fund to pay for basic needs during the crisis.

“There are a lot of myths around independent filmmakers. In reality, you defer your own fee or you cut your fee in half when you have to finish the film,” says TFI executive director Amy Hobby. “It doesn’t go through payroll, so you don’t have those unemployment benefits, you don’t have health insurance. There is really zero safety net.”

For her part, O’Donnell is planning another live-stream fundraiser. “We have proposed to my agent to go sell it as a show to one sponsor or, if possible, five sponsors, like to come in at $100,000 or whatever and you’d get to sponsor that episode,” she says. “It won’t be in a studio with me in hair and makeup [like some of the other recent celebrity-driven efforts]. The world has changed.” 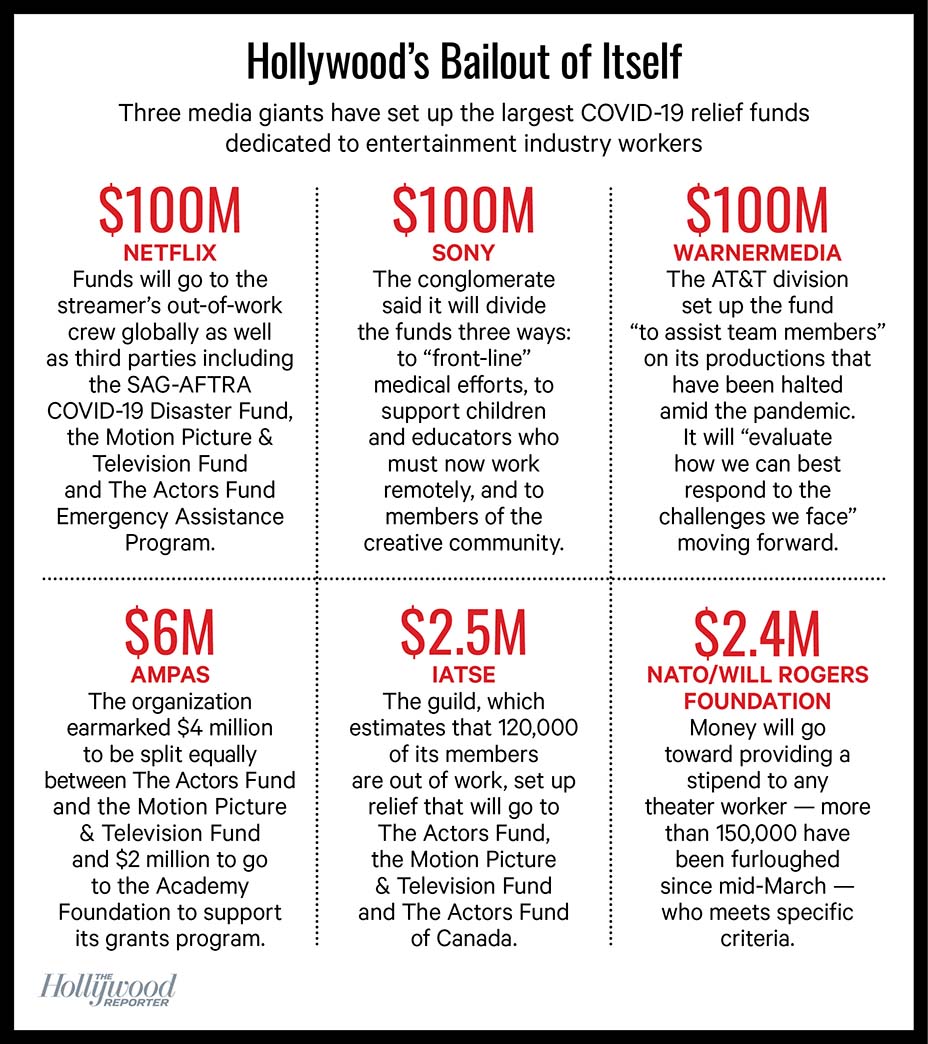 As a Virus Upends Hollywood, There May Never Be a Return to Normal