Drew Pearce is a veteran of crafting crowd-pleasing studio films, but with Hotel Artemis he’s doing something a little more intimate that intentionally is rougher around the edges.

The Scottish screenwriter behind 2013’s Iron Man 3 (which earned $1.2 billion globally) and 2015’s Mission: Impossible — Rogue Nation ($682.7 million) steps behind the camera for the first time to create a stylish, high-concept action film that’s as idiosyncratic as the ’80s projects of Walter Hill and John Carpenter he came up loving. The film takes place in the near-future Los Angeles and centers on a nurse (Jodie Foster) who runs a top-secret hotel for criminals, where they can go to lay low and get patched up after scuffles with the law. There’s a sense of anxiety in the film — both personal and societal — which is set against the backdrop of a water riot as people react against the privatization of water.

Pearce, who also penned the script, notes that working on big-budget tentpole movies comes with constraints he did not have to navigate here.

“You do have to create a base-level movie that will appeal to everyone,” he says, adding he doesn’t mean that as a criticism, as you can make great films under the studio system.

But with Artemis, there was a freedom in not having to appeal to everyone.

“I purposely wanted to make a movie that was one person’s favorite film, rather than lots of people’s OK film. I’m hoping that’s what it is,” he says.

Pearce first scribbled the idea “secret hospital for criminals ” into a notebook back in 2011, and the idea slowly grew as he penned big-budget features. Foster was the first person to sign on to the project, and he’s still not sure how she got ahold of the script. Soon the sprawling cast assembled, with its ranks including Sterling K. Brown, Sofia Boutella, Dave Bautista, Charlie Day, Jeff Goldblum, Brian Tyree Henry, Jenny Slate and Zachary Quinto.

In a conversation with Heat Vision, Pearce recalls the day in pre-production that nearly gave him an existential crisis and the moment he knew Dave Bautista was the right actor for one of the film’s most demanding roles.

Sterling K. Brown is in the upcoming The Predator. He wants to play Green Lantern. Is the leading man/action hero something you saw in him, perhaps before others new he was an action lead?

I don’t think there’s anyone who can watch Hotel Artemis and not instantly see that Sterling is ready for whatever the leading man movie equivalent of primetime is. He just exudes star quality. He does that incredible thing where he controls the space around him. He walks in a scene and you are looking at Sterling.

Dave Bautista has challenged himself in roles we’ve seen lately, and this is one of his most nuanced. How did you cast him?

What I do think he gets to do in this movie is show massive gamut of range, and he does it essentially in a double act with Jodie. And that is both very effecting and humorous but also hopefully at the end quite touching, as well. When I was casting Everest, the character that Dave plays, I spoke to Jeremy Latcham, who produced the first Guardians and I said to him, “I’m from England, so I don’t know from The Bautista era of things. I think he’s great as Drax. Do you think he can do this?” I told him about the movie and the role and it was actually Latcham that said, “You’ve got no idea how much Dave can do.” he said “In a movie full of MVPs, he will rise up and be the alpha MVP.” 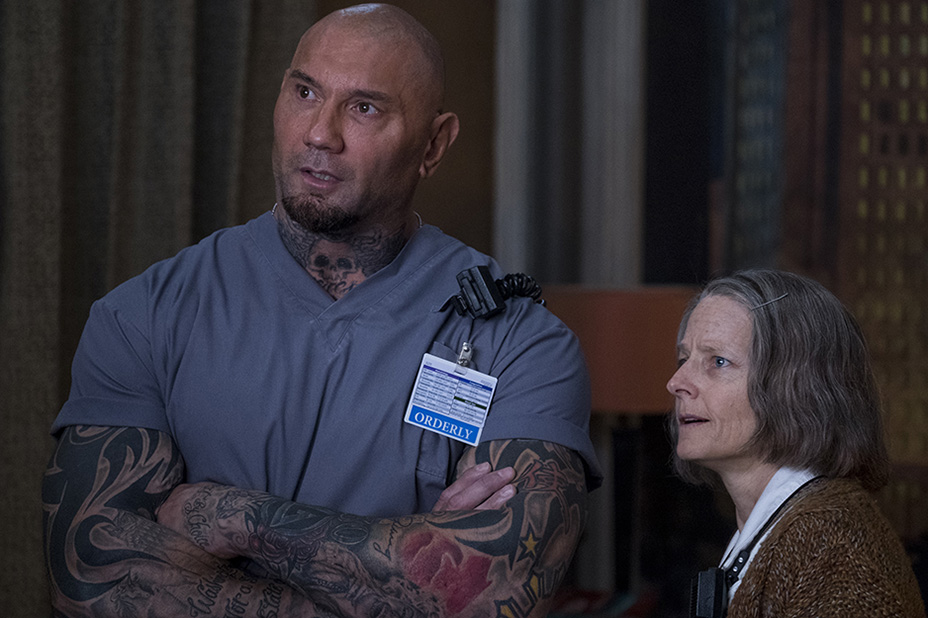 You’ve spoken about loving Walter Hill and John Carpenter’s work. How did they influence this?

We are a week-and-a-half out of shooting. It’s a first movie. There’s a lot of pressure. It was an incredibly complicated movie to have a cast like this on a small budget as an indie. And so I’m driving from a scout in downtown back to my offices on Gower and I was listening to I think it was the Bret Easton Ellis podcast. It was an interview with Walter Hill. “This will steady all of my nerves. Just listen to Uncle Walt.” It was right toward the end of the podcast and Bret Easton Ellis asked him a question which was like, “What are you most glad for in the world?” And Walter Hill said, “that I never have to make my first movie again.” I remember just sitting there at the steering wheel just thinking, “Oh God. What have I done?”

What were some of the challenges of shooting this film, particularly the climax?

You are making it with limited means, but I wanted there to be a sense of opera at the end of it. If not necessarily in scale, then at least in emotion, and visually and I wanted there to be a catharsis to the end and sometimes the only way you can do that is shut down a whole city block in downtown and set it on fire and put people with blue face paint in it and have them smash the place up.

Iron Man 3 dealt with anxiety, and so does this film. Where does that come from?

I hadn’t joined those dots, but I do think there’s an interesting line to draw between them, which is the cages and the boxes that we put ourselves in. Anxiety is a big part of that. There’s a reason that the working title for Iron Man 3 was Caged Heat. Which then actually got subbed down to Caged because the reference to women in prison exploitation movie wasn’t deemed entirely appropriate. I think in the same way that Tony is in this trap of his own making emotionally because of what he saw in the Battle of New York and his own issues with the idea of himself as a hero, those are all this cage he’s made for himself. I think the nurse in Hotel Artemis has the same. I think her cage is an emotional one due to a tragic event that we discover throughout the movie, and it’s the reason in the same way Tony only feels safe in the Iron Man suit in Iron Man 3, the nurse only feels safe in the Artemis.

There’s a surprising sweetness to this movie, particularly with the Nurse and Bautista’s character.

There is a lot of the nurse that oddly has some elements of Disney. She definitely has that Wendy in Peter Pan aspect of her and her lost boys. Chung-hoon Chung, who was the cinematographer … one of the things always talked about was Mary Poppins. The nurse is this lady who has her little bag and there are a few shots in the movie that are directly Mary Poppins-inspired.

Are you still interested in big studio projects after this? Would you consider directing one?

I obviously have the taste now of being able to write and direct something that I can very much control the voice of. But I also love the giant train set that is working on a huge studio movie when you are working with the right, simpatico people. There’s nothing in the world as satisfying as being in the Arclight or Gloucester Square in London on a Friday night in a packed crowd when they see your movie. I remember the Mandarin reveal in Iron Man 3; I couldn’t be in enough theaters to watch that. I didn’t want to watch the rest of the movie, I’d seen it a billion times, but I just wanted to see the Mandarin reveal in as many theaters as I could. I’m going to continue, hopefully, to work in the studio system. And work on big projects, both as a writer and as a producer and maybe at some point directing my own writer-director project joins up with the studio stuff, or maybe they stay as two separate things. Some of my favorite writer-directors have quiet, secret lives working on some of the biggest movies that you never know they worked on.

That’s the funny thing, sometimes 20 years later you might find out someone helped with the script on a big movie and we never knew.

Or actually, kind of wrote 80 percent of it. Often I think they don’t fess up to it, not because they are somehow hiding from it. Often it’s in deference to the first writer. I certainly know when I do a job like that, I’m coming in to help rather than coming in to own it. Being a writer-director of your own stuff you create allows you to do that as well, because ego-wise A) you know how tough it is to be the director of a movie, and B) you don’t need to sate the act of ownership by coming in on one of those films. Feeling like you need to take it over. What you do is you come in and you become part of a team, particularly if you are only around for a short period of time and you help everyone get to the movie they want to make. I come from working class, Scottish, Methodist roots. There’s a satisfaction in a job well done and helping other craftsmen build the house. 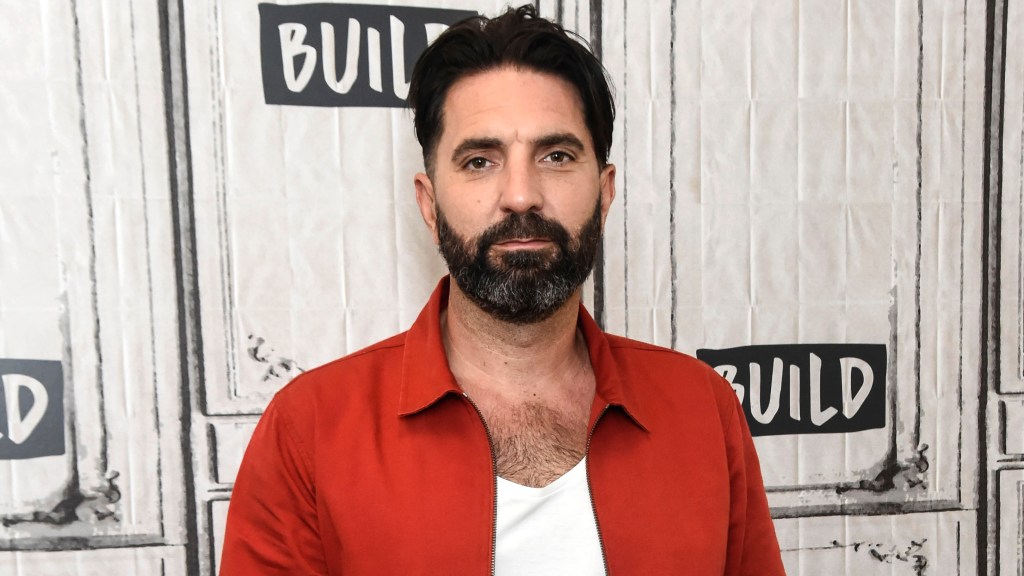 Hotel Artemis is in theaters now.

How Sofia Boutella Is Redefining Her Action Stardom