When Hounds of Love premiered in Venice, it earned rave reviews, but also inspired some members of the audience to walk out of the theater.

Though it’s been loved by critics (Hounds of Love holds a 100 percent rating on Rotten Tomatoes), the challenging subject matter isn’t for all viewers. The film takes place in suburban Perth, Australia, in the 1980s, where twisted serial killer couple John (Stephen Curry) and Evelyn (Emma Booth) have been kidnapping and killing young women. Vicki (Ashleigh Cummings) is abducted by the pair and must fight for her survival.

For the film, writer-director Young took inspiration from real-life accounts of long-term captivity and, because of the film’s small budget, was forced to be creative not only with how he shot it, but also in how deeply he imagined the characters, who had to be interesting enough to carry a movie that largely takes place inside just a few rooms of a home.

Young was surprised by the acclaim the film has received, and how the positive reaction from Venice quickly led to a furious round of calls from Hollywood players courting him for work. Young recently took time out of his packed schedule to speak with Heat Vision by phone from the Serbian set of his next feature, Extinction, an alien invasion movie starring Michael Pena.

What was your reaction to people walking out at Venice? There’s not much violence shown in this movie; it’s mostly suggested.

I think a lot of people just get tickets with no idea of what they’re watching. I did notice most of the people watching out were assisted walking out by a walking frame and had very gray hair or no hair at all, so I think it was just a matter of them not knowing what they were in for. Even though the film doesn’t show much, it’s not a very nice subject matter, and I tried to make the film pretty tense. I think that’s what got people more than anything. I’m lucky enough to have been in screenings all around the world now, and I’ve never seen anyone walk out after Venice. After the first reviews came out and people got a better sense of what the film is, I think those that were likely to walk out, probably avoided it before.

How did you figure out what little quirks to give these people, especially the captors? They are sick, but you understand their perspective.

It was so hard. I wanted to make a film, and I thought, “Right, who is going to give me money to make a film? Probably no one, unless I can come up with an idea that is really simple and cheap to execute.” I had to spend a lot of time on thinking how to make this thing interesting if it’s in just one house. The only way to do that was the characters. I just spent longer working on them than on any other part of the screenplay, thinking about their relationship and reading books on the psychology on the kinds of people who have been involved in those situations and just stealing any particular quirk I could find.

Stephen Curry got cast six to eight months before we starting shooting, so we had a lot of dialogue on the phone and swapped a lot of articles. He’d email me and go, “I read this article, do you think this is interesting for the character?” I’d say, “yes!” or “no!” we just had a lot of time to develop what worked and what didn’t work.

How much was budget in mind as you were writing? Did you have to cut anything when you got to set?

We brought the whole thing in for exactly the right amount of money, the amount that we had. We only had 20 days to shoot it. In Australia, we have 10-hour working days. In the states, it’s 12. It’s the equivalent of 15 days in the states. So we just gave ourselves some rules. Some specific scenes, we identified before we shot, we’d go, “All right, we’re just going to shoot every character on one lens and we’re not going to shoot them any tighter or any wider than this one particular lens.”

The entire movie isn’t in the house. We get out to see the victim’s family, which makes the movie less stressful in a way. Did you always conceive of the movie including scenes outside the home?

I think in the original draft it was all set in the house, because that was the cheapest way to write it. But then, as it looked like the film was going to get financed the proper way, when I realized it was going to have a little bit more money than I suspected, it became evident it was going to be just too much [stress] to stay in the house the whole time. That was something that actually came together toward the end of the writing process, probably in the last two or three drafts.

You studied real-life events. How did you make sure this movie was respectful?

As a filmmaker, it’s so much work to make a film that you’ve got to make something you’d want to watch. I like tense movies, but I don’t like violence. There’s a particular trend of gornography going around. That to me is not good filmmaking or clever filmmaking. Anybody can go and buy some pigs guts and put them all over a woman and show that. There’s nothing clever about that or tense about that. What I find most tense in film is — it’s not about what does happen, it’s about what can happen. That’s where tension comes from. I almost did it as a challenge to myself, to see how tense I can make this without showing anything, and I think in hindsight I look at it now and think, “If I could go back again, I’d probably show even less.” 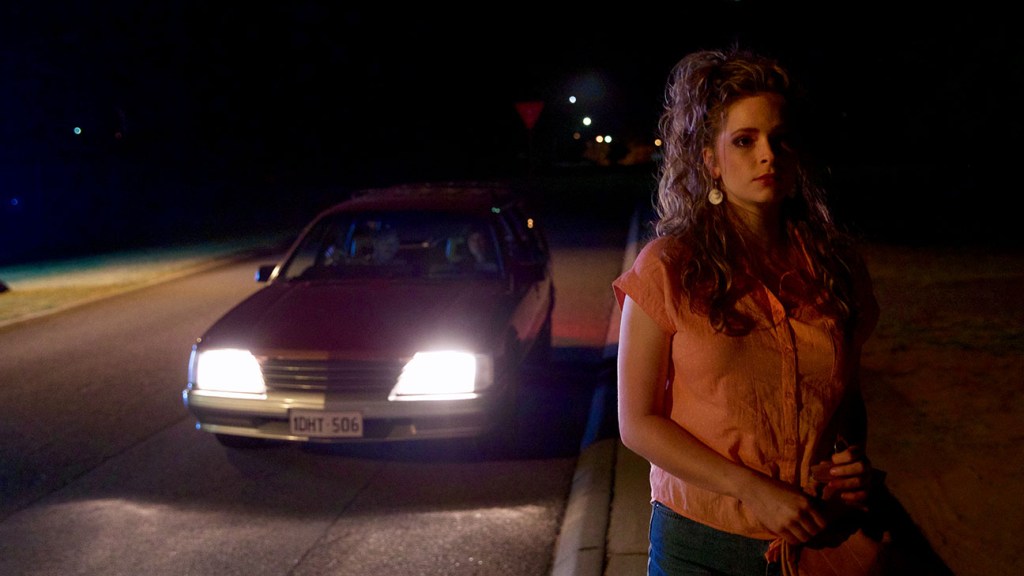 It’s getting great reviews. It opened doors for you. How did you decide on your next project?

I was really lucky. A really good buddy of mine, who I went to film school with, a guy called  Zak Hilditch. He paved the path for me a few years earlier with a film called These Final Hours. He was my shoulder to cry on and my voice of reason throughout the whole process of Hounds of Love. And he ended up with an agent and a manager after that. I met his manager before I made Hounds of Love, and we just got along and became buddies and started talking.  He came on board as my manager before he’d even seen Hounds of Love, and I think he was as surprised as I was that I got the reviews that I did out of Venice. He helped me pick an agent, he helped me sort through the projects that I wanted to do.

How do you describe your next film, Extinction?

It’s like nothing I’d ever read before. It’s a sci-fi family drama. It’s about a guy trying to redeem himself within his family in the midst of an alien invasion.

I imagine it’s a bigger budget but bigger headaches?

Yeah. I’m in the middle of shooting it right now. I’m in Serbia right now. We’re seven days into the shoot, and I was just talking to my buddy on the phone earlier. She asked me the same questions. “How is that?” I said, “It’s exactly the same except there are a lot more people willing to help you.” That’s how it is. We were picky with who we work with. The actors had to be actors who were good people and good collaborators. It’s a lovely experience. The producers couldn’t have put together a better cast and crew. It’s really similar to Hounds of Love, except we get to blow shit up.

First movies are special, because you may never make another on a budget so small. Have you given thought to how in your filmography, Hounds of Love may be the smallest movie you do?

Because I got to write it myself, that was really special. And it made the whole experience different. My passion is independent films in the vein of Hounds of Love. That’s what I enjoy and watch the most, so I want to keep making them. Just depending on where I get pulled. It’s very difficult to say no if an amazing project comes your way. I was fortunate enough with Extinction, and that was such a good project I couldn’t say no. But I’ve got a few ideas brewing away that are just as small for Hounds of Love, and I wouldn’t want to make with a big budget and just want to make in the same way.

Hounds of Love is in theaters and on VOD Friday.