Everyone connected with Thomas Vinterberg’s Oscar-winning dramedy Another Round has a drinking story.

For Emil Goll, lead singer of Scarlet Pleasure — the band behind the song “What a Life,” which plays over the film’s final, climactic dancing scene — it was his first time being full-out wasted with fellow band member Joachim Dencker, or as the Danes call it, “druk,” the movie’s original title.

“We shared a bottle of vodka together and we drank it in like 15 minutes. We were maybe 15 years old,” Goll recalls, grinning sheepishly at the memory. “It was like five minutes of just pure heaven, like the greatest joy of my life, almost feeling like being out of our bodies. Then five minutes later we were throwing up all over the place and we blacked out.”

Two girls Goll knew from the neighborhood had an eye out for them, though.

“They followed us, to make sure we were OK. One of them was Mads Mikkelsen’s daughter,” he remembers. “So it was Mads Mikkelsen who came to pick us up at the train station and drive us home. I remember being off my head in the back of his car with a case of beers and feeling like I was in a movie, it was so surreal.”

How much stranger must it have been to be watching the Oscars last weekend when Laura Dern announced Another Round as winner for best international film. As director Thomas Vinterberg ran up to the stage, it was to the accompaniment of Scarlet Pleasure’s song.

“We were watching in Copenhagen, at the offices of [Another Round producers] Zentropa, it was pure druk,” jokes Goll.

“It’s been strange because the song has become something of an anthem in Denmark because of the film,” adds bass player Alexander Malone. “But, because of [COVID-19], we haven’t been able to play it in front of an audience.”

Oscar Winner 'Another Round' Set for Remake by Endeavor Content, Appian Way, Makeready

The only live performance of “What a Life” took place at the Danish premiere of Another Round in September. “But that was in a theater for the premiere audience, which is a lot different than playing a real concert,” says Goll.

The song, and the scene it plays over, are an almost-perfect encapsulation of Vinterberg’s dramedy, in which four high-school teachers decide to address their mid-life crises with a dedicated bout of day-drinking.

The film, which shows the glorious highs and the destructive lows of alcohol excess, miraculously avoids lurching into becoming a men-behaving-badly Hangover-style comedy while also steering clear of finger-wagging moral instruction. In the movie’s final scene, a tipsy Mikkelsen, who has just suffered a tragic loss, begins to celebrate with his friends and their pupils. In a single long scene, he whips himself into a dervish dance of joy, joy at life itself. Over it, Scarlet Pleasure’s song plays: “What a life, what a night/What a beautiful, beautiful ride/Don’t know where I’m in five but I’m young and alive/Fuck what they are saying, what a life.”

Says Goll, “It’s almost uncanny, because the theme of the song and the theme of the film are just so similar, about the celebration of life, with the light and the dark. Even though we wrote it back in 2018.” 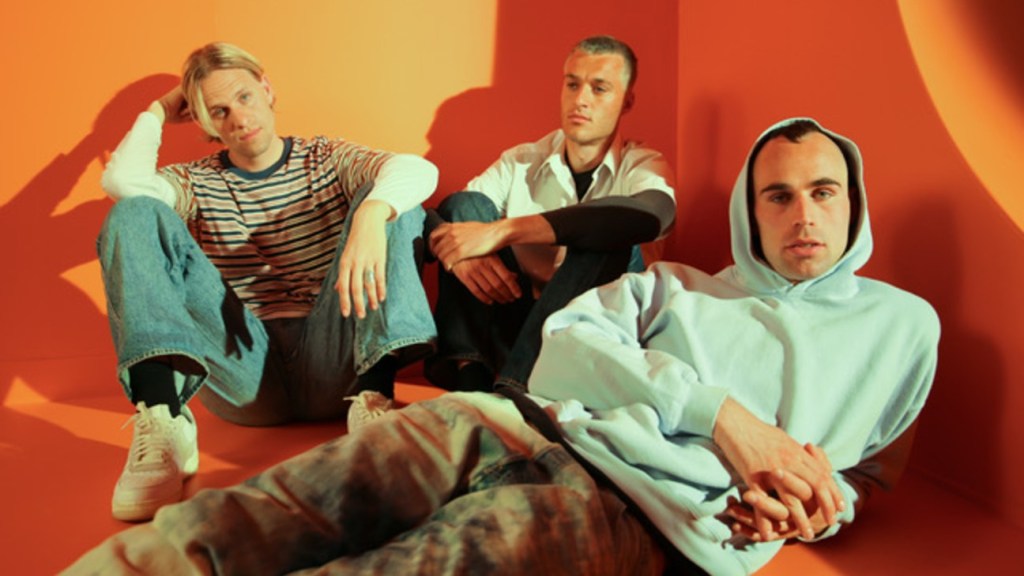 Scarlet Pleasure was just coming off a tour for their 2017 EP Limbo (their 2016 debut album has the superb title Youth Is Wasted on the Young).

“We’d been touring all summer and it was over and we were somewhere in between, kind of ecstatic still but also hungover,” Goll recalls. “The line came to me: ‘Don’t know where I’m in five but I’m young and alive.’ We wanted to make a song that captured that feeling, that celebrated life but also had some darkness to it.”

The song’s infectious melody, which has elements of European folk music — “a kind of Balkan feel,” notes Dencker — came to Goll fully formed. “It was one of those very rare times where a song came out of nowhere and just felt both familiar and new. It was a pretty easy one to write, though it was difficult to produce.”

Difficult because the tune was a stretch for a pop group like Scarlet Pleasure. While the Danish trio mixes R&B, soul and funk influences — “we started as a Red Hot Chili Peppers cover band,” admits Goll — the folk style of “What a Life” was something different.

“It’s slower than we usually play, or at least at first, but then it builds,” says Dencker. “Getting the transitions right, the changes in tempo, were really hard.”

Initially released Feb. 1, 2019, as a single from the band’s Garden album, “What a Life” charted in Denmark, reaching No. 5. It wasn’t Scarlet Pleasure’s biggest hit — both “Limbo” and “Deja Vu” off Limbo did slightly better — but it was a solid top 10 performance.

The tune appeared to have had its run when Vinterberg and Another Round producer Kasper Dissing approached the band to ask if they could use it for the film.

“They said they’d been listening to tons of songs, maybe like a thousand songs, for the ending scene, which is obviously a huge part of the film,” says Goll. “At that point, they said they were close to maybe not having the dancing sequence [if they couldn’t find the right music].”

Adds Dencker, “It was actually Thomas’ wife Helene [Reingaard Neumann], who also acts in the movie. She told us she’d been listening to our music for some time and she told Thomas, ‘You have to hear this song again.'” After re-listening, Vinterberg was convinced. But he wanted some changes. In its original version, “What a Life” was too slow and didn’t match the Mikkelsen dance he had worked out in his head.

“The first version was kind of linear, but Thomas wanted it to build to a climax,” says Goll. “And he wanted the chorus to sort of loop, for the whole mantra of the song to keep repeating. So it would fit Mads’ dance. Overall, he wanted something more energized, more cinematic.”

To add energy and tempo, the band added live drums and synthesizers to the mix. They also sampled from the film itself, using the raw audio from the scene in which the pupils around Mikkelsen start singing.

“We took that choir and put it into the ending of the song, so it felt like they were there singing the final chorus, sort of lifting the whole song up at the end,” Goll explains.

When they saw the final version, playing over Mikkelsen twirling and leaping across the cobblestones of the Copenhagen harbor, the band knew they had something special.

“The song had even more energy, more emotion. We were just so moved when we saw it in the scene,” says Goll. “And also really, really, proud to be part of a film like this, which when it premiered already felt like it was a classic, something iconic for Denmark.”

In September 2020, after the film’s premiere in Denmark, the film’s version of “What a Life” shot up the charts, hitting No. 6 on Spotify’s viral 50 and No. 7 on the music streamer’s top 200 in Denmark as overall streams of the tune increased 90 percent.

Mads Mikkelsen on Embracing Alcohol, and Life, in 'Another Round': "It's Not a Moral Story"

The timing, of the film and the song, couldn’t have been better. Denmark had just come out of a long COVID-19 lockdown and audiences were pouring into the cinemas to see the movie. Another Round became one of the most successful films of all time in Denmark, selling more than 800,000 tickets (in a country of just 5.8 million). It was Denmark’s movie of the year. And “What a Life” was its anthem.

“There was definitely this feeling — because the whole lockdown had just ended — this sense of hope,” remembers Goll.

In the winter, when the second wave of the novel coronavirus hit Denmark and the country went back into lockdown, people began turning to “What a Life” as a reminder of that hope. The band started seeing posts of people dancing and singing to the song.

“If you were at home on the weekend, you’d hear it playing from a neighbor’s balcony,” says Malone, “then someone would yell: ‘Turn it up!”

Evidence that “What a Life” has become, as Goll calls it, “Denmark’s new drinking anthem,” came on New Year’s Eve, when streams of the song shot up 2,160 percent.

Another Round‘s Oscar win has given the song a further lease on life. Following Sunday’s Academy Awards, “What a Life” was back with a bullet at No. 9 on Spotify’s top 200 in Denmark. The various versions of the song — in addition to the two from Scarlet Pleasure, a new French-language take, from the singer Suzan, premiered online April 23 — have racked up around 14 million streams to date.

“It’s become more than a song, it’s become a cultural thing now [for Denmark],” says Goll. “It has a much deeper meaning for all of us. It will always be so special to us to have been a part of this film. Plus we got the best music video ever. With Mads Mikkelsen dancing drunk to our song.”

And afterward, you can be sure, the band would be more than happy to drive him home.

Making of 'Another Round': How Director Thomas Vinterberg Found Strength to Complete "Tribute" Film After Family Tragedy