[This story contains spoilers for Black Christmas, Ready or Not and Hustlers]

Horror has long been a space to talk about femininity and gender, whether it’s the overt abortion allegory of 1974’s It’s Alive or the role of the final girl in countless slashers. This year has been particularly pointed in how the horror genre uses gender to critique issues affecting women today, and this weekend’s Black Christmas, a loose reboot of the 1974 Bob Clark-directed sorority horror feature, caps a year that saw a number of films looking at the horrors women face, and their desire to stand up and fight for their rights.

Where the original Black Christmas dealt with sexual harassment (and a side plot on abortion), director Sophia Takal and co-writer April Wolfe’s take is a pointed critique of today’s culture. Their leading lady, Riley (Imogen Poots), is a student of Hawthorne College and a rape survivor. While Riley is still suffering the effects of her trauma, the college has moved on, with the administration not believing her claims and only her sorority sisters and a few others standing in solidarity with her.

Screenwriter Wolfe has said that the movie was inspired by the confirmation hearings of Brett Kavanaugh, the Supreme Court justice accused last year of committing sexual assault as a teenager. It’s easy to see this influence reflected onscreen. The fraternity at the center of the movie is one with roots deep in the founding of America. Riley’s friend Kris (Aleyse Shannon) brings up that the founder of Hawthorne owned slaves and his statue, once the centerpiece of the campus, has been removed due to cultural sensitivity. As Riley and her friends are set upon by the frat, it’s discovered that their power comes from the statue itself. This blending of the mystical and the historical also popped up earlier this year in the film film Ready or Not. That film also involved a final-esque girl, played by Samara Weaving, being hunted by her rich in-laws. 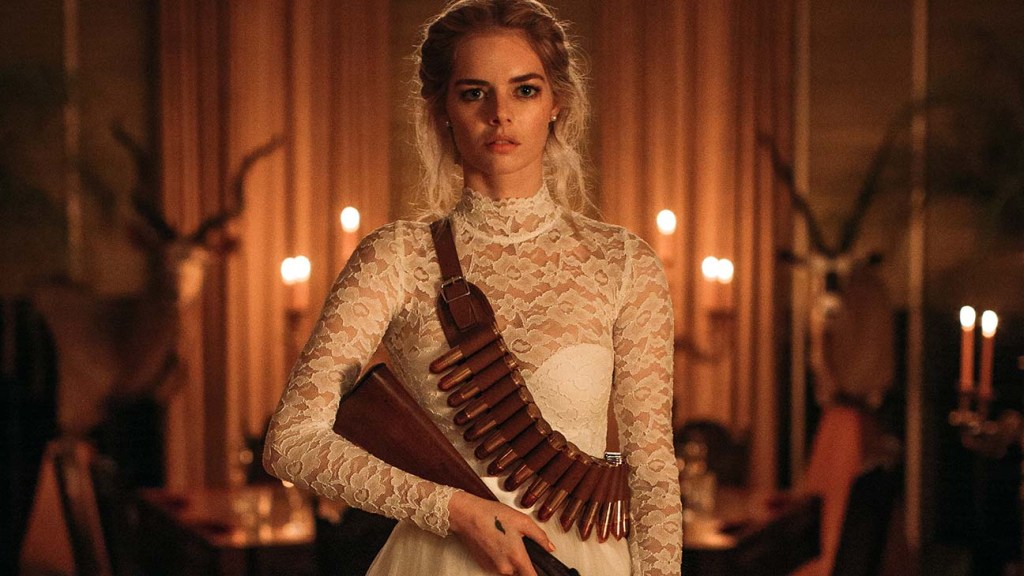 The family at the center of Ready or Not also have its wealth and, by extension, its power, gifted to them through magical means. The family patriarch effectively sold his soul to a man named Mr. Le Bail who granted him money and prestige. In return, anytime a family member gets married their spouse must “play a game.” Weaving’s Grace is the new initiate tasked with surviving a game of hide and seek and, like the women of Black Christmas, realizes that being a woman means she’s perceived as lesser. In the world of the rich, powerful and male, she will always be the sacrificial lamb. So when her husband, a man going presumably against his family and willing to throw away money for love, ultimately turns on her, it is a reminder that the patriarchy will always work to keep itself afloat.

Black Christmas, as with Ready or Not, emphasize that prestige is so rooted in the founding of America that holding rallies or signing petitions isn’t enough. One of the characters gets mad about how consequences are never doled out, while men express a fear of being accused. Both movies show how determined these dominant groups are to keep their power. To them, everyone is expendable, especially women. These authoritarian figures are the first to turn to the magical and supernatural in order to obtain what they want.

What the men in Black Christmas want isn’t necessarily power, but rather to situate women as the secondary species, to reassert old school gender roles of woman as obedient wife and mother. Nearly every genre of film has discussed gender roles, with women who don’t fall into the two categories above being commonly labeled a villain. Whether that be the 1940s femme fatale of noir or the obsessive stalker of Single White Female, a woman who isn’t in the business of pleasing men, according to cinema, is to be feared. And yet, Black Christmas says that women have a choice, not just in their bodies but in their personalities. When one of the sisters, Helena (Madeleine Adams) betrays Riley and becomes what the frat wants her to be, she assumes she will be rewarded. As with the family of Ready or Not, there is a misguided belief that toeing the party line will trickle down and benefit everyone. Of course, this isn’t to be.

The smashing of gender dynamics for women has also popped up this year in Lorene Scafaria’s stripper drama Hustlers. Though not a horror film like  Black Christmas, it continues the trend of 2019’s critique of gender. It’s lead characters, Ramona (Jennifer Lopez) and Dorothy (Constance Wu) don’t want to be millionaires; they just want to enjoy life and provide for their families, but they understand that the way the system works they’ll never get there. The only way they can do so is to get back at the men who have the power. Greed eventually overtakes them, as with any good heist film, but their actions become the rallying cry of the oppressed everywhere. Money may not buy happiness, but it can provide you with the security to relax and make yourself happy.

Women are sick and tired of being sick and tired, and it was reflected in this year’s features. Black Christmas is the cherry on the horror cake, transitioning the genre away from the male-directed final girl and letting women take the reins. There is nothing final about their quest. Instead, they move toward finally being accepted for who they are.