Ceyda Torun spent her youth in Istanbul, where cats roam the streets and are cared for by the community. She returned to Turkey for her film Kedi (Turkish for “cat”), which follows seven feline protagonists and the humans who tend to them.

How did you decide to make this movie?

I did grow up with the cats exactly as you see them as a child in the backyard of my apartment building in Istanbul. They were part of the, sort of the fabric of my childhood memories. When we formed our company about four years ago and we were looking at projects we could do, and on a slate of projects we wanted to do a documentary, we knew we wanted to do something in Istanbul, because any excuse we could get to go and spend time there, we try to make it work. At that time it was probably the height of the internet cats online, the renaissance of cats online. And in many ways that’s what motivated us, and we had some collaborators early on who had come to Turkey with us and also seen the sort of exotic appeal of how cats just wander the streets without anyone really seemingly objecting to it. And we came to realize that this was something that especially foreign audiences — but we didn’t think American, we initially thought European  — would be interested. And then we at first thought maybe we could do like a nature documentary, like a March of the Penguins but with cats. We did a test shoot and we talked to people. And as we were talking to people and as I was translating to Charlie my co-producer and cinematographer, we started to notice how philosophical people seemed, and how poetic they were, and realized that that was as essential a part of the story.

Did you have any trouble getting people to participate?

The thing that was difficult — but in the end very telling — was that I tried to pursue people who seemed to really hate cats. No matter what we did, it was almost impossible to get them to speak about why they hated cats. I realized it wasn’t actually about the cats. These were people who were very closed to the world, let alone cats and humans, so whether it’s a cat or a child or a woman, they’re going to exert their issues on those beings. 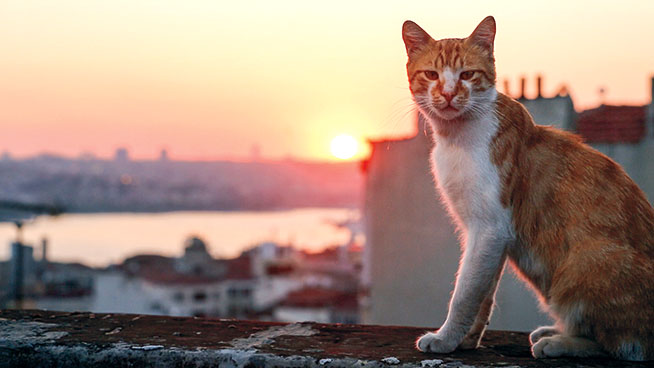 Cats are infamously skittish. Did you have problems filming them?

Maybe three out of the 10 cats we approached were skittish and would run away, but that was my way of determining if a cat was giving us permission to film him.

Did you learn anything new about people after making this film?

It was a bit of an interesting summer — the summer of 2014 — because the summer before there were major protests, and the summer after there was a failed coup, and so things have gotten progressively worse since. Even in the rest of the world, I think there was kind of a lull in that summer of 2014. And people were a little confused about how they felt about the world and there was so much starting with the Syrian refugee crisis. We were often in places where we were shocked to see the number of refugees, but this wasn’t also being reported on properly at the time. Every day we questioned the fact that we were making a cat movie, but also it would highlight the reason why we were making it. And I would say that the fact that the majority of the people that we interacted with exhibited this level of compassion and consideration and love that they were so ready to give and so happy to share, was so wonderfully optimistic. And I’m not the most optimistic person in the world. So for me to encounter this much sort of love and selfless giving, I came out of that shoot thinking, “OK, Istanbul is going to be fine, we’re going to be OK.”

Did you learn anything new about cats?

It’s a little gross, but I learned mom cats lick the bums of their babies because they don’t know how to pee and poop yet.

A version of this story first appeared in a November standalone issue of The Hollywood Reporter magazine. To receive the magazine, click here to subscribe.