In the 28 years since Terminator 2: Judgment Day set a new high-water mark for filmmaking technology and box office success, the franchise, begun in 1984, has had three sequels that have sought to expand and explain the mythology and story. The results have been mixed, sometimes contradicting what’s come before and often making the time travel-heavy premise confusing to audiences.

Terminator: Dark Fate, debuting Nov. 1 from Skydance and Paramount, takes an approach similar to that of the first Jurassic World and the recent Halloween by ignoring those films and offering a direct sequel to Judgment Day.

Natalia Reyes stars as Dani Ramos, a young woman who one day finds herself targeted by a new Terminator — the Rev 9 (Gabriel Luna) — who has been sent back in time to kill her before she can play an important role in the Human Resistance against the malicious Legion artificial intelligence. Also sent from the future is Grace (Mackenzie Davis), a cybernetically-enhanced human tasked with protecting Dani. To help in that effort Grace seeks out the legendary Sarah Connor (Hamilton), who has spent the last two decades eliminating any and all Terminators that arrive in the present day.

Not only does Dark Fate mark the long-awaited return of Hamilton to the Terminator series but also Cameron, who produced this latest installment and is co-credited with the story. Directed by Deadpool’s Tim Miller, the movie currently sports a 68 percent “Fresh” rating on Rotten Tomatoes. In promotional efforts, Hamilton, Davis and Reyes receive the bulk of the marketing campaign’s attention.

Sarah Connors’ return is the main theme of the first poster (by marketing agency BLT Communications), released in late May. It shows her walking by herself down an empty desert highway, sunglasses protecting her eyes and an imposing shotgun protecting her from everything else. “Welcome to the day after Judgment Day” reads the copy, which not only sets the timing of the story but also nods to how this movie essentially ignores all the other Terminator films released since 1991. Cameron’s involvement is noted at the top while an additional appeal is made by mentioning Miller having previously directed Deadpool.

“Welcome to the day after Judgment Day” reads the copy on the poster released at the end of August, part of a larger campaign detailed below. All the main characters are shown in various action poses here, with Sarah looming over everything and the new Terminator walking along a highway at the bottom.

A few weeks later a series of character posters (by marketing agency Art Machine) came out that offered better looks at the T-800, Sarah, the pair of Grace and Dani, and the new Terminator while encouraging audiences to “Choose your fate,” a copy point meant to create relevance in the audience given the series’ focus on fate and destiny.

Two IMAX posters have been released. One features the same yellow/orange sky as the theatrical poster but offers a close up of Connor and the T-800, positioning the reteaming of that unlikely duo as the primary selling point for the film. The second shows a painting of the T-800’s metal endoskeleton, the watercolor paint streaking and the canvas smudged to create both dread that the machine has returned while also conveying it isn’t as indestructible as it seems.

The first teaser trailer (20.8 million views on YouTube), released in May, starts out with narration from Sarah Connor to immediately establish she’s back in the series. We finally see her when she comes to the rescue of Grace, who’s trying to keep Dani Ramos safe from a new kind of Terminator that is even more resistant to bullets and other weapons than previous models. Sarah believes Grace is some kind of machine but she claims she’s not. The two eventually seek out the help of the original T-1000 before we’re shown a huge action sequence involving a falling plane and are told that keeping Dani alive is key to the humans winning their war against the machines.

The official trailer (13.7 million views on YouTube) was released in August. Specifically, it was released on August 30, right after when Judgment Day occurs in-universe. That release was heralded by six “Meet Your Fate Countdown” videos featuring footage that would be shown more fully in the trailer while asking fans if they were ready for what happens after Judgment Day. 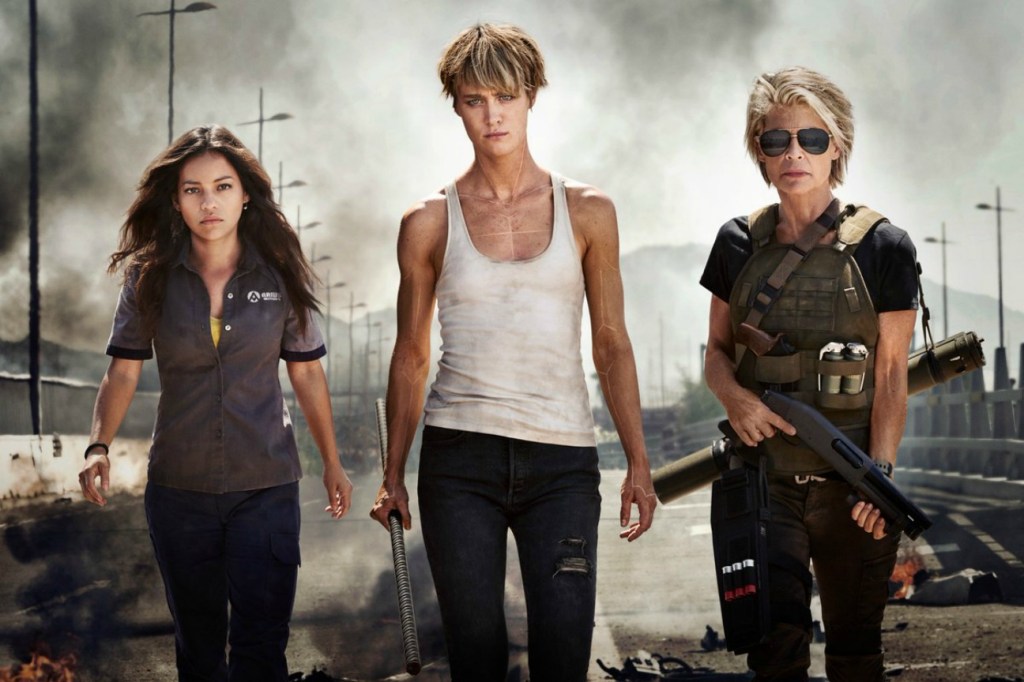 News about the movie started circulating out of CinemaCon 2018, with reports the story would be a direct sequel to T2 (taking the Superman Returns approach to other sequels) and that it would once more feature Sarah Connor as the protagonist.

In early August of 2018, Paramount released the first official look at the movie in a photo that showed Hamilton, Davis and Reyes all looking battle-worn and determined. Several months later, while promoting Alita: Battle Angel in mid-February, Cameron confirmed the movie was currently operating under the title Dark Fate, a subtitle that was officially affixed in March.

Both Schwarzenegger and Hamilton appeared onstage with Paramount execs to debut footage and start the buzz at CinemaCon, getting generally positive reactions from those in attendance.

Skydance ran a Promoted Tweet immediately following the release of the first trailer, positioning it as the account to follow for future updates and information about the movie.

A featurette released at the same time as the first trailer includes comments from James Cameron explaining how this is a direct sequel to the second movie, ignoring subsequent sequels, and showing production of some of the film’s biggest stunts. Also highlighted is the return of Hamilton to the role of Sarah Connor. 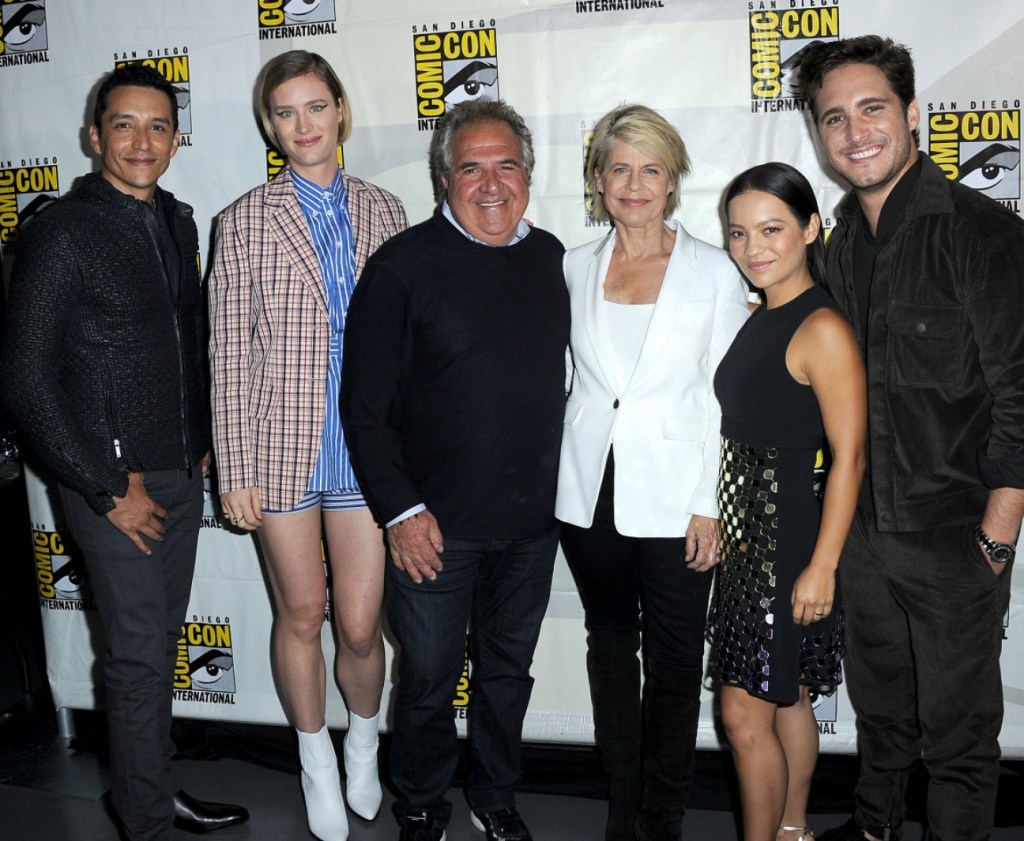 Paramount planned a Hall H presentation at San Diego Comic-Con in July that included appearances by Hamilton, Schwarzenegger and the others along with a video message from Cameron (from the set of the upcoming Avatar sequels) in which he announced Edward Furlong would rejoin the franchise, reprising his character from the second movie.

Miller confirmed during the panel that the movie would sport an R-rating, clearly setting it apart from the PG-13 sequels that have left fans wanting. A new featurette offering a behind-the-scenes look at production also debuted at SDCC.

Exclusive footage was offered to those participating in a live-streamed reddit AMA session conducted by Miller and the cast just hours after that Comic-Con panel. 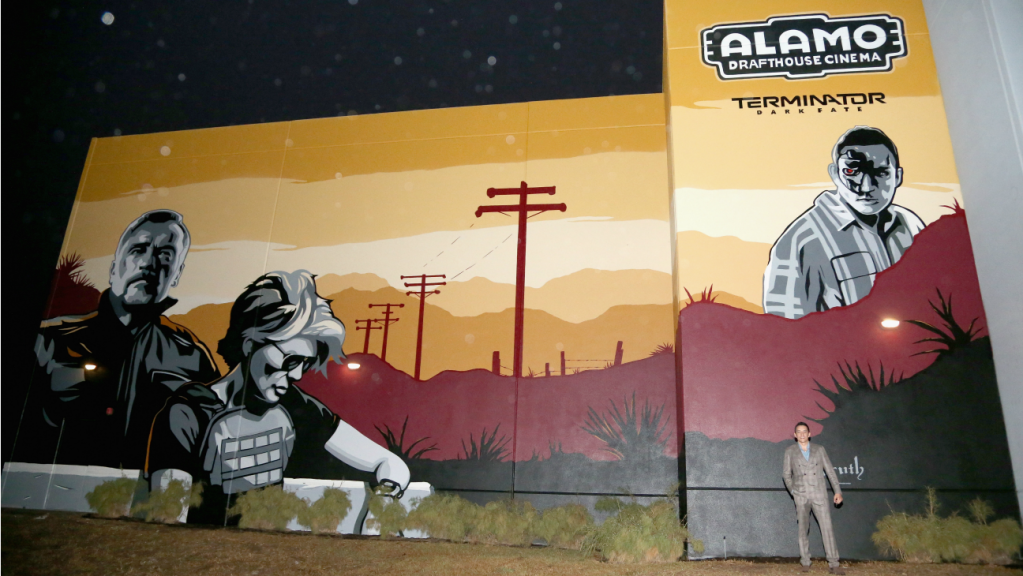 In August, as part of the buildup to the release of the full trailer, Paramount put out a series of short videos with Hamilton, Luna, Reyes and Boneta all answering one question: What does Terminator mean to you? There were also short video messages from Miller and Schwarzenegger.

A new first-person video game set in the time of the war between humanity and machines was announced by Reef Entertainment in September.

The Alamo Drafthouse held a surprise screening of Dark Fate for fans in mid-October, generating quite a bit of positive word of mouth from those in attendance. It also commissioned a mural for the outside of its Austin theater that’s similar to some of the key art.

Unsurprisingly, the first clip released in October offered a stand-alone look at Connor’s takedown of the Rev-9 on the bridge. Subsequent clips showed Grace protecting Dani while the Rev-9 is in pursuit and the T-800 fighting the Rev-9 as the heroes attempt to escape. Notably, none of the clips offers much in the way of character development or story, just lots of machine guns, explosions and cool special effects.

An extended TV spot that came out a few weeks prior to the movie’s release focused both on how lethal the Rev-9 is as it takes down everyone standing between it and Dani. It also marks the first time in the campaign we learn the T-800, shown previously as living in the woods somewhere, now goes by the name “Carl” and seems to have made a life for itself over the years.

Online ads used elements of the key art along with video snippets to drive traffic to the ticket sales website.

Promotional Partners for the Movie

? Adobe Creative Cloud signed on and published a series of videos detailing how that company’s software was used to create the movie’s effects. It also ran the “Create Your Fate Trailer Remix Challenge,” where amateur video editors could use footage from the film and enter their finished products into a contest to win $10,000

? Ruffles, which offered co-branded packaging for its chips and ran a contest to win a trip to the movie’s Los Angeles premiere.

Schwarzenegger and Hamilton appears as themselves in a spot created exclusively for ESPN. In the commercial they encounter — and share Terminator-themed comments with — NBA stars Kawhi Leonard and Paul George. Also on the sports front was an MLB promotion showing the Terminator’s targeting eye honing in on the location of a pitch. A UFC promotion reinforced the connection between Sarah Connor and the other women in the film to the sport’s fighters.

Hamilton, Schwarzenegger, Davis, Reyes and the rest of the cast, along with Miller, went on a global press tour that included stops in London and Mexico City, but the Los Angeles premiere, scheduled for this past weekend, was cancelled because of the wildfires sweeping through the area. 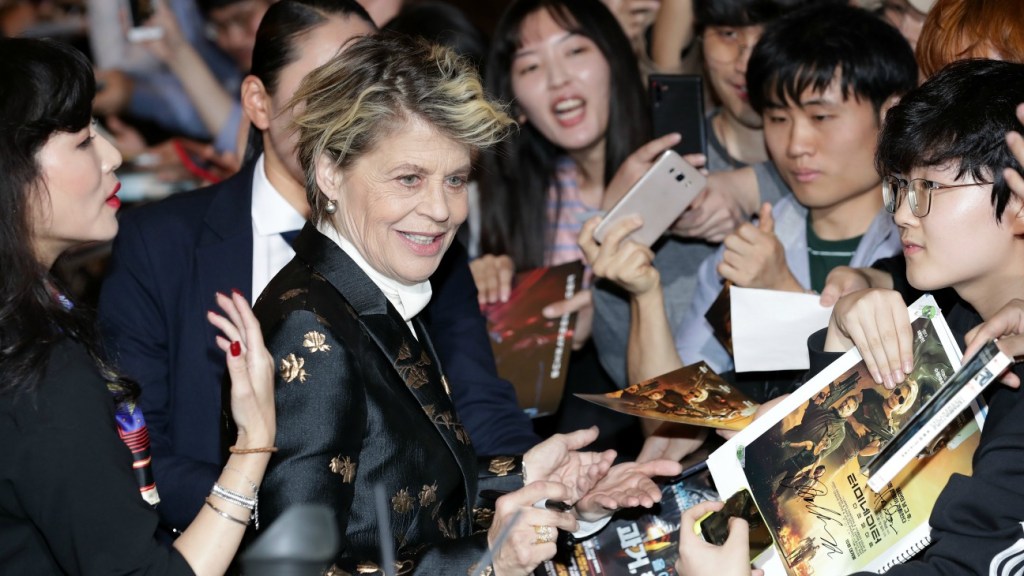 There’s a shift in the focus of the campaign that happened around August of this year.

At first everything was about the return of Hamilton and Cameron to the franchise. That’s a major story and a big moment considering neither of them have been involved in any of the post-1991 sequels in a meaningful way.

While that remained a throughline of the publicity efforts, in the last few months there’s been more attention paid to the action and special effects featured in the movie. Along with that has been more footage of Davis and Reyes in action, positioning this as a form of baton-passing from one generation to the next.

Consistent in the marketing, though, is the message that this movie is one that bring the franchise back to what it should have been all along. By ignoring the events of the three subsequent sequels it allows it to appeal to fans who have been less than thrilled with those entries.

The clips have been all about the action while the featurettes and other promotions have reinforced the connection between this movie and 1991’s Judgment Day, showing how the cast is here to extend and complete that story while also offering something new for modern audiences.