Following a movie that became one of the most successful animated films of all time, one that became a cultural phenomenon, is no easy task. Selling that follow-up as essential may be even more difficult.

That’s exactly the challenge Disney faces in marketing Frozen 2, which releases Nov. 22. While the kids who immediately asked for branded backpacks featuring Anna (voiced by Kristen Bell), Elsa (Idina Menzel) and Olaf (Josh Gad) are assumed to be ready to revisit the magical kingdom of Arendelle, those kids are also now six years older. At the same time, there’s a new wave of young kids ready to visit these characters for what might be the first time.

Set three years after the events of the first film, the new movie finds Anna and Elsa travelling outside Arendelle on a journey of self-discovery. Elsa has begun hearing strange voices calling to her from outside the kingdom and believes they may hold the secrets to her magical abilities. Unwilling to let her sister go into danger alone, Anna joins her, as do Anna’s boyfriend, Kristoff (Jonathan Groff), his loyal reindeer, Sven, and, of course, Olaf the snowman.

To thread the needle of appealing to several distinct age groups, Disney’s campaign has presented the movie as both familiar and new to the audiences that powered Frozen in 2013 to $1.27 billion worldwide. Here’s a look at the marketing campaign.

An ice crystal is the only element shown on the teaser poster (by marketing agency Legion Creative Group) from early in 2019, a tactic that’s similar to how Disney has used one iconic item on posters for its new versions of Dumbo, Aladdin and more.

The second poster, released in early June, shows Anna and Elsa together in the woods, presumably in the middle of the journey they’ve undertaken. A similar poster came out in August, but this time the sisters are further away from the camera and the woods are covered in snow to make it clear it’s still a frozen setting that the story will take place in.

In September, the theatrical poster was released, showing Elsa standing at the front of the other characters assembled behind her like a superhero team ready to head into action. She’s also seen at the bottom, standing on a mountain of ice and blasting snow around the group, constellations forming outlines of some of the supporting characters.

A series of character posters (by marketing agency Ten30 Studios) featuring Elsa on her own, Elsa and Olaf in danger, Olaf being adorable and Kristoff and Sven riding into battle came out in October. This group nicely distills the selling points of the movie, specifically the power Elsa has at her command and the cute, loyal naivete of Olaf.

For Dolby Cinemas, the core group of characters is shown in the middle of their journey as they hike across the wilderness. Falling leaves and a few melting icicles show when the story takes place in a design that looks like a watercolor painting, adding a nice bit of texture to the poster.

The Imax poster offers a look at a shot seen in the teaser trailer, with Elsa running up the ice path she’s created, only to be met at the top by a horse also made out of ice. It shows how Elsa is heading into danger, while creating a sense of mystery about what exactly she’ll face. That same horse is seen gliding through the nighttime sky on the RealD 3D poster, with Elsa reaching up while surrounded by autumn leaves all around her.

The first teaser (43.6 million views on YouTube) from February primarily got people talking and speculating about what was happening and who new characters might be. The first full trailer (85.5 million views on YouTube), released in early June, focuses on Elsa being sent on a quest to find “the truth,” a journey she’ll be joined on by Anna, Kristoff and Olaf. What that truth is remains vague, but the quest will involve crossing areas filled with magic and danger.

In September the second trailer (21 million views on YouTube) debuted on corporate sibling ABC’s Good Morning America, beginning with a flashback as Anna and Elsa are told the story of a hidden, magical land by their father. When Elsa begins hearing voices and a mysterious power threatens the kingdom, the sisters set out to find out what’s happening, only to discover Elsa’s powers may hold clues. It’s filled with dramatic scenes as well as plenty of Olaf to keep things light. 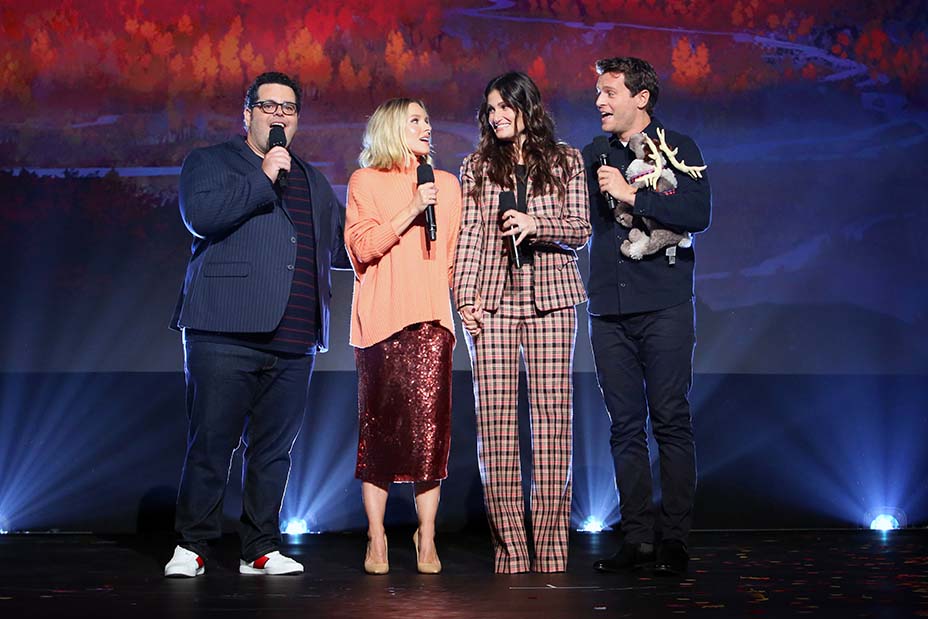 Disney used the Annecy International Film Festival as the venue to debut a couple clips from the film. A bit later, in early July, the studio brought a photo station with Elsa and Anna to Essence Fest.

The movie was a big part of August’s D23 fan convention. Not only was there a pavilion on the show floor for people to visit and take pictures in, but footage was shown to attendees and members of the cast appearing to answer questions. Exclusive artwork and other collectibles were also available, and two new songs from the movie were shown off there. A new mobile game, Frozen Adventures, was announced in August for release timed with the movie hitting theaters.

Target revealed a deal with Disney in August that included the retailer creating themed sections in dozens of their stores specifically for merchandise related to all Disney’s properties, including this movie and others.

A “Special Look” released at the end of September featured one of the movie’s new songs and included lots of footage of Elsa taking on the challenges she’s presented with on her journey. TV commercials began running in early November, with spots that focused on how this movie ties into past events, what new adventures await the characters and more.

Promotional partners for the film included: 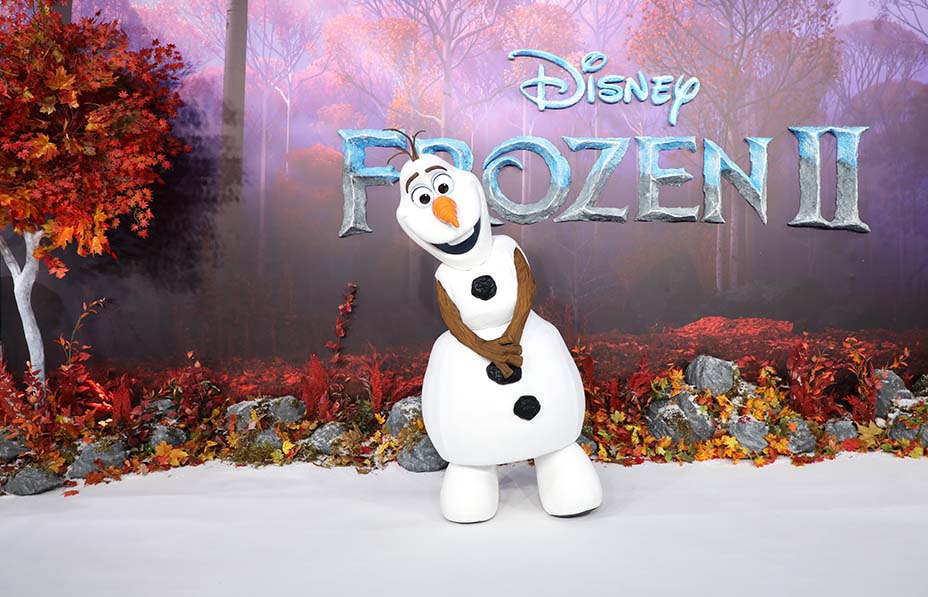 ? Saks Fifth Avenue, which offered a variety of high-end dolls, fashion accessories and more. Next week, on 11/25, Saks’ New York City flagship store will receive a movie-themed makeover, unveiled with a performance by Menzel.

? Google, which gave users of its Nest Mini and other voice assistant devices access to exclusive original stories featuring the movie’s characters.

? Ziploc, which put movie branding and images on packages of storage bags.

? JC Penney, which ran a series of commercials highlighting all the movie toys, apparel and other merchandise available online and at stores. It’s also offering an exclusive Olaf ornament only in stores on 11/23.

? Nature’s Own, which ran a sweepstakes giving people the chance to win a trip to Norway on Adventures By Disney.

? General Mills, which offered movie tickets and concession coupons in partnership with Fandango for those buying two movie-branded packages of Go-Gurt or Yoplait.

? Enterprise, which ran a campaign positioning the car rental company as the best place to start an adventure.

? Kellogg’s, which put movie branding on various cereal and snack packaging, all of which contain temporary tattoos of the characters. How those tattoos make breakfast magical was reinforced in TV commercials run by the food company.

Some of those brands ran their own online ad campaigns to drive awareness, in addition to other efforts. Disney’s own ad campaigns used images from the key art along with video snippets to push people to the website to find out more.

The cast appeared in an Imax promotional video reminding audiences tickets were on sale for the large format screenings. Users of the Regal Cinemas app can unlock an AR experience when they scan the movie’s poster in theaters.

A series of short featurettes were released over the last two weeks. It started with the cast talking about how they first met and what it was like to reunite for the sequel. The second had them playing a movie-inspired game of charades.

Members of the cast were in attendance at both the world premiere in Hollywood at the Dolby Theatre on Nov. 7 and the European premiere this past weekend. Bell, Menzel and others also made a surprise appearance earlier this month at Disneyland Resort to help promote the movie and kickoff the holiday celebrations there.