Continue to The Hollywood Reporter SKIP AD
You will be redirected back to your article in seconds
Skip to main content
August 2, 2019 10:42am

The Fast and the Furious franchise is on the cusp of entering its third decade as a box-office powerhouse. Over the 18 years since the original grossed $207 million worldwide, it has evolved from being simply about criminals using high-performance street racing to mask their activities to focusing more on how family is who you choose to be with and who you’re loyal to. Through all this, there have always been increasingly outrageous stunts and, yes, fast cars.

This week brings the first spinoff in the series, Fast & Furious Presents: Hobbs & Shaw. Dwayne Johnson and Jason Statham reprise their roles as special agent Luke Hobbs and mercenary Deckard Shaw, respectively, from previous Furious movies. The unlikely pair, usually on other sides of the law, have been recruited to protect MI6 agent Hattie Shaw (Vanessa Kirby), who just happens to be Shaw’s sister. She’s in danger because of her work tracking down the intelligence operative-turned-criminal Brixton Lore, played by Idris Elba.

The $65 million opening weekend estimated by early tracking would be the lowest for the franchise since 2009’s Fast and Furious, but with the caveat that this is a spinoff entry in the series. To help the movie stand out in a summer dominated by superheroes and remakes — and keep the franchise on track until the next official entry — Universal’s campaign has focused less on the story and more on the reluctant — occasionally hostile — working relationship between Hobbs and Shaw.

The two title characters are seen on the first poster (from marketing agency L.A. Associates) sitting on either side of a street with their respective home environments in the background. So Hobbs is in Southern California surrounded by palm trees while Shaw is in London with Big Ben looming behind him. Four character posters came out a month later in March that put the spotlight on the major good and bad guys in the story, each posing with a powerful car of their own.

A black and white photo of Hobbs and Shaw walking away from their cars was used on the IMAX poster. For Dolby Cinemas, the same photo seen on the teaser poster had a filter applied to make it black and white with yellow outlines around the people, buildings and cars.

The first trailer (16.1 million views on YouTube), released in February in conjunction with a paid Super Bowl advertising buy, starts off by introducing us to Brixton, the bad guy of the story. The threat he poses leads law enforcement to recruit Shaw to help bring him down, a situation Hobbs is none-too-thrilled with. That’s about the extent of the character development, as the rest of the trailer is just about how the two don’t work well together but cooperate enough to try and stop Brixton from doing whatever it is he’s going to do. The point here seems like it isn’t necessarily to sell any sort of story, just the humor and explosions audiences are looking for in modern action films.

Late April saw the release of the second trailer (32.8 million views on YouTube) that once more plays up the rivalry between the two leads, showing how they’re always in competition with each other. When they’re forced to team up, it just devolves into a lot of sniping, but when the chips are down they have to visit Hobbs’ home and recruit the help of his extensive family of very large siblings to help bring Brixton down.

The final trailer (8.1 million views on YouTube) came in early July, just a few weeks before the movie opened, starts with an extended look at one of the key action/chase sequences from the movie and features lots more where that came from. There’s no explanation given as to why Hobbs and Shaw are chasing Brixton or what it is he’s trying to accomplish, just lots of explosions, fast cars, gunfights and the promise of “a Samoan ass-whooping.”

The movie’s campaign kicked off in a big way in February with the teaser trailer being used for a Super Bowl TV spot. That provided the audience their first look at how the franchise was being spun off to focus on two characters instead of the central “family” that has dominated the story previously.

Both Johnson and Statham appeared on stage as part of Universal’s presentation at CinemaCon earlier this year, introducing footage — including a brand new trailer — and promising exhibitors it would be a big, fun movie people would love to see in theaters. Another exclusive trailer was shown for CineEurope attendees in June.

ESPN’s coverage of the NBA draft in June included a commercial for the movie starring Zion Williamson and R.J. Barrett, two former college basketball rivals who were both expected at the time to go early in the draft. The spot mixed in footage from the film to highlight the theme of rivals becoming partners in some way.

TV advertising in the last month or so before released continued to focus on the car chases and explosions while also setting up Brixton as the bad guy the trio are on the trail of.

Johnson spoke at the premiere, which was live-streamed, earlier this month, about how important it was that the movie allowed him to celebrate his Samoan heritage, while Statham commented on the fun had by all during production. That premiere, though, was more exciting than expected due to some electrical issues resulting in sparks being sent into the audience.

Singer Aloe Blacc appeared on a recent episode of NBC’s “Songland” along with Leitch to select a song from one of the aspiring songwriters. The track, “Getting Started,” was then recorded by Blacc and produced by Ryan Tedder.

Universal released a video in July showing fans being shown the final trailer while riding in a race car speeding around an obstacle course.

Promotional partners for the movie include: 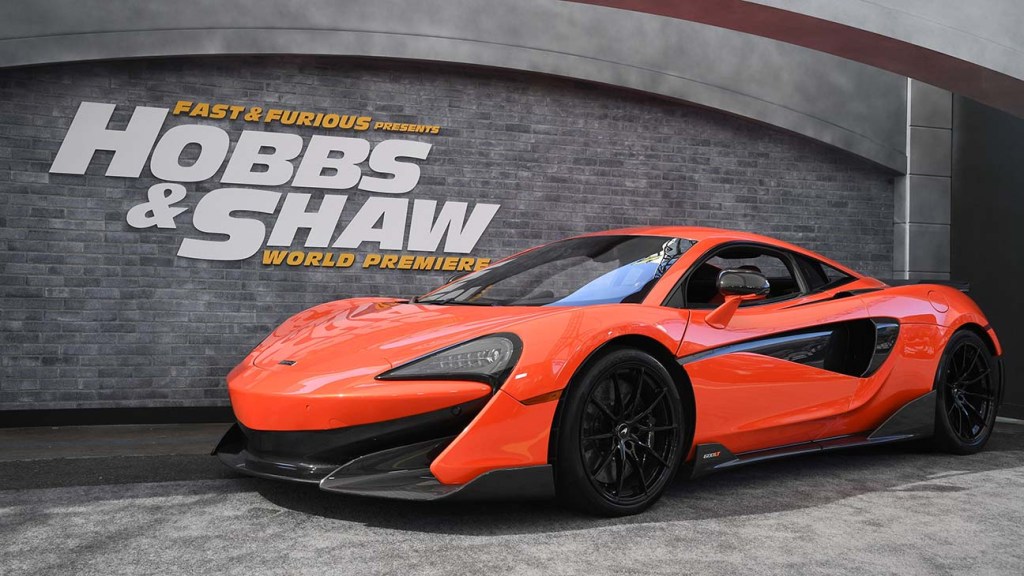 ? The PGA, which launched a campaign during the FedEx Cup Playoffs that riffed on the concept of action movies. Initial commercials focused on the superstar players while additional spots released later on mixed footage from previous PGA Tour events with scenes from the movie. Those spots played both on TV and in theaters as well as online, where promotional photos of the golfers were used as well.

? Brisk, which ran a sweepstakes for tickets to the movie. The drink brand also worked with artist Evans Alexandre to create a new co-branded commercial while also awarding Alexandre a grant to pursue other creative endeavors. Behind the scenes looks at the filming of the commercial featuring Roman Reigns, who plays one of Hobbs’ brothers in the film.

? McClaren Automotive, which provided some of the high-end sports cars seen in the movie. That partnership included a short featurette that had the stars and director talking about how excited they all were. The car brand was also part of an Omaze campaign where someone making a donation to charity could win an 720S Coupe. A McClaren 600 LT was on display at the movie’s premiere.

? Trendy Butler, which offered a personality quiz based on the movie to help you find your style.

? Turo, which curated two movie-themed collection of the cars available on its borrowing service, one based on Hobbs and one on Shaw. A co-branded commercial featuring footage from the movie supported that campaign.

Two sets of artwork were used both as outdoor billboards and online ads. One split up Hobbs and Shaw onto their own images while using the same photos as the teaser posters, showing them leaning on their cars in L.A. and London. The second also separated the two but put their names in large type, with scenes from the movie shown within the letters.

Featurettes put the spotlight on the actors playing Hobbs’ Samoan brothers who are recruited into the fight against Brixton, the “frenemies” chemistry between Hobbs and Shaw and the actual chemistry between Johnson and Statham and the work of director David Leitch. Another showed a group of women being trained in the same kind of stunt work Kirby engages in.

A series of clips focused, unsurprisingly, on the action chase sequences. Specifically it showed Shaw hitching an unconventional ride, Brixton’s incredible motorcycle moves and the harrowing lengths the partners go to as they chase Brixton down the side of a building. 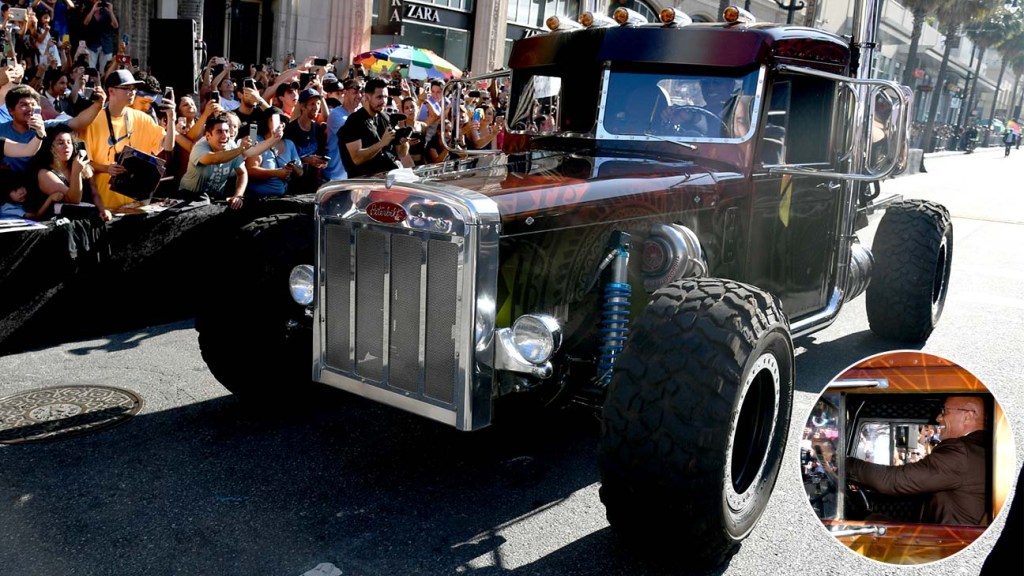 In marketing and promotions, Universal isn’t emphasizing the plot — any explanations of what motivates the bad guy or what conflict he presents to the good guys. Instead the studio appears to have decided the best sales pitch is Statham and Johnson sniping at each other. Every trailer, TV spot and other element features lots of action and big stunt sequences, but all of that is in service of the two of them calling each other names and getting on each other’s nerves. That’s shown clearly in a Giphy channel created by the studio devoted exclusively to the “smack talk” the pair engage in and how they are constantly trying to out do the other.

Still, later TV commercials have also included elements that are familiar to the Fast and Furious movies that have come before. In one from early June, Hobbs turns to Shaw as the two are in the middle of a confrontation with Brixton’s goons and says “I got your back, brother.” Even in the spinoffs of the franchise, we are reminded that it’s all about how trials and tribulations form familial bonds between two people, even those who start out hating each other’s guts.