During this unprecedented awards season that wrapped on Sunday with the Oscars, Hollywood societies and guilds sought out creative ways for viewers to mingle and network during virtual galas. One such example is how the Motion Picture Sound Editors pulled off its 68th Golden Reel Awards, which was part Zoom meeting, part video game.

Held April 16 and built on Allseated’s “exVo” virtual event system, it began when a guest entered the event and was prompted to upload their photo which was placed on the head of their personal avatar (guests also had the option to add a company logo). The avatars then entered a virtual event space, inspired by locations in New York and Mexico.

Guests used their keyboards to move their avatars around the environment — though some of us also bumped into virtual walls or walked through virtual furniture along the way. Clicking on another avatar opened up a Zoom chat with that guest. If more people clicked on, that turned into a group chat.

The ”pre-show cocktail party” was held in a virtual ballroom (there was also a VIP room and sponsor signage throughout), before guests were asked to move their avatars to points in the space where they could “teleport” into a theater modeled after New York’s Manhattan Center. There, the show was streamed, with winners accepting remotely from their homes. 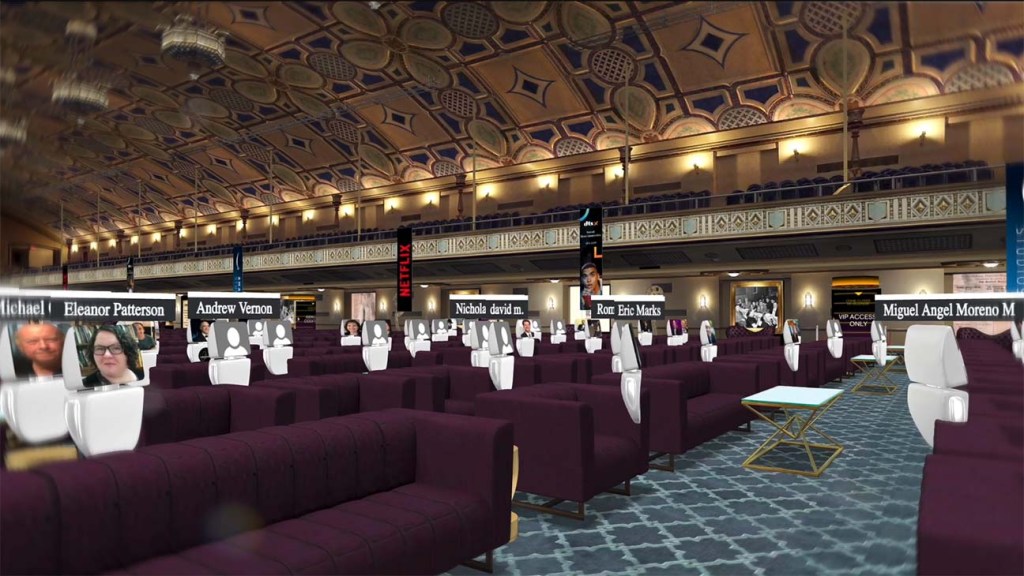 The event space also allowed guests to “teleport” into a photo booth for pictures, and, after the show, to an “afterparty” held on a virtual rooftop with an ocean view at sunset that aimed to replicate a Cancun resort.

Karen Dunn, principal of KMD Productions, the event planner, related that she was brought on last October to help MPSE produce the virtual event, with an aim of re-creating as much as possible the feel of its annual in-person gala.

After testing numerous platforms, they choose Allseated’s approach for its interactivity. “After 14 months, the more interactive you can be on a virtual platform, the more people enjoy it,” Dunn said. “I didn’t know if we could reproduce the feel of the in-person event, but I think we came pretty close. It’s challenging.”