It’s just the start of the year, but the end of the world — at least, that’s the case for Superman’s home planet of Krypton in the new young adult graphic novel series House of El, which launches with this week’s release of House of El Book One: The Shadow Threat.

Set on Krypton in the lead-up to the destruction of the planet — which sends Kal-El to Earth, creating Superman — the series by Claudia Gray and Eric Zawadzki follows two teenagers negotiating not only an upcoming apocalyptic event, but also the complex class structures that make up Kryptonian society. The trilogy is the latest in DC’s successful line of YA and middle grade graphic novels, which use existing DC properties for stand-alone stories not tied to its core superhero continuity.

The Hollywood Reporter spoke to Gray and Zawadzki about the first volume in the series, with an exclusive preview available after.

Let’s start with the obvious question. Where did this book come from? There have been multiple stories set in the era of the Superman mythos that House of El takes place during — the last days of Krypton — but this is something different from all of them. Even the title is almost misdirection. The House of El plays an important part in this first installment, but this isn’t a story about Superman’s parents Jor-El and Lara.

Claudia Gray: The book came out of the question of, “Why do these incredibly intelligent, super advanced people not know that their planet is gonna blow up?” They clearly have technology that would allow them to get away — Kal-El gets away — but they clearly weren’t ready to face it and and help more of their society survive. Why is this? What if this society is so planned, and so structured and so artificially constructed, with everybody just in their one particular little place, that they’ve lost the ability to see something that doesn’t fit in to that framework?

That framework, the sort of caste system that they have the rules that everyone is pre-determined into, is such an interesting framework for this book. It feels entirely fresh, but it also ties into previous depictions of Krypton in earlier Superman comics. I’m wondering, how aware were either of you of the previous incarnations of what came before?

Eric Zawadzki: I wanted to research as much as possible, and look at everything from what [1980s Superman writer and artist] John Byrne did, to more modern versions like Gene Ha, including the fashions and everything else. I sent the initial designs to editorial, and I was told, “Please disregard all that.”

Basically, they told me, “We hired you because we want this to be as unique as possible, and not beholden to anything prior.” Which was so nice to hear, actually! So I kind of threw all that aside and start from scratch.

Gray: For me, I saw Superman: The Movie when I was eight, and the entire movie, but really that vision of Krypton, imprinted on me really hard. I’m familiar with other versions, but that’s the one that is always going to be the first thing that I think of. Like Eric said, though, we were told, “Don’t do what’s been done before, you’re not beholden to it, you get to do something fresh,” so we did go in that direction.

Eric, once you were told to start over, what was your design process like? You’re not just designing new characters and costumes, you’re having to design an entire world.

Zawadzki: I was given the challenge of creating a world where the class structures divided into the lower levels and the upper levels. Visually, I wanted to find a different way of approaching it, rather than having just super tall buildings. I basically had giant levels of platforms stacked up on top of each other and also the lower levels dug into the ground. Part of the mythology that Claudia has created, which you’ll see more of in book two, is that the cities are kind of organically built through machinery, so I factored in that the technology kind of repairs itself, with patterns of overlapping strips of metal that go on top of these structures. I put a lot of thought into that.

Claudia, what was it like coming up with the social structures in the book? Your Krypton is almost tribal in the loyalty and belief its citizens have in the families and the houses that make up the structure of the planet.

In terms of the idea that Krypton is dying, and people don’t necessarily accept that, or don’t necessarily even see it, it feels like the story is a commentary on today as well. There’s some level of metatextual hyper-commentary about climate change here.

Gray: I mean, it definitely went into my thinking in the beginning, because we, ourselves, are going, “we’re not looking at this disaster that is overtaking us with climate change.” Even those of us who believe in it and are trying to take it seriously, you can’t think about it all the time, or else you’d go mad, wouldn’t you? And now the there’s also resonance with the pandemic, which we 100 percent did not see coming.

Also, the idea of, “oh, you can design this problem out of existence.” No, actually, you really cannot do that. It reminds me of something I saw when Mad Max: Fury Road came out, and somebody had written, like, “my favorite part is that they drive around and waste all their resources, even if they’re running out!” It’s just like today. That really hit me.

The Shadow Threat is the start of a trilogy, and sets up an ambitious story for the remaining volumes. It’s an ambitious book!

Gray: It’s really interesting because, I pitched this as one book, and [editorial] was like, “There’s a lot of world building. Maybe this should be two books.” So I built it out to two books, and then they were like, “what about three…?” I’m thrilled by the vote of confidence, but it’s also like, my first graphic work ever is going to be a trilogy…? Okay, all right…! (Laughs.)

Claudia, what was it like working in the medium for the first time? What was the collaboration like between the two of you?

Gray: Well, we didn’t get to collaborate at first. Originally [editorial] wanted a different artist, and then that person had a serious health issue and had to drop out. Then they wanted a second artist, and that person also had to drop out, and then they announced Eric, and I felt a little like Spinal Tap with drummers: What’s going to happen to this guy? Does he need a warning?

Thank God Eric hit the ground running and was able to come up with a clear vision so quickly, because otherwise I have no idea how he could have made up that lost time. I’m incredibly grateful that somebody with his eye, and his perceptiveness, and frequency, was able to come into the project at that point.

Working in comics for the first time has been a learning experience, and I think very much for the good. I always knew I wrote a little too much dialogue, and now I know for sure. (Laughs.) It’s been good to be able to get down to the essentials. That’s an incredible exercise to undertake.

I understood, mentally, the concept of “let the picture tell the story.” You can know that intellectually, but another thing to actually believe it, to relax into it and trust it. I would say it was well into the first draft of the book before I started to go, “oh, okay, I don’t actually have to say that,” or know that this can show this. That is something I definitely feel is still evolving as I continue working, but it just takes a little while, no matter how well you know it, to begin telling stories in that way.

It’s been a learning experience, and one that I’m hugely grateful for. I think it’s going to benefit my prose work, as well.

Eric, what was it like coming onto the project the way Claudia talked about — did it take awhile to get your bearings and make the characters yours?

Zawadzki: It takes several pages, sometimes dozens of pages, for me to define a character, but I always eventually reach a point where something feels right or feels wrong when I’m illustrating them. The acting is one of my favorite aspects. I enjoyed it quite a bit — these scripts are the perfect ratio of action, and great quiet moments.

What are you expecting audiences to take away from this first book? What do you think the responses are going to be not only from new readers who are entirely unfamiliar with the Superman mythology, but also those who are Superman fans and will likely have preconceptions going into this?

Gray: Honestly, I have no idea what to expect, because this is an entirely new field for me. I’m like, “is this really good? Is this terrible? I guess I’ll find out!” [Laughs] I’m happy with it. I’m thrilled, especially, with everything that Eric has brought to it, which adds so immeasurably, but — I don’t really know! I’m very curious to see how that’s going to go and I think a trilogy of young adult graphic novels is not a thing that there are tons of out there, so I have no idea what to expect.

House of El Book One: The Shadow Threat is available January 5. Read on for an exclusive preview. 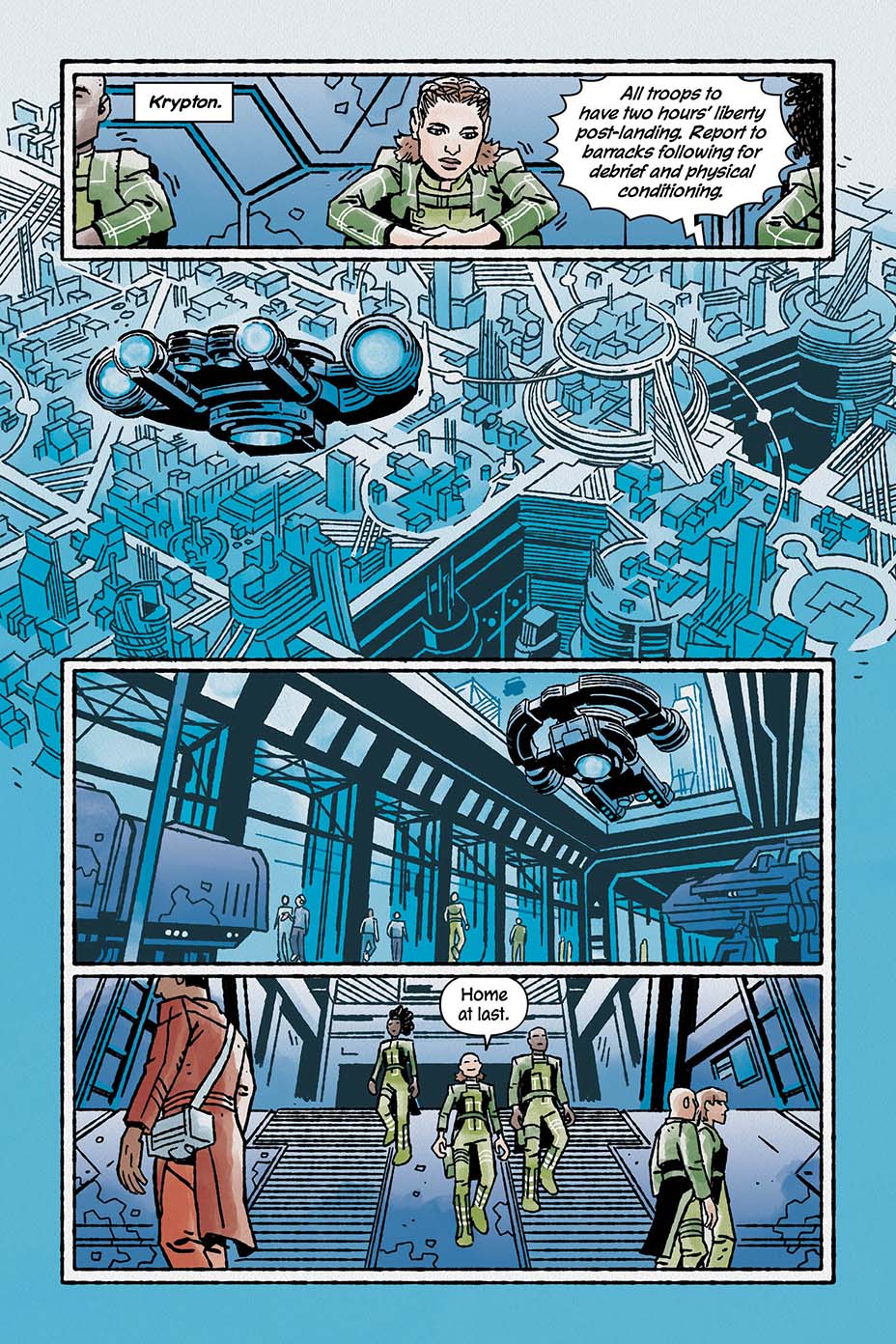 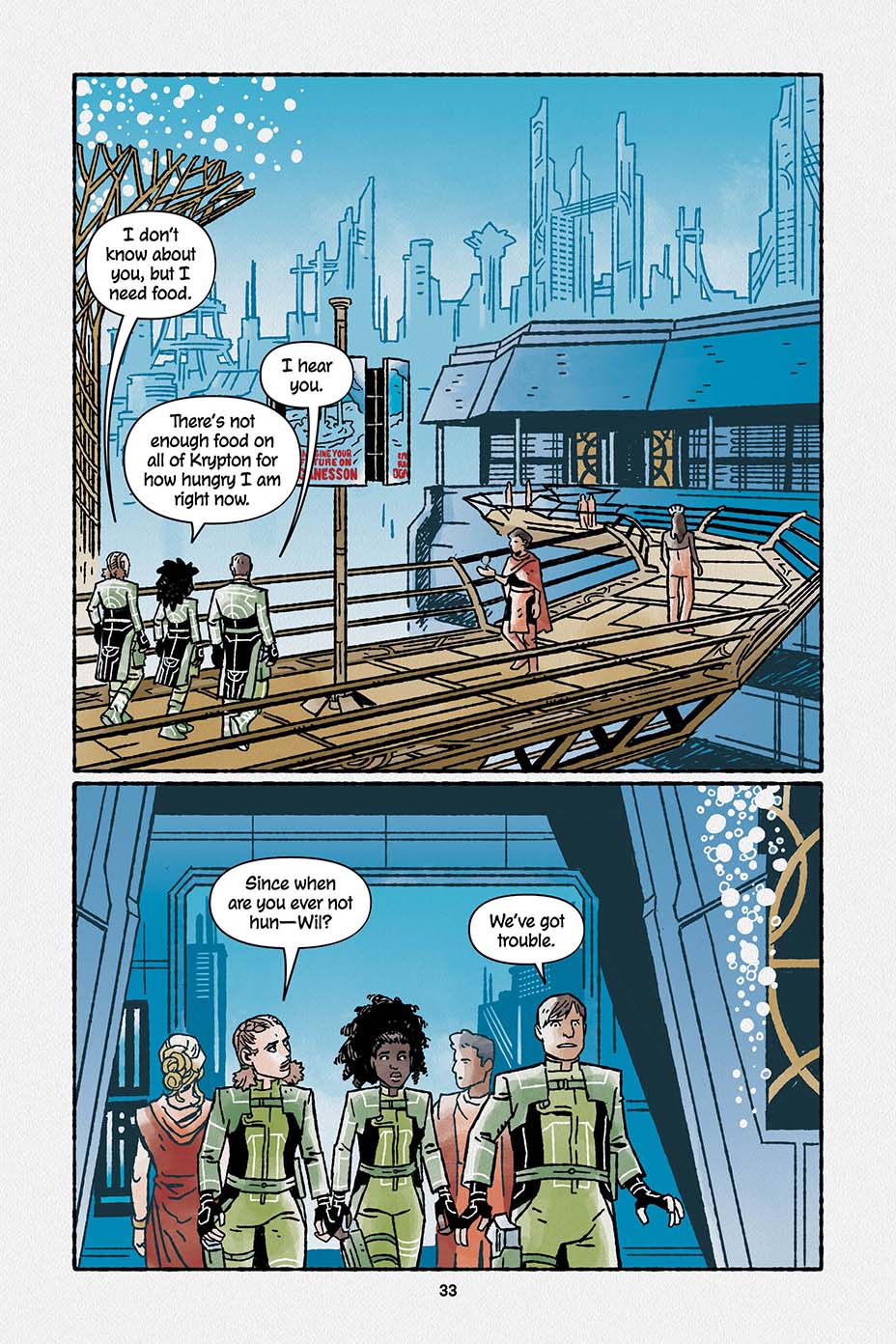 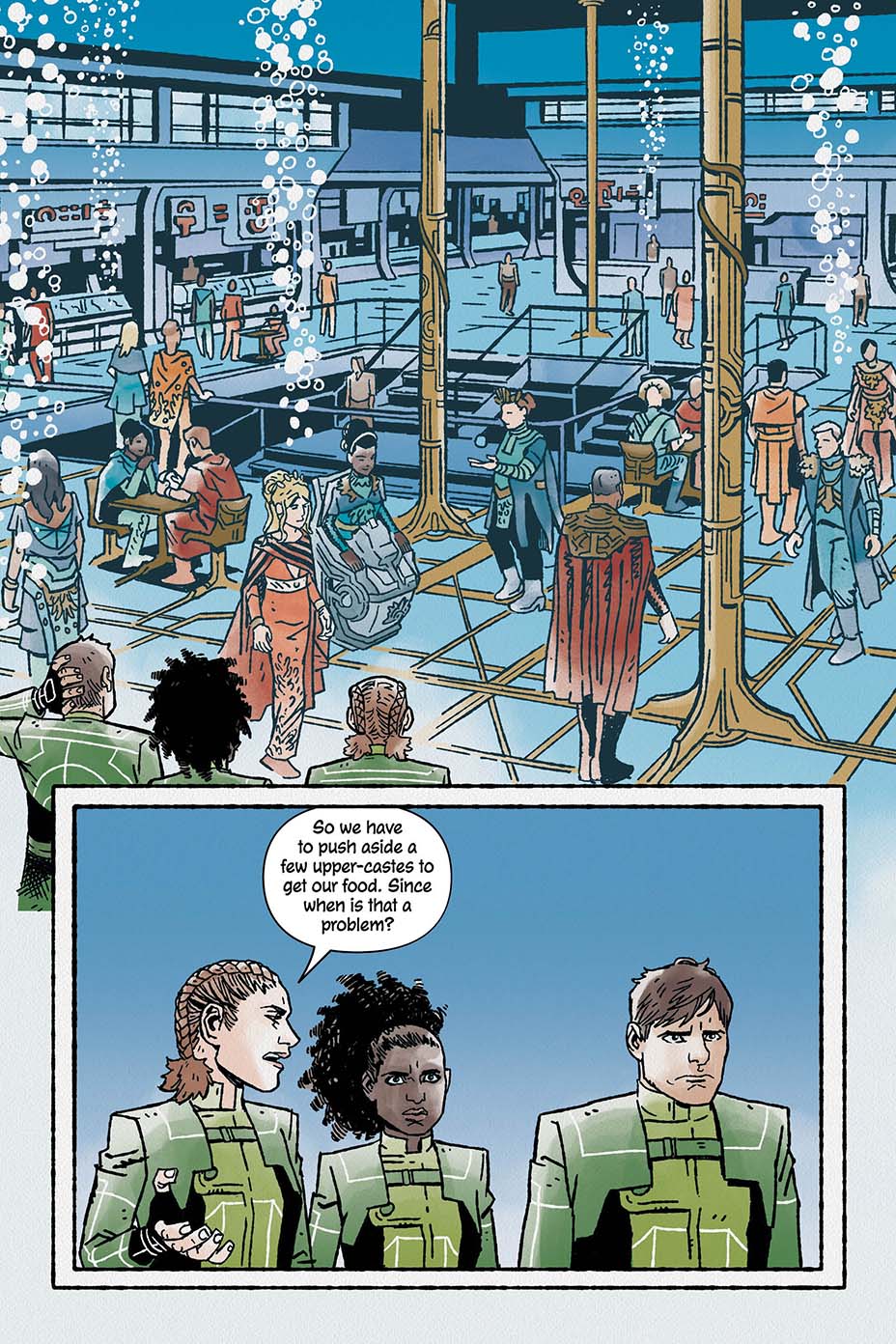 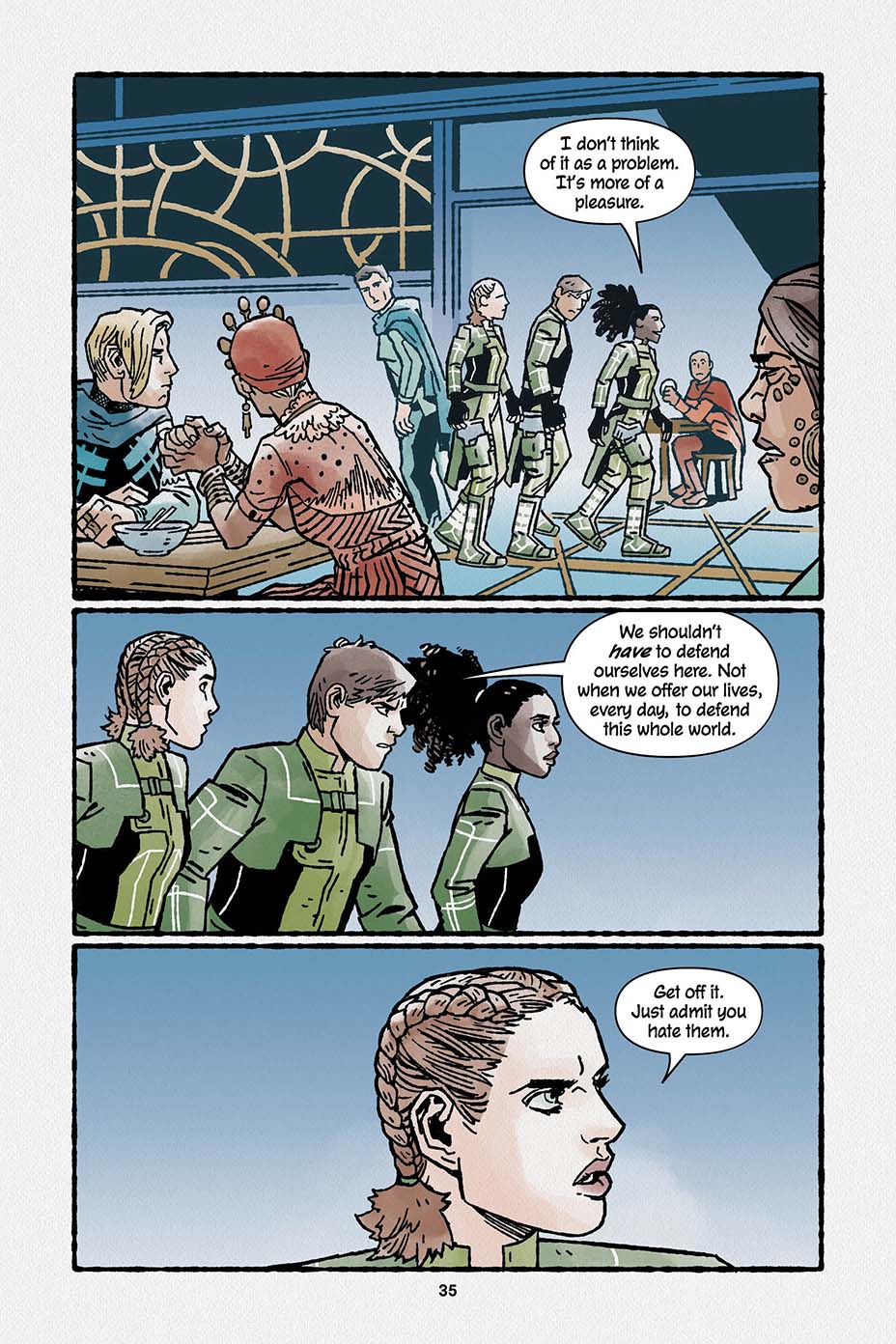 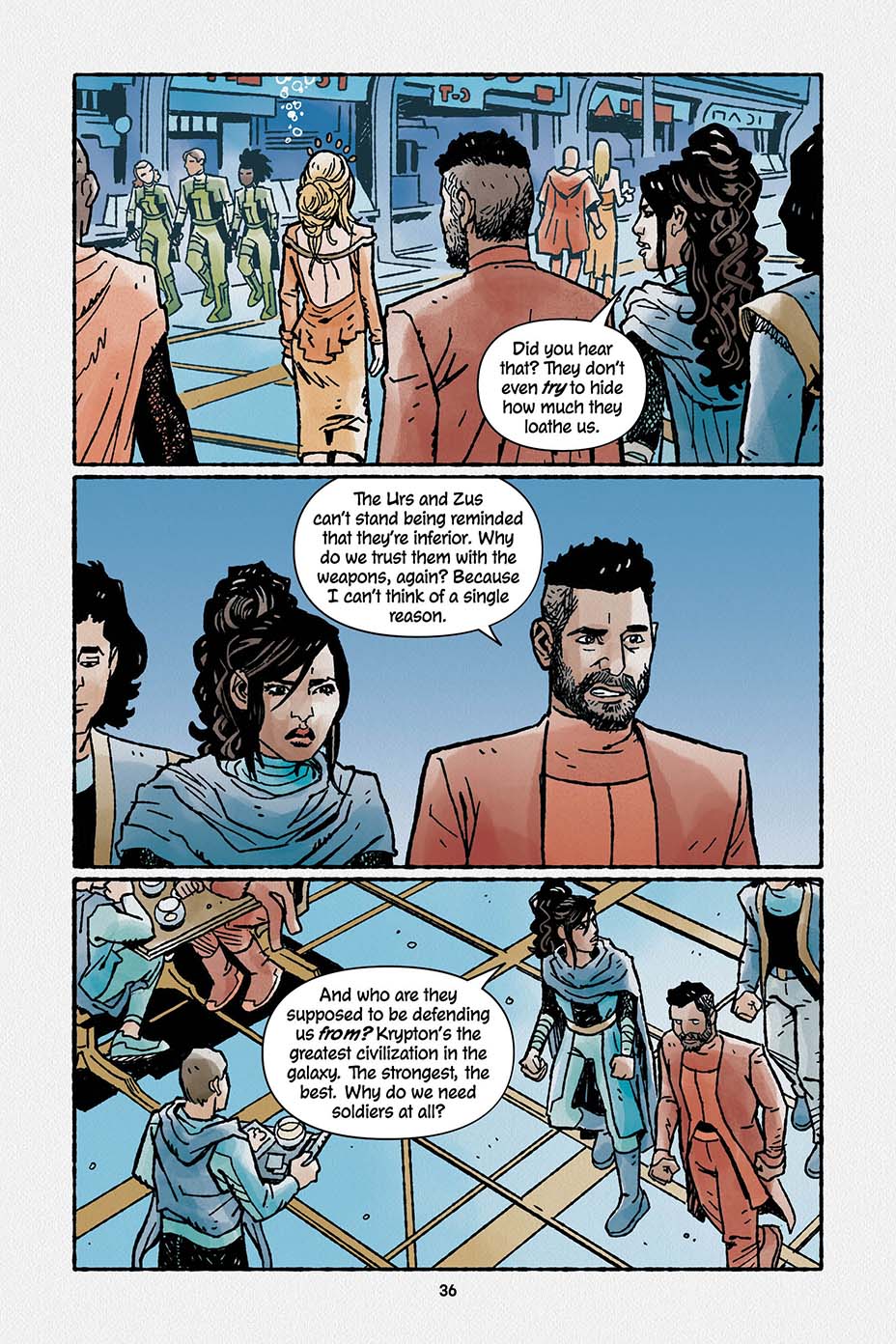 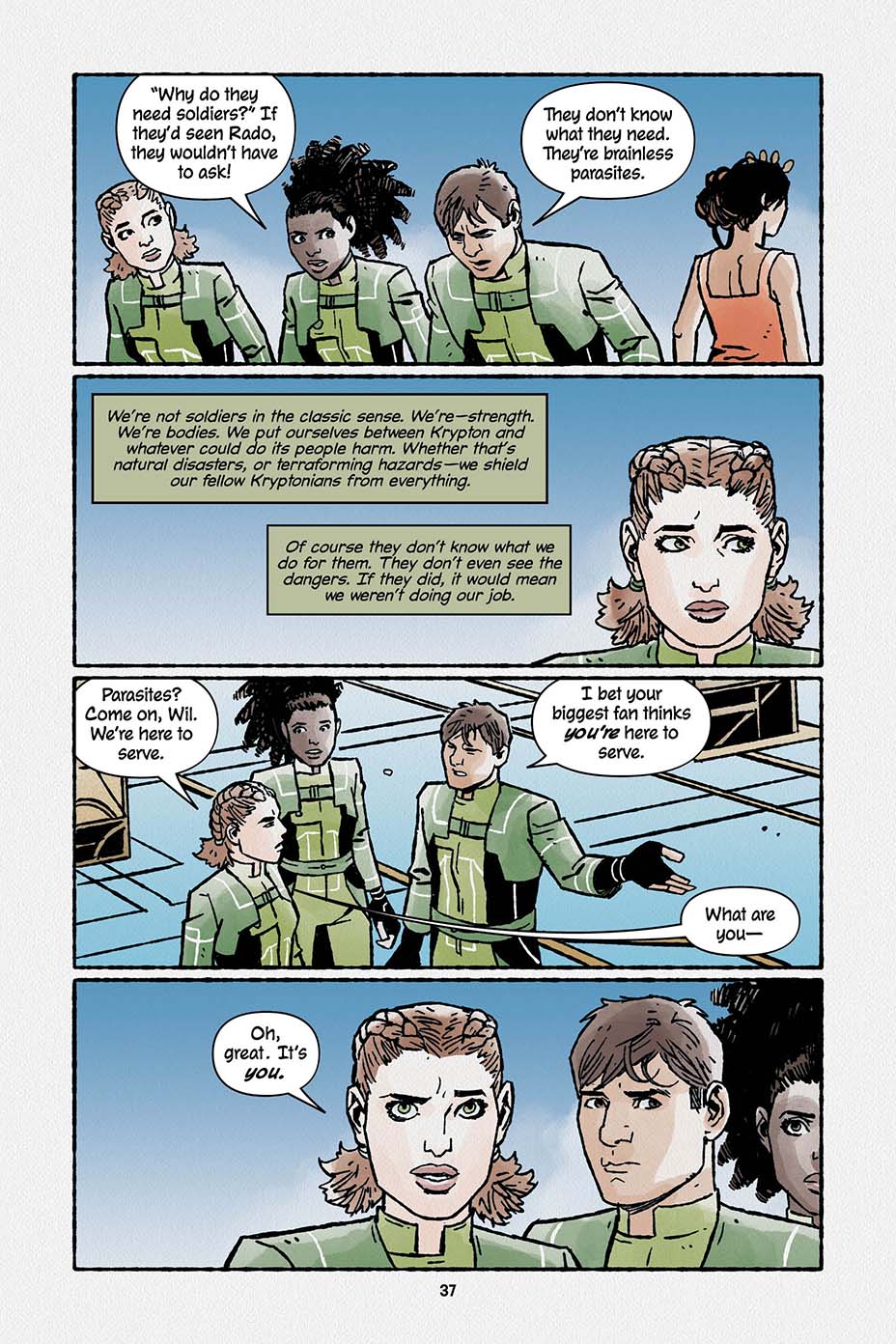 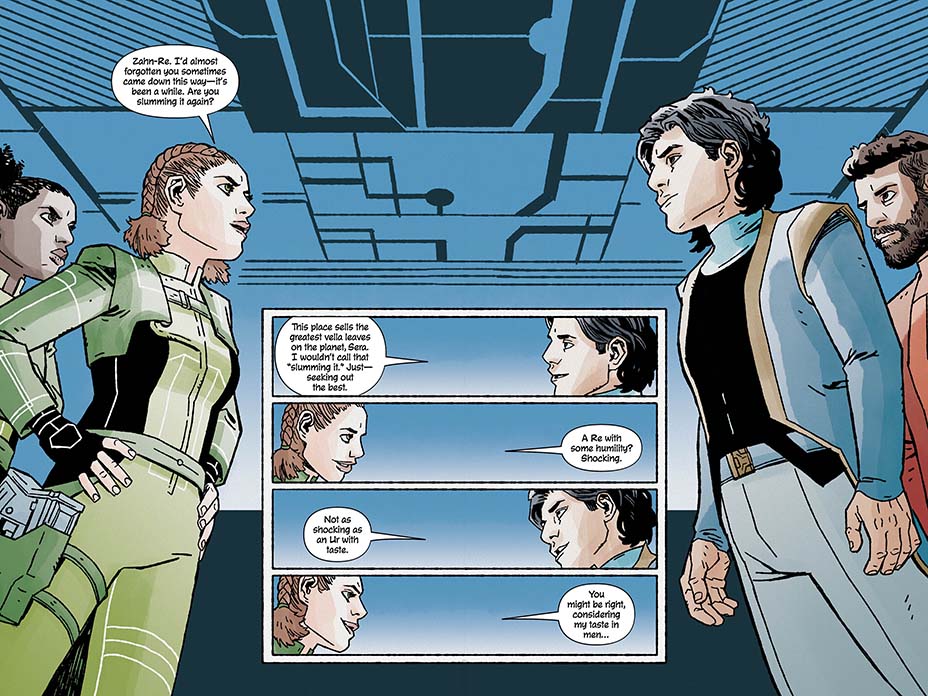