[This story contains spoilers for The Hunt]

The Hunt is #Canceled. Well, at least it was until a month ago. Universal and Blumhouse’s politically charged horror-satire came under fire last year ahead of its September release after concerns over gun violence and criticisms from President Donald Trump over its perceived plot and message. The controversy over director Craig Zobel’s film, written by Nick Cuse and Damon Lindelof, stems from a narrative centered around a group of “liberal elites” hunting “redneck deplorables” for sport in a loose riff on Richard Connell’s short story “The Most Dangerous Game.” The controversy has only aided the film’s marketing and whet the appetites of curious audience members hoping to see something illicit and boundary-pushing in what looks to be one of Blumhouse’s more niche offerings.

Some detractors have labeled the film, prior to seeing it, as needlessly divisive in these trying political times, but The Hunt comments on a division that has already existed thanks to the extremes of America’s identity politics. The Hunt isn’t nearly as controversial as its most vocal critics, or the film’s marketing team, would have you believe. But Zobel’s film is a good one with a fantastic lead, and like much of Lindelof’s work, it offers an invitation for us to unite against an ubiquitous enemy.

From the seeming “us vs. them” narrative at the center of the film, some might mistakenly believe that The Hunt is positioning liberals and woke advocates as villains, with alt-right gun nuts as the victims. But this isn’t the case, and anyone familiar with Lindelof’s filmography and his liberal point of view, something he discussed and explored in HBO’s Watchmen last year, should expect that there’s a more complex situation at play. Where the film lands on that political front is that both extremes are composed of awful people who cling to stereotypes and behavioral extremes as a form of identity. The film makes a point to highlight that the “liberal elites” are all taking part in performative wokeness and virtue-signaling as a means to maintain status. These aren’t true advocates, nor are they representative of America’s oppressed and disenfranchised.

These elites, led by Athena (Hilary Swank), are wealthy, able-bodied and white, and if not white then they are people of color desperately wanting to fit into white circles, even to the point of subjugating themselves to a stereotype, like Mike (Usman Ally). For these people, comments on their white privilege, problematic responses and concern for climate change are just ways to one up each other and prove their moral and intellectual superiority. This practice is not unlike wearing a red baseball hat to champion something that never was, “Make America Great Again,” or keeping a military-grade arsenal for the purpose of arguing for an outdated second amendment. Both the elites and “deplorables” are using the supposed tenets of political party extremes, forged by the internet, as masks to cover up their monstrous nature, while ignoring the people most effected by their culture war.

Our political affiliations allow us to create narratives and shape our reality. The idea of being on the left or the right, Democrat or Republican, allows perceptions that can be taken to extremes and manipulated by those in power, many of whom don’t care about individuals, but only their ability to collectively form a red or blue state. This use of narrative to re-create reality lies behind the central reveal in The Hunt. Athena and her group of Elites lost their jobs after a text message chain where they joked about hunting and killing deplorables went viral.

That text message chain became a source of conspiracy on Reddit boards, social media and podcasts with a number of alt-right supporters believing liberals really were hunting people like them and spreading that idea. In an act of retaliation, Athena and her followers decided to make the right-wing conspiracy a reality and hunt down the people who had started it. The Hunt may not be subtle in its approach, but it does hone in on a certain truth behind cancel culture and conspiracy in an age where machines allow us to end careers, change lives and control information.

Roger Ebert referred to movies as empathy machines, and surprisingly that was the term I kept returning to while watching The Hunt. The irony talking about empathy in a film that opens with half of its cast being gruesomely murdered with brain matter and ribbons of guts decorating the battleground isn’t lost on me. But it’s the source of where that empathy comes from that’s surprising. No, the film doesn’t ask us to feel bad for the right-wing nuts and liberal performance artists, and given the film’s unmistakable satirical approach it feels safe to laugh at the extremes of ultraviolence and political generalizations presented onscreen. But The Hunt does ask us to empathize with those caught in between two warring political parties who don’t really care about people. In this case it’s a single individual, Crystal (Betty Gilpin), who anchors the entire film and makes it one worth remembering. 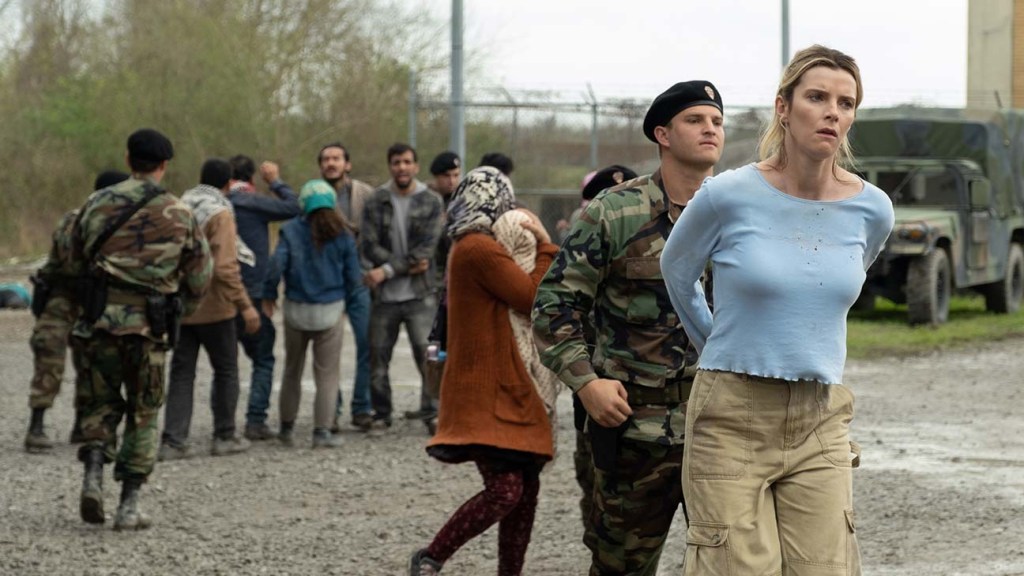 Crystal is grouped with the deplorables, and her Mississippi accent, military background and unemotional responses that suggest psychopathy all work in service to create a character we’re supposed to believe fits in with the alt-right characters she’s surrounded by. But the longer we follow Crystal the more we get to see behind the veil, and that her Terminator-esque behavior is a mask to hide her own deeply felt emotions and fear. She is, in effect, the film’s empathy machine, feeling too deeply rather than not at all, and with her seeming psychopathy revealing the true psychopathy that surrounds her. Even as the film puts her in an empathetic position, it’s still hard to entirely let go of the idea that she is a deplorable, that perhaps she is undeserving of our empathy. But the thing is, she’s not a deplorable at all, and it turns out Athena captured the wrong Crystal. Rather than a liberal-hating product of meth dealers with a middle-school education, Crystal is an average working-class American citizen caught in a frustrating political system.

The battle between Crystal and Amber once again comes down to narrative. Ok, well there is an awesome climatic fight scene with kitchen appliances and a lot of broken glass, but thematically that battle is about narrative. Athena sees the Hunt as an allusion to George Orwell’s political satire Animal Farm, and even includes a pig dressed in clothing on the hunting ground in act of intellectual snobbery that she assumes uneducated deplorables won’t understand. Athena goes as far as to refer to Crystal as Snowball, Orwell’s idealist pig who becomes corrupted by power. But Crystal, who has also read Animal Farm and can debate who best represents Snowball, has a literary allusion of her own, that of “The Tortoise and the Hare,” which she retells in a powerful monologue, albeit with a Southern fried embellishment that ends with a gruesome conclusion of the Hare killing the Tortoise’s family, then him and then devouring his dinner.

The Hunt leaves us with complexities of Orwellian satire versus the simple truths of Aesop’s Fables. Who really represents Snowball? Who represents the Tortoise and who the Hare? Is it Crystal or Athena? Is it the liberal elites or the deplorables? At the end of the film, Crystal sees a rabbit, referencing her earlier story, seeming to suggest that the animal represents her. But it’s also worth noting that we don’t see Athena’s body, although she seemingly died from her wounds before Crystal passed out. What The Hunt leaves us with at the end is a bloody valentine to the working-class hero who was saved by her own authenticity, but whose newfound peaceful existence is temporary and still threatened by performative political affiliations that threaten to devour everyone and everything.