Chris Meledandri may spend most of his time at Illumination Entertainment’s headquarters in Santa Monica, but he always has an eye on the company’s animators in Paris.

The company’s main office occupies a loftlike space in Santa Monica that houses as many as 100 employees at one time — among them, its story teams as well as the marketing forces commanded by Gail Harrison. Meanwhile, more than 5,600 miles away, just blocks from the Eiffel Tower, stands the actual studio, Illumination Mac Guff — home to more than 850 animators overseen by Janet Healy, who serves as co-president of the animation facility alongside its founder Jacques Bled.

With three to four films in various stages of production at any one time, the work goes on around the clock — literally. “My goal was to erase the geographic distance between Los Angeles and Paris through communication and very basic, readily available technology,” says Meledandri. 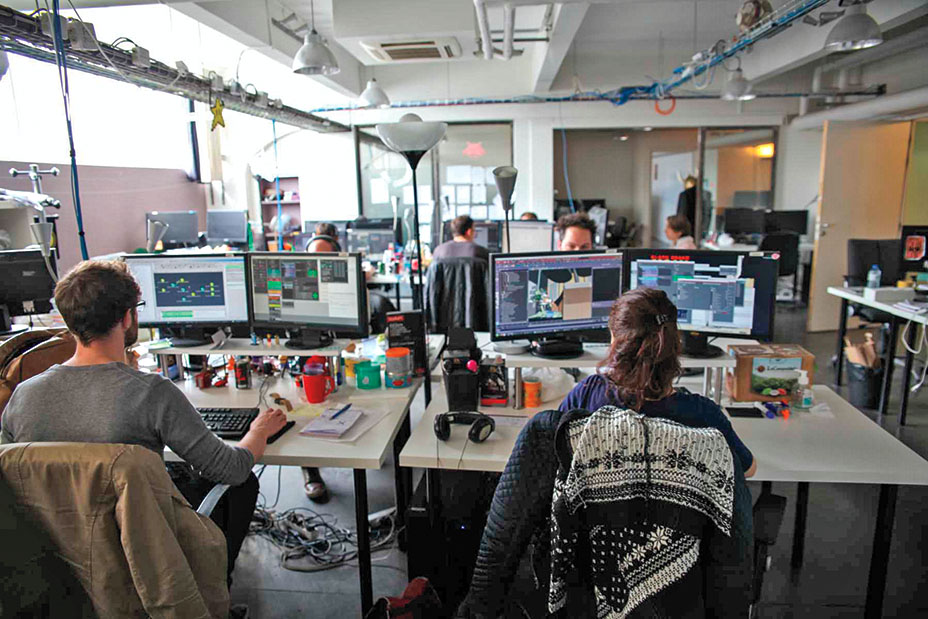 Three times a week, as the workday ends in Paris, an Avid editing machine is synced up with another Avid in Santa Monica. Communicating via Skype, one of the Parisian teams shows off the footage it has completed during the day to Meledandri and his writers, who are just beginning their day in L.A. With notes in hand, the L.A.-based writers tackle whatever problems have come up, and their new pages then are sent off to Paris so that the animation team can address them the next day. “It’s not really that high-tech,” says Healy. “Just this giant, well-oiled machine. We spend about 35 minutes on each show, each day, looking at the work that got notes the day before or new work that needs to go into production. Chris approves character design, the color of the movie and sets, the story reel, script, animation, lighting, all the dialogue that we’ve cut in.”

Adds Garth Jennings, who moved his family to Paris nearly four years ago as he directed Sing: “It doesn’t feel like two separate places. And Chris can see things — he can spot trouble in the distance, a narrative plot point or a design idea that would need too much explanation down the road. So he is great at keeping ideas from running away from the production.”

Unlike Pixar and Disney, Illumination doesn’t rely on a so-called “brain trust,” a group of directors and writers who meet regularly to critique the work in progress. Instead, Meledandri likens his frequent collaborators to a repertory group: Pierre Coffin and Chris Renaud, who now have directed multiple films; the writing team of Cinco Paul and Ken Daurio, who began work on The Secret Life of Pets, and Brian Lynch, who came in to finish it; Brett Hoffman, who serves as a frequent associate producer; production designer Eric Guillon, whose character designs, says Meledandri, often suggest possible plot developments; and even Steve Carell, who first worked with Meledandri on Fox’s Horton Hears a Who! and helped develop Despicable Me‘s villainous Gru. “So what we have,” says Meledandri, “is a community of really smart people, and I tend to deploy them when I see needs that I think one of them can address.”

The process did require some adjustment on the part of the French animators, admits Healy, who worked at ILM, Disney and DreamWorks Animation before joining Illumination. “They were used to someone delivering the storyboards and saying, ‘Go make the movie, that’s the blueprint,’ ” she says. “But how we make a movie is we look at it over and over and over again, always working things through and changing, making sure a joke lands or a character arc is as clear.”

Currently on the drawing board is one of Illumination’s most daring challenges yet, a new adaptation of Dr. Seuss’ How the Grinch Stole Christmas, for release in 2018. Meledandri earned the confidence of author Theodor Geisel’s widow, Audrey, when visiting her every few months at her home in La Jolla, Calif., to review progress on Fox/Blue Sky’s Horton. Pleased with the results, she suggested that Illumination tackle 2012’s The Lorax and now has entrusted Meledandri with the Grinch.

Even though the new CG film will have to compete with Chuck Jones’ classic hand-drawn TV version, which first aired in 1966, Meledandri is confident that for this new Grinch, voiced by Benedict Cumberbatch, “we’ve located a performance style that is absolutely singular. The key has been finding his vulnerability so that we have emotional access to him regardless of how wicked he might be.” Adds Healy, “It will be a look nobody has seen before: really rich and great for the holidays.”