Continue to The Hollywood Reporter SKIP AD
You will be redirected back to your article in seconds
Skip to main content
December 13, 2019 9:23am

The $962 million worldwide box office for 2017’s Jumanji: Welcome to the Jungle was, if not surprising, at least more than seemed to be expected ahead of release. Now Sony is hoping lightning strikes twice as it puts Jumanji: The Next Level in theaters.

Like the first movie, the sequel’s story features individuals being sucked into a video game, taking on the looks and abilities of the game’s characters. This time around, Spencer (Alex Wolff) has gone missing in the game, leading his friends, Bethany (Madison Iseman), Martha (Morgan Turner) and Anthony (Ser’Darius Blain), to go find him. Before they can once more enter the world of Jumanji, Spencer’s grandfather, Eddie (Danny DeVito), and his friend Milo (Danny Glover) wind up being drawn in.

Eddie takes on the role of Smolder Bravestone (Dwayne Johnson) while Milo becomes Franklin “Mouse” Finbar (Kevin Hart), with Martha transforming into Ruby Roundhouse (Karen Gillan) and Fridge into Professor Sheldon “Shelly” Oberon (Jack Black). While everyone gets used to having bodies and powers much different than their own, they have to navigate brand new areas of Jumanji while interacting with new characters and evading all new dangers.

Sony’s marketing for the film has sought to make the movie seem familiar to the audiences that made the first movie a success while also highlighting the changes to the story, especially the incorporation of DeVito and Glover to the cast. Reviews have been generally positive, giving it an 68 percent “Fresh” rating on Rotten Tomatoes.

The first poster (by marketing agency BOND), released in September, shows the faces of all four main in-game characters looking perplexed and surprised at the camera while surrounded by a troop of mandrills, establishing the exotic nature of the story and its setting.

A month later, the second poster (by marketing agency The Refinery) shows the four in the midst of their adventure, with more of the mandrills posing threateningly around them. In the background we see lots of vine-covered rocks, dangerous-looking bridges and snowy mountaintop fortresses.

At about the same time the theatrical poster was released showing the four leads looking heroically off to the side, this time with a single black horse — Cyclone, the new avatar taken by Bethany — in the back.

In early November, a series of character posters (by BOND) came out that spotlighted Smolder, Ruby, Franklin, Sheldon and Cyclone along with Jefferson “Seaplane” McDonough (Nick Jonas) and Ming Fleetfoot (Awkwafina). Each placed an individual character in front of a different location within the game, showing audiences the various dangerous surroundings the story takes them to.

The Dolby Cinemas poster features the same elements shown on the theatrical one-sheet, just rearranged and slightly washed out to try and give it a more artistic and unique feel. A poster for 4DX showings put the cast in the middle of two gibbons staring at each other as if they’re climbing a narrow ravine.

Early July saw the release of the first trailer (31.7 million views on YouTube), which starts by showing how Spencer hasn’t talked to the others in a while. He has found some sort of old Jumanji cartridge and is missing when Fridge, Bethany and Martha come to see him. Martha and Fridge get sucked into the game, but while Martha is the same character Fridge is now the the pudgy academic. The rugged explorer and his aide de camp are, unexpectedly, Spencer’s grandfather, Eddie, and his friend, Milo, creating new challenges for everyone. There’s lots of new adventures as they search for Spencer, as well as plenty of opportunities for jokes about hips and strokes since there are two old men stuck in much younger bodies.

The final trailer (19.6 million views on YouTube) came out in October. It hits most of the same beats as the first spot, promising lots of new and exciting body swap comedy and action set in a variety of different exotic locations.

A special Halloween video was shared that day with Hart trick-or-treating at Johnson’s home while dressed as the former wrestler, only to leave disappointed and candyless.

Virtual reality game maker The Void announced Jumanji: Reverse the Curse in early November. The game, scheduled to launch at Void locations just before the movie comes out, allows players to assume the identities of the film’s characters and engage in a full VR adventure.

+ A YouTube Photo Effect allowing users of the YouTube app to add their own photo to elements of the story.

+ Explore Jumanji, a mobile augmented reality experience that overlays maps and other locations from the film to the world around you.

+ There was also an explicit effort to lure in gaming aficionados by adding an early screening of the film to the live broadcast, hosted at select Cinemark theater locations, of the recent Game Awards.

? Zaxby’s, which ran co-branded commercials showing video game players being sucked into their game, only to find themselves at one of the chain’s locations enjoying some limited time chicken sandwiches.

? Uber, which was featured in a commercial that has the movie’s characters needing to order a car to outrun rhinos (again) before realizing they forgot Mouse (again).

? The Ad Council, which had Johnson appearing in a spot meant to raise awareness of teen bullying and encourage young people to be careful in what they say to others.

? Walmart, which offered a selection of exclusive toys based on the movie as well as a digital comic with an “untold” tale from within the world of the game.

? Pop Secret, which offered promo codes for free movie tickets with the purchase of select boxes of popcorn.

Online ads used the title treatment along with video pulled from the trailer to drive awareness and traffic to the movie’s website.

The cast all gathered for Thanksgiving dinner in a fun little video that once again shows Hart being excluded from the group to comedic effect. Later on, the cast gathered (albeit reluctantly) for a holiday sing-along.

There was a strong promotional emphasis on the Latin American market, especially in the last month or so of the campaign.

That included a “Telenovela”-type video that has the cast (except for Hart) overdubbed in Spanish for the Univision network and the fact that the movie’s global press tour kicked off in Cabo San Lucas, Mexico. That promotional tour took a turn for the ridiculous when DeVito and Johnson crashed a nearby wedding. Additional tour stops included London, Berlin and elsewhere, all leading up to the Los Angeles premiere on Dec. 9.

Last week Sony released a video Q&A with the cast and director Kasdan, where they talked about returning to or joining the film and what production was like. Imax released a spot encouraging audiences to see the massive adventure on that format’s larger screens.

Just days before the movie hit theaters, what was labeled as an “ASMR Trailer” was released. ASMR, or autonomous sensory meridian response, is a popular format on YouTube where a sense of tingling calm is created through soft whispers and white noise, so the trailer reduces all the dialogue to whispers and replaces sound effects with gentle hissing sounds. It’s an attempt to tap into a cultural touchpoint, something that’s very popular with a variety of internet users, particularly younger ones who often use it as a form of self-care. 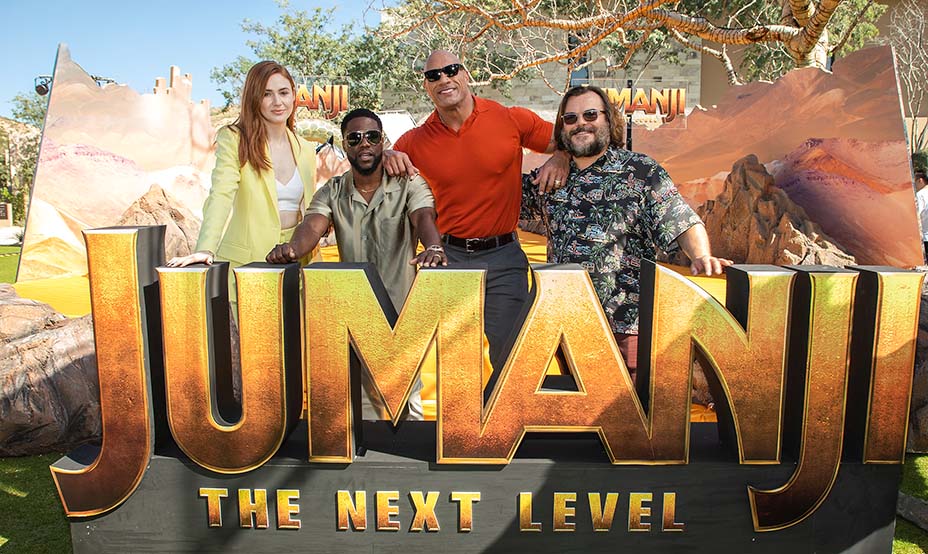 Sony is presenting the movie as familiar to anyone who enjoyed the 2017 original while offering a few fresh takes, mostly focused on different humans inhabiting the avatars of different video game characters. That allows for a new set of awkward, comedic circumstances and all new dynamics between those characters as they set off on another adventure.

The dynamic between the cast — especially Johnson and Hart — is what really stands as the central focus of the campaign, though. Hart gets a lot of mileage out of the idea that he’s underappreciated and often forgotten among the group, both within the story and in the promotional videos that have been released. It’s a conceit that’s been key in the marketing of most of Hart’s films and Sony is using that idea to bring in audiences who want to see more of that.

'Jumanji: The Next Level': Film Review