Before SpaceX’s Elon Musk or Virgin Galactic’s Richard Branson blast off into space, they may want to make sure production designer Guy Hendrix Dyas is on board, since the opulent space-set habitat he created for Sony’s sci-fi romance Passengers would be sure to attract customers.

A description of the movie’s spaceship Avalon might sound like a grand Las Vegas hotel — it has rooms for 5,000 guests, with amenities that include an art deco bar, swimming pool, shopping mall, gaming arcade and various restaurants.

But in the film, which cost about $115 million to produce, the Avalon actually is a spacecraft equipped to take passengers on a 120-year journey to Homestead 2, a distant planet that humans intend to colonize. While it’s designed so the passengers can hibernate for most of the trip, the journey calls for a four-month waking and rehabilitation period just before arriving at their destination — during which they have free run of the spaceship. Complications ensue when Jim (Chris Pratt) and Aurora (Jennifer Lawrence) unexpectedly wake up just a few years into the journey. 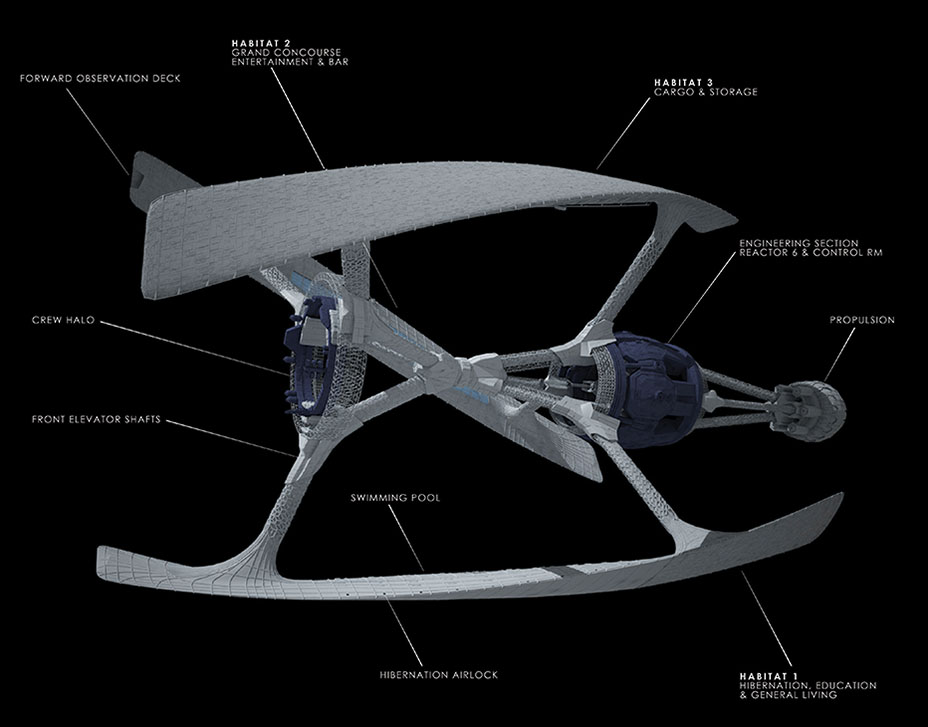 Dyas admits that when he first met with director Morten Tyldum, the script’s description of the ship’s interior was “vague — he was on board for me to design something different, which left the creative possibilities wide open.”

Working with supervising art director David Lazan under tight deadlines, Dyas assembled an art department that had only 10 weeks to put a design together before moving to Pinewood Atlanta Studios, where production was set to begin after another 10-week period.

'Passengers': The Long, Strange Trip to the Big Screen

For the spacecraft’s exterior, Dyas wanted a “poetic and kinetic shape conveying a sense of space and openness as well as vulnerability,” he says.

Inside, the Grand Concourse, from which passengers can access all of the ship’s entertainment venues, became a key set. Conceived as a futuristic mall, the Grand Concourse has holographic advertisements, fountains and meeting areas. “The curvaceous lines were reminiscent of a classic ocean liner and allowed passengers the opportunity to get lost in entertainment and miles of retail that were specifically aimed at encouraging a new beginning on Homestead 2,” explains Dyas.

In sharp contrast to the ship’s futuristic look and cool color palette, Dyas gave the Grand Concourse Bar a 1930s-inspired New York art deco look with warm red and gold colors and rich textures — he calls it an inviting piece of “humanity” aboard the ship. “There are little details that remind you that you are on a spaceship,” he points out. “The walls have art deco friezes, but unlike traditional friezes that showed the industrial age, ours show interplanetary travel.

“I also had to conceptualize things for the couple to do as their relationship grew,” adds Dyas, citing as an example a “very tongue-in-cheek” Japan-inspired holographic dance game. Other Japanese-inspired elements included a sushi restaurant. “All of the restaurants had to have a distinctive feel,” says Dyas, noting that they also include a Mexican restaurant and French bistro. The latter, he says, had to feel romantic because it is where Jim takes Aurora for her birthday. As for those Japanese influences, the production designer explains they came naturally to him: Before getting into film he spent five years as a product designer, including working in Tokyo on the last generation of the Sony Walkman as well as the Discman. 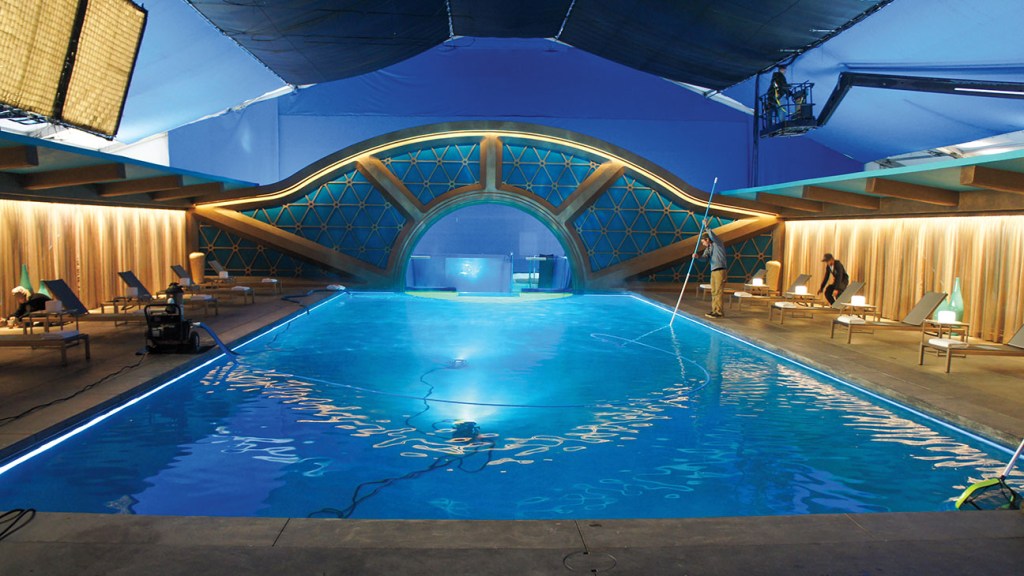 Another key set was the ship’s swimming pool. “That became Aurora’s place of sanctuary,” says Dyas. “We see her in the swimming pool often. It looks like part of a larger health club, so we kept it dark and moody.” The crew actually dug an in-ground pool at Pinewood and built the set around it.

And, finally, there’s the ship’s Observation Deck. “The elegant alloy-ribbed structure was designed to be reminiscent of planets in orbit,” says Dyas. “A collection of asteroids are on display gently reflecting the same aesthetic as the Japanese Zen garden positioned below the huge window out onto the universe.”