Carlo Collodi’s novel The Adventures of Pinocchio has been adapted for the screen numerous times, but for Matteo Garrone’s 2020 film Pinocchio, the director wanted to be faithful to the original book, first published in 1883. The look of the eponymous wooden puppet who longs to be real boy thus started with examinations of the book’s early illustrations by Enrico Mazzanti and Carlo Chiostri.

Prosthetics makeup artist Mark Coulier — a two-time Oscar winner, for The Grand Budapest Hotel and The Iron Lady, who is nominated for Pinocchio alongside makeup artist Dalia Colli and hair designer Francesco Pegoretti — relates that the team started by creating the designs, and once Federico Ielapi was cast in the lead role, they continued to refine the look. “It has to be movable. It has to have expression,” says Coulier. “It has to conform to the actor’s physiognomy, so it did evolve and change [while] maintaining the flavor of original drawings.”

Another difficulty was putting a realistic wood grain on the prosthetic pieces. “It was quite tricky, working on how to sculpt it, to paint it correctly,” Coulier says, explaining that each silicone piece was hand-painted. That was a complex task because every piece was destroyed in the process of removing it at the end of the day, meaning that single-use identical prosthetics were required for each day of production. “You have to be able to hold them up and have them be identical. We had a master paint job, and it was painstakingly [hand-]copied, line by line, grain by grain … We had a team painting pieces during the day, [to] keep three days [ahead of production].” 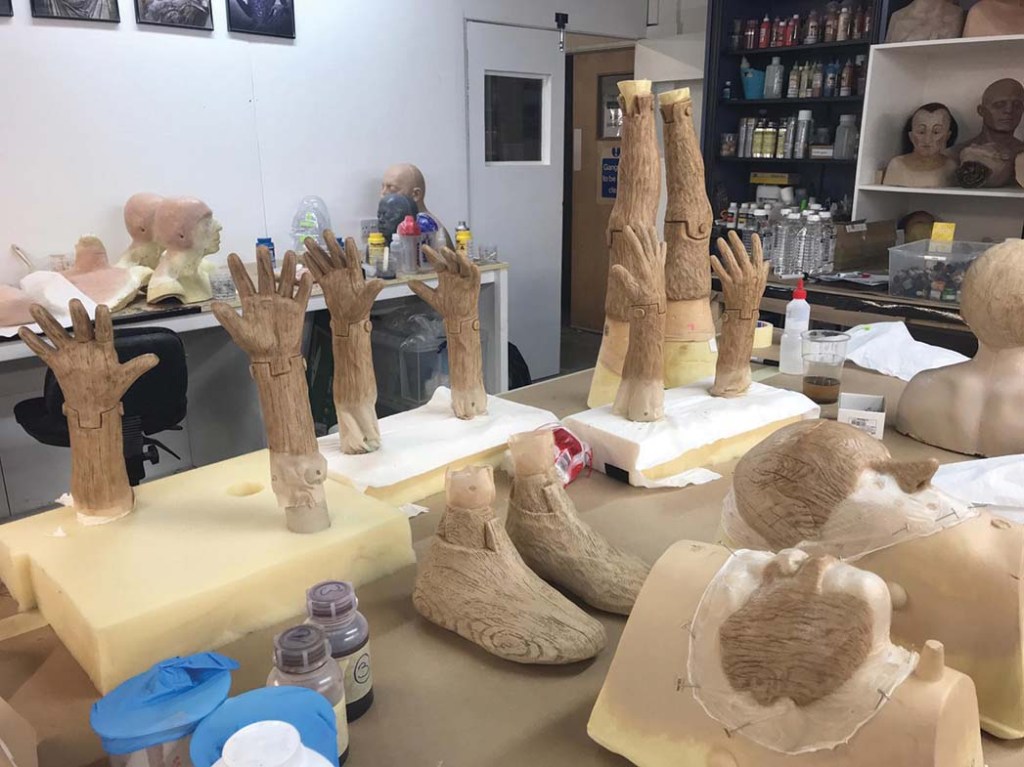 Ielapi, who was 9 years old at the time, would spend roughly three hours each day in makeup, where face, hand, leg and foot prosthetics were attached. “We applied the makeup about 50 times,” says Coulier. “For the arms, “we tried gloves, but the process of making gloves makes them slightly thicker than if you have a prosthetic appliance,” he says. “If you do it as an appliance, you can sculpt them thinner and you get more elegant-looking hands. So I really wanted to change from the gloves to hand prosthetics, even though it added an extra 25 minutes, half an hour in the chair every day.”

The young actor also had silicone appliances on his legs and shoes. “We took a mold of [the shoes] on Federico’s foot, and then we sculpted our silicone boot to make it look like wood over the top of the shoe.”

Coulier admits that, as initially conceived, Pinocchio’s hands, legs and neck were going to be digital. “Matteo always wanted a prosthetic face — for performance, really,” he explains. “Slowly but surely, we realized that the neck would work as a prosthetic neck,” and then it was finally decided to go with full prosthetics. “Matteo just thought that it would work … [and] it would give him freedom on set to capture as much as possible in camera.”

Roughly 25 characters in the film involved prosthetics, including the Fox, Cricket and Snail (played by Maria Pia Timo) and others from the puppet theater of Mangiafuoco. “We built a full snail costume with a full-size snail shell that’s about a meter across and a meter tall,” says Coulier. “And we had [Timo] in a full foam latex snail suit with a silicone snail head and snail arms.”