When Steven Spielberg decided to use Stanley Kubrick’s 1980 horror classic The Shining as the backdrop for a key scene that takes place in Ready Player One‘s virtual reality world of the Oasis, VFX supervisor Roger Guyett of Industrial Light & Magic initially thought he’d use ILM’s Forrest Gump approach by inserting the film’s CG avatars into pre-existing shots. But it quickly became apparent that Guyett’s plan wouldn’t suffice, since new shots were needed that weren’t in the original movie. So the VFX team built the sequence for the Warner Bros. film in the digital realm, knowing that each setting had to be indistinguishable from those in the original.

Steven Spielberg's 'The Fablemans' to Launch in New York and L.A. Theaters Early

“As a very specific detail, we digitally matched the performance of the original lenses from the film and also the grain and quality of the film,” explains Guyett, noting that for reference, his team used the film itself as well as behind-the-scenes footage. Guyett also relied on Spielberg’s own memories. “He was a friend of Kubrick’s and had, in fact, visited him on many occasions whilst shooting the movie,” says Guyett. “I’d never studied a film in so much detail before.”

In the final Ready Player One shots, everything — including the Overlook Hotel’s Great Hall, kitchen, corridors, maze, ballroom and bathroom — was digitally created except for the few human characters that they took from Kubrick’s film. “I didn’t want to get into any kind of uncanny valley situation by digitally creating human characters — especially ones so recognizable — it just seemed unnecessary,” says Guyett, who earned his fifth VFX nomination for Ready Player One. They shot bluescreen elements of any human featured in the sequence: The twins, Kira Underwood (who dances in the ballroom and whom Art3mis meets) and the lady in the bathtub. “For the lady in the bath, we shot a bluescreen body double for her back, and then when you see her face, we cut out the original lady from The Shining and put her in our shots.”

Of all the sets, the maze was a puzzle in more ways than one. “The ‘fake snow’ look — matching the ‘fake’ snow from the original set — was a challenge with so many levels of interaction between the characters and the environment,” Guyett admits.

The Shining sequence also involved simulation work, including creating the river of blood. “I wanted the choreography of the blood coming out the elevator to match the exact performance of the original, and then it had to turn into a river,” Guyett says, adding that the animation requirements included dancing zombies and the performances of Ready Player One‘s characters, who appear as avatars.

To Infinity and Beyond — and Back Again
VFX teams launched into intergalactic spheres while also tending to sweet friends from childhood.

For Winnie the Pooh and the other characters from the Hundred Acre Wood to engage with live-action actors in live-action environments, the key was making the toys feel real. On set, the actors worked with stuffed animals to give them something to hold and interact with while performing. They then were replaced with CG characters, involving new shading techniques so that the hair would respond to light realistically, explains VFX supervisor Chris Lawrence of VFX house Framestore, which collaborated with several VFX houses on the production. A big hurdle was how to make the characters talk. “We were bound by the way a real toy would move,” says Lawrence. “We tried to dial back the performance to make it more subtle. That was the design challenge — the lip sync was more simplistic, like a stuffed toy moving.” — C.G. 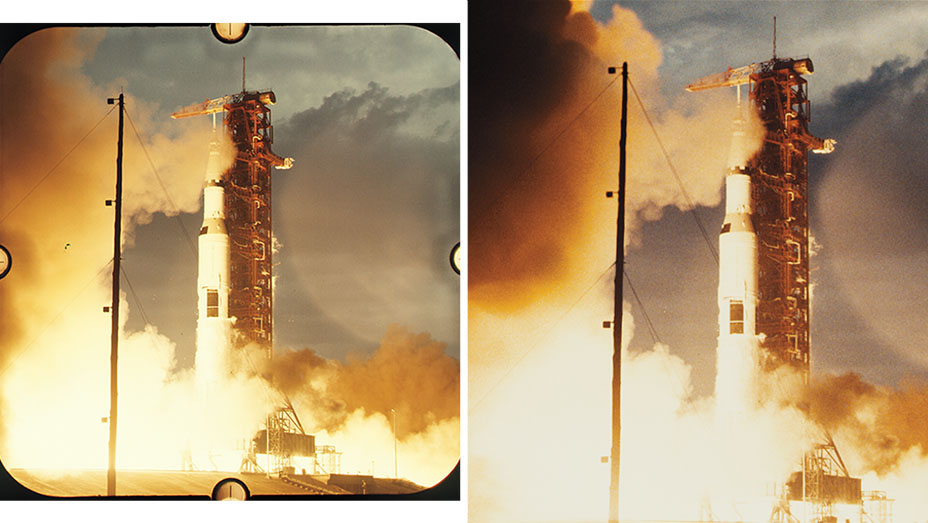 Authenticity was the driving principle behind every decision on First Man, including the launch of the Apollo 11 spacecraft. The VFX team relied on a combination of models, CG and even NASA’s archival footage. “The idea was to take pieces of archival footage and give them a complete digital cleanup,” explains VFX supervisor Paul Lambert of lead VFX house DNEG. “We repositioned the restored footage in the center of frame, and then extended either side using CG or matte paintings.” Pictured is original 70mm footage of the Apollo 14 launch, which was extended to fill the frame with sky and CG smoke. 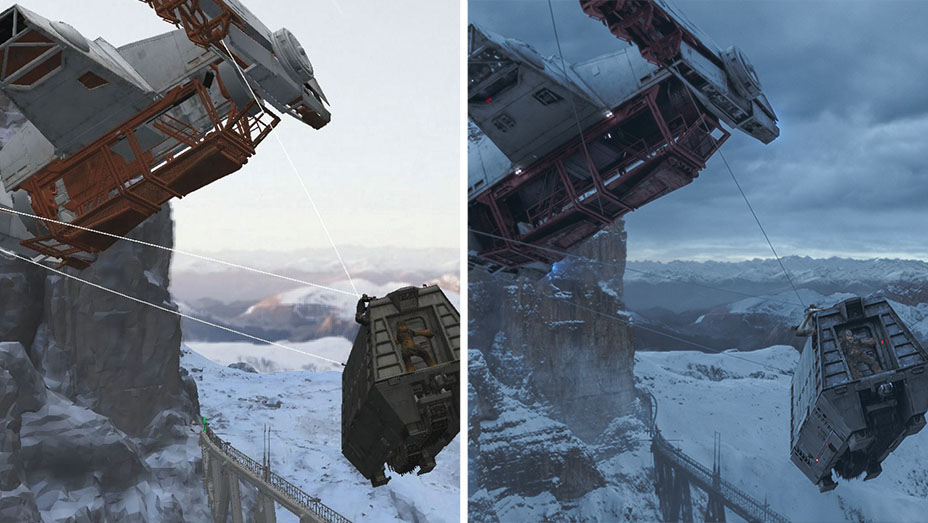 The latest film in the Star Wars franchise features a combination of VFX techniques. Most of the train heist, for instance, combines practical effects and CG. This roughly 10-minute action sequence began with scouting and shooting live-action backgrounds in Italy’s Dolomites mountain range. VFX supervisor Rob Bredow of ILM says his team began work with the live-action photography and also “took new photo models — 42,000 photos — and assembled them into a 3D model with textures of the actual mountain.” Onstage, the actors were shot on a 50-foot train car on a rig that could tilt 90 degrees. 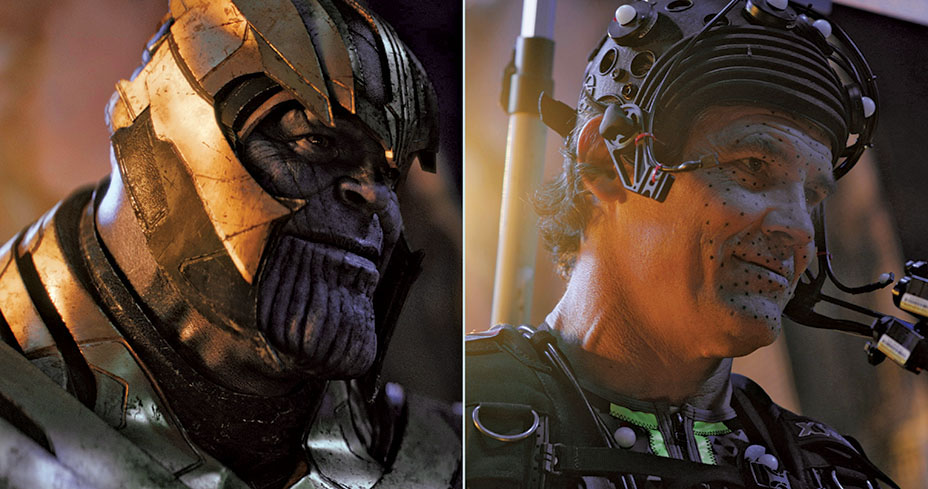 lnfinity War‘s VFX was a herculean effort — the film contained a total 2,703 shots, and 2,623 of them contained VFX — but perhaps nothing was more crucial to get right than Thanos, the CG villain played by Josh Brolin. On set, Brolin wore body- and facial-capture systems while performing, and his facial expressions were also realized using ILM’s Medusa system. “Sometimes there were scenes where actors had to interact with him, so we’d have these very large prosthetics so that once he was the CG Thanos, the volume was preserved,” says overall VFX supervisor Dan DeLeeuw. The work to give the 8-foot-tall humanoid villain his look and performance was shared by Digital Domain and Weta. In all, Infinity involved the contributions of 14 VFX houses. DeLeeuw adds that with so many characters, “you had three finales converging at once. Each of the battles would have been a finale in any other movie, and we had all three in one.”