In Guillermo del Toro’s 1962-set fairy tale The Shape of Water, Elisa (Sally Hawkins) and a fish-man (Doug Jones) fall in love in a lab at a government research center in Baltimore, where the creature is being held and where Elisa works as a cleaning lady.

The look of the room — a set built at Cinespace Film Studios in Toronto — was driven by del Toro’s early concept art created with artists Guy Davis and Vincent Proce as well as cues from the Andrews Building at the University of Toronto in Scarborough, which was built in 1964, and photos of an abandoned sanitarium in France.

“While we could have portrayed the lab as a stereotypical sterile environment, Guillermo and I talked about it being this humid, warm, sort of beautiful though oppressive space,” says production designer Paul Denham Austerberry, who was nominated alongside set decorators Shane Vieau and Jeff Melvin. “Hence, the materials, the concrete and the tiles were very important.”

So, too, was the color palette. “It’s scripted that Colonel Strickland [Michael Shannon] is told by a Cadillac salesman that teal is the color of the future, and so teal was very important to the script and to Guillermo,” says Austerberry. “This whole lab is in the future; they are thinking about the space race. We wanted to tie that color throughout this facility.” 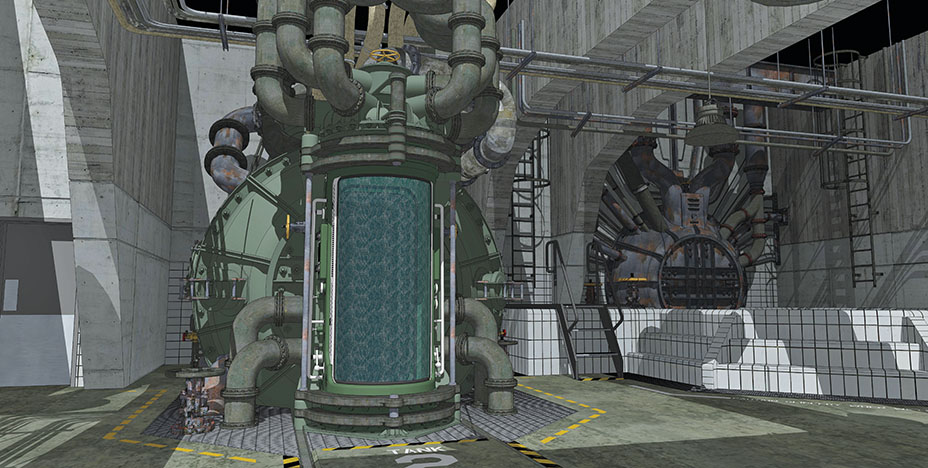 At the lab, the fish-man swims in an indoor pool, where Elisa puts out eggs for him to eat as they become acquainted. Austerberry notes that in the script, he was referred to as “being treated like a god for indigenous people.” With that in mind, the pool was designed in the style of a Ziggurat temple and, behind him, the idea of a setting sun, which was a “structural array of steel painted pipes in the background.”

The captured creature also is held in a long tubelike tank that the script describes as an iron lung, according to Austerberry. “Because they worded it that way, I did research on actual iron lungs from the ’50s, and I found one that was in Germany that was in our color palette in teal, but it had really interesting shapes of the period. I then adapted it to suit our vessel, which was to contain water.”

In the story, the fish-man was found in the Amazon and had to be transported back to the U.S., where he’s held for research. So this vessel also was used to transport him. It was designed to have been pressurized and temperature-controlled, and it was battered and rusted to show the long journey it and the creature had gone on.

Most of the film was shot on stages, but to expand the feel of the government complex, they also used the University of Toronto for location work, including for an interior corridor. About 19 days out of the 58-day production schedule shot in various locations.

“Guillermo had amazing actors, which really helped bring everything to life,” adds Austerberry of the cast, which includes Octavia Spencer, Michael Stuhlbarg and Richard Jenkins. “It was a very special film to work on, I have to say.”

DESIGNING THE PAST AND FUTURE

Beauty and the Beast 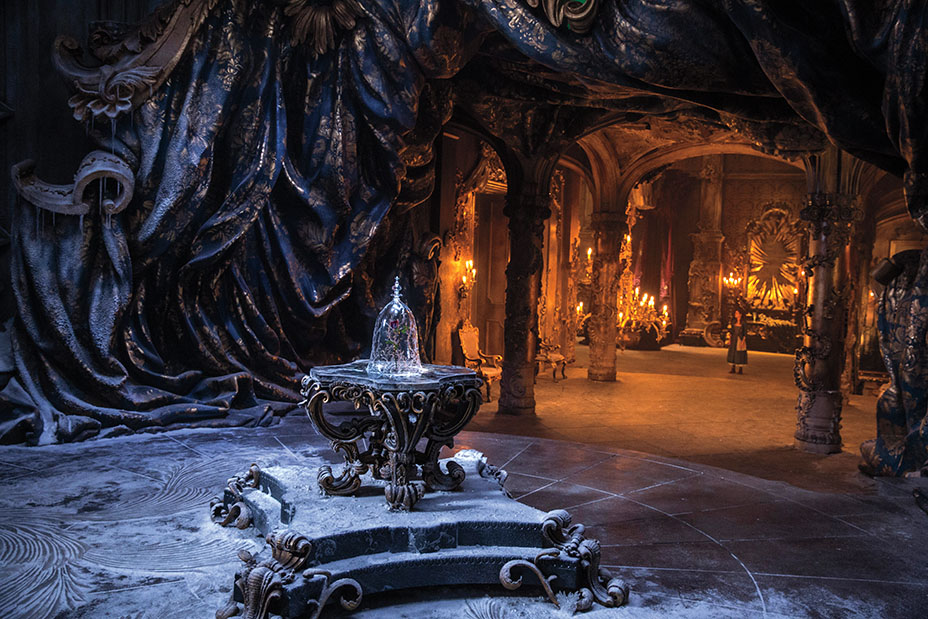 The Beast’s dark lair, where he keeps his enchanted rose under a bell jar, was a roughly 100-foot set built at the U.K.’s Shepperton Studios. It’s based on the Rococo period of 18th century France. “This is the most distressed and disturbed area of the castle, where it has started to crack and fall apart,” says Greenwood. “It’s representative of the time passing and the tension as each petal falls. The jar is made of Swarovski crystal, and we had it etched with the ice motif in England.”

Lensed on a backlot in Budapest, this shot features K (Ryan Gosling) landing in an abandoned Las Vegas. Gassner says the orange tones underscore that this is a “manifestation of a Las Vegas that developed into a new architectural city based on the harshness of the environment,” and K’s spinner “was a continuation of the original design from the 1982 film, for a harsher, contemporary environment.” The roadways and Vegas skyline were added with visual effects to show the history of Las Vegas. 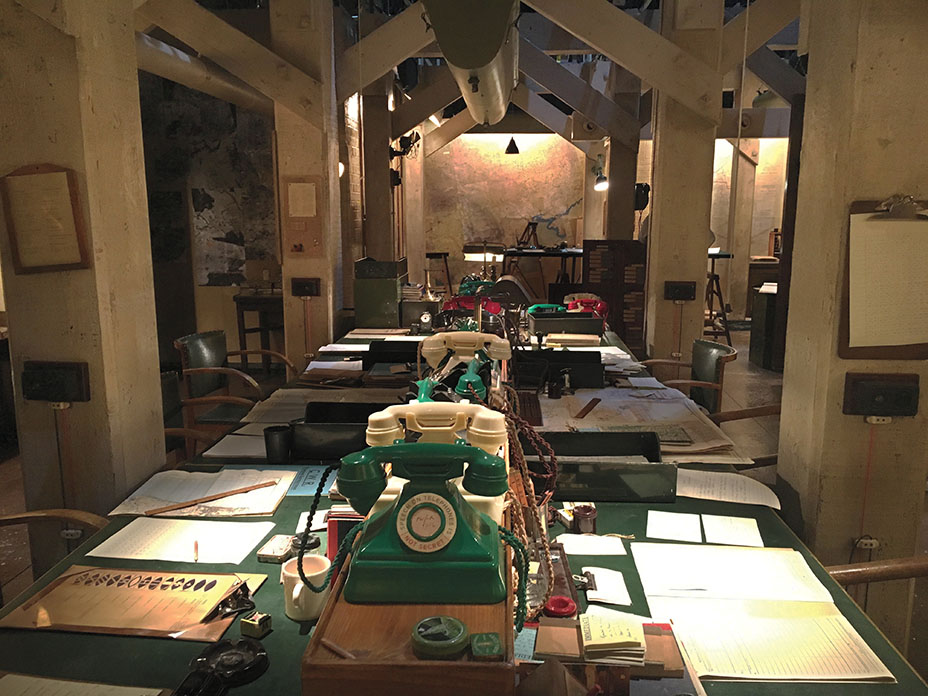 A set built at Ealing Studios in West London, the Map Room was the nerve center for the war that had to have a “raw and makeshift” feel and a historically accurate look. “It wasn’t a very safe place, so they brought in a naval architect to make it more secure,” explains Greenwood. “He worked in ships, so they put in the beams, in case of a direct hit from the bombs.” She notes that everything had to be authentic (“because the camera goes in close”), including the maps on the walls, which were created from real references. 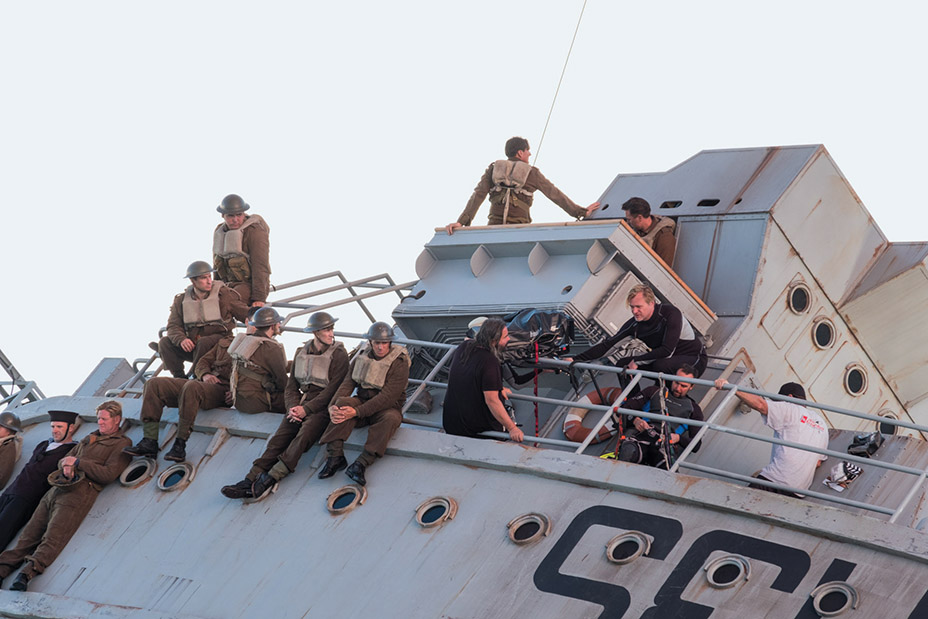 A ship was built in Universal’s Falls Lake tank for shots that were not possible on location at sea. “The idea was to build a ‘Frankenstein ship.’ We decided to try and combine two ships, one side to be the 420-foot destroyer at Dunkirk and the other side to be the 250-foot destroyer from Holland,” says Crowley. “The problem was that they were very different shapes and sizes.” Plus, the ship in Falls Lake could not be more than 80 feet long. They had to force the perspective so it would match up to the original ships’ real size.