Charlie’s Angels is the 2019 update of the classic 1976 TV series about a trio of women who work for the mysterious Townsend Agency taking on cases and clients who need private security and investigative help. Like the 2000 and 2003 movies, this Sony Pictures production, budgeted at $50 million, keeps up the story begun in the show, with Kristen Stewart and Ella Balinska playing Sabina and Jane, two of the agency’s new generation of Angels.

This time Elizabeth Banks takes the helm of the franchise, co-writing and directing the rebooted film series. The plot? When Elena (Balinska), a young computer programmer who feels threatened because of her work, reaches out for help, the Angels are sent to protect her and keep her work out of enemy hands. That involves recruiting Elena into the agency’s work and giving her access to the same weapons, outfits and other resources it has to offer. All this happens under the direction of not one but three Bosleys (Djimon Hounsou, Patrick Stewart and Banks).

Sony’s second attempt at a big-screen Angels franchise (which is sitting at 59 percent on review aggregator Rotten Tomatoes) is hoping to entice audiences with a campaign that’s heavy on exotic locations, incredible dresses and a strong message of women protecting and supporting other women. Here’s a look at the marketing campaign.

June saw the release of the first poster (by marketing agency BLT Communications), which immediately establishes the bond between the core trio, showing them towering over the camera. It’s not overly designed, but it conveys the message that the brand is back and uses the logo of the fictional Townsend Agency, something that has been consistent and key throughout the campaign.

A second poster (by marketing agency Concept Arts) released at about the same time positions the three stacked on top of each other with the copy “Unseen. Undivided. Unstoppable” at the top, helping to explain even more about what audiences can expect.

Further detail is offered on the theatrical poster from October. Sabina and Elena are holding hands to establish their friendship and support while the copy tells us the team is “Sworn to secrecy. Bound by sisterhood.”

There’s a “selfie” vibe on the IMAX poster, which shows an illustrated version of the trio gazing down at the camera while looking fabulous and confident.

Late June brought the release of the first trailer (17.3 million views on YouTube), which serves as a solid reintroduction to the concept and an overview of the story. We meet the Angels while they’re on a job and see what skills each has. They take on a new client, Elena, a young woman concerned the technology she’s working on could be used by criminals around the world. Elena’s introduction to the world of the Angels allows the audience to get a similar look at what kind of weapons, toys and wardrobe the team has to work with. The rest of the trailer is filled with lots of fight sequences, humor and more to show everyone what they can expect in theaters. Notably, the trailer features a new version of the classic theme song from Miley Cyrus, Ariana Grande and Lana Del Rey, a major selling point for the film.

It was early October when the second trailer (5.2 million views on YouTube) came out. This one skips showing much of the story of how Elena meets up with the rest of the Angels and focuses instead on her training to join the team. It’s much more about the glitz and glamour of the life the Angels lead as they right wrongs, with great clothes, great gadgets and other accessories. Banks’ role not only as an actor but also the movie’s writer/director is also a significant part of the message of this trailer, which ends by letting the audience know when the film’s soundtrack will be released and what superstar artists have contributed songs to it.

In April, Banks appeared on stage at CinemaCon to talk about the movie’s casting, production and story, promising exhibitors audiences would have a good time with a film that would surprise them. Shortly after that, a first photo of the cast was released to give everyone a look at the stars in character.

With Sony opting out of big panels and other promotions at San Diego Comic-Con earlier this year, the movie didn’t have a presence there, despite it seeming to be a natural fit for that audience.

The collaboration of Del Rey, Grande and Cyrus on a new theme song became a big publicity beat, culminating in the mid-September release of a video for the song (115 million views on YouTube) that included an appearance by Banks. The full soundtrack song list was released in October, offering more of a look at the talent involved.

Banks received the Will Rogers Motion Picture Pioneers Foundation’s Pioneer of the Year Award in September, the first female filmmaker to get that honor. She was presented the award by the rest of the cast.

The cast sang the praises of Banks in a featurette released at the beginning of November, also emphasizing how great it was to work with a bunch of talented women and send that message to women and girls everywhere.

A promotional spot featuring soccer star Megan Rapinoe shows her instilling the same kind of lessons about teamwork and supporting the women around you that have been major themes throughout the campaign. A number of sports stars, as well as actors like Lili Reinhart and Hailee Steinfeld, were shown in a brief video of them jumping out of an airplane, just like the scene from the movie featured in the trailers.

The “elite team of women” was introduced in a brief Imax promotion that highlighted how much more of the action audiences can see if they buy tickets for that format.

Contestants on RuPaul’s Drag Race were part of a promotion that saw them enlisted by Banks’ Bosley to go on a mission.

Last week Sony hosted a Q&A with the cast at Twitter’s New York City headquarters. The stars and others came out for the movie’s world premiere earlier this week.

? JustFab, which offered a collection of fashion and apparel items broken down by the personalities and roles of the three Angels.

Fashion and lifestyle inspiration can be found on a movie-themed Pinterest profile with boards that are specific to each character. The movies and themes that inspired Banks while making the movie were shared in a video interview published by Pinterest to show off those collections.

Online and outdoor ads used elements of the key art, along with short versions of the trailers. 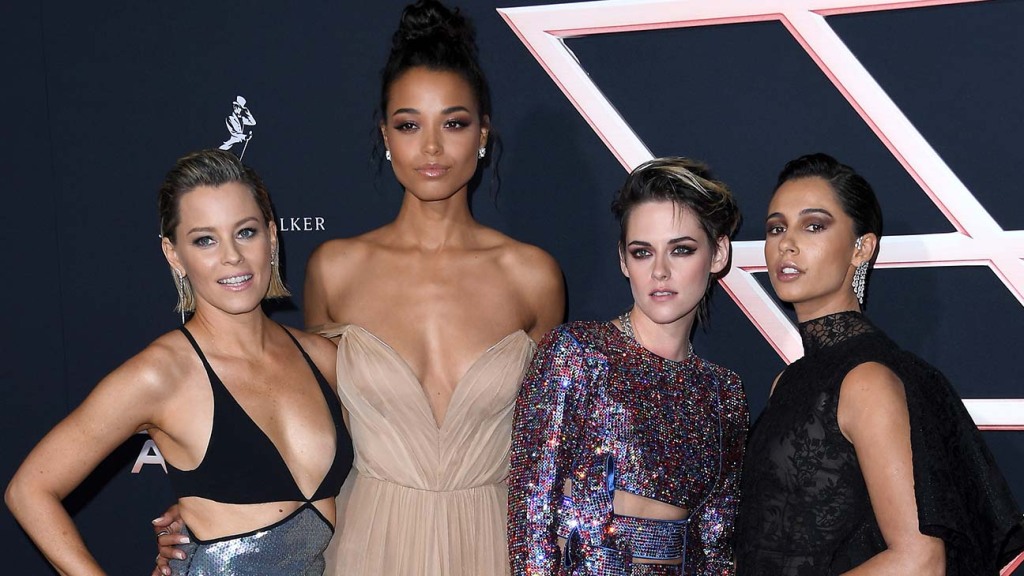 One of the core messages of Sony’s marketing is that the people women can count on when things get tough are other women. Banks has emphasized throughout the featurettes and other interviews that she wanted the story to celebrate powerful and supportive women, and that theme comes through clearly, offering an alternative to the trope of the male hero.

The theme is meant to appeal to audiences of all ages. Those who might be too young to have much connection with previous incarnations of the franchise are specifically targeted by the campaign’s consistent emphasis on the soundtrack, filled with artists that are popular right now. All the trailers, along with many other promotions, make sure to call the music out as a big selling point to get people’s attention.

Much of what’s shown in the marketing wouldn’t be out of place if it were used to sell a new James Bond, Jason Bourne or other male-starring action film. One difference here is that instead of the sometimes angst-ridden way those heroes are often portrayed, the Angels are shown getting out of difficult situations with confidence and ease, their skills absolutely up to each and every challenge.