[This story contains minor spoilers for Quibi’s The Stranger.]

Veena Sud was planning on leaving behind episodic storytelling for awhile after overseeing television shows such as AMC and Netflix’s The Killing and Netflix’s Seven Seconds. But after a meeting with Jeffrey Katzenberg, who was in the midst of getting his $1.75 billion mobile video platform Quibi off the ground, she was quickly sold on the challenge of creating content that could feel cinematic on a phone while also being digested in seven- to 10-minute chunks.

“We are on this universal response system thanks to these things in our hands,” Sud notes of our intimate relationships with our phones. “I was curious to how that would affect how we feel about and react to content.”

Sud soon had dreamed up the concept that would become The Stranger, a project centering Clare (Maika Monroe), an aspiring screenwriter from Kansas who is terrorized by her rideshare passenger Carl E. (Dane DeHaan). The story in part is drawn from items percolating in the news, including how the data we put into the world via social media could be used to help or to hurt us. Carl E. takes advantage of information about Clare to predict her life path, something that some scientists think is not outside the realm of possibilities in the future and an idea Sud was exposed to when she attended a talk at the Science & Entertainment Exchange, which connects people in the entertainment industry with scientists.

“It was an artificial intelligence conversation between two developers and one said, ‘This is all wonderful. AI will herald in a bright future of new ways of living that are great for humanity,'” recalls Sud. “The other developer was like, ‘I feel like [Robert] Oppenheimer with the bomb.”

Among the studies Sud dove into was one that looked at how one’s social media posts — and the posts of one’s friends and family — could help predict success rates in Alcoholics Anonymous, because those posts unwittingly gave insights into one’s family history and other risk factors. 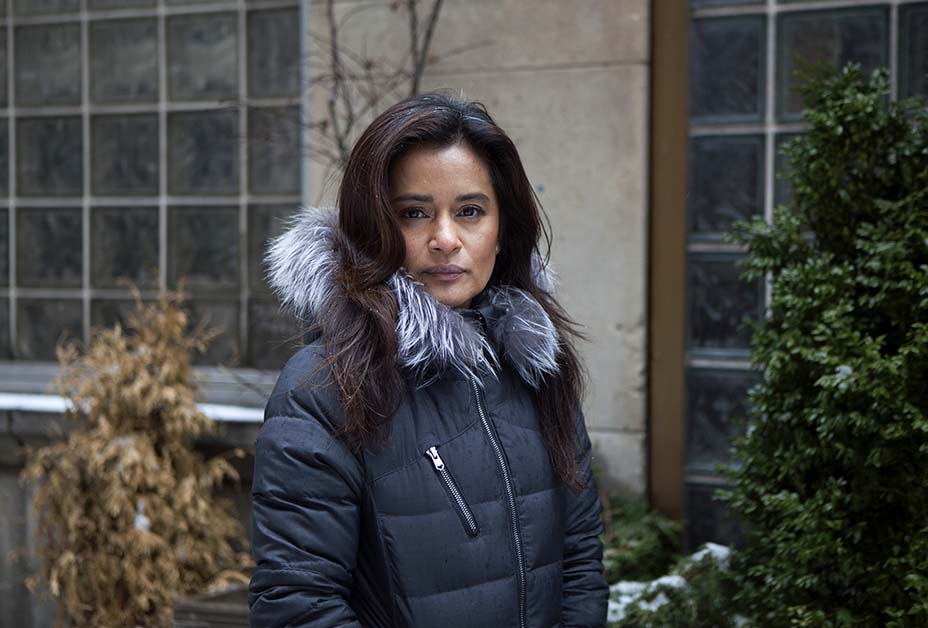 The Stranger was filmed on location over six weeks in Los Angeles, mostly at night. After cracking the story, Sud worked closely with cinematographer Paul Yee, production designer Jenny Möller and the rest of her team to rethink how to make the story work visually when it would be told on an aspect ratio fitting a phone.

“We played with infinity lines. We played with really long hallways that would look very odd, were you to be shooting something on a normal aspect ratio,” says Sud. “But we knew we needed that kind of forever depth. We even pushed aisles together closer so that you felt as you move through this world, you were getting completely new experiences over and over.”

For her villain, Carl E., Sud was partially inspired by stories of men who have self-identified as incels and committed horrible crimes.

“I also didn’t want to too directly talk about that, because I think that could be a bit of a stereotype about incels,” says Sud. “There have been some terrifying people who have self-identified as that and done terrible things, like the killer in Santa Barbara, but I think it’s way more complex. I think we live in a whole culture that has relegated a generation of humanity, male and female, to a type of interaction that sometimes is very limiting.”

It’s possible that The Stranger will find new life in a few years. Part of Quibi’s pitch to creators is that eventually rights return to them, so Sud would be free to release a feature-film version of the project. That’s something she and editor Philip Fowler discussed in the edit room.

“We don’t have a ton of secret footage. There was just not the real estate to shoot more than we were shooting, but there could be ways of rethinking some of the footage so it falls more into a classic three-arc structure,” says Sud. “It was fun to be able to think, two years from now, we get to do something else with The Stranger.”

All chapters of The Stranger are available now on Quibi.

As Jeffrey Katzenberg’s Quibi Races Toward Launch, Will a Changed World Help or Hurt?