Like a comic book hero who suffers a massive defeat before rising again, legendary artist Jim Starlin is back.

The writer and artist, known for creating characters such as Avengers: Endgame villain Thanos, and Guardians of the Galaxy characters Gamora and Drax, had an accident several years ago that made it impossible to draw for more than 15 minutes at a time.

“I blew a hole in between my thumb and my forefinger,” Starlin tells The Hollywood Reporter of wounds suffered several years ago in a compressed air explosion.  “And so I figured my time as an artist was pretty well finished.”

It was a major blow to Starlin, who became a superstar artist with Marvel in the 1970s. He continued to do exercises squeezing a ball, but mostly so he could someday button up his own shirt without assistance. Eventually, he started going to conventions again, with his agent occasionally asking him to try a few drawings. One of those was for artist Jaime Jameson, who begged for a Starlin Doctor Doom. After some hounding, he gave it a shot.

“I sat down with a pencil and to my surprise, I was able to do this drawing without my hand cramping up,” Starlin says.

Soon he and Jameson were teaming up for Dreadstar Returns, a graphic novel revival of the property Starlin first worked on in the 1980s and which centers on Vanth Dreadstar, leader of a rag-tag crew who go on galaxy-spanning missions. Starlin writes and pencils the tale, with Jameson inking. 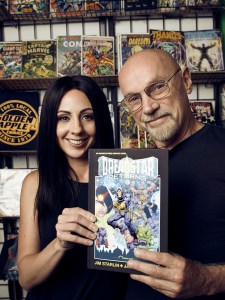 “It was 20 years between the stories, and I decided that the characters themselves had to have 20 years,” Starlin notes. “Where would they have found themselves after all this time?”

When THR spoke with Starlin in late May, the New York-based Starlin was in Los Angeles for business, not least of which was putting out feelers for adapting Dreadstar for the screen.

“I would like to see a Dreadstar TV series. I’m not looking for a movie deal,” Starlin says. “This is long-term story. He’s not a one-shot or a three-shot. It’s too complicated.”

Last year, Starlin offered an early look at Dreadstar, complete with a villain modeled after then-President Donald Trump, whom the creator took issue with for a number of reasons, including his campaign using Thanos’ likeness from Avengers: Endgame. (Starlin confirms the art did not spark a visit from the Secret Service.)

After seeing Thanos kill half the universe in Avengers: Infinity War, Starlin is looking forward to seeing another one of his creations on the screen, with Shang-Chi and the Legend of the Ten Rings arriving Sept. 3 from Marvel Studios. Though he got to pal around with Guardians of the Galaxy filmmaker James Gunn, Starlin hasn’t had the opportunity to meet the team behind Shang-Chi, partially because the film shot during the age of COVID-19.

“There is no cameo this time around,” Starlin says of the film based on the character he co-created in 1973. “I’m going to come in cold like everybody else. I can’t wait to see it.”

As for Dreadstar, Starlin and Jameson are already far into the next installment.

Says Starlin: “That next story is about accepting the inevitable, which we all have over the last year.”