The Craft: Legacy’s Lovie Simone is still in shock that her on-screen coven of witches got along as well as they did and as quickly as they did. Many months removed from filming, Simone still considers her co-stars Cailee Spaeny, Gideon Adlon and Zoey Luna to be sisters, something she credits to director Zoe Lister-Jones and the environment she created on and off set. Simone plays Tabby who represents the classical element of fire from within the coven. She can even turn her fingers into a blow torch at will.

Legacy is a continuation or “legacy sequel” to the 1996 cult classic, The Craft, which is still quoted and referenced to this day. Without a doubt, the original film’s most enduring line of dialogue has always been Nancy Downs’ (Fairuza Balk) response to an overprotective bus driver: “We are the weirdos, mister.” While Legacy’s trailer seemed to indicate that the same line would go to Cailee Spaeny’s lead character, Lily, it was Simone who did the honors in the movie itself.

'Werewolf by Night' Director Michael Giacchino Thought the Marvel Special Would be Rated TV-MA, Not TV-14

“Well, we were shooting the scenes in the final sequence where I say that line, and I guess it was just written for me,” Simone tells The Hollywood Reporter. “We did have to do extra promo shots towards the end of filming, and that happened because we looked like we were positioned or lined up in that famous The Craft way. So we just took that opportunity to let Cailee say the line because it’s Lily. (Laughs.) I never really tried to mimic it exactly. I tried to give it the same feel with the same intention, if anything, but acted differently.”

While the employment rate involving women directors and major studio films is slowly climbing, Simone has benefited from Hollywood’s changing landscape since she’s already worked with numerous women directors across film and television. That list includes the aforementioned Lister-Jones, Pippa Bianco and Regina King, who directed Simone on her OWN (Oprah Winfrey Network) series, Greenleaf.

“I’ve been extremely blessed to have gotten the opportunity to work with the amount of women directors that I have in my career,” Simone shares. “With Tayarisha Poe, Regina King and Zoe Lister-Jones, they do such a good job of talking to you in a sisterly or maternal way. It’s a conversation and you know where they’re coming from because they do have a similar upbringing as you just by default. I know a lot of directors can be strict, but Zoe’s a ‘how about this?’ director who listens.”

In a recent conversation with THR, Simone also discusses the spooky moment she experienced during Legacy’s production, the sisterly bond she has with her Craft co-stars and her dream to do a sci-fi/fantasy film.

Was The Craft: Legacy the first time you’ve ever had a chemistry read with a group of girls? 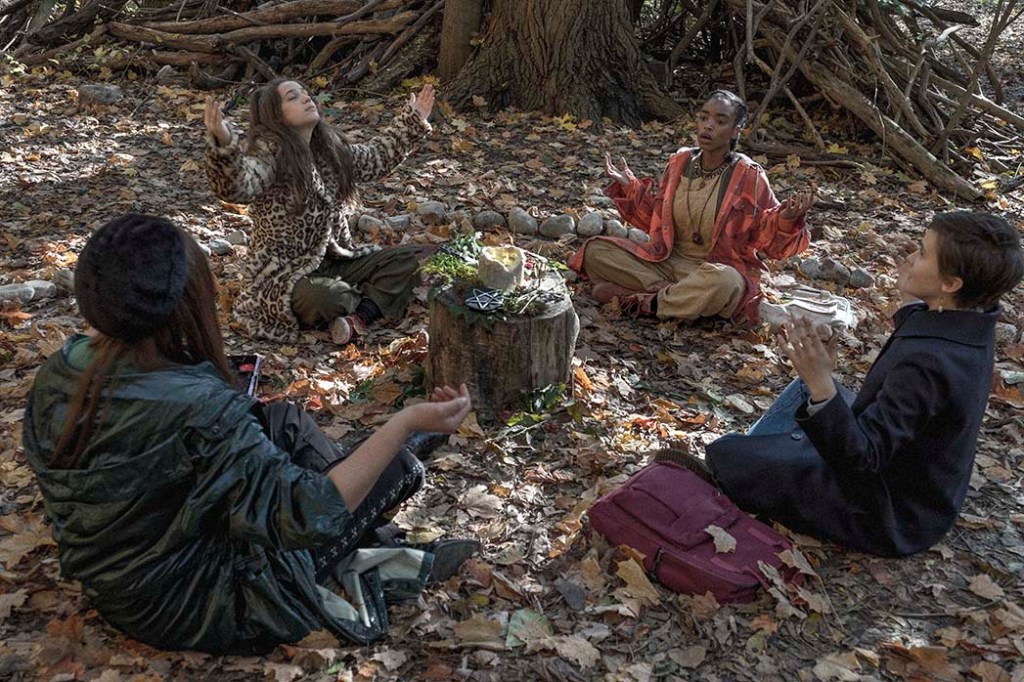 Did the four of you hang out off-set during filming in hopes of creating further chemistry on-screen?

Yes, we did begin hanging out when we all arrived in Toronto. It wasn’t just for the chemistry on-camera. It was more about meeting each other and experiencing each other while we worked together. But everything that happened after meeting was so natural. We would do full moon rituals, we would meditate together, we would do yoga and just cook together. We were literally experiencing one another just because we were working and basically living together. (Laughs.)

Had you crossed paths with any of these girls at previous auditions over the years?

No, this was my first time meeting all of them. I was really shocked as to how well we kicked it off at the chemistry read. I usually do self-tapes, so it’s kind of distant because of the digital world. 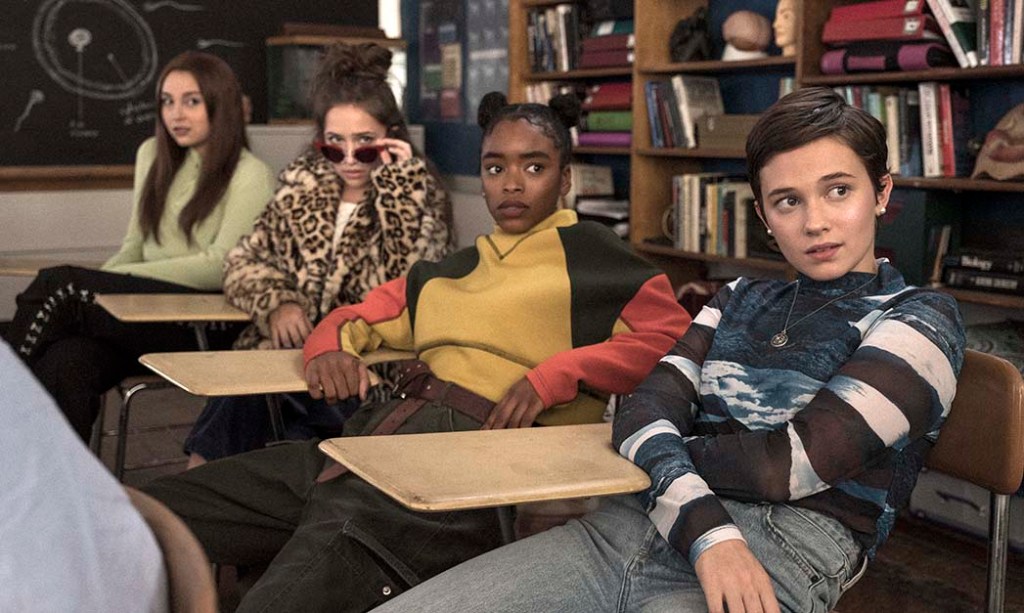 I asked Cailee Spaeny this question as well, but when it comes to the original 1996 movie, were there more advantages or disadvantages to watching it as you prepared? I’d imagine that if you’re too beholden to the first movie, then it might stifle you, creatively.

I don’t think it really matters only because Zoe Lister-Jones did such a great job at just writing a new movie, rather than focusing on the legacy of the original film. The Craft empowers teenage girls to be themselves and it shows them that it’s okay to be different. It shows them that their difference is their power and that they should step into their power. The Craft: Legacy is moreso an updated version of The Craft, so the girls today can have whatever The Craft effect was on the original Craft fans. In this Craft, there’s a lot more light shining on hypermasculinity, there’s a lot more sisterhood themes and there are more positive themes that are beneficial to today’s world, especially in the light of everything happening right now. 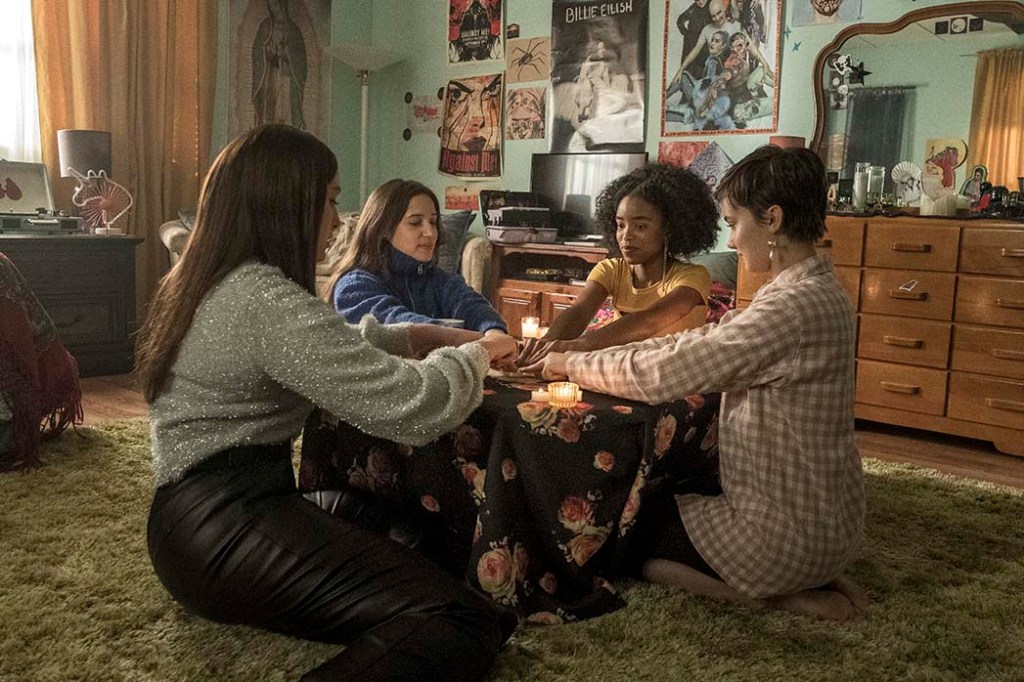 Please forgive me for such a basic question, but is there a particular spell that you wish you could cast in real life, consequence free?

(Laughs.) Yeah, I would want to be able to cast a self-love spell. If everybody had that spell cast on them, then everything would fall into alignment. There would be a little less stress in regard to certain gravities and feelings of belonging.

When Tabby’s fingers would turn into a blow torch of sorts, did the filmmakers wrap them in a green sleeve?

No, I just did the finger actions and pretended to see a flame. The rest was done by the people in CGI. So I just had to pretend there was a flame with me, only without the danger. (Laughs.)

Cailee told me about her creepy experiences on-set including an overwhelming feeling of sadness, an orb that showed up in her phone’s camera roll and a door that opened out of nowhere. Did you experience anything like that?

I only experienced one really creepy thing that I have suppressed or done my best to suppress. (Laughs.) So we filmed in this part of Canada called Hamilton, and we stayed at a different hotel than the one we stayed at for the duration of filming. When we stayed there, I remember trying to go to sleep until I heard someone say something to me, in my ear. So I freaked out and was like, “Wait, what?!” So I turned on all the lights, but no one was there. Then, I called all the girls, and I was like, “You guys, no, this isn’t going to work.” (Laughs.) It was crazy.

In the past, Sony has shot elements that were only meant for their movie trailers, and in The Craft: Legacy’s case, Cailee’s Lily says Nancy Downs’ (Fairuza Balk) famous “weirdos” line in the trailer but not in the movie. Instead, the honor of saying that line went to you and your character, Tabby. How did that transpire?

Well, we were shooting the scenes in the final sequence where I say that line, and I guess it was just written for me. We did have to do extra promo shots towards the end of filming, and that happened because we looked like we were positioned or lined up in that famous The Craft way. So we just took that opportunity to let Cailee say the line because it’s Lily. (Laughs.) But yeah, that’s how it happened.

How many different ways did you perform the line? Did you consciously avoid mimicking Nancy’s delivery?

I never really tried to mimic it exactly. I tried to give it the same feel with the same intention, if anything, but acted differently.

How many takes did you do?

Was the very last scene in your script? Or did those pages only go to the people who were in that concluding scene?

Wow, I wasn’t expecting to hear that. Precautions are often taken in significant scenes like that.

(Laughs.) Yeah, everybody got the script.

Since the number of women who get to direct major studio films is still embarrassingly low, I want to highlight Zoe once again. Was it helpful to have a woman’s perspective on a story about four young women?

Yes, I’ve been extremely blessed to have gotten the opportunity to work with the amount of women directors that I have in my career. I’m also getting used to their style of directing. With Tayarisha Poe, Regina King and Zoe Lister-Jones, they do such a good job of talking to you in a sisterly or maternal way. It’s a conversation and you know where they’re coming from because they do have a similar upbringing as you just by default. Zoe’s good at putting you in the headspace before the scene and allowing you to cooperate with your character. I know a lot of directors can be strict, but Zoe’s a “how about this?” director who listens. So I feel like I’ve been blessed. I feel like we’ve been working together on a project rather than a movie… It just felt really natural and authentic as it came together. All the pieces were put together slowly but surely.

You worked with the male lead, Nicholas Galitzine, on Pippa Bianco’s Share. I harp on this a lot in my interviews, but Hollywood is such a small world as reunions like this happen all the time. Is it always nice to have at least one familiar face on set?

Yeah, it is nice. It’s definitely comforting. When we filmed Share, me, Nick and Charlie Plummer would explore Toronto and just talk, or hang out in our hotel rooms. When you have those very pleasant memories along with the person, it’s like, “Okay, I know I’m going to be comfortable and I know I have that source of comfort, if anything.” But I love that it was just an additional comfort next to having the girls who still feel like my sisters. Nick was like our brother — our silly brother. (Laughs.) So it was really nice because I love seeing people again. I love getting to catch up because you’re never the same person that you were, and I’ll see that they’re not the same person I left them at. So there was a lot of growing to do and a lot of life to be had in between.

If you could walk into any studio right now and green light a particular role or genre for yourself, what would it be?

That’s a good question. I guess it would change by the day because I am really open to everything. I just love the human mind, which is why I act. But as of right now, at 2:15 pm, I would say sci-fi/fantasy. I would like to be in something where I would have to really transform, like an Avatar movie. Yeah, an Avatar film with blue people. (Laughs.)

***
The Craft: Legacy is now available on demand and digital.