Indie producer Jeffrey Sharp, whose credits include You Can Count on Me (2000), was preparing to celebrate his one-year anniversary as executive director of the Independent Film Project when the coronavirus struck. IFP is host of the Gotham Awards, the first major awards show of the season and an Oscar bellwether — Moonlight, Spotlight and The Hurt Locker are among the handful of films named best feature by both IFP and the Academy Awards. In a first, the five features nominated by the Gothams jury this year all were directed by women: Kelly Reichardt’s First Cow, Kitty Green’s The Assistant, Eliza Hittman’s Never Rarely Sometimes Always, Chloé Zhao’s Nomadland and Natalie Erika James’ Relic. Its awards ceremony, traditionally staged at Cipriani Wall Street, has become so recognized that IFP is rebranding itself as the Gotham Film and Media Institute and informally, The Gotham.

Events of the Week: 'Nightmare Alley,' 'West Side Story' and More

This year’s 30th anniversary event — pushed back a month to Jan. 11 because of the COVID-19 crisis — will be almost entirely virtual, but Sharp still promises innovation and fun, along with a new award, an ensemble cast tribute. (He succeeded Joana Vicente, who now heads the Toronto Film Festival.) In a recent interview, he addressed the challenges posed by the pandemic and some of his favorite moments through the years as a civilian on the indie scene. 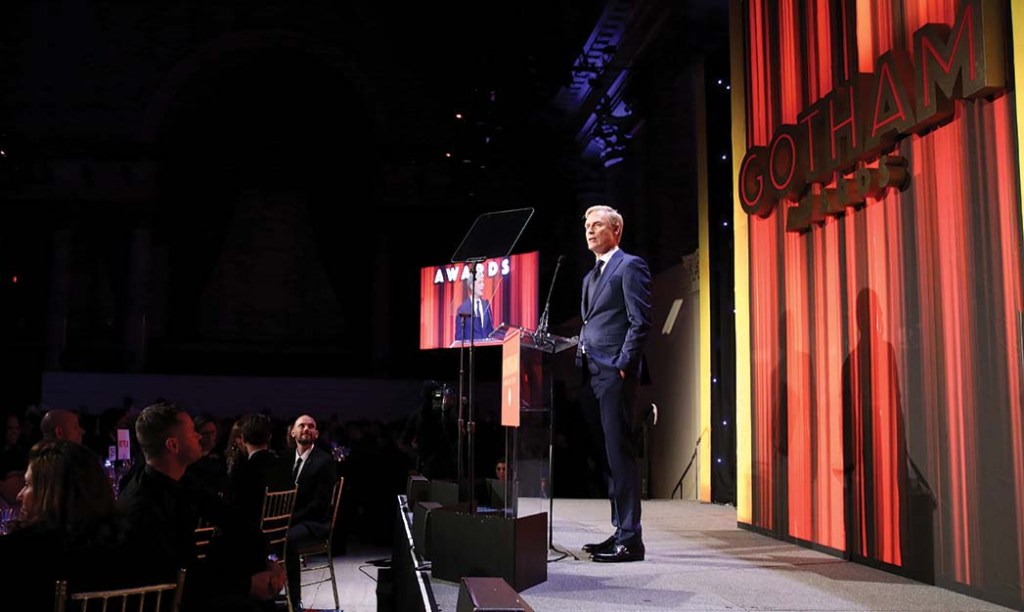 Can you talk about the specifics of the upcoming awards show?

We pushed the ceremony to Jan. 11 to make sure we retained that pole position in terms of awards season. The Gothams are also a unique show in that we sell tables to our partners and supporters. As a result, we had to reconceive the show yet still retain this sense of coming together as a group. The tables will be interacting in their own little Zoom-land, or something similar to Zoom, and will be watching the show together. It is a first in terms of virtual tables that interact with a live show. We are using a gaming platform that was designed for online poker. (Laughs.)

Will you have live presenters?

Can you explain the rebranding of IFP?

It was made clear to me when I took the job that this conversation had been ongoing for many years. IFP had outgrown its name in a major way. The Gothams brand has become one of our greatest assets. All our year-round activities will live under one umbrella.

How did the Gotham Awards become such a notable event?

In the beginning, it was very New York-centric and celebrated local indie leaders. And a few years later, we ran out of people to celebrate, so it became about excellence. About 17 years ago, we started handing out competitive awards, and that’s really when the show grew up. Categories were added, such as this year. We’ve added a best ensemble tribute award. But there is definitely room for improvement in terms of recognizing diversity and including a wide range of voices on the tribute side.

How many times have you gone to the Gothams?

We won an award for You Can Count on Me. That’s the first time I remember going. It’s a rite of passage. It is during the holiday period, so a lot of people turn out. People let their hair down. It is a chance for members of our indie community who have gone on to bigger studio projects, like Frances McDormand, to reconnect with that vital community that gave birth to their careers. Barry Jenkins’ Moonlight won on its way to Oscar glory. It was a moment you’ll never forget.