When Chris Hemsworth’s God of Thunder returned to theaters Nov. 3 in Thor: Ragnarok, the colorful new planet Sakaar may have felt strangely familiar to fans of comic books. “Sakaar is retro and strongly influenced by the comic book art that Jack Kirby did in the ‘60s, ‘70s and ‘80s,” says production designer Dan Hennah, a five-time Academy Award nominee who claimed an Oscar for The Lord of the Rings: The Return of the King. Kirby, who died in 1994, didn’t actually dream up Sakaar himself — the planet wasn’t conceived until 2006 for the Planet Hulk comic book arc — but his visual imagination definitely influenced its look.

“The original concept of Sakaar was that it was a place that collected space debris and basically nothing grows there. The debris is repurposed to create buildings,” explains Hennah, who designed the $180 million Marvel production along with Ra Vincent. This “whimsical” and “psychedelic” look is evident from the Sakaarian streets (the sets were built at Australia’s Village Roadshow Studios) to the Grandmaster’s multistoried palace.

Played by Jeff Goldblum, the Grandmaster enjoys holding gladiator-like events in his enormous arena, another key location. “We settled on this very tall structure with a sort of vertigo-inducing feel in the nosebleed seats,” says Hennah. “Early on we looked at ancient Roman arenas, but needed to go to a world that was purely Sakaar — and get 400,000 people in the stadium.” In the end, production design worked hand in hand with the visual effects team, led by VFX supervisor Jake Morrison, to create the arena as a CG environment.

Among the sets, a favorite of Hennah’s is Hulk’s suite, which is primarily red and white, contrasting with Hulk’s signature green appearance. Adds Hennah, “We went with the idea that everything is Hulk-sized.” 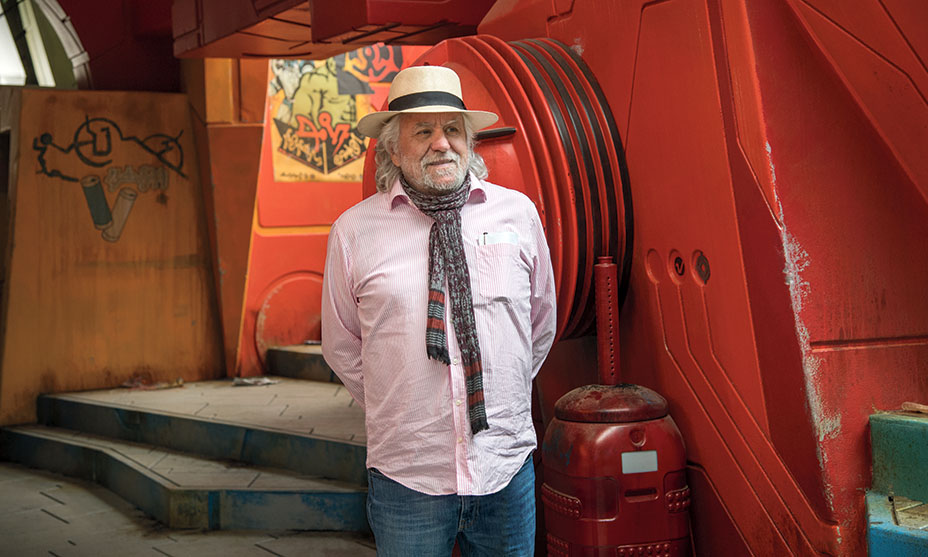