The Australian-born star — who is just an Oscar away from an EGOT — has conquered TV, film and theater. And though he’s performed in arenas down under, Jackman has yet to do so across the globe. But that’s about to change.

The musically inclined actor announced last month that he is launching a world tour in 2019. His concert series — what he describes as an “eclectic musical spectacle,” titled The Man. The Music. The Show. — kicks off in May and will span Europe and the U.S. with dates set for iconic venues such as London’s O2 Arena and New York’s Madison Square Garden.

Asked about going out on the road next year, Jackman beams with excitement. “This, for me, is going to happen over a summer. I get to take my family with me,” he tells The Hollywood Reporter. “I pinch myself I get to do this. This is really a bucket-list moment.”

According to Jackman, the tour is essentially an extension of his one-man show, Hugh Jackman, Back on Broadway, which was a smash on the Great White Way in 2011 and was then revamped for an Australian arena tour in 2015. Three years later, Jackman is breathing new life into the show yet again with the addition of songs from Les Misérables — he played Jean Valjean in 2012’s film adaptation — and his beloved big-screen hit, 2017’s The Greatest Showman, which grossed $435 million internationally.

“I love doing my show because I get to explore things and continue to push myself. But the arena story of it all was the biggest surprise to me,” he says. “My mate Paul Dainty, who is a promoter in Australia, told me, ‘Dude, you should come down and do arenas.’ Even though I had done arenas in Australia for the 2006 tour of The Boy From Oz, I wasn’t sure I could do arenas on my own. But Paul told me to trust him, and then we pulled it off. I was shocked.”

It wasn’t long before Jackman got the bug to try out arenas on the other side of the Pacific. “I told my L.A. agent, ‘I’d love to do this in America and Europe.’ But he wasn’t convinced,” Jackman recounts. “But after The Greatest Showman, he rang me and asked, ‘You still interested? I think you’ve got a shot.'” 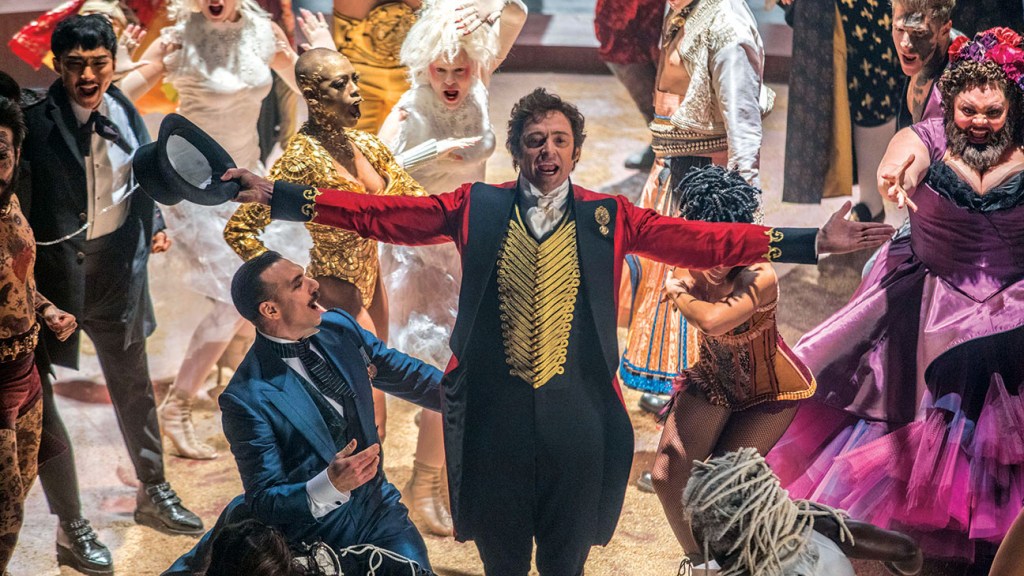 Jackman — who tells THR he recently attended a Greatest Showman-themed spinning class — understands the power of the soundtrack, full of anthems like “This Is Me” and “The Greatest Show,” which have struck an inspirational chord with fans worldwide. “People love the movie, and they absolutely love the music,” he says with a smile. “And I believe they’ll be even more excited when they see these amazing songs performed live.”

Below, Jackman opens up some more to THR about the evolution of his show, his wish list for guest appearances — Pink! Kelly Clarkson! James Corden! — and his plan to “try and dance like I’m 25.”

What made you want to embark on an arena tour rather than return to Broadway?

I just love it. What initially made me most nervous about doing arenas was that, for me, it’s all about the connection with the audience. I want intimacy. I wasn’t sure if that was achievable in an arena. But when I did the arena tour of The Boy From Oz in 2006, I could feel the people. That’s when I realized that this works. I look at all the great live performers I love — Keith Urban, Justin Timberlake, Michael Jackson, Beyonce, Richard Marx — and these people make you feel like you were there the night when…. Something’s happening that night. I want to make people feel like that, too.

How is your experience with The Boy From Oz serving as a blueprint for this tour?

It set me up, because there was a lot of ad-libbing. There was a lot of going out into the audience. There was a lot of being free. Yes, there was spectacle, but that was a theatrical show. There is theater to my show. I tell stories, I perform songs that are quite intimate at times. I’ll do some musical theater songs that people may not be used to hearing in arenas. I’ll do stuff from The Greatest Showman, I’ll do stuff from Les Miz. It’s going to be eclectic. I think The Boy From Oz was really the first time I thought, “OK, these arenas can work as a theatrical space.” Because, yes, I’m in an arena — but, really, it’s just theater.

How has your show evolved since its first iteration in 2011 on Broadway?

There will be a few elements of that show that will stay — the best parts! Or not just the best parts, but the parts that I still feel are me. The show is very self-indulgent. It’s all about me, but really I’m trying to show a side of myself to people that they may not know about. I want to be as authentic as I can in the material I choose. Obviously, there will be numbers from The Greatest Showman that were not in there. I had not done Les Miz when I did that show. I’m kind of obsessed with Dear Evan Hansen at the moment, so I want to do some stuff from that. I’m also really excited to dance! I dance every day. So, since 2011, I’m making up for all the dancing I didn’t do as a kid. I really want to take my dancing to a new level.

Both Les Misérables and The Greatest Showman have passionate fan bases. What excites you most about incorporating music from those films into your show?

I love the music. I love the acting challenge of both. And, obviously, Les Miz works theatrically. The Greatest Showman does as well. There was a point where Stacy Snyder, the head of Fox — who also did Wicked — said, “Maybe we should go to Broadway first and then do the film.” Even in its early phases, it worked as a stage show. Seeing Keala Settle sing “This Is Me” for the first time ever, she had just gotten the music the day before, and that video has been watched 30 million times online. It just works!

It seems like people almost have a spiritual connection to the Greatest Showman soundtrack. Does that add pressure to performing these songs live?

It makes it more exciting, because people bring that energy. As a performer, you have to open yourself up to that, what the song is about. I’m not going to be singing “This Is Me,” but Keala Settle is going to do a whole bunch of the shows. For the fans to hear her sing that song live, I’m so thrilled. When it comes to singing songs from The Greatest Showman, it’s about being authentic and turning up and being yourself and being proud of that.

I love the message of the film. Whatever your crazy dream is, just say, “Screw it. This is my dream. And I don’t care what you think. I’m going to go for it!” This show is a crazy dream to me. And now it’s real. So I’m just going to turn up and celebrate with everyone.

Rehearsals have already begun. What are you enjoying most about the process this time around?

I love rehearsals. It’s just my favorite thing. By the time you get to perform, there’s no safety net. But being in rehearsals, you can make a complete ass of yourself and just go for it. And it’s all open. Any idea counts. I’ve also written a list of guests who I want. There’s literally 50 or 60 people who I want to reach out to.

Who’s at the top?

I would love Pink to come and do “A Million Dreams” with me. She sang it for The Greatest Showman‘s Reimagined soundtrack. We’re actually going to be on tour at the same time in Europe, so I’d love for her to come and sing a little harmony for “A Million Dreams” with me. I’d even love to have her daughter, Willow, who sang the reprise on that album, come sing it with me. I’d also love to have Kelly Clarkson and Taron Egerton, who plays Elton John in Rocketman. He has a voice like you cannot believe. The original cast of Oklahoma!, I’d love to reunite with for the show’s 21st anniversary. James Corden, I’ve asked him if he’ll come on. He’d be so much fun! I would love to have them all come, and loads of other people.

When it comes to showmanship, which entertainer inspires you the most?

My show is really inspired by Sting. Again, I’d love for him to come on and perform.

Is there a particular number you’re most looking forward to performing?

There’s at least 10 or 12 of those. I do love “The Greatest Show.” It’s got to be one of the greatest openings to any show. I sang it bright and early [last week] on the Today show at 8 o’clock in the morning, and I’ve never done that before. I’ve never sung that early. That song is like being shot out of a cannon. There’s something sort of religious about it. There’s also a couple of dance numbers where I’m pushing myself to do things I’ve never done before. Maybe this is my midlife crisis! (Laughs) I’ve turned 50, and now I’m going to try and dance like I’m 25.

How do you plan to maintain your stamina on tour?

Sleep! I’m not sure if you’ve heard the LeBron James and Tim Ferriss podcast that came out a bit ago, but Tim Ferriss says to LeBron, “After all these years, what’s your No. 1 tip to anybody?” And he says, “Sleep, sleep, sleep.” So, I’m going to get my rest like LeBron. But after you’ve done Broadway, nothing is as tiring. Eight shows a week is a serious commitment, and you live like a monk. I’m going to really try and embrace everywhere we go with this tour. I cannot wait.