Continue to The Hollywood Reporter SKIP AD
You will be redirected back to your article in seconds
Skip to main content
August 21, 2019 6:00am

When Universal called off the Sept. 27 release of The Hunt amid criticism (including from President Trump) of its violence and polarizing political themes — both under heightened scrutiny amid a wave of U.S. mass shootings in early August — the move brought fresh attention to an age-old debate about the impact of entertainment on culture. The argument that movies are the root of social ills has been around as long as motion pictures themselves, and President Trump has recently refocused this age-old polemic to attack video games. But the central problem with blaming popular culture for any alarming trend is that this tactic has a long history of misdirected outrage.

Sometimes films get delayed because their release lands uncomfortably close to similar events playing out in real life. For example, 2013’s Gangster Squad was delayed and subject to reshoots after the 2012 Aurora shootings in Colorado. Other films find themselves subject to political pressure, such as ABC’s The Path to 9/11, which attracted pressure from the Clintons and their allies — the miniseries was almost canceled and is still unavailable on DVD. Universal’s recent cancellation of The Hunt represents both factors — sensitivity to tragic events and political intimidation.

Films like the Jason Blum-produced The Hunt — about elitists hunting other humans for sport — date back to 1932’s The Most Dangerous Game. Dozens of such films have spawned myriad angles on this warped version of hunting, not least the recent Purge films (also produced by Blum). The response to The Hunt, complete with threats of violence against the filmmakers and producers, mirrors the death threats hurled at The Path to 9/11 filmmakers.

Universal’s decision to shelve the project came after President Trump tweeted that The Hunt was “made to inflame and cause chaos.” The Hunt director Craig Zobel has spoken out, telling Variety that “our ambition was to poke at both sides of the aisle equally. We seek to entertain and unify, not enrage and divide. It is up to the viewers to decide what their takeaway will be.”

We live in a culture where both pundits and audiences make determinations about movies long before they are released. Planning the rollout for a film with any edgy political material is swimming in shark-infested waters. Both the political left and right have waged battles against specific productions, which says less about any manipulative quality of the medium and more about Washington’s fear of popular culture. 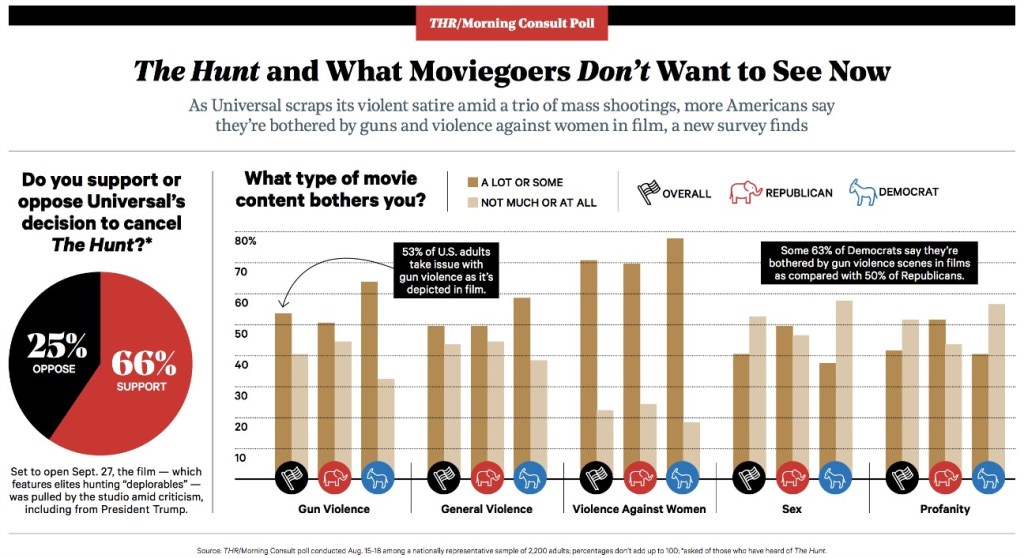 Hollywood has historically defended creators’ work against detractors. Studio moguls during the Golden Age were no strangers to threats of violence. In fact, a plan to gun down many prominent Hollywood Jews was foiled in the 1930s and the studios continued with business as usual. For all of Hollywood’s high-profile stains for folding to fear-mongering during the Blacklist era, the industry also has a long legacy of successfully defending itself against political pressure.

Movies battled national pushback and freedom of speech issues as early as 1915. Hollywood hired Will Hays in 1922 to serve as a commissioner to the movies after a series of scandals put the industry under the microscope. The Motion Picture Producers and Distributors Association oversaw the release of each film and assured the public of their respectable quality. This worked until the Payne Fund studies (1929-1932) popularized the myth that violent and sexualized films would turn young moviegoers into delinquents. The fear spread when Henry James Forman’s Our Movie Made Children, a best-selling monograph summarizing the Payne study, was published in 1933.

Forman described movies as “the most powerful influence now known.” He also explained how the Payne Studies put a great deal of emphasis on imitation, spreading uncorroborated fear that children would mimic the characters they saw onscreen. A year later the industry would have a revamped production code. While it may appear that the studios caved to outside pressure, the move satisfied the special interest groups like the Legion of Decency while keeping federal censorship at bay. Studio brass regularly went to bat for their filmmakers, defending edgy content.

Hollywood came under deep political scrutiny in 1941 after studios began to make anti-Nazi films like Confessions of a Nazi Spy, The Mortal Storm and The Great Dictator. Isolationist pressure was rising while the America First movement, counting among its leaders aviator Charles Lindbergh and Sen. Gerald Nye of North Dakota, was spouting anti-Hollywood and anti-Semitic rhetoric. The result was a government investigation into motion picture propaganda mere months prior to the attack on Pearl Harbor. Nye famously declared that movies have “ceased to be an instrument of entertainment” and “have become the most gigantic engines of propaganda in existence to rouse the war fever in America.” Studio moguls were subpoenaed, defended their films, and embarrassed the politicians who projected their fears onto Hollywood.

Concerns over juvenile delinquency came about again in the 1950s through Estes Kefauver, a Tennessee congressman who also took aim at comic books and nearly destroyed that industry in 1954. A year later the crosshairs were on Hollywood’s youth films like Blackboard Jungle and the upcoming Rebel Without a Cause. When Jack Warner testified for Kefauver’s inquiry on juvenile delinquency, he was pressed about the level of youth smoking and drinking in his studio’s films. Warner shot back, “You must be living in a backwards country, boy, because everybody is smoking and drinking in some form nowadays.” The mogul sympathized with the committee’s concern about youth, but had no time for baseless alarms over film content.

Music was blamed for cultural fears in the 1920s, 1950s and 1980s. Comic books saw their formal investigation in the 1950s but drew criticism again in the 1980s with the rise of adult graphic novels. By the 1990s, violent video games were the popular stooge for school shootings and other ills. In each instance, critics blamed popular culture for social issues that have much deeper roots, such as poverty and educational disparity. Movies often mirror the current world, so how does a satirical thriller like The Hunt not fit the bill for today’s polarized audiences?

Chris Yogerst is assistant professor of communication at the University of Wisconsin-Milwaukee. His book on the 1941 U.S. Senate Investigation into Motion Picture Propaganda is forthcoming from the University Press of Mississippi.