India Adams, the Hollywood “secret singer” who performed in MGM musicals for Cyd Charisse in The Band Wagon and for Joan Crawford in Torch Song, has died. She was 93.

Adams died Saturday at Providence Cedars-Sinai Tarzana Medical Center in Los Angeles after a short illness, a family spokesman announced. She was still performing as recently as last year.

In the classic The Band Wagon (1953), it was really Adams, not Charisse as ballerina Gabrielle Gerard, who is heard singing “New Sun in the Sky” and “That’s Entertainment,” the latter performed with Fred Astaire, Oscar Levant, Jack Buchanan and Nanette Fabray.

“Dorothy Kilgallen had in her column, ‘The biggest news around Radio City Music Hall is who is singing for Cyd Charisse in The Band Wagon?'” Adams recalled in a 2011 interview with the Los Angeles Times. “I wanted to phone her and say, ‘I did it.’ But I was afraid. So I didn’t.” (She had signed a gag order as part of her contract.)

In Torch Song, also released in 1953, Crawford’s character, Broadway star Jenny Stewart, is supposed to be singing along to a recording of “Tenderly” that she had made years earlier. Actually, it’s Adams’ voice on the recording. She dubs for Crawford on “You Won’t Forget Me” as well.

Adams also sings “Two-Faced Woman” for Crawford, but the track is actually an outtake from Charisse filming the song to Adams’ voice in The Band Wagon. In the 1994 documentary That’s Entertainment III, a split-screen sequence shows Charisse and Crawford lip-syncing to the same Adams track. 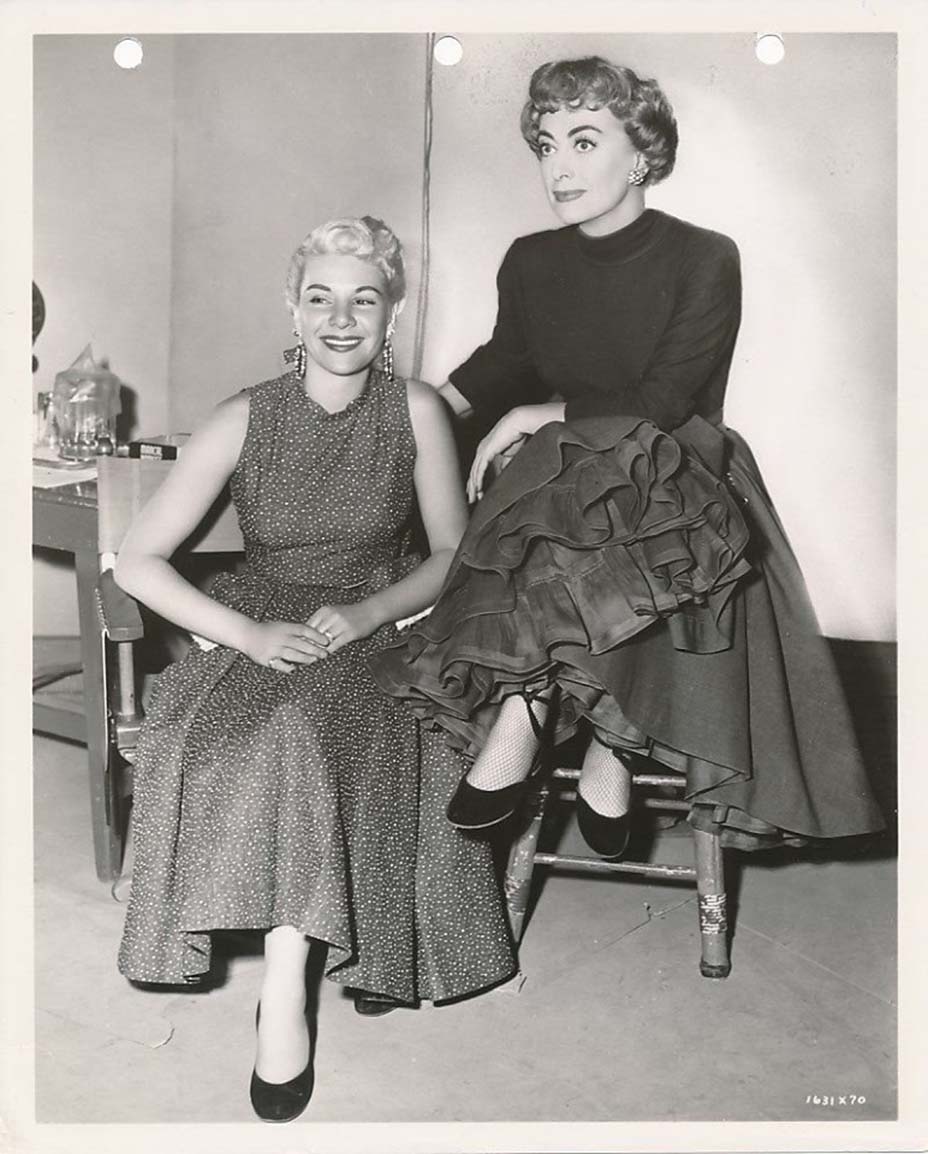 She began her professional singing career while in high school in Los Angeles.

“I had a friend in school who had a little three-piece band, and he said if I went out with him one night, he would let me sing,” she said. “I sang and the boss offered me a job, but he could only afford to have me for two nights. I said if I didn’t charge him for the other two nights, could I work there? [He agreed.] Then I just started working clubs in town.”

She was heard by an MGM scout, and soon she was recording an album of songs with pianist Walter Gross and dubbing the musicals at the studio.

In the mid-1950s, Adams lived in New York, where she starred in such musicals as Can-Can, The Most Happy Fella and Brigadoon and was a featured singer at the Latin Quarter and Radio City Music Hall. RCA Victor issued her first solo album, Comfort Me With Apples, in 1959.

Adams moved to London in the ’70s, performed often on BBC Radio and counted among her numerous television appearances a Royal Command Performance. She also served as standby for Ginger Rogers in a yearlong London production of Mame.

The foursome sang at the Academy’s Scientific and Technical Awards presentation in 1992 and played the Cinegrill in L.A., the Castro Theatre in San Francisco, the Annenberg Theatre in Palm Springs, the Alex Theatre in Glendale and the Lehman Center for the Performing Arts in New York.

At the 2011 TCM Classic Film Festival in Hollywood, Adams and Marni Nixon appeared for a panel discussion, “Voice Doubles: They Sang the Songs That Made Movies Famous,” and she, Nixon and Rita Moreno were profiled in the 2013 BBC documentary Secret Voices of Hollywood.

“The big difference between me and my group [of ghost singers] and Marni was that she was much later and it was not quite the deep, dark secret that it was when I did it,” Adams said. “When we did it, you had to swear on a Bible you weren’t going to tell anybody.”

She recently filmed a guest role on the TV series The Roommates, starring Barry Bostwick and Bruce Davison.

Adams was married to advertising executive Jack Stanley from 1951 until their 1970 divorce and to English interior designer Quentin Rance from 1974 until his death in 2016.

Survivors include her sons, Brian and Zane; daughter-in-law Lizza; grandchildren Jasmin and Hugo; and stepson Steve and his son, Dean.