It’s July, and thousands of people are escaping the heat in an air-conditioned geek refuge. In the very back left corner of the San Diego Convention Center, there is a common refrain that can be heard over the general din of the 50th annual Comic-Con: “I’ll take one of each.”

The request is coming from the conventiongoers at the Funko booth. The toy brand is best known for its Pop figurines — large-headed, small-bodied caricatures with wide-set black voids for eyes, minuscule noses and nonexistent mouths. A case study in unnatural proportions, the Pop design is instantly recognizable and inexplicably adorable.

To ensure that order is maintained and that cashiers (the majority of whom are just Funko fans that volunteer year after year at the booth) do not get mobbed, a lottery system has been put in place. Ahead of Comic-Con, fans entered a raffle online in the hopes of earning a ticket to one of four daily sessions, at which point they report to the booth at their allotted time and can enter to purchase the figures of their choosing. A tired-looking security guard explains the system to inquiring passersby, at a pace of about two every five minutes.

Each Pop figure sells for $15. At this year’s convention, 80 different Pops are being sold, ranging from the lead character in SyFy series Wynonna Earp to Louie-Bloo Raspberry, one of the mascots for Otter Pops popsicles. Each shopper can only purchase one each of every Pop. So when a conventiongoer walks up to the booth, saying, “I’ll take one of each,” they will be paying $1,200. And they do so, happily.

By the cashiers’ reckoning, the most popular Pop at this year’s Comic-Con is the red Sith Trooper — a new character from Lucasfilm that could be seen for a few brief seconds in the trailer for Star Wars: The Rise of Skywalker. The specific Pop will be available en masse when it is released in stores closer to the movie’s December release date, but Comic-Con would be one of the first times that fans could get their hands on it. By the time the second session rolls around, all of the day’s Sith Trooper allotment had sold out.

Based in Everett, Washington, Funko started in the late ’90s as a low-tech collectibles company, focused on products like vinyl figurines, hand puppets and their biggest draw, bobbleheads. Brian Mariotti, a self-proclaimed lifelong Pez collector, first found the company as a consumer, drawn to their nostalgia-focused vinyl figurines of Speed Racer, Evel Knievel and Gumby. Mariotti — whose background was in hospitality, designing and building nightclubs and bars in the Seattle area — befriended Funko founder Mike Brecker, who after almost a decade was looking to close down his then-small operation. So, in 2005, with two other investors, Mariotti bought Funko and began reading up on licensing and “then just started trying idea after idea,” he tells The Hollywood Reporter, adding, “most of which were like ‘meh.’”

There is only so much innovation to be done in the world of nostalgia collectibles. But Funko’s in-house design team set off to try to manufacture something different, taking cues from online fan culture that was churning out impressive handmade caricatures that were inspired by the chibi style from Japanese anime and manga. What they landed on was the initial iteration of the Pops.

Warner Bros. was the first major entertainment company to approach Funko. It already had global licensing contract with Mattel, so Funko would have very limited parameters under which to design a Warner Bros. consumer product. Funko showed them Pop, and, recalls Mariotti, “They got us the Batman license.”

It was at Comic-Con in 2010 that Funko debuted its first Pop collectibles of the DC superheroes. The hardcore collectors were not impressed. “Our fan base hated it, everyone who had collected Funko products hated it,” says Mariotti of their usual bobblehead-loving buyers, the vast majority of which were men. But the debut wasn’t a total flop. “I remember just girls after girls coming into the booth,” says the CEO. “We never had anything like it.”

Benjamin Butcher, Funko’s vp creative, was working as the director of consumer products at Pixar Animation when he first came across the Pop figurines. “[They] were using components that have been around for a while. The 50-50 body-to-head ratio, simple black eyes — it’s anime and it’s animation. It goes back to the core of what cartooning is,” he explains of the figures’ appeal.

After that 2010 Comic-Con and a positive launch at the 2011 American International Toy Fair, Mariotti recalls thinking, “I’m going to get every damn license I can, [and] make this the format for collecting.”

Now, with 1,100 licenses for films, TV shows, individual characters and real-life people, Funko offers Pops from Severus Snape and Ursula to George R.R. Martin and George Washington. For Funko, tiny variations of the same character can lead to big successes (there are upwards of one dozen Pop version of Luke Skywalker) and there is no such thing as too niche (there are Pops of the Big Bang Theory characters dressed as DC superheroes that are callbacks to a single episode in season four).

Brands like Star Wars, superheroes, Fortnite and Stranger Things fit squarely within the Funko wheelhouse, in that they already have a rabid fan base. But Funko also noticed a market for collectibles for underserved fandoms.

Funko likes to find itself ahead of the curve, searching fan forums for what consumers are going to be wanting. While at Comic-Con, the Funko team was already pursuing licenses for Netflix series The Witcher, which received an overwhelmingly positive response in Hall H. Its average turnaround on new Pop figures is 120 days, but it can be done in a pinch in 90 if a series, movie or person it didn’t have on their radar really, well, pops.

Funko Pops are not quite toys, but not high-end collectible action figures either. Their target shoppers skew far older (between 18 and 35) than those of Hasbro and Mattel. Moreover, those toy brands generate their own intellectual property, like Mr. Potato Head, G.I. Joe and Barbie, whereas Funko is not in the business of creating pop culture, but honoring it. In an ever-expanding entertainment landscape, Funko feeds massive amounts of existing IP through a uniform lens.

“Somehow, someway, Blanche from Golden Girls can live in the same world as Boba Fett and as George Costanza and as Ariel,” says Mariotti. “You can have all these unique things and put them on a shelf and somehow, they all work together.”

In a ballroom at the Manchester Grand Hyatt in San Diego, Funko is holding its annual Fundays event, a fan celebration of all thing Funko. It is packed with approximately 1,000 Funko loyalists (Funatics, for the uninitiated) who paid $150, as well as consumer products teams from the likes of Netflix and representatives from retailers. This year’s theme is Freaky Tiki Fundays, so Funatics and execs munch on teriyaki chicken skewers and pulled-pork sliders while a ukulele-playing musical duo croons in the background.

Upon entrance, Funatics get a “box of fun” — a surprise pack of three Funko figurines made specifically for the 2019 Fundays, as well as an ungodly large tote bag. The ballroom has a giant tiki head at one end, with a catwalk protruding from its mouth that leads to a center stage. On the surrounding tables are leis and inflatable noisemakers, as well as five-step detailed directions about “prize distribution.”

The choreographed show includes several acts — from Polysneisan dancers to vocalists. Toward the beginning of the evening, Mark Hamill makes an appearance and the noise emitted from the crowd’s noisemakers is both awe- and fear-inspiring. The Star Wars actor is there to unveil a Pop of himself, not as Luke Skywalker, but as goateed and T-shirt-wearing Mark Hamill, the actor.

While Funko still sells T-shirts, plush toys and Pez dispensers, among other novelties, 84 percent of the company’s sales comes from vinyl figurines. And, at Fundays, Pops are certainly king. Random Pop giveaways happen throughout the night (hence the massive tote bag). Eighty attendees received the first of the Hamill Pops, which will be available for purchase later this year, while 80 even luckier Funatics were bequeathed gold-painted Last Jedi Skywalker Pops. While there is audible disappointment among the Funatics that were not lucky enough to be granted exclusive Pops, everyone continues to follow the prize distribution protocol, respectfully.

As of time of publication, those limited edition golden Skywalker Pops were available on eBay in active bidding situations that ranged from $1,400 to $2,000.

After over a decade of being privately owned, Funko was acquired by private equity group Acon Investments in November 2015. Two years later, in November 2017, the company went public. With its initial public offering, Funko shares dropped more than 40 percent on their first day of trading. The company priced the shares at $12, and ended the day with a $7 stock price.

By summer 2018, the stock had rebounded and began to exceed its IPO pricing. Infinity War, Black Panther and Solo: A Star Wars Story, among other tentpoles, had helped the bottom line; a boom time for pop culture means a better quarter for Funko.

Funko’s Aug. 8 earnings report shows that net sales increased 38 percent year-over-year to $191.2 million in the second quarter of 2019. Boosted by the release of Endgame, Avengers-branded collectibles accounted for 6 percent of sales during the quarter. In 2018, Funko reported net sales of $686.1 million, up from 2017’s $516 million. The company is projecting sales between $840 million and $850 million for the whole of 2019. 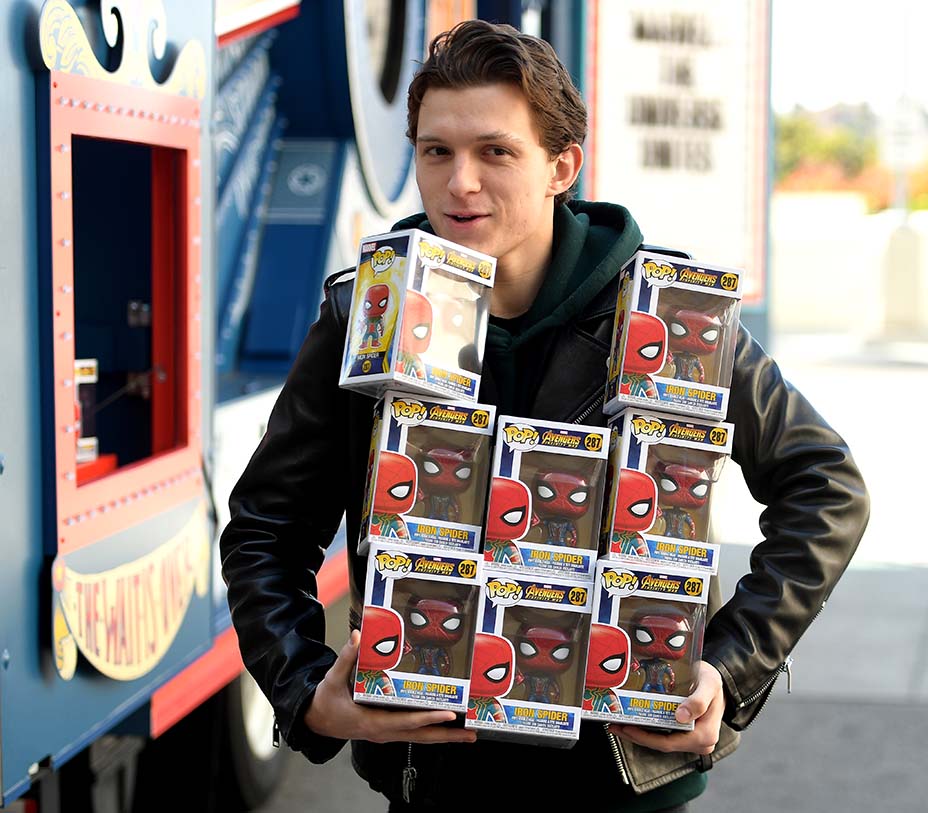 Built on a solid foundation of Pops, Funko is now in the business of expansion. In 2017, acquisitions were made of Loungefly — a popular niche apparel company that specializes in backpacks — and the U.K.-based animation studio A Large Evil Corporation. In February, Funko acquired a board game company, Seattle-based FPC, with credits like Disney Villainous, Harry Potter: Hogwarts Battle and Bob Ross – Art of Chill.

Funko is also gearing up to set down roots in Los Angeles with a 40,000-square-foot brick-and-mortar emporium on Hollywood Boulevard slated to open later this year. As studio calendars are only becoming more densely populated with tentpoles, and genre television content is all but sure to increase with the impending streaming service debuts, Funko will have plenty to Pop-ify.

When asked what the biggest difference is between Comic-Con now and his first 16 years ago, Mariotti offers, “Well, I’m no longer building the booth.”

Comic-Con Winners and Losers From Film, TV and Comics Panels