But despite its achievements, Better Days has become a bizarre sort of success that no one wants to fully claim — neither the film’s director, its home city of Hong Kong nor mainland China. The root cause of the movie’s divisiveness, as is so often the case in China’s repressive creative sector these days, is the country’s increasingly brittle and nationalistic political environment.

Based on the Chinese internet novel In His Youth, In Her Beauty by writer Jiu Yuexi, Better Days tells the story of a high school girl (Zhou Dongyu) struggling with severe bullying and the mounting pressures of China’s all-important college entrance exams. Through a chance encounter, her life becomes intertwined with that of Xiao Bei, a young street thug (played by Jackson Yee, a pop star turned actor). But as the duo form a surprising bond born of necessity, a series of tragic circumstances plunges them toward an accidental killing and a moral reckoning.

Better Days was selected to receive its world premiere at the 2019 Berlin International Film Festival after generating strong buzz within the Chinese film industry during production. But the film was yanked from the festival’s lineup days before its screenings, with word leaking that it had failed to receive necessary approval from China’s Film Administration. 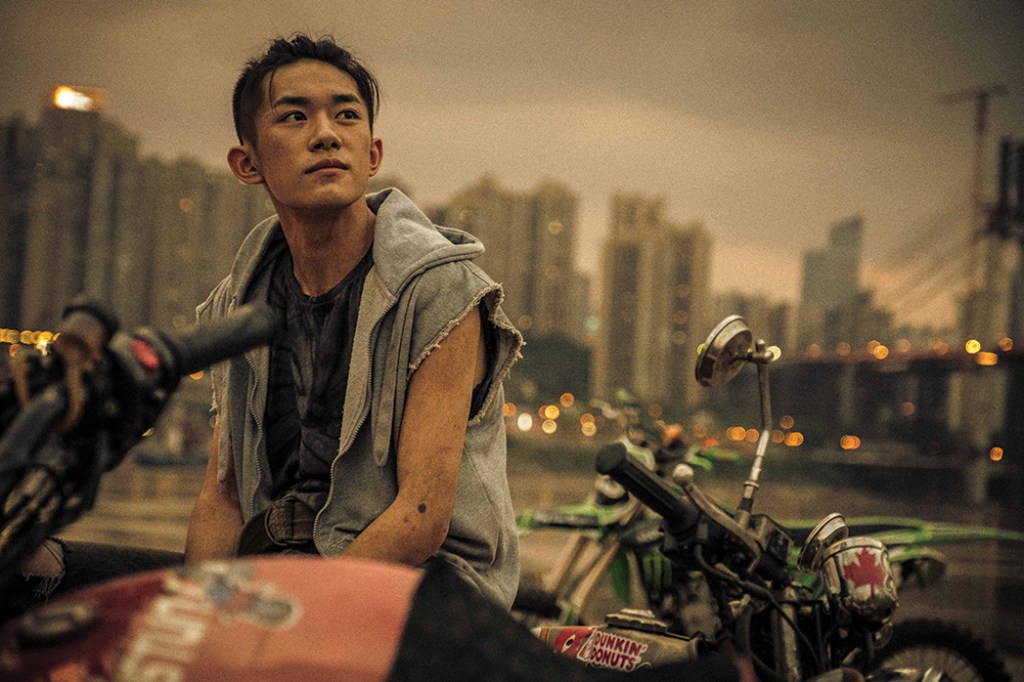 Although Better Days ultimately was classified as a Hong Kong film — where content regulation generally has followed an MPAA-style ratings system with limited political interference — the movie was designed for the mainland Chinese market, meaning that approval there was vital to its commercial future. The movie also was co-produced by Hong Kong’s Golden Village Pictures and a slew of mainland Chinese studio partners and financiers. Thus, Tsang and his Better Days postproduction team began an arduous, months-long process of making adjustments to the film to accommodate demands from Beijing.

According to sources close to the production who spoke anonymously because of the sensitivities around the film, Tsang received direct instructions from the film’s Chinese investors as well as from government censors on how to reshape certain scenes. It was a lengthy process of trial and error — familiar to many in the Chinese industry — whereby the filmmakers were compelled to repeatedly test the boundaries by presenting a new, fine-tuned version for approval, only to have it rejected and return to the editing bay all over again. “It was somewhat a tug-of-war,” a source close to the film says. During the process, the film’s long-planned June 2019 China release date was scrapped, with the production companies referring to the film’s “level of completion” and “premarket assessments” as their public reasons for the postponement.

“The director was quite adamant in retaining what he thought the story required and keeping its integrity, all for the good of the film,” says the source close to the project. “He wanted to maintain his vision as much as he could. So he tried his best to stand his ground for quite a while.”

Better Days ran afoul of the censors primarily because it hit too close to home, sources say. In mid-2019, the People’s Republic of China was in the process of celebrating its 70th anniversary. The pageantry had come with orders to content creators, both implicit and explicit, to sing the nation’s praises — and certainly not to shine a harsh light on the reality of urgent social ills, as Better Days does.

Classroom bullying is a universal blight in school systems everywhere, but in Better Days‘ case, the film found its theme in a real-life crisis that came to the fore in China in the mid-2010s, when a string of deaths involving bullied kids throwing themselves off the upper floors of school buildings became a subject of public outcry. Better Days, which began development in 2017, pulled various details directly from reality. Schools in the film, which is set in Chongqing, install wire mesh panels around their upper-floor, indoor-outdoor hallways to prevent even the possibility of jumping, which is exactly what some schools in that region of China had done.

The original version of Better Days that was submitted to Berlin ran 138 minutes, while the version theatrically released in China lasted 135 minutes. The various changes that were made appear intended to blunt the most scathing aspects of Tsang’s social critique, while simultaneously communicating that the wisdom of China’s party leaders has already righted many of the ills the film presents. Some of the changes didn’t seem so significant — cuts to scenes of the male lead, Bei, and a fellow teen criminal slapping each other’s faces a tad too aggressively, for example, or another sequence in which Bei’s hand lingers conspicuously on the thigh of the young female lead character, Chen.

But one of the most overt sets of edits removed all references to an entire real-life scandal that took place in China in the mid-2010s. In the uncut version, Bei works as an illicit debt collector engaged in the once-prevalent practice known as “naked loan service,” which took off on the fringes of the peer-to-peer lending boom that briefly, and disastrously, took hold in China for lower-income people who couldn’t get loans from established banks. The practice entailed risky borrowers providing unlicensed creditors with naked selfies in which they clearly held up their government ID cards — with that material used as collateral to make sure the debts, plus heavy interest, were paid back. The Chinese government subsequently cracked down on the practice after scores of identifiable nude pictures of unfortunate souls who were unable to pay back their loans flooded the internet. In the original cut of Better Days, Bei is employed by one of these naked selfie loan sharks, with Chen’s mother owing the criminal money. In the altered version, references to the whole scandal — which was a nationwide scourge — are totally erased. Chen’s mother is still shown to have owed debts to a loan shark, but only default notices with her headshot are distributed by the bullies at Chen’s school, rather than embarrassing nude images of her mother. Bei’s entire involvement in the loan-shark trade also was taken out.

Among the various cuts to his movie, big and small, the change Tsang seems to have been most irked by was an overhaul of the ending. “The official ending was the one I disliked the most,” he said during an online seminar held by the Hong Kong Screenwriters’ Guild in 2020, “I thought it was OTT [over the top] and resembled a teenage TV drama series.” He said a few endings were shot to give his team more options, and the one he and the production team preferred and originally used closed on a much darker note for the two young protagonists; he conceded that it was “a bit bleak.” Instead, the ending that was released involves an epilogue that shows Chen, the main female character, played by Zhou, having learned from her mistakes and now making a positive impact in the world. The film concludes with a montage presenting a list of all the policies China’s government has introduced in recent years to tackle and expunge the problem of school bullying — a postscript that’s hard to picture as having been Tsang’s idea.

Better Days finally opened in mainland China in October 2019, but regulators gave the film official clearance to release just three days in advance, allowing little time for Tsang and his distributors to mount a marketing campaign. Nevertheless, the movie became a word-of-mouth phenomenon, opening to $85.1 million. Many reviewers highlighted the emotional intensity of the story and realness of its subject matter — a relative rarity on Chinese screens. Like the film’s reworked ending, however, the post-script to Better Days‘ release saga has been all about political posturing.

Initially, the version of the movie that was released seemed to have full official support in China. In February 2020, Better Days received 14 nominations at the Hong Kong Film Awards, prompting Global Times, China’s nationalistic, state-affiliated tabloid, to suggest that it “might make history like Parasite” on behalf of Chinese-language cinema. The awards drumbeat continued throughout the year, making Tsang a rising star in the mainland. In December, he landed a lucrative and highly visible gig as a judge and celebrity mentor, alongside stars Zhang Ziyi and Yu Zheng, on the wildly popular reality show I Am an Actor. But shortly into his tenure on the show, nationalistic Chinese social media users began circulating old posts allegedly written by Tsang’s wife, Hong Kong actress Venus Wong, which voiced support for Hong Kong’s 2014 pro-democracy Umbrella Movement. Photos allegedly showing Tsang and Wong attending rallies in Hong Kong also proliferated. Not long after, Tsang unceremoniously exited the show.

Better Days is the first Chinese-language film to be nominated for an Oscar since Zhang Yimou’s Hero in 2003. But the official reception of Tsang’s honor by the Chinese state press has been decidedly frosty, with the nomination receiving only passing mentions. Chinese director Chloé Zhao, nominated for best director for Nomadland, has received a similarly suppressed — even censored — treatment online in China ever since nationalists unearthed two brief interview comments she made in the past that appeared critical of China (one publication acknowledges misquoting her). The nomination of the Hong Kong pro-democracy protest documentary Do Not Split in the short documentary category has only deepened Beijing’s official animus toward the Oscars. In March, authorities ordered local media outlets not to air or cover this year’s Oscars live, and it remains in question whether a delayed — and censored — broadcast will be carried in China at all.

In Tsang’s native Hong Kong, the local audience has grown just as skeptical of Better Days, albeit for completely different reasons. Online consensus in Hong Kong is that the film hardly represents Hong Kong and its unique culture, thanks to a story set only in mainland China, a cast entirely from the mainland, mostly Beijing-based financial backers and Mandarin spoken rather than Cantonese. Since its inception, the project has been viewed as a mainland Chinese film, and the announcement of its selection by Hong Kong as the territory’s official Oscars submission was met with public outcry. Indeed, Hong Kong filmgoers actually rejected the film when it was released, twice. During its two releases in Hong Kong, the first in December 2019 and the second in May 2020, for a total of 76 days, the movie earned a combined HK$1.19 million ($153,000) — a dismal performance for any sizable movie in the city. For many in Hong Kong, their first Oscar nominee in decades is nothing more than another important opportunity to fight to retain their identity and culture — and to reject the encroachment of China’s draconian leadership and mammoth market influence.