[This story contains spoilers for Insidious: The Last Key]

In the first two installments of James Wan and Leigh Whannell’s long-running Insidious franchise, the ostensible leads were a pair of gorgeous thirtysomething stars: Rose Byrne and Patrick Wilson, who played a young couple tormented by malevolent spirits. But as any fan knows, the films were secretly a showcase for Lin Shaye, the longtime character actor who stole nearly every scene as pastel-loving parapsychologist Elise Rainier.

When Byrne and Wilson departed the franchise in Chapter 3 (actually a prequel), Shaye was pushed to the forefront and became the connective tissue of the series, providing a rare genre showcase for a woman over the age of 65. The creators’ willingness to make a “woman of a certain age” the centerpiece of a horror/action movie is laudable, and Elise’s embracing by the series’ younger fans is proof positive that millennials don’t care how old their hero is (as long as she’s a badass). While on its face (and often in practice) the franchise is nothing more or less than pure popcorn entertainment, given the deeply entrenched sexism and ageism of the film industry, there’s something quietly progressive about the filmmakers’ willingness to give Shaye such a sizable platform.

An 'Insidious' Refresher Course for Before 'The Last Key'

Fans of the franchise will be heartened to know that this weekend’s Adam Robitel-directed Insidious: The Last Key is the actress’s most substantial turn in the series yet. Set after the events of Chapter 3 but prior to the haunting depicted in the first film, the follow-up delves into Elise’s tortured backstory and uncovers the childhood wounds that inform her demon-batting fearlessness. The plot opens in 1953 at a remote house in New Mexico, where a grade school-aged Elise (Ava Kolker) lives with her parents, Aubrey (Tessa Ferrer) and Gerald (Josh Stewart), and younger brother Christian (Pierce Pope). Even at this young age, Elise has begun demonstrating her gift for communicating with the dead, a fact that doesn’t escape the attention of Gerald, who fears his daughter’s abilities and physically punishes her for it — first by beating her with a rod, and later by locking her in the home’s cavernous, spirit-infested basement. This opening scene of child abuse is both unexpected and unsparing, and it’s given extra heft by Aubrey’s frantic, fruitless attempts to keep it from happening.

While The Last Key’s rendering of childhood trauma isn’t particularly subtle or original, the prologue does an efficient job of establishing the circumstances that formed Elise into the woman we’ve come to know over the previous three movies. Better yet, it gives the film a thematic weight that the other installments mostly lacked, and it pays off in occasionally surprising ways. This is particularly true when it’s revealed that the “ghost” of an abused woman Elise glimpsed as a teenager was actually a living, breathing victim, freshly escaped from Gerald’s basement prison. 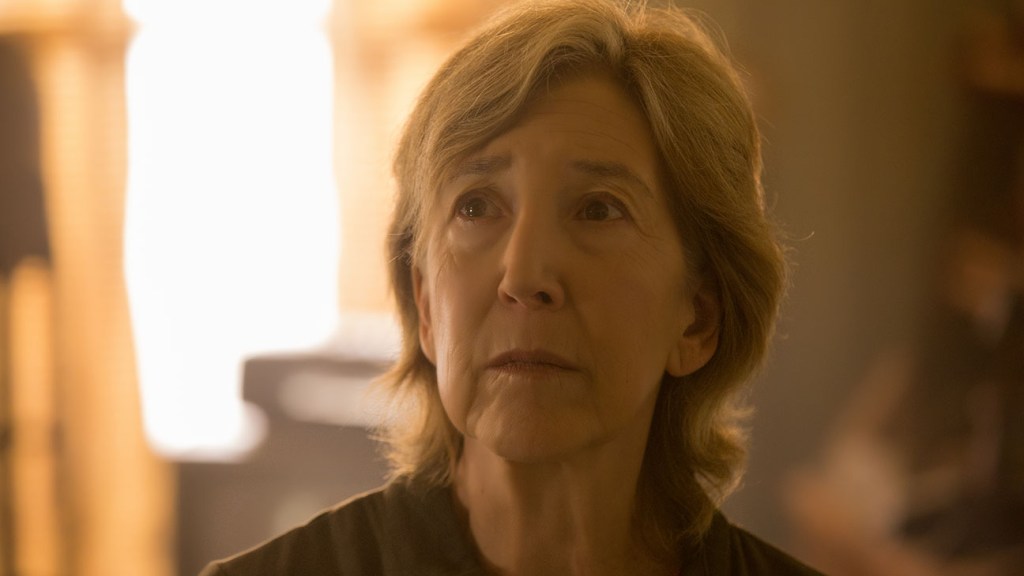 Moreover, in the modern-day narrative, we learn that the new owner of the house (Kirk Acevedo) has repeated this sick pattern by imprisoning another woman in the same fashion. The establishment of the latter victim as a flesh-and-blood person rather than the J-horror-esque wraith she initially appears to be is one of the film’s slyest reveals, niftily subverting our expectations of the genre. With these twin reveals, The Last Key demonstrates how the demons of one’s past can reverberate in the present, and reminds us that behind every ghost story lies a real human being who suffered and bled.

But because The Last Key is a horror film first, the collective male rage of which Gerald is merely a symptom is represented by a demon named KeyFace (Javier Botet), a truly frightening spook with spindly limbs, jagged teeth and claws that manifest as scalpel-like keys that it uses to penetrate women’s bodies (in scenes heavily suggestive of actual rape). Eventually it’s established that the demon has been playing puppet master, possessing first Gerald and later the house’s current tenant to commit vile acts against women.

In the realm of The Further (the extradimensional world established in the previous movies), meanwhile, KeyFace imprisons his female victims in cages, sometimes even chaining them by the neck and leading them along like dogs. These metaphorical parallels to real-life female subjugation and exploitation are queasy and disturbing, making it all the more crowd-pleasing when Elise (ably assisted by the righteous spirit of her deceased mother) does battle with the slimy demon in the third act and wins.

If nothing else, Whannell and Robitel’s attempts to do something richer and arguably darker with the Insidious franchise than we’ve seen previously gives it an unexpected edge. But of course, the attempt isn’t perfect. Most relevantly, they undercut their genre critique of misogyny by inserting one unfortunate element: the weird, off-putting lecherousness of Elise’s ghost-hunting sidekicks Tucker (Angus Sampson) and Specs (Whannell).

Tucker and Specs have functioned as lovable doofuses in all four Insidious entries so far, but I can’t recall them ever coming across this unseemly. In one sequence about halfway through the film, they return with Elise to her hometown and subsequently meet Imogen (Caitlin Gerard) and Melissa (Spencer Locke), two beautiful young women who turn out to be the daughters of Elise’s estranged brother Christian (Bruce Davison). From the get-go, Tucker and Specs are tripping over themselves to impress them — fine — but the women’s initial casting as sex objects is never balanced by actual character development. Throughout, the two are a step above ciphers, existing merely to serve the functions of the story (and, probably, to add a dash of sex appeal). 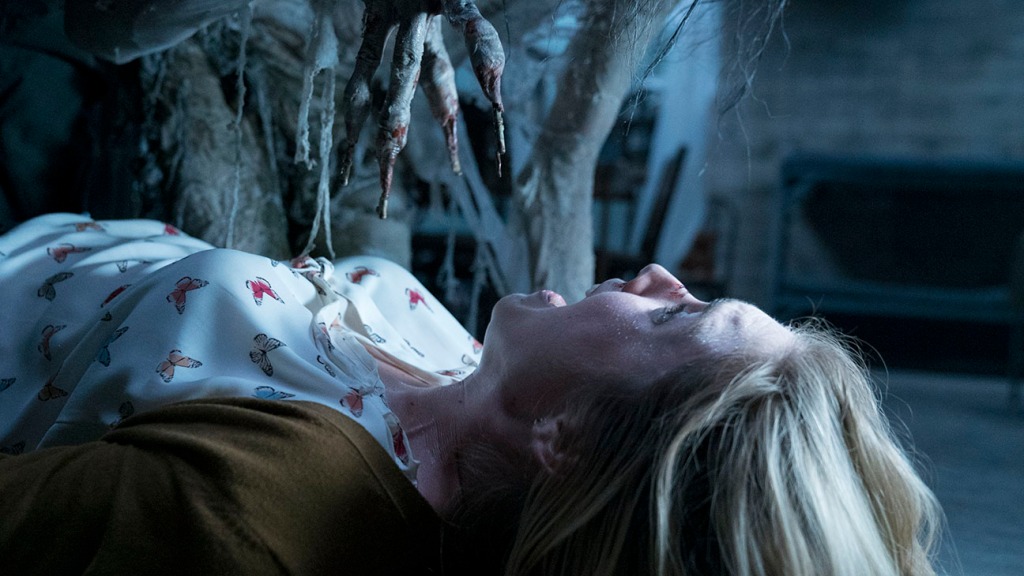 In one particularly discomfiting scene, Melissa is terrorized by KeyFace, who leers over her supine body while probing her exposed skin with a crooked finger. Though the association is clearly unintentional, it’s a moment that could easily be read as a grim but logical extension of Tucker and Specs’ own unabashed ogling and occasional handsiness (“Don’t touch the subject,” Tucker warns Specs as they hypnotize one of the women later on). Even Imogen, eventually revealed as an Elise-like psychic, is given very little to do aside from rebuffing Specs’ increasingly insistent advances and lending Elise a minor assist in The Further.

At best, the would-be romantic subplot between Specs and Imogen is strained and unconvincing. The courtship, if you can even call it that, ends with a kiss that I suspect was meant to be awkward and sweet but instead registers as… kind of gross. It’s telling that the last we see of Imogen, she’s the surprised recipient of an aggressive, out-of-nowhere liplock while inches away, Tucker seductively eats Jell-O while making eyes at her bedridden sister. Importantly, all of this is treated with a smirk and a wink, not only by the other characters but, by extension, the filmmakers themselves. By the end of the movie, the young women aren’t characters so much as receptacles of the male gaze.

Still, in its contradictions, Insidious: The Last Key is actually sort of fascinating, making it a much more engaging watch than it otherwise might have been. On the one hand, Whannell and Robitel have made a franchise film that dares to present a relatively complicated and unapologetic over-70 heroine at its center, and which makes earnest if often clunky stabs at progressiveness. On the other, they’ve dabbled in many of the same “boys will be boys” tropes that have given the horror genre a reputation for misogyny. As odd as this feels to write, there’s more going on in The Last Key than meets the eye — and for a fright flick released in the dead of January, that’s something.