While Tomm Moore and Ross Stewart were co-directing a segment for Salma Hayek’s 2014 animated feature The Prophet, the pair decided to make a film to complete the Cartoon Saloon-produced “folklore trilogy,” which included 2009’s The Secret of Kells and 2014’s Song of the Sea, both of which were directed by Moore and Oscar-nominated.

“We came up with the seed of an idea, which was about empathy, about a hunter becoming the thing that [villagers] were hunting,” explains Moore, who is a co-founder of Cartoon Saloon, the Kilkenny, Ireland-based animation studio. They discussed Oliver Cromwell’s conquest of Ireland during the mid-1600s, which is said to have contributed to the extinction of the country’s wolves, as well as local folklore about a people who transform into wolves when they fall asleep. “A lot of that folklore got lost with the species,” says Moore of the seed for what became Wolfwalkers, which had a limited theatrical release through North American distributor GKIDS and then became the first original animated feature from Apple TV+.

Will Collins (Song of the Sea) wrote the Wolfwalkers screenplay based on their story, which is set in 1650 Kilkenny and follows a young English girl named Robyn, whose father is forced to hunt wolves by the authoritarian Lord Protector, based on Cromwell. She befriends a girl named Mebh, who is part of a tribe rumored to morph into wolves at night.

Thematically, the story expanded beyond initial issues of animal rights, species extinction and habitat destruction. Says Moore, “We started talking about the polarization we still live with to some extent today in Ireland and that we see all over the world, where people who have a lot in common and have everything to fight for together tend to lose empathy because of authoritarian rulers and tradition teaching them the ‘other’ are to be feared.” 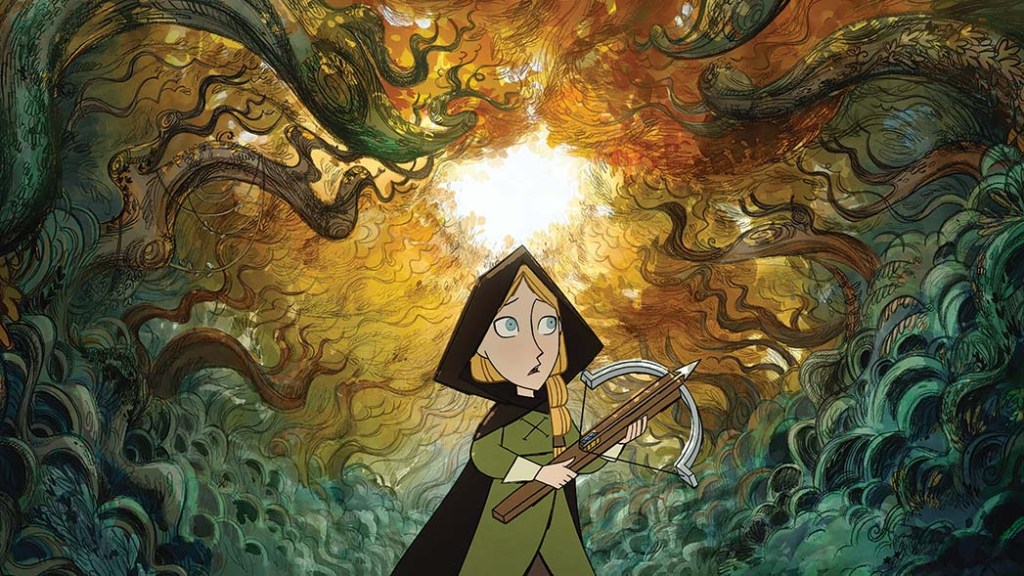 The expressive visual language of the hand-drawn film reflects contrasting societies. The young Robyn lives in a town, controlled by the Lord Protector, that she finds to be something of a cage, so the visuals were designed to reinforce that. “We referenced 17th century woodcuts from the time, which were very oppressed, angular and quite rough and almost savage,” Stewart says. “Thankfully, we had printmakers here in the studio that would help us achieve that look, and then to contrast with that, the look of the forest had to be as free and energetic and immersive and just colorful and wild as possible. We had a lot of very sketchy lines and then very loose coloring underneath like watercolor painting, just almost impressionistic.”

Robyn’s and Mebh’s character designs also reflect the two styles: “Robyn is quite angular, and she almost is made up of segmented pieces. There are a lot of straight lines. There are a lot of divisions within her because she comes from that place of Cromwell society. Mebh, in contrast, is all curves, is all kind of fancy shapes, is very stocky, and it shows how wild and instinctive she is.”

Locksmith Animation Reteams With DNEG on 'That Christmas'