“An action epic evolving from the world of international espionage.” It’s the official description for Christopher Nolan’s next film, Tenet, but it could very easily apply to Nolan’s 2010 mind-bender Inception. As details leaked out about Nolan’s new project, Inception was mentioned numerous times for comparison, whether it be in regard to how Tenet will supposedly deal with the time continuum or tackle the world of espionage. Nolan brings similar elements to all of his films. Could his biggest surprise of all be that Tenet and Inception are connected?

The new teaser, which dropped in select theaters Thursday, offers some clues, and the idea of an Inception sequel is not new. In 2010, Nolan himself suggested that he might expand the universe through a video game. While that hasn’t panned out (so far), when the film came out, Warner Bros. released two Inception prequel comics written by Inception co-producer Jordan Goldberg, titled The Cobol Job and The Big Under, which chronicle the missions leading directly into the film. Nolan continued this practice through an Interstellar prequel comic, which tells the tale of Dr. Mann (Matt Damon). All things considered, the prospect of a return to Inception’s universe, in some form or fashion, is not too far-fetched.

Inception, which starred Leonardo DiCaprio and was a breakout role for Tom Hardy, told the story of a man who committed heists while inside dreams. Nolan has always said that the world of Inception has endless possibilities — that dreams could reflect “the infinite potential of the human mind,” as he told Wired in 2010.

Revisiting the Inception universe through a film might seem backward, especially for an original filmmaker of an ever-growing landscape of sequels and reboots, but maybe that would be the point. As Nolan has grown as a filmmaker, his thematic interests have shifted. The Prestige (2006) Inception and Interstellar (2014) all deal with men — likely ciphers for Nolan himself — called away from their family for work. Those films focus on ideas of duty, sacrifice and time lost while away. 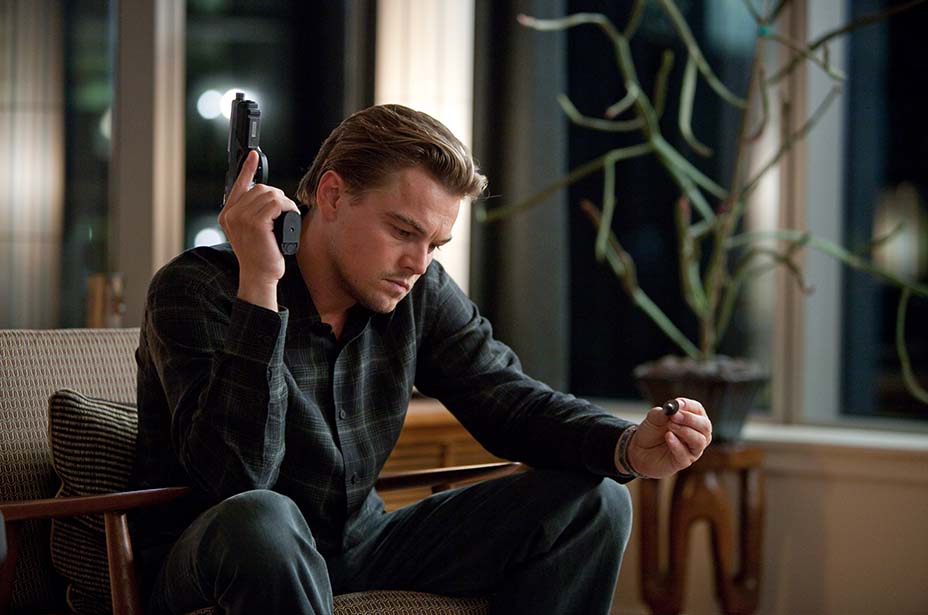 But there’s a key moment at the end of Interstellar that indicates a reorientation of Nolan’s themes. As Cooper (Matthew McConaughey) navigates the tesseract, watching his daughter Murph (Mackenzie Foy), he slowly realizes something. “I thought they chose me,” he says. “But they didn’t choose me. They chose her!”

“For what, Cooper?” the robot TARS (Bill Irwin) asks. “To save the world!” Cooper exclaims.

While Cooper helps Murph by relaying quantum data to the past, it’s Murph who has to translate the data and apply that to her equations to solve the problem of gravity and help humanity leave Earth. She’s the one who leads everyone out into the unknown. At the end of the film, when Cooper wakes up on Cooper Station — named after Murph, not him — a doctor says that Murph is transferring stations to see him. “She is far too old to be transferring from another station, but when she heard that you’d been found…well this is Murphy Cooper we’re talking about,” a doctor says, the reverence clear for her. A proud Cooper responds, “Yes it is.”

In Interstellar, the child becomes the hero by the end. 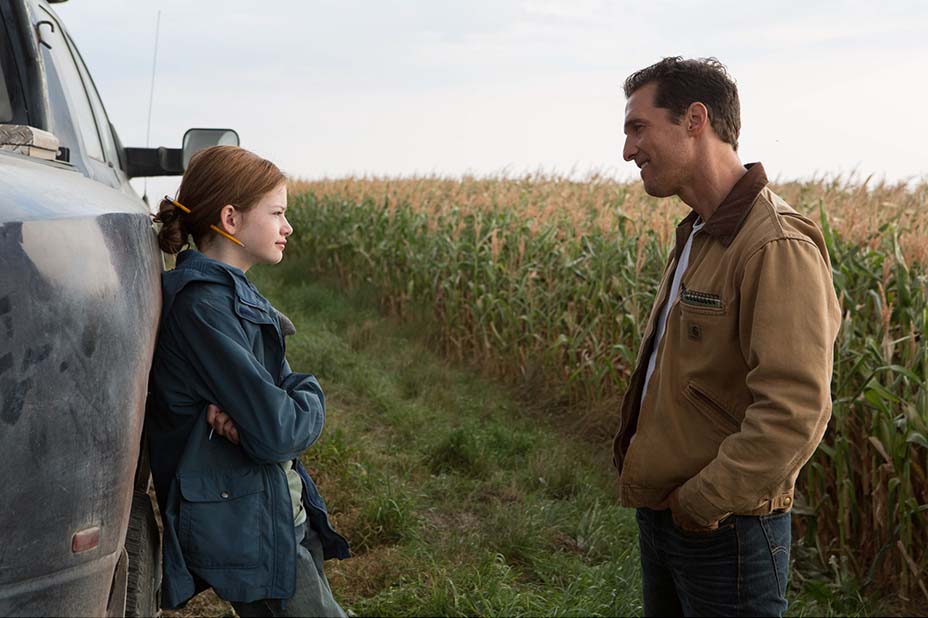 Nolan’s shift toward looking to the next generation began even earlier, in The Dark Knight Rises (2012), in which Bruce Wayne hands off the Batman mantle to a younger man, John Blake (Joseph Gordon-Levitt). And Nolan’s most recent film, 2017’s Dunkirk, is a continuation of that shift, as it’s about young kids in the hellish landscape of war that older men created.

Reflecting on youth while aging seems to be a place where many auteurs like Nolan are headed, specifically the group of auteurs who banded together to bail out the filmstock producer Kodak. While Quentin Tarantino’s Once Upon a Time in Hollywood focuses heavily on the aging of main characters Rick Dalton (Leonardo DiCaprio) and Cliff Booth (Brad Pitt), the ending shifts away from Dalton and Booth, highlighting the hope and potential of the young star taken too soon.

Is Nolan’s next move to make a movie with heroes directly representative of his own kids? His cipher in Interstellar, Cooper, has a few lines of dialogue that were cut at some point in production, but were made public in the published screenplay. These lines point to this thematic possibility: “Murph, a father looks in his child’s eyes and thinks — maybe it’s them…maybe my child will save the world. And everyone, once a child, wants to look into their own dad’s eyes and know he saw how they saved some little corner of their world. But, usually, by then, the father is gone.”

On top of that, the below-the-line crew Nolan is assembling skews much younger than his previous films. Rather than reteam with editor Lee Smith and composer Hans Zimmer, Nolan is working with editor Jennifer Lame (Manchester by the Sea, Hereditary) and Oscar-winning composer Ludwig Göransson (Creed, Black Panther), who could both infuse Tenet with a younger sensibility. It’s rare for the director to make changes to his team, so it’s safe to say that there’s an important reason for those two choices. (Zimmer has said the change was due to him deciding to work on Dune.)

If Tenet follows the thematic idea in that unused Interstellar dialogue, could Nolan take it a step further? In Inception, Nolan’s own son (Magnus Nolan) plays the younger version of the son of Cobb (DiCaprio), suggesting the kids in that film hold special significance for the filmmaker. Could Tenet take the kids from Inception and make them the heroes of their own movie? Could those kids have grown up to look like Elizabeth Debicki and Robert Pattinson? Has Pattinson gone blonder to echo the look of Cobb (and therefore, of Nolan himself)? Do the kids still visit their grandpa, played by frequent Nolan collaborator Michael Caine (also a castmember of Tenet)?

The first teaser trailer for Tenet puts the focus on John David Washington’s character, pointing to him as the main lead, which, as Nolan’s first lead of color, is another step away from the brooding white male heroes of his previous films. The trailer even states, “Time has come for a new protagonist” and “Time has come for a new kind of mission” — both serving as meta-commentary on Nolan’s career and perhaps, if the film is an Inception follow-up, as meta-commentary on the stories and realities of that world.

There’s certainly an overwhelming chance that Tenet has nothing to do directly with the Inception universe. But if it does, Tenet focusing on an entirely separate character sounds like a move Nolan would make. The director doesn’t seem like one who would make a direct sequel, but rather seems like one who would use loose threads. In that scenario, could Washington’s character have his own journey — a new kind of mission — in a world of advanced technology, paralleled next to or intertwined with the supporting journey of the Inception kids?

In another area where Nolan could shift, could a potential follow-up focus on a different area of Inception’s world, rather than on dream tech? In Inception, dream tech was developed for military purposes, so could the military have developed a new kind of dangerous tech in the decades after Inception’s events? (The teaser trailer features a swat team, or some kind of special operative unit — and there have been rumors of a massive stunt involving a tank.)

Could that future world have even developed technology that can bend time, allowing espionage missions to span across decades in the past? In the teaser, Washington moves in an odd manner, almost as though his character is moving in reverse or in some sort of loop.

Could the fight for energy dominance alluded to in Inception have resulted in worldwide chaos? Like how the ending of The Dark Knight led to the chaos of The Dark Knight Rises, could the idea that Cobb and team planted in the mind of Robert Fischer (Cillian Murphy), to break up his father’s company, have backfired and now lead to massive consequences?

Inception ended with Cobb reuniting with his son and daughter, but it also ended on the ambiguity of a spinning top, cutting to black before the audience could see if it fell or not. It’s unlikely that Nolan — who opts not to explain his endings (too extensively) — would directly undermine the way that ending plays in a potential sequel, so perhaps he would create a setup that allows him to work around it: Cobb is dead.

Would that Interstellar dialogue then be the thematic center? Whatever the possibilities for what kind of dangers the Inception kids face, could their emotional struggle lie in the fact their dad is not around to see them saving the world? Could they be traveling back in time, and have to resist the possibility of visiting their father’s time, like how Cobb has to resist looking at his children in his dreams?

The word “tenet” means belief or principle, and obsessive belief. The same kind of beliefs that were at the heart of Inception, whether it be Cobb believing he’ll make it back to his kids, or that idea planted in Murphy’s Fischer.

But the word “tenet” is also a palindrome — it reads the same forward as backward.

The working title is rumored to be “Merry-Go-Round,” and the lettering of the title on the teaser has the final letter E and T flipped upside down, styled as TEN??. These circular metaphors could point to how Tenet might engage with time and how Nolan, famous for nonlinear structures, might structure the film. During the heist in Inception, after Cobb tells his team that they can’t shoot themselves to wake up since the heavy sedative will push them into limbo, he says that going “downwards,” or deeper into the dream levels, “is the only way forwards.” In Tenet, will going backward — perhaps backward in time and space through new tech — be the only way forward with an espionage mission? Moving through space in reverse seems to be what Washington’s character is doing in the teaser.

The idea of going backward to move forward could be key to the next step in Nolan’s storytelling. And revisiting the Inception universe — the step back, to clarify how his thematic interests have evolved, the step forward — would be a potent mode of evolution.