Remember when 3D was Hollywood’s savior? In 2010, 21 percent of total box-office revenue in North America ($10.6 billion), or $2.2 billion, came from 3D tickets sales. That was the year of 3D hits Toy Story 3 and Alice in Wonderland; additionally, much of the revenue James Cameron’s groundbreaking Avatar, released in late December 2009, was earned in 2010.

The biggest 3D draw of 2016 was Jon Favreau’s The Jungle Book, which eared 43 percent of its opening weekend gross from 3D screens. While that pales in comparison to Avatar (70 percent), it was certainly better than the average 30 percent-35 percent that has become the norm.

Still, it did surprise some when Imax announced last week during its earnings call that it would be reducing its 3D slate in the domestic market, citing a “clear preference” for 2D from audiences.

Imax Entertainment CEO Greg Foster tells THR that Imax is not abandoning 3D but taking a more strategic approach to its use of the format. “3D is no longer the default,” he says, explaining that Imax releases about 35 motion pictures per year, and of those, his instincts suggest that an estimated 5-10 would be 3D releases in the foreseeable future.

“We listen to our filmmaking partners,” he adds, saying directors that want to release their movies in 3D will continue to have Imax’s support.

While the format remains popular overseas — globally, 56 percent of all digital screens are 3D, compared to 39 percent in the U.S. and Canada — comScore senior media analyst Paul Dergarabedian suggests much of the blame for 3D’s decline in the States falls on Hollywood. He notes that at its height of popularity in 2010, “The industry was excited about 3D being able to enhance the bottom line. Then you had many movies that were not originally conceived or shot in 3D [converted to 3D] in order to capitalize on the opportunity, and I think the audience really noticed the difference. The quality was not where it should be. Not only the quality, but the higher ticket prices, eroded the good will.”

“We believe films should be made in native 3D or by taking the time to convert it properly, as we did with Titanic and T2,” says James Cameron’s Oscar-winning producing partner Jon Landau. “From a dramatic storytelling standpoint, when the screen plane disappears, you have made a strong bond with your audience. That’s what we’re excited about.”

He points out that Alita: Battle Angel, produced by Cameron and Landau, was lensed in native 3D by director Robert Rodriguez and will be released in Imax 3D next summer. And of course, the four upcoming Avatar sequels will also be made and released in 3D.

Jon Favreau, who made his live-action retelling of The Jungle Book with 3D in mind and is planning the same for his upcoming live-action Lion King, has a similar view. “Technology is most effective in film when it works in synergy with storytelling. In the case of The Jungle Book, the use of 3D and Atmos sound added to the immersive experience that contributed to the illusion that the primarily CG environment was real. We planned it from the beginning and captured the images using 3D cameras. Audiences were rewarded for seeking it out in theaters as it delivered a unique experience that was different from home viewing.” 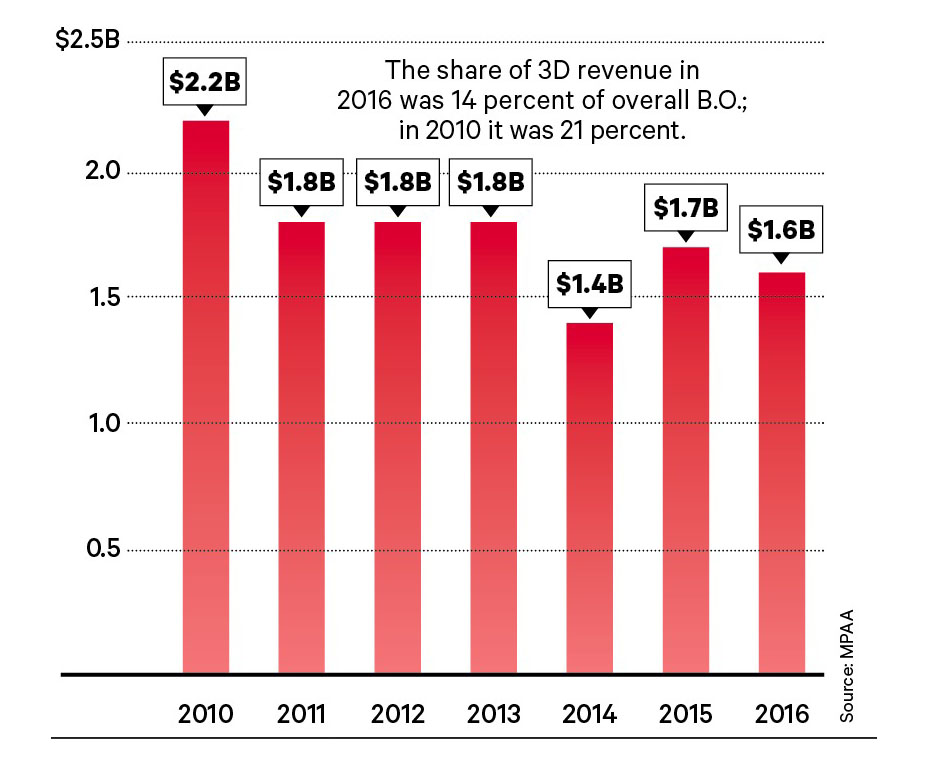