Wednesday morning, Universal Pictures released the first trailer for its latest Blumhouse joint, Tate Taylor’s horror-thriller, Ma. While the film may not have been on many people’s radar a few months ago, the trailer suggests that Ma might end up being one of this year’s most talked about genre flicks. The film follows a group of teenagers who befriend a woman, Ma (Octavia Spencer), who buys them alcohol and lets them party in her basement. But Ma’s intentions aren’t what they seem as she starts taking a hands-on approach to the lives of these teenagers, while guarding a dark secret. Blending the psychological intrigue of The Gift (2015) and the uncanny terror of Get Out (2017), Ma looks like it has makings to be Blumhouse’s next cultural touchstone. But it’s not simply the psycho-stalker element that has us intrigued, nor the group of rowdy teens destined to die badly. Rather, it’s the subtle suggestion that Ma may also fit within the social-thriller horror construct that Jordan Peele has carved out.

Undoubtedly a result of considering the racial elements of horror as highlighted in Shudder’s new documentary Horror Noire, it’s difficult to watch this trailer and not bump up against the idea that Ma has more on its mind than teenage thrills. Ma not only has the distinction of being a black-led horror film, an increasingly common occurrence that will hopefully become the new norm, but it also might be tackling one of cinema’s oldest stereotypes. The mammy, a nurturing and submissive black woman who takes care of the children of white families is one of Hollywood’s oldest figures, one born of literature like Harriet Beecher Stowe’s Uncle Tom’s Cabin. In film, the mammy was popularized by Oscar-winner Hattie McDaniel in Gone with the Wind (1939) in which she played a character named nothing more than Mammy. While the overt stereotype has largely fallen out of fashion in contemporary film, those qualities are still often seen in black nurses, housekeepers and waitresses in film and television whose existence is purely to serve and console white leads.

So what does this have to do with Tate Taylor’s film? Well, a couple of things. When Octavia Spencer hosted Saturday Night Live in 2017 she jokingly referenced how glad she was to finally stop playing the sassy nurse character, a role that defined much of her early career. She has played the modern mammy figure, but she’s also played a more traditional version of the character in Taylor’s The Help (2011) for which she won the Academy Award. There was a lot said about The Help during its release and the time since, conversations regarding the portrayal of supportive black housekeepers whose stories were still secondary to the white women they worked for. Many critics saw Spencer’s win as one for a role strikingly similar to McDaniel’s Mammy and evidence of how little Hollywood had changed regarding the depiction of black women and how the industry chooses to celebrate them. Last year, Viola Davis told The New York Times she regretted starring in The Help, “but not in terms of the experience and the people involved because they were all great. The friendships that I formed are ones that I’m going to have for the rest of my life. I had a great experience with these other actresses, who are extraordinary human beings. And I could not ask for a better collaborator than Tate Taylor.” Our awareness of racial depictions, and how we feel about black representation in America is at a very different place now than it was eight years ago. This new collaboration between Octavia Spencer and Tate Taylor can be seen as a way to address that, to comment on the mammy figure they helped popularize in The Help and tear apart that image. 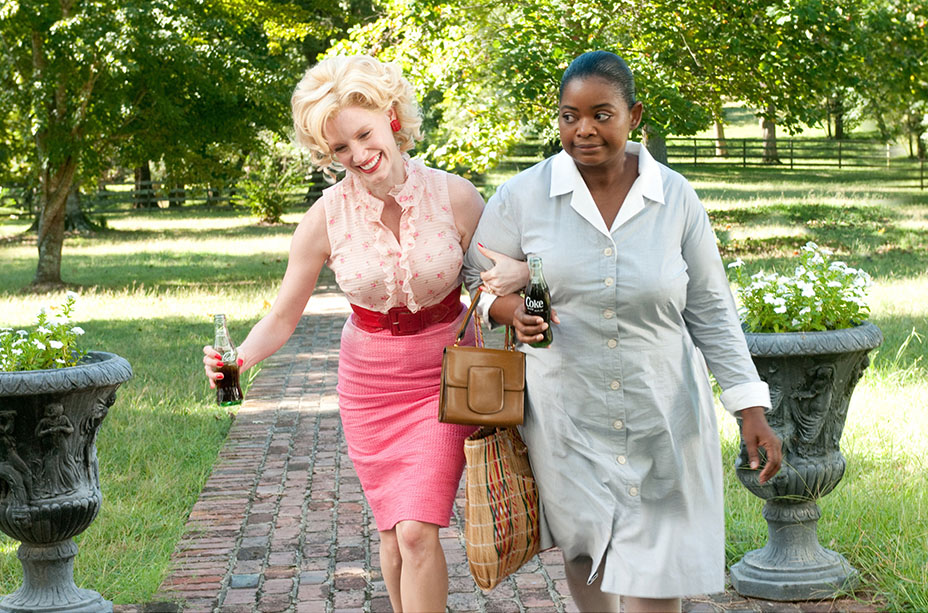 There are several things about Spencer’s Ma character worth noting in the trailer. The first is that when the teenagers first meet her she appears to be wearing a nurses’ smock, a comment both on Spencer’s acting history and the most prevalent image of the mammy today. The second is the African masks we see adorning the upstairs, forbidden part of Ma’s house. Not only does this deliberately comment on the character’s blackness, in such a way that its evident that she could not be substituted with a white woman, but it also makes the upstairs an area of African-American identity. In the past, the help was usually relegated to basements and backdoors, forbidden from being seen upstairs. So the fact that Ma keeps these white teenagers downstairs and forbids them from going upstairs seems like a reversal of that prior racial divide and hence her line “how does it feel to be on the outside looking in?” The third and most haunting moment from the trailer is Ma painting white the face of who appears to be the sole black character in the group of teens. This whitewashing or whiteface is also a reversal of an old Hollywood tactic, in this case it might be a deliberate reference to Al Jolson’s role in The Jazz Singer (1927) in which the actor donned blackface to sing “My Mammy” in one of Hollywood’s most cringeworthy moments. Ma’s act of painting the face of a black teenager may be frightening observation on his complicities in letting his white friends take a sense of ownership over a black woman.

There’s a welcome sense of unease that comes with this film and the idea that it may be just as hard-hitting as Get Out, though instead of young black masculinity being the focus, it’s middle-aged black femininity. There is arguably no better time for a film like this that could stand to challenge a long-established status quo. While many will likely assume the title Ma is short for mother, the trailer, through its biting racial commentary suggests its short for Mammy, which gives this film an edge we never knew we needed.

How 'Horror Noire' Primes Viewers for a Year of Black Horror