If you Google Jean-Claude Van Damme, you’ll find stories that seem too strange to be true.

Did he really get his start working as a bouncer at Chuck Norris’ bar? Was he once so image conscious that he had a camera dedicated to shooting just his muscles on set? Did he really frustrate his Street Fighter director by calling “cut!” during a complicated set piece? And was he fired from 1987’s Predator for diva-esque behavior, or did he quit in a blaze of glory?

That’s Van Damme. He’s in the middle of explaining why he quit Predator, perhaps the most debated story in all of JCVD’s lore.

In 2017, The Hollywood Reporter published a Predator oral history that contained six differing accounts of what led to Van Damme’s exit as the film’s alien monster. They range from the mundane (the studio decided he was too short) to the humorous (he wanted the Predator to show off his kickboxing skills) to the explosive (he yelled an obscenity at producer Joel Silver during an epic dust-up).

Now Van Damme is finally sharing what really happened, according to him.

“I’ve got my friend next to me and I said, ‘Man, I ain’t going to make it,'” Van Damme says, describing being put in a cast to make the Predator costume. He had trouble breathing. He was becoming overheated. And that was just the start of his problems.

The final costume saw Van Damme standing on stilts. The costume also reduced his mobility so much that he felt the stunts the production demanded of him would be too dangerous. So he made an unusual decision for a guy who was not yet a star: he defied a powerful producer.

“When Joel asked me to jump, I knew it was going to be a bad one. I said, ‘This is impossible, Joel. I think we’re going to have a problem.’ Then he replaced me,” recalls the 58-year-old actor. 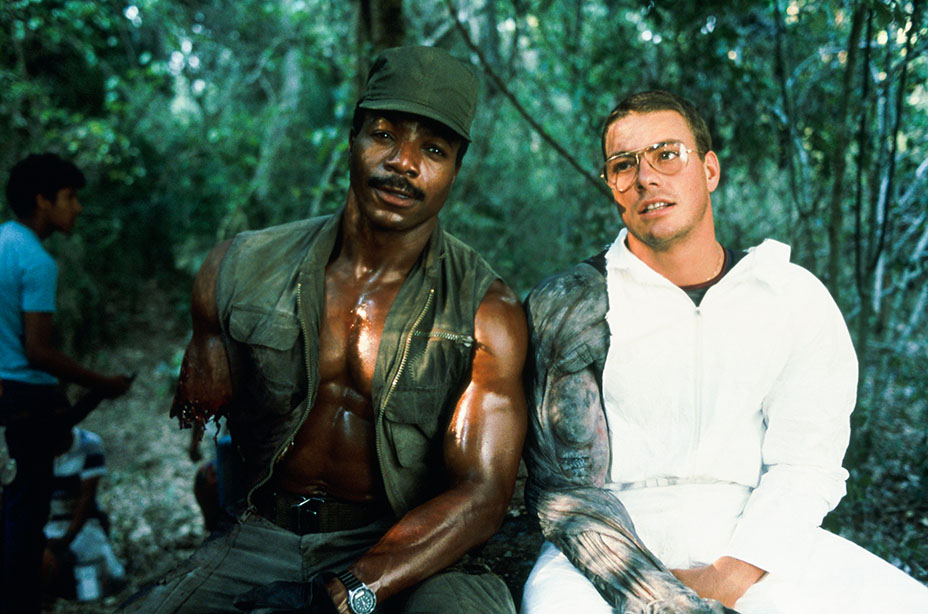 At times, revisiting the past has been a chore for Van Damme, who has expressed frustration with old stories — like his admitted affair with Street Fighter co-star Kylie Minogue — being dredged up over and over again by the press. But today he’s relaxed, sporting a black T-shirt and trademark shades. He’s chatting amicably about of his new movie We Die Young (in select theaters and on VOD Friday) and his journey from Brussels to Hollywood.

Van Damme saved up money as a youth selling flowers on the streets, eventually opening a gym and stashing away enough for a ticket to the United States. It was there that he was introduced to Chuck Norris and worked as a bouncer at his Long Beach bar. (Yep, that Internet story turns out to be true.)

“American people are big people. I didn’t have any fight, thank God. I was a good schmoozer, simpatico and no incident happened,” says Van Damme, who trained with Norris three days a week during those days.

A few years go by. He gets cast in Predator and is soon replaced. Then comes another legendary story he confirms: the first cut of 1987’s Bloodsport, the film that would be his breakout hit, was so bad that screenwriter Sheldon Lettich called up the star in a panic and begged him to come back from Thailand, where he was shooting Kickboxer.

“‘You’re movie looks like shit,'” Van Damme recalls Lettich saying. “I came back from Thailand, and we saw the cut and I wept.”

He begged producer Menahem Golan to let him re-cut the film, and he delivered a much-improved version with the help of Lettich and The Towering Inferno editor Carl Kress. Golan had not seen the new cut and was planning on banishing the movie to VHS, but he agreed to put the new version on one screen in New York. The positive reaction convinced Golan to give Bloodsport a proper release, and just like that, Van Damme was on his way to stardom. 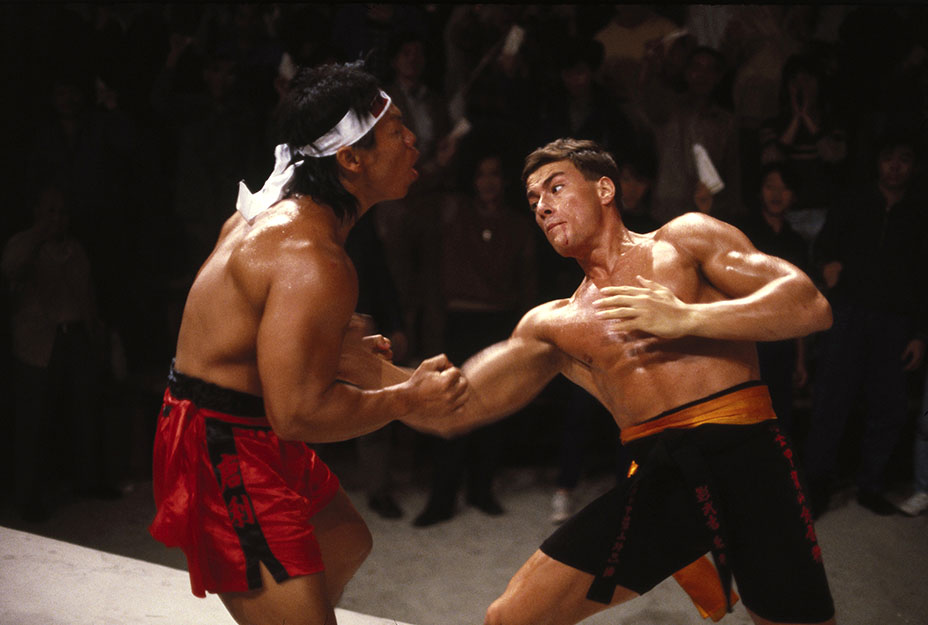 But what kind of star would he become? The actor was known for his athleticism and charisma. As his star power rose, so too did his reputation for being savvy about his image, to the point that at times it could rankle his creative partners. Hard Target director John Woo has said Van Damme demanded a camera dedicated to showing the actor’s muscles. (“No. I will tell you no,” Van Damme says when THR asked about this.)

Street Fighter director Steven E. de Souza has told a story that could either be taken as endearing or perhaps irritating if you’re a filmmaker. In a 2014 Polygon interview, De Souza said the production team spent hours setting up an effects-heavy sequence — and in the middle of filming, Van Dame called “cut!”

The actor, who played the American Flag-bicepped Col. Guile, thought he’d flubbed a line. The director was flabbergasted, as only a director should call “cut!” on set. Van Damme doesn’t remember, specifically, but says that sounds like him.

“That may be possible,” he says. “I’m that type of guy. Because if you start something and the dialogue is not right, it doesn’t follow truthfully.” 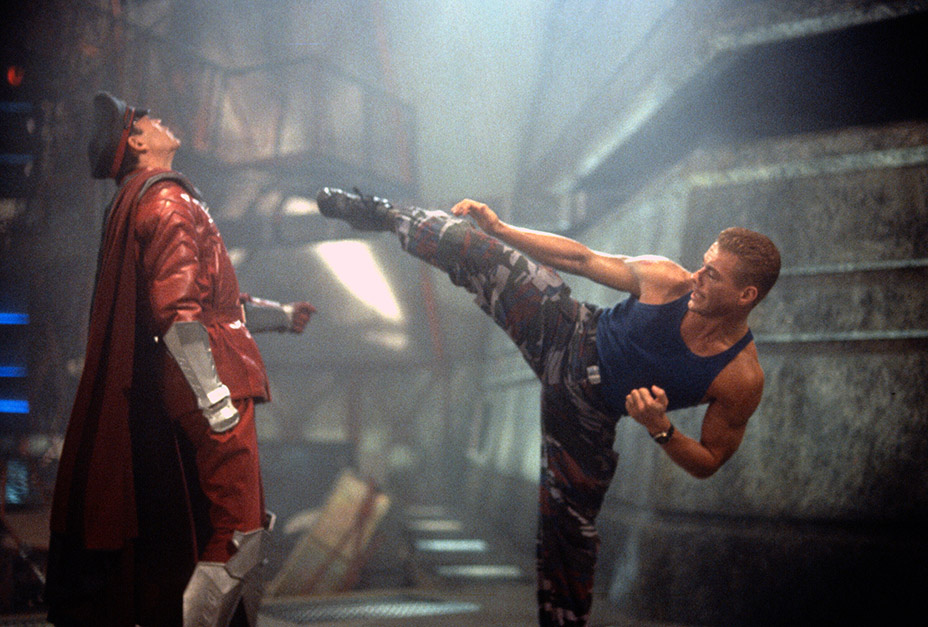 Another internet urban legend (or is it?): Van Damme turned down Sylvester Stallone’s offer to join the first The Expendables movie, because, as Stallone apparently has said, Van Damme hated the idea that his character would have lost a fight to Jet Li.

Not true, says Van Damme. The real reason? He was too busy with a movie he was directing called The Tower and tried to lure Stallone to join his movie instead.

“Nobody can buy me. That’s one thing that’s beautiful about me in Hollywood. Nobody can put a leash around my neck. I say what I want,” says Van Damme, who passed on the action team-up movie (though he later would play the villain in The Expendables 2).

Not long after the time Stallone was assembling a who’s who of ’80s strong men for The Expendables, the tabloids reported that in 2010 Van Damme was spotted at a bare-knuckle brawl with Russian President Vladimir Putin.

That’s legend? That’s true, Van Damme says, as he pulls out some chapstick from his pocket to illustrate a key point in the story.

Here’s how it went down: the actor arrived at the brawl casually dressed. Everywhere he goes, he brings a small bag containing chapstick, dental floss and other comforts, and that day was no different. He put the bag under his chair. Finally, Putin arrived in the auditorium, dozens of security personnel along with him.

“Everybody is standing up. People love him in Russia. I stand up,” says Van Damme, who was soon embarrassed to realize that he felt underdressed compared with Putin, who was sporting a suit.

Van Damme was apologetic for his casual attire, and Putin responded by taking off his jacket and rolling up his shirtsleeves to put him at ease. Everything seemed great, for a while.

“I go for my bag to take my chapstick while the fight is happening. As soon as I go to my bag, I’ve got 20 security guys coming at me,” says Van Damme.

They thought he had a gun.

“They are very fast,” says Van Damme, who was able to explain himself out of the situation.

Van Damme’s time with THR is winding down now. He moves on to reflecting on his age and what he’s learned over the past decades. He’s no longer so image conscious, no longer so focused on “the biceps and the ass muscles.”

“I had my ups and downs,” he says of his career. In his new film We Die Young, he plays a veteran who helps a young boy who is trying to avoid gang life in Washington D.C.

“I’m not afraid to make a boo-boo with my mouth,” he says of his new mentality as an actor. “In We Die Young, I’m real. I tell the truth.”

As he’s about to make his exit, he invites the THR staff to take a photo with him. They pose like warriors, with Van Damme’s form by far the best of anyone. And then like that, he’s gone.

Why Did Jean-Claude Van Damme Get Replaced in 'Predator'?