John Cena has played supporting roles in raunchy R-rated studio films like Amy Schumer’s Trainwreck and Tina Fey and Amy Poehler’s Sisters, both of which offered a hint of his wild comedic side. But it’s the raucous new teen comedy Blockers where the former WWE star steals some of the spotlight by being the film’s most prolific source of laughter.

The Universal film, which opened Friday and benefits from the familiarity audiences have with the modern R-rated comedy, is a boisterous story about three parents who try to stop their teenage daughters from losing their virginity on prom night. There’s plenty of profanity, unexpected nudity played for laughs, a heaping helping of gross-out humor, and a requisite amount of heart and sweetness in the finale. Cena’s work in the film, however, suggests a level of comic timing and heedless abandon that can be found in the work of fellow ex-wrestling star Dwayne Johnson.

While he and Johnson have both had steady movie careers outside of the ring, The Rock has been at the front of a handful of massive successes, trading on his likable persona and increasing bankability over the last decade. If it performs at the box office, Blockers seems like a big step in the right direction for Cena, whose willingness to do just about anything for a laugh makes the film even more endearing.

Cena plays Mitch, a devoted husband and father whose dedication to his daughter leads him and two other parents (Leslie Mann and Ike Barinholtz) to essentially stalk their teenagers at their prom once they realize the girls each want to have sex with a boy for the first time. As much as the other parents slot into familiar comic stereotypes, Cena’s performance is, fitting his wrestling persona, more unexpected and satisfyingly intense.

As in Trainwreck, Cena gets to play up the softer emotional side of a big, tough guy as Mitch; when we first see his character in Blockers, he’s unable to stop from crying as he sends his daughter off to her first day of kindergarten. This joke is something filmmakers have employed with Johnson’s big starring roles, too; one of the running gags of last holiday’s Jumanji: Welcome to the Jungle was watching a massively built movie star act like an emotionally distraught teenage nerd. 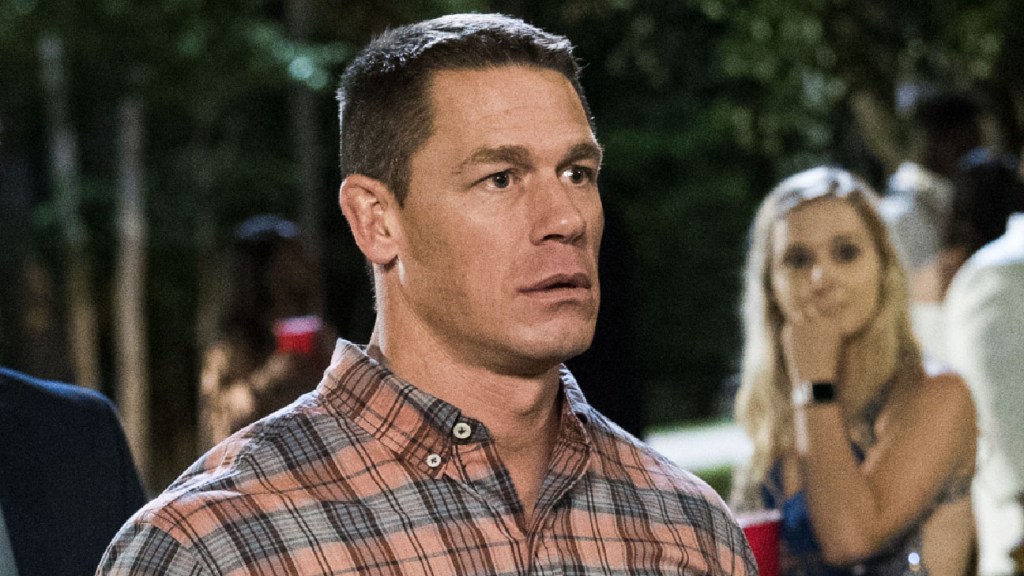 While Cena’s character Blockers character has his tender moments, it’s when he leans into his gruff paternal side that the jokes land. Mitch is as fiercely protective of his close-cropped haircut as he is of his daughter Kayla, making him doubly infuriated at the young man she’s taking to prom. When Mitch stares at his long hair, he points at his own short hair and shouts, “This is too long!”

Once Mitch and the other parents embark upon their journey to the prom, it becomes clear how out of their depth they are. In what is clearly Blockers’ comic high point, the three adults try to crash a post-prom party at which their daughters are potentially hooking up with their dates; the only way to get in is for one of the parents to “butt-chug” a lot of beer. The unlucky volunteer is, of course, a very displeased Mitch.

Cena’s willingness to portray the physical and mental desperation Mitch feels in this moment — having to be coached into…opening himself up to successfully chug the beer — makes the gross-out set piece hilarious. It’s a debasing moment, but one which Cena doesn’t shy away from; here, at least, he tops Johnson for sheer will and bravery.

What makes Cena’s performance so charming is that he’s willing to make fun of himself and the aura surrounding a guy who dwarfs his co-stars. The movie is at its strongest when it lets Cena take control of a scene, whether it’s in displaying tenderness toward his family or his rigidity related to his personal hygiene and fashion.

Cena has fun depicting Mitch’s drunken competitiveness, which makes the character almost more dangerous than when he’s sober. And the actor’s innate charisma also strengthens the film’s emotional core, sidestepping the premise of parents being too distrustful of their (mildly responsible) teenagers. In the finale, when Blockers aims to depict the bond between father and daughter, Cena’s up to the challenge.