There’s something special about the first John Wick, something that hasn’t carried over well into its two sequels (not to mention its comic book spin-offs). The first film feels like a confident rejection of the sloppy Michael Bay/Luc Besson/MCU Cuisinart style of contemporary American (and Europacorp-style) studio-produced action filmmaking. John Wick‘s action scenes feature ostentatious stunt work and choreography instead of bland coverage. Its dialogue is also stripped down to an almost Walter Hill level of pulp poetry. John Wick is, in that sense, a breath of fresh air after so many years of migraine-inducing choppy editing, by-committee screenwriting, and palsied hand-held photography.

Better still: almost every actor in the film’s stacked ensemble cast — Willem Dafoe, John Leguizamo, and Clarke Peters! — is introduced like they’re movie royalty. You don’t need a ponderous backstory when you’ve got actors whose personal histories are suggested by the lines in their faces, their facial expressions, and their body language. John Wick doesn’t just move, it glides from scene to scene, because its creators didn’t waste time over-developing their archetypal characters or their patchwork world. All you need to know to enjoy John Wick is: retired hitman John Wick (Keanu Reeves) is not somebody to mess with … and yet, somebody did. Then it’s off to the races for a bunch of cool action poses and set pieces.

In Chapter 3, the High Table (a shadowy criminal organization that employs almost every character actor in CAA’s Rolodex) has already declared Reeves’s character “ex-communicado,” a fancy way of saying “on the chopping block.” Wick has a matter of minutes before a big bounty is put on his head: $14 million, no, wait, $15 million, and, no, sorry, just $15 million, it’s $15 million (Where’s Dr. Evil when you need him?). So Wick races to the New York Public Library while a typing pool of heavily inked secretaries with retro ’50s hairdos put the call out to various money-hungry assassins via rotary phones and ancient word processors. This is not New York as we know it, but a fantasy of what New York should be according to action filmmakers whose dream city is just a laundry list of architectural fetishes: marble floors, ornate brass moldings, spotless glass tabletops, vaulted ceilings, Romanesque columns, and lots of neon lights. Even Doyers Street, a Chinatown landmark, has never, in real life, looked so tacky, almost like a diorama version of the iconic alley. A little bit of that Edward-Hopper-for-club-kids aesthetic went a long way in John Wick; now it’s just played out and repetitive (we get it, you don’t like walking through the “Disneyfied” Times Square either). 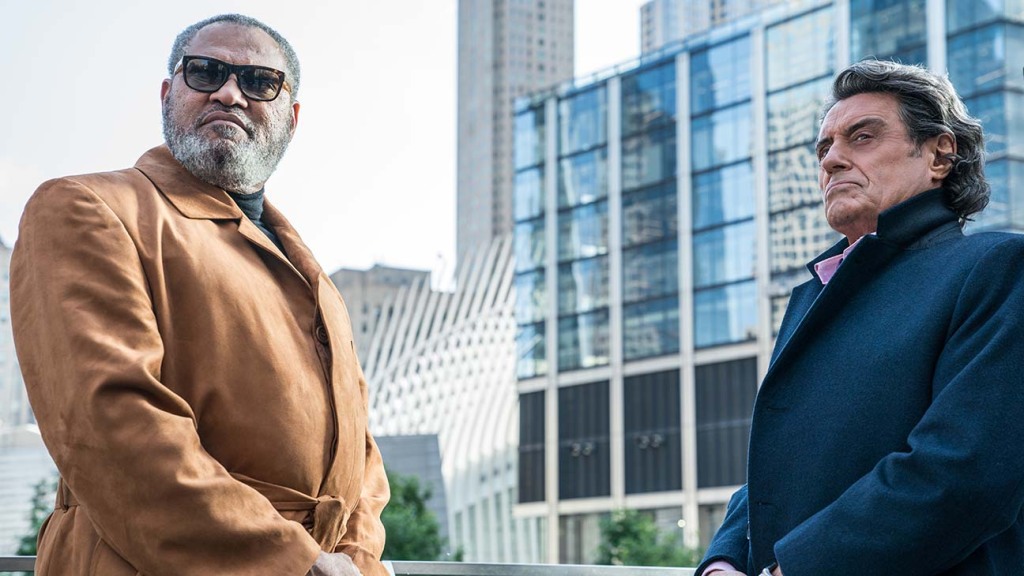 None of this would matter much if Chapter 3 didn’t end with Laurence Fishburne’s Bowery King declaring war on behalf of the city. Which city, the one you just magpied out of recognizable existence? Sure, it may sound like fun to see a fantasy version of Manhattan that’s defined by landmarks like an elevated train, a double-decker bridge, some checkered cabs, and a couple of police horses. But these things don’t convey much beyond a general affection for the stylish movies of Walter Hill, Michael Mann, and Johnnie To. Clean lines, bright lights, smooth surfaces, ornate fixtures and heavy artillery: this isn’t a cogent style, it’s a Pinterest mood board.

Still, when John Wick: Chapter 3-Parabellum begins, nobody but Wick is mad at the High Table. That changes soon after several members are threatened by a mysterious figure called the Adjudicator (Asia Kate Dillon). They tell (rather than warn) all of John’s fair-weather friends — the Bowery King, Sofia (Halle Berry), and the Director (Anjelica Huston) — that they will be punished for having helped John Wick in John Wick: Chapter 2. This removes all mystery or urgency whenever Wick asks his buddies to help him escape the High Table’s punishment. It’s like a sad, boring little dance: he asks for help, they scowl and tell him that he’s ruined their lives; he then repeats his demand through clenched teeth, and they eventually give in, but only after they remember how much they are just like John Wick. Something — a dog, a coin, a cross — reminds them of who they really are … but it’s almost impossible to know who they’ve become based on what’s presented through dialogue and on screen. Characters talk defensively (and at length) about their respective pasts, but nothing they say suggests that whatever they lost is worth regaining or even recalling (especially not a tossed-off subplot about Wick’s bygone days as a star pupil in the Director’s School for God-Fearing Russian Assassins). Every consequential action in Chapter 3 is inevitable, but none of it seems to matter. 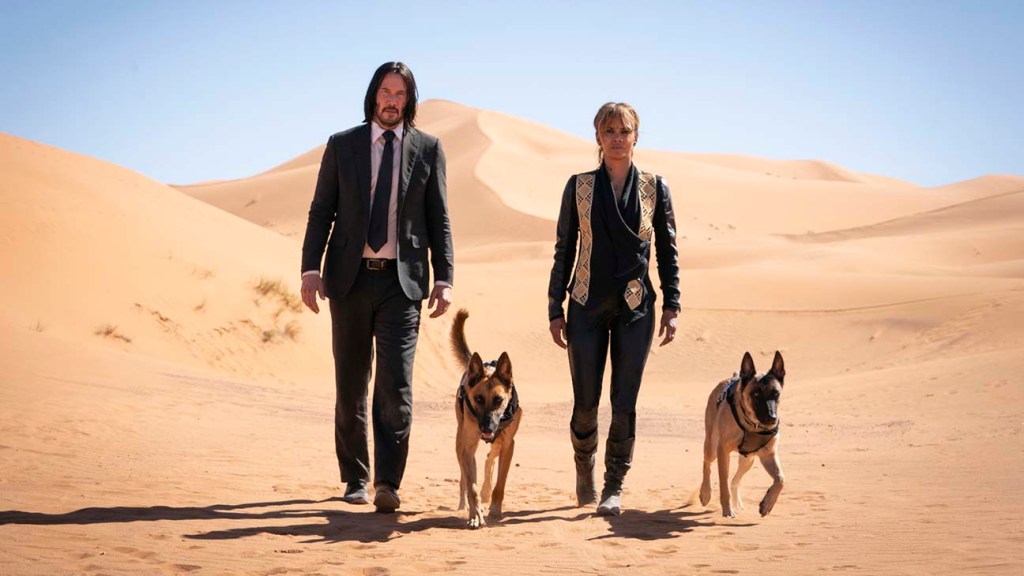 Even the uninspired maximalist action set pieces (also choreographed by John Wick‘s Jonathan Eusebio) are longer but not necessarily better in this film than in its predecessors. There’s nothing playful or urgent about the violence in these scenes, not even when Wick breaks a man’s neck using a hollowed-out book. A gunfight in the Continental — a scene that’s tellingly cut in two so that Wick can pause to re-arm himself with bigger guns — and a Moroccan shoot-out are equally tedious, though at least the Moroccan massacre is unintentionally funny, given the periodic appearance of Sofia’s junk-chomping guard dogs (dressed in body armor, as if to reassure viewers that no good boys or girls were harmed during the making of this film). The action during this characteristic scene does not escalate, because there’s no give and take between Wick and the dozens of disposable opponents. He sees them, and then he kills them. Sometimes they struggle while he (or Sofia) shoots them, and sometimes there’s a dog attacking their junk. Seems like a lot of effort for a couple of elaborately staged kill shots and/or crotch jokes.

Nothing in Chapter 3 matches the inspired choreography in John Wick‘s home invasion brawl or its night-club fight, the latter of which is dutifully alluded to in one of several joyless shoot-outs. Like both of the previous John Wick movies, this new sequel features action scenes that recall to several other recent action films, including The Villainess (motorcycle chase), Oldboy (Vivaldi’s “Winter” concerto), The Matrix (“Guns…lots of guns”), The Raid 2 (the presence of Indonesian martial artists Cecep Arif Rahman and Yayan Ruhian and their use of curved karambit knives), and both prior John Wick films (the swimming pool and the unhinged cab door). These callbacks wouldn’t be so annoying if the Chapter 3 fight scenes were impressive on a moment-to-moment basis. Sadly, there’s only one unforgettable moment among these otherwise contrived scenes: when Rahman and Ruhian’s unnamed “Shinobi” assassins knock Reeves on his ass and then help him back up, twice. The scowl on Reeves’s face when he reluctantly grabs their hands is priceless.

Also (maybe) unintentionally annoying: Zero, Mark Dacascos’s inexplicably twitchy antagonist. Dacascos’s hammy performance is fine, but his character is a hot mess. Zero is a sushi-making assassin who is ostensibly hired by the Adjudicator because of his special man-slaying abilities. Zero is relentless, to be sure, but the rest of his talents are up for debate. He’s also apparently a big Wick fanboy, as we learn in an ostensibly funny scene where Zero suddenly stops glowering at Wick and starts gushing at him (“Is that the dog?”). So when Zero eventually dies, he’s boasting about how evenly matched and similar he and Wick are. Which is presumably funny because they’re nothing alike, since Wick constantly stands for something and Zero doesn’t.

But what exactly does Wick stand for? He and his allies talk a lot about the High Table, represented here by the Adjudicator, and its leaders’ disrespect for “the rules” that govern their pseudo-noble underworld society. But really, beyond a fetishistic attachment to dogs, coins, crucifixes, and grisly violence, what do these guys care about? According to them: loyalty, but again, none of the film’s make-or-break confrontations — the ones that supposedly have dire consequences for characters like Sofia or the Director — leave a mark. A finger is lopped off, a dog is shot, some skin is sliced up, two hands are mutilated, and a weird little tramp-stamp-style  brand is applied to Reeves’s lower back. There’s nothing ingenious or devastating about this violence; it just happens a lot and in pseudo-meaningful poses, like the Director’s stigmata-like wounds or Wick’s yakuza-style finger removal (only now it’s his ring finger and not his pinkie). None of these over-the-top (but weirdly underwhelming) acts of violence carries much emotional weight, since none of Chapter 3‘s game supporting cast members are given dialogue or direction that allows them to suggest that their characters’ lives, let alone their allegiances and their loved ones, matter.

But that’s Chapter 3 in a nutshell: a lot of buildup for an underwhelming payoff that seemingly flies in the face of the sleek, thrilling style of the first John Wick. Instead of being an emblematically disruptive loner, Wick continues to re-invent himself as a hipster-friendly James Bond alternative: just as stylish, but half as iconic. Another sequel is on the way, according to John Wick: Chapter 3-Parabellum’s anticlimactic finale; let’s hope its consequences are a little more dire.

'John Wick' Director on the Scene He Fought For