The $88 million global haul earned by 2014’s John Wick wasn’t big by superhero tentpole standards, but it gained the franchise a cult following among fans intrigued by the stoic hit man played by Keanu Reeves and his quest to exact revenge for the death of his dog and the theft of his car. That following was enough to greenlight a sequel, which in 2017 more than doubled the original’s box office, bringing in $171 million worldwide.

This time around Wick is on the run from other assassins, having broken a cardinal rule of the industry by killing one of their own. Everyone is after him to claim the $14 million price that’s been put on his head and, as an outcast, he doesn’t have access to the resources previously available to him. That includes not being able to seek shelter in The Continental, the secret hotel where dangerous people can hide and recover in times of trouble.

The marketing campaign for the Thunder Road Films production (distributed by Lionsgate) shows the audience that they can expect more of the well-choreographed action sequences that have made the first two movies so popular.

The first poster (produced by design agency L.A. Associates) from mid-January simply shows Wick standing outside the door of The Continental. Even the release date is reversed, as if it’s printed on the door we’re looking out from the inside of the building. The second poster has him standing alone against an army of assassins and is the first to feature the full official title.

Ten character posters came out in mid-March that featured all the main actors, each placed in a setting appropriate for them and each sporting a different color color coding.

“Every action has a consequence” is the copy found on an additional poster released later in March that shows Wick looking haggard but still deadly with dawn breaking behind him, an image that hints at John having had a rough night.

An “Artist Series” of posters from early May — a series coordinated by the same agency that produced the other one-sheets but featuring the work of different artists and designers — offered impressionistic takes on Wick, with one focusing on the dog he takes under his protection.

January’s first trailer (32 million views on YouTube) makes it clear that the events of the previous two movies have caught up with Wick. He just wants a safe way out but a bounty has been placed on his head and even the safety of The Continental is no longer absolute. The rest of the trailer shows him being hunted by various mercenaries and other bad guys, seeking help and shelter wherever he can find it.

Two months later the full trailer (22.6 million views on YouTube) was released, showing that Wick is on the run because he broke the rules of The Continental, seeking help where he can even from those reluctant to provide it. Everyone is after him but everyone is probably going to wind up dead. It ends by reminding us that all of this — the events of all three films — are because the puppy from the first movie was “more than just a puppy,” at least to John.

National Puppy Day in March was celebrated with a video showing the bond between Wick and a new dog he comes across on his adventures, playing like some sort of emotional plea for adoption instead of an ad for a very violent dark comedy. More footage was shown off at CinemaCon in April, generating buzz for the fight choreography and stunt action.

The first TV spot ran in late April showing Wick on the run and in need of lots of guns, a little sleep and some help. Another spot makes it clear Wick is dealing with a price being placed on his head, one that a lot of people are anxious to collect.

Additional commercials hit different aspects of the story, with several coming out in the two weeks leading up to release, including one that focused on Wick’s love of dogs. Another commercial titled “Bullet Time” (481K views on YouTube) was released just days ago featuring a shot of a bullet rippling through water in a way very similar to the famous sequence from The Matrix, with the name of the spot alluding to that as well.

Lionsgate partnered with Snapchat on a feature allowing users of the app to create their own fan art using Lens Studio and then have that artwork made available as an augmented reality lens to be applied to photos and videos. Those creations could even be added to Lionsgate’s own Snapchat account as entries in a contest.

Outdoor and online billboard/banner ads used artwork similar to the poster images, showing Wick facing down dozens of armed bad guys or sitting in The Continental while surrounded by the other characters, many of whom are after him for one reason or another.

Clips began appearing in late April showing Wick making sure his dog is safe and negotiating with Sophia for his safety. At the same time featurettes were released exploring the mythology behind The Continental and how it no longer offers Wick the refuge he needs and how Reeves and the filmmakers drew inspiration from other films to increase the intensity of the action sequences in the movie. Another clip was released in early May showing Wick meeting with The Director (Anjelica Huston) about seeking refuge from the onslaught he’s facing.

The Hanson Place hotel in Brooklyn was given a Continental-themed makelift for the movie’s premiere, where the director and crew spoke about what audiences could expect from the story.

Visiting The Continental became a reality for those in New York City beginning May 10, when Lionsgate set up The Continental Experience, a recreation of the hotel at the same location the film was shot where visitors could interact with actors posing as hotel staff while learning more about the movie. Some of the movie’s stars visited the setup to give fans in attendance an additional thrill.

There were two interesting video game extensions of the Wick franchise and brand. The first, John Wick Hex, came from publisher Good Shepherd and allowed players to play as Hex, setting a strategy for taking out opponents in combat and getting a feel for how many steps are involved in doing so.

The second wasn’t officially announced as of this writing, but updates to the popular online game Fortnite featured a character that looked suspiciously like Wick along with a house resembling his, right down to hidden treasures that could be uncovered by digging through the concrete floor of the garage just as Wick does in the first movie. Those treasures were labeled as “Wick’s Bounty,” fueling speculation a partnership between Epic Games and Lionsgate was in the offing. 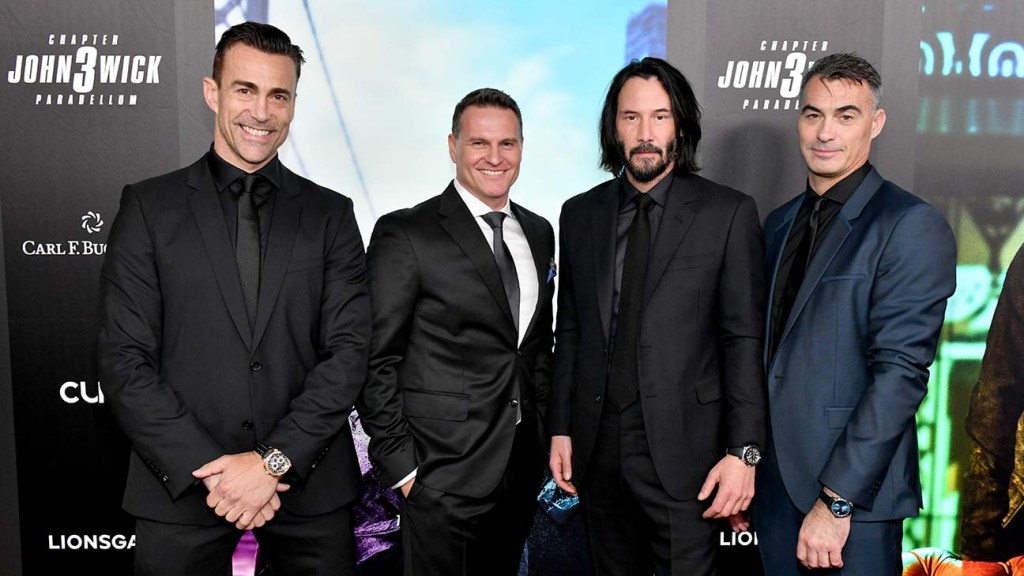 The core message of the campaign is summed up nicely in a brief video that was used as a pre-roll ad on YouTube. It features almost no dialogue but shows Wick is still the best at what he does, even if that means dispatching armed pursuers with ease while riding a motorcycle. It showcases the movie’s signature stylistic violence, heavily influenced by the Hong Kong action films made famous by director John Woo and others.

Lionsgate also has capitalized on how fans were immediately intrigued by The Continental, an example of this secret society lurking just under the ordinary world where assassins pay in special gold coins and can receive medical care as long as they don’t break the rules. So it’s sought to bring the audience into that world through the experiential event in New York City as well as a feature on the website where visitors can click around the hotel’s lobby to learn more about the characters in the story.

Wick’s role as an outsider to that society is made tangible by his expulsion from that hotel, something made clear in the trailers as well as the first teaser poster, which has him literally looking in the front door that remains closed to him. While the campaign promises audiences more of the same it’s also clear this new installment in the series has something new to offer, a new challenge Wick has to overcome before he can find some measure of peace.