“What a lucky clown you are! You don’t have to wipe off your laugh,” one clown says to a second. This second clown, Gwynplaine, bows his head into shadows, masking the permanent grin stretched across his face in a failed attempt to convey, if not sadness, then anything other than mirth, joy and laughter. Though often classified as a horror movie, The Man Who Laughs (1928) stretches wider than that. Paul Leni’s silent film, based on Victor Hugo’s novel of the same name, is a romantic melodrama steeped in German expressionism and body horror. Universal’s success with the film paved the way for their adaptations, Dracula (1931) and Frankenstein (1931), ushering in the era of Universal Monsters and forever changing the commercial horror movie. Beyond the screen, it was Conrad Veidt’s performance as the ever-grinning Gwynplaine that gave birth to DC Comics’ iconic villain, the Joker. With this week marking both the official start of the Halloween season and the release of Todd Phillips’ Joker, there’s no better horror film through which to examine its contemporary influence than The Man Who Laughs.

In terms of the horror of Leni’s film, the opening is far more entrenched in that realm than what follows. The film begins with the capture of Lord Clancharlie (Veidt), a rebel and political enemy of King James II. The King’s conniving jester sentences Clancharlie to death in an iron maiden, but not before telling the former Lord that he has given the man’s young son, Gwynplaine, to a band of child-sellers, comprachicos, who have surgically disfigured the boy with a permanent grin so that he may always laugh at the foolishness of his father. It’s a pretty hardcore origin story, especially for early Hollywood, and going by the horror films that would follow, there is an expectation set for the present-day viewer that Gwynplaine will become a callous monster in search of vengeance. But The Man Who Laughs isn’t a tale of vengeance. Rather Gwynplaine grows into adulthood with the aid of a kindly caravan owner, Ursus (Cesare Gravina) who has built a carnival attraction around Gwynplaine as “The Laughing Man.” Though he suffers the mockery of festival-goers who only see him as a side-show freak, he finds solace in the love of a blind woman Dea (Mary Philbin).

Like Victor Hugo’s more famous work, The Hunchback of Notre Dame, The Man who Laughs juxtaposes interior goodness with physical deformity, resulting in broody romanticism. Gwynplaine is never made out to be sinister, yet his grin is unnerving even by contemporary standards. It serves a reminder of the lasting horror that can result from simple, evocative imagery. Veidt’s tear-brimmed eyes and wide grin suggest lunacy, even when his character’s words beg for sympathy. Caught in the political schemes of the former jester, Barkilphedro (Brandon Hurst), who killed his father, the Laughing Man finds himself being used as a puppet Peer in the House of Lords until he rejects his title and the orders of the Queen to marry a duchess, Josiana (Olga Baclanova), and flees England while citizens rush after him with torches. The imagery, and tragic alienation of the lead, are reminiscent of James Whale’s Frankenstein. The ending is a happy one, unlike Hugo’s novel in which Gwynplaine and Dea both die, as opposed to being reunited as they are in the film. But the societal demands and ghastly grin placed upon Gwynplaine leave a more indelible impression than the love story. “A king made me a clown! A queen made me a Peer! But first, God made me a man!” Gwynplaine says before the film’s climax. It’s a worthwhile takeaway from the film, but that grin proved to be too powerful to just let rest in within the confines of happy endings and ordinary men.

The specifics of the Joker’s creation, and who first came up with the idea has been hotly contested for decades. But one thing that the Joker’s credited creators, Bob Kane, Bill Finger and Jerry Robinson, all agreed upon was that Conrad Veidt’s Gwynplaine and his rictus grin was their inspiration for the Clown Prince of Crime who made his debut in Batman No. 1 (1940). Those early appearances of the Joker are unmistakably based on Gwynplaine’s look, right down to the hairstyle, combed to a peak in the back. While the character’s look has evolved over the years, comic artists and writers have repeatedly come back to Veidt’ performance and Leni’s film in crafting the Joker. In Alan Moore and Brian Bolland’s Batman: The Killing Joke (1988), the most famous of Joker stories, Bolland’s depiction of the character, complete with tear-brimmed eyes, directly recalls Veidt’s eyes in the House of Lords. And the Joker’s possible origin story, which sees him as a struggling stand-up comedian who turns to crime when he is unable to support his wife and unborn child, is suitably tragic in true Victor Hugo fashion. The first encounter between Batman and the Joker was retold in Ed Brubaker and Doug Mahnke’s Batman: The Man Who Laughs (2005), which fittingly reconnected the character to Leni’s film for 21st century comic readers. 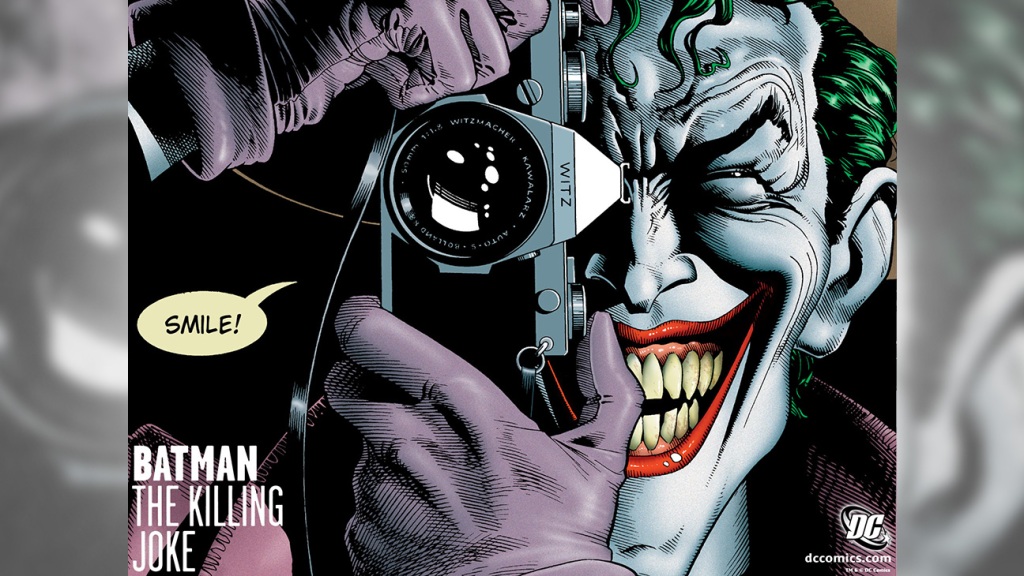 Surprisingly, The Man Who Laughs never received another Hollywood adaptation, although it did receive one Italian and two French adaptations in 1966, 1971 and 2012, with Gwynplaine’s scarring becoming increasingly pronounced and grotesque. Yet the film’s legacy lived on through DC Comics’ movies. Tim Burton’s Batman (1989) is largely defined by its allusions to German expressionism, and the filmmaker is no doubt a fan of Veidt, given that The Cabinet of Dr. Caligari (1920) and The Man Who Laughs make up his cinematic ancestry. Jack Nicholson’s Joker transformation plays out like a horror movie, and the reveal of his perma-grin holds the same kind of power as it did when Gwynplaine first revealed his own. The 2012 adaptation opted for a Glasglow smile, not unlike that of Heath Ledger’s Joker in The Dark Knight (2008). And Jared Leto’s Joker, featured in Suicide Squad (2016) isn’t without his own Gwynplaine connections, notably in the way the character covers up his smile with his hand before revealing his grin. The latest onscreen Joker, Joaquin Phoenix, lacks the permanent grin of his comic book namesake, but he may have his own ties to The Man Who Laughs. 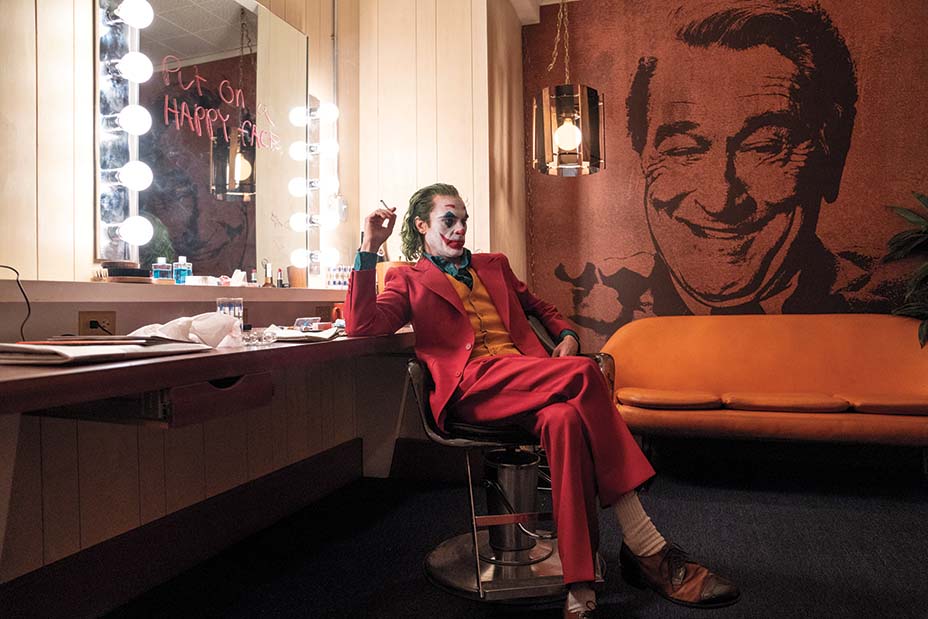 Phoenix’s clown makeup is almost an exact copy of the supporting clowns in The Man Who Laughs who form the troupe of Ursus’s show. The trailers for Joker have also showcased a Gotham museum showing a Charlie Chaplin retrospective, with Modern Times (1936) as the featured film. What we’ve seen of Phoenix’s physicality in the film mirrors the work of silent actors like Chaplin, Buster Keaton, and yes, Conrad Veidt. The retrospective may be an allusion tying Joker to his silent film roots. And of course, there are the thematic ties between Gwynplaine and Arthur Fleck, men who society has cast off and then found new and dangerous purpose for. Whether those are the only connections featured in Todd Phillips’ film remains to be seen. But in looking at the evolution of the Joker, it’s clear that Gwynplaine has always been there at the corners, the ends of a smile, the punchline of a joke that has left an altruistic romantic figure as the source of our great cinematic and comic book monsters.

'Joker,' Gun Violence and Warner Bros.: Inside the Tricky Marketing of a Modern Supervillain