[This story contains spoilers for Us]

We’ll soon be seeing double all over again. On Tuesday, Jordan Peele’s Us hits Blu-ray and DVD. The horror film, which is the highest grossing original film of 2019 domestically, earned $254.6 million worldwide and proved that Peele is a brand unto himself. In the days, weeks and months following the film’s release, audiences have been pondering over the film’s multiple meanings — its political and social implications, its pop culture and historical references, and the logic behind its horror.

While Peele has largely refrained from giving too many direct answers about Us, preferring viewers to take from it what they will, the Blu-ray is loaded with special features that provide insight into the mind of one of horror’s newest and most exciting filmmakers. Heat Vision has gathered the most interesting and horrifying bits of information gleaned from the featurettes.

Among the things he addresses is a popular fan theory about Jason (Evan Alex), son to Adelaide (Lupita Nyong’o) and Gabe (Winston Duke) and brother of Zora (Shahadi Wright Joseph).

“I always thought of the family in terms of a certain archetypal foursome. Adelaide is the leader, the captain. Zora is the warrior. She acts before she thinks and she kicks ass. Gabe is the fool, even though on the surface he looks like he might be the leader or the warrior. And Jason is the wizard. He’s the magician. And as for the fan theory that Jason might be a Tethered himself? Well Peele has a different theory. “I have this kinda concept of Jason that he can sorta see through the veil. You can see these moments where he’s observing his mother and he’s meant to be a little step ahead of us, the most clever of us that’s sorta figuring out there’s something more to Adelaide’s story than we see.” A rewatch provides an entirely different insight into Jason’s journey.

Read on for more from the featurettes. 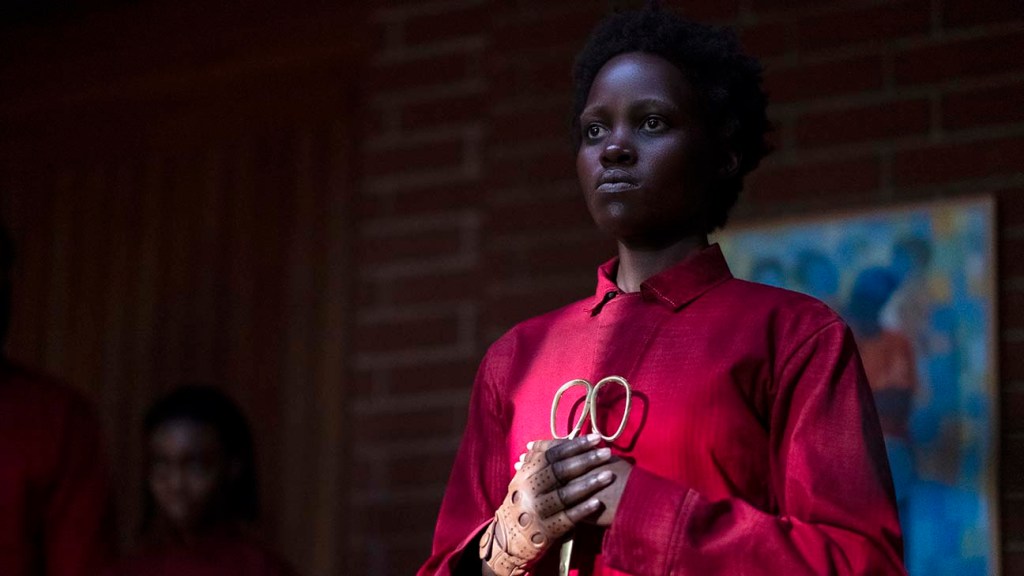 Nyong’o steals the film as both Adelaide Wilson and her doppelganger, Red. During the film’s press circuit, Nyong’o spoke a lot about what influenced her performance, particularly Red’s unique vocals and speech patterns. In the Blu-ray feature “The Monsters Within Us,” Nyong’o reveals the inspiration behind her chilling movement. “One of the words that Jordan used to describe her movement was the word cockroach,” Nyong’o says. “The thing about cockroaches is that they scurry and it’s so hard to hit them, but then at the same time they are so still that they can often go unnoticed.”

Peele’s description of Red doesn’t just play out in terms of her stiff, patterned movements, and ability to hide right beneath the characters’ feet, but also in terms of the thematics of the film. Red and the Tethered are survivors, and when they first emerge, they do so at night like their insect counterparts. Cockroaches are also notable for being able to survive for a month without food and a week without water, and the limited lifestyle and resources of the Tethered reflects this. Cockroaches are said to be some of the most adaptable creatures on Earth, and if we follow that line of thinking into the film then the Tethered seem very capable of surviving whatever fallout their emergence from the underground entails. If anything survives the end of this horror, it will be the Tethered and cockroaches. 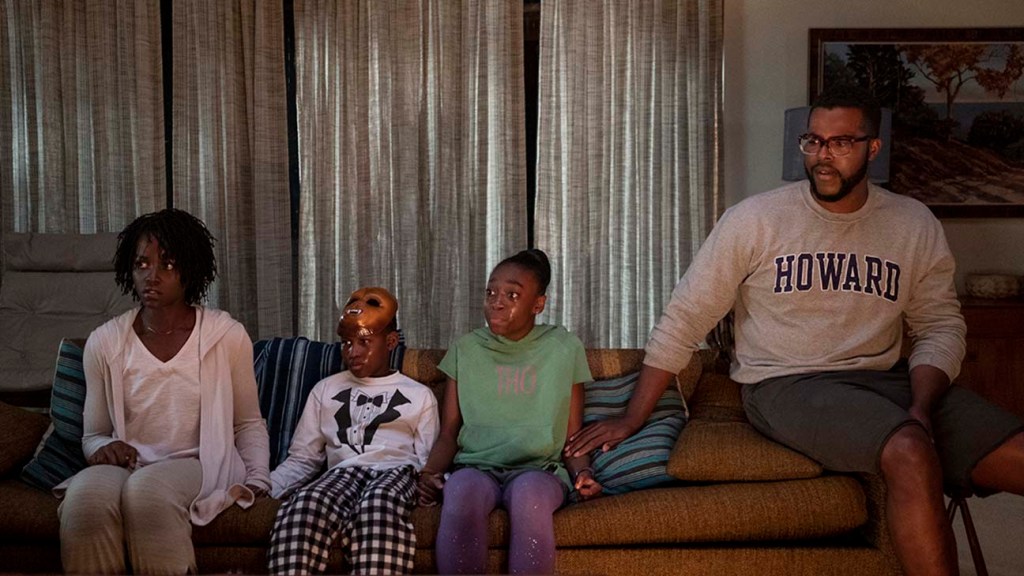 Because the actors in the film were playing two roles, each scene had to be shot twice, with one day spent filming the side of the “normal” human family and the next day filming the side of the Tethered. So how did they decide which perspective to shoot from first? Nyong’o was instrumental in determining that factor. In the feature “Tethered Together: Making Us Twice,” Nyong’o says, “I discovered that the best thing to do is to always shoot the dominating character in the scene first because I could bank that and react appropriately.”

In the scene where the Wilsons are sitting across from Red and her Tethered family, Peele talks about the complicated shooting and framing process he and DP Mike Gioulakis had to figure out. “We’re shooting it as if we had eight actors in that scene.” Peele would sometimes mimic the actors’ Tethered parts, speaking Red’s lines in her opening monologue to give Adelaide something to react to. This ensured that Nyong’o didn’t have to watch playback and could focus on the specific character she was playing in the moment. Peele referred to the process of shooting scenes twice from two perspectives as “an enormous challenge, but a really fun puzzle to figure out.” Everything from facial replacement, split-screen, which Peele referred to as the “Hayley Mills” in reference to The Parent Trap (1961), to having the actors play against their stunt doubles were used to achieve the scenes were the characters are playing against their doppelgangers.

“A lot of what makes the Tethered the Tethered is their hair,” Peele says. And with that concern over how the hairstyles differ between the Tethered and their counterparts is a unique black perspective. Peele credits hair department head Camille Friend with coming up with the different iconic looks seen in the film. “The choice of putting Adelaide in sister locks — I haven’t seen a central character wearing sister locks, and that alone is an important piece of film history, to get real black women’s hairstyles represented in film and in lead roles,” Peele says in “Tethered Together.” And undoubtedly, because every creative decision on the film seems to carry a dual meaning, the sister locks are also a nod to the twisted sisterhood shared between Adelaide and Red.

In terms of the clothing that Peele outfitted his “monsters” in, early fan speculation was right: Peele had classic slashers on his mind. “The red jumpsuit — just the idea of being able to use a flash of red going by in the darkness to signify your monster — there’s some allusions to some classic horror characters, like your Michael Myers, [the brown fingerless gloves] Freddy Krueger. On top of it there’s a connotation of an escaped prisoner. There’s also a cultish element,” Peele says. All of these design elements came together to form horror characters that are also grounded in reality, whether through recognizable pop culture elements or the every day.

“The idea for this movie came from a deep-seated fear in doppelgangers and I love the doppelganger mythologies and different movies that have dealt with them,” Peele says on the featurette “The Duality of Us,” which is the closest the Blu release comes to providing commentary. Peele’s influence by and insight into doppelgangers goes beyond the movies. “Throughout mythology doppelgangers often represent bad omens or a foreshadowing of one’s death, so I just wanted to pinpoint and work off of that extremely primal fear.”

Part of that fear in the film stems from a social anxiety as well. “One of the central themes in Us is that we can do a good job collectively ignoring the ramifications of privilege. I think it’s the idea that what we feel like we deserve comes at the expense of someone else’s freedom or joy. The biggest disservice we can do as a faction with a collective privilege, like the United States, is to presume that we deserve it and that it isn’t luck that has us born where we’re born. For us to have our privilege someone suffers,” Peele says while highlighting the only way to rid ourselves of that evil is by fighting for the less fortunate.

Hands Across America plays a major role in the film, not only in terms of its design choices, but also its themes. “When I thought to put the Hands Across America in this film, it was as an example of this American duality. Here you have this event on the one hand that’s a beautiful thing, right? We’re all going to get together, we’re going to hold hands, and somehow that’s going to cure hunger. The illusion that we’re contributing to something that is actually making change, as opposed to something that kinda makes us feel better and absolves us of our responsibility to enact actual change,” Peele says, highlighting the American mythology that contributes to our sense of privilege.

Looking at 'Us' Through Black Identity and Trump's America

What’s the deal with the rabbits in the film, other than the fact they serve as the Tethered’s food supply? Part of their presence Peele said was in the fantastical imagery of a girl arriving in another world, and he cites Alice in Wonderland, The Wizard of Oz, and The Nutcracker as inspiration, with rabbits of course being key to Lewis Carroll’s work. Beyond that, Peele says, “the animals in my story represent this battle between science and religion for me. I tend to like to explore the gray area where religion and magic and the unexplainable meet science. Between the two you have an abomination, a metaphor for humanity.” This gives some insight into the logic beyond the Tethered, how their existence seems to break the rules of conception and trade coincidence in for something stranger. The Tethered are a population residing in that gray area between science and religion, and while the film is grounded, it’s not without its supernatural leanings.

“[The rabbits] symbolize a lot of different things,” Peele continues. “The main connection to me was Easter. [Us] is a dark Easter of sorts. Red is the messiah who’s rising from the hole that she was left for dead.” There is something biblical within the film’s identity, and its exploration of our baser instincts and the impossibility for humans to be completely good when, as Peele says, we are bound by tribalism that allows us to place the humans we know above the ones we don’t.

Peele on Horror and What’s Next

“Horror has always been the way I personally deal with my own fears. I love the genre for that reason and I love the horror aesthetic,” Peele says in the featurette “Redefining a Genre: Jordan Peele’s Brand of Horror.” The cast and crew highlighted how impressed they were on set by Peele’s knowledge of the horror genre and his ability to play homage to the films he loves. “Some of my favorite horror films are A Tale of Two Sisters — it’s a Korean film and it’s beautiful. I love Birds. I love Nightmare on Elm Street. I think my favorite horror movie of all time is Alien. I think the ground that it broke in creating an elegant, singular, new type of monster, new type of environment, is just movie magic.” Peele says. “I think one of the great films that carried a powerful social message is Night of the Living Dead, and that movie was about race even though they don’t really talk about race in the film. I wanted to sorta follow that approach with [Us].”

As for what kind of magic Peele has up his sleeves for his next trick, well he doesn’t give any clues, but he does reconfirm what we heard earlier this year. “I think great horror is often grounded, which allows something crazy to be going on but you try to marry it with reality. And I don’t see myself moving far from horror any time soon.” Hopefully we won’t have to wait too much longer to find out what nightmare Jordan Peele has in store for us next.