Judd Apatow — the prolific filmmaker and producer responsible for the R-rated comedy boom, the latest entry being the dramedy The King of Staten Island — could never comprehend the benefits his comedic compatriot and Saturday Night Live maestro Lorne Michaels felt from taking a stroll for an hour or more each day. That all changed with the COVID-19 pandemic.

Apatow, 53, started walking two hours every morning. “It has kept me as close to sane as I get. I’ve always heard that Lorne would take a walk for an hour, hour-and-a-half, every day at lunch. And I would think, ‘Oh my gosh, that sounds so boring, taking a walk, what is that?’ But I got so much done and had so many ideas,” says the prolific director, writer and producer in a recent interview with The Hollywood Reporter.

Edie Falco to Star Opposite Pete Davidson in Peacock's 'Bupkis'

For Apatow, there’s no point in lamenting the impact of the COVID-19 crisis on King of Staten Island, a semiautobiographical tale about SNL star Pete Davidson — who battled mental illness and drug problems after his father, a firefighter, died during 9/11 — that had been set to debut on the big screen in June 2021. All plans were jettisoned because of the pandemic. Instead, the dramedy debuted on premium VOD after theaters shuttered in the latter half of March. Universal, where Apatow has a film deal, has never officially revealed how much the film made on PVOD, but insiders say it racked up a hearty $40 million or more in PVOD transactions.

Apatow directed the film from a script he wrote with Davidson and Dave Sirus. A comedy whisperer who has fostered the careers of numerous breakouts — a club that includes Seth Rogen, Kristen Wiig, Paul Rudd and Lena Dunham — Apatow declined to discuss financial details. Rather, the director of  The 40-Year-Old Virgin and Trainwreck (and producer of Superbad and Bridesmaids) is focusing on the return of movie theaters once the pandemic is over, and the positive impact of cash-laden streaming services. He’s making his next movie, an untitled pandemic-set comedy, for Netflix. Apatow also revealed his wish to make a This Is 40 sequel called, naturally, This Is 50. 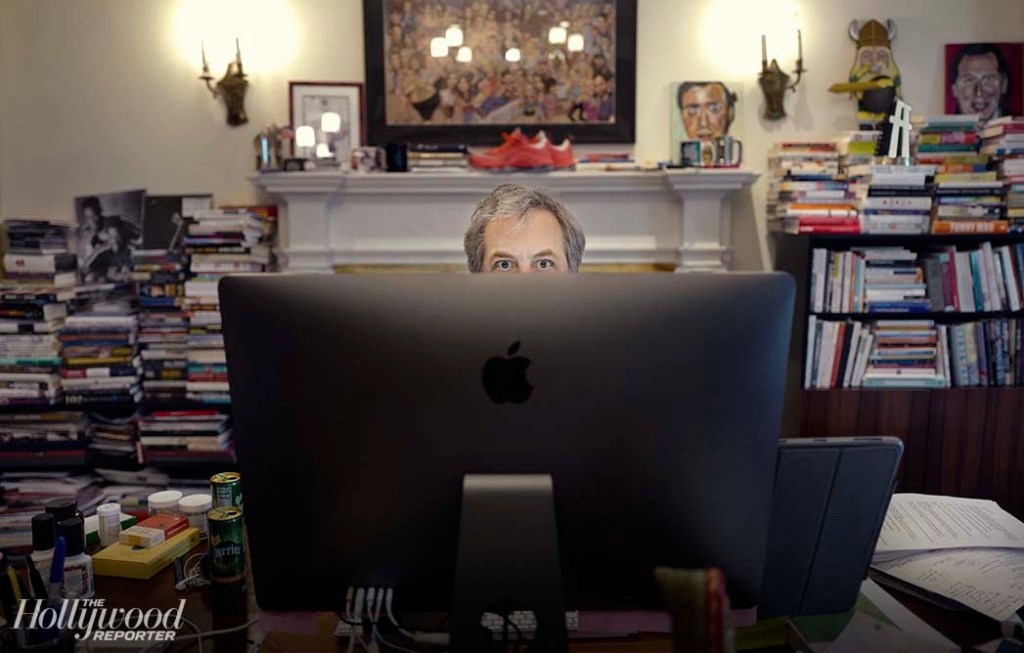 How did you discover Pete Davidson?

Heading into casting a movie, I always ask the star or the co-writer who I should know, because these movies tend to work better when they reflect that person’s world. With Bridesmaids, Kristen Wiig said, ‘You have to see Melissa McCarthy.’ Kristen had a list of other great friends that she had worked with in the past and we hired a lot of them. There was an amazing chemistry because of that. When I asked Amy [Schumer] who she wanted to cast in Trainwreck, there were a bunch of people, but one of the first ones was Pete [Davidson]. She said he was ridiculously funny. So I watched his stand-up and gave him a small cameo in the movie. He only had a few lines. Sometimes we do that just because we want to plant our flag. Think of it almost as an inside joke of who will be the next big comedy stars.

We had such a good time with him that day that Bill Hader recommended him to Lorne Michaels, and that was part of how he wound up on Saturday Night Live. And at about the same time, I asked Pete if he wanted to try to write something. It also takes years to get these scripts together. We had a false start with a different idea.

What was the first idea?

It was a college-themed comedy. And after a while, we thought it wasn’t the right concept for Pete. It became clear that the better version would be a deeper exploration of what he has been through, and what his family has had to handle. The movie  bubbled out of that.

What did you see in him that made you bet on him in the same way you did on people like Amy, Seth Rogen, or Lena Dunham?

He is crazy funny. That comedy comes from a place of having been through something that is truly unimaginable. It makes him very, very honest. He decided to be the type of person that doesn’t hold anything back. So he will tell you what he feels about everything and that makes him a very strong artist because he is not watering it down at any point. He is also very charismatic, deeply intelligent and a real character. He’s fearless even when the subject is pain and grief. 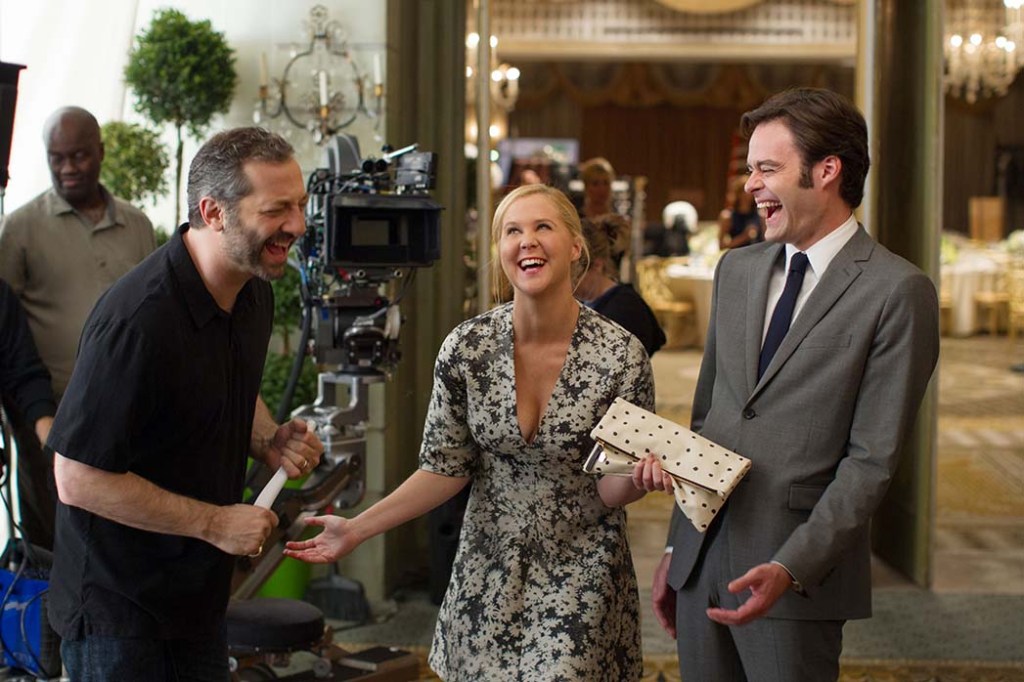 What is the most challenging about writing a semiautobiographical story?

I watched Garry Shandling do this for many years when I worked at The Larry Sanders Show. So this type of work has always felt natural to me, because I learned how to write by being in the room with Garry as he broke these types of stories over and over again. And I think what happens is there is a true story, it gets mixed in a blender with a lot of fiction and the result somehow gets you to the deeper emotional truth of what the film is about.

Both of your daughters, Maude and Iris, starred in This Is 40, while Maude stars in Staten Island. How would you describe those experiences? [Apatow is married to actress Leslie Mann, the mother of his two children.]

When you know people very intimately, it gives you the ability to get to certain places that you may not get to if you don’t know somebody well.

You wrote the script with Pete and Dave Sirus. What was that process like?

A lot of it was getting Pete to open up and tell us stories. So there were months and months of just sitting around, talking. We spent an enormous amount of time talking about funny incidents from his life, and what is unique and hilarious about Staten Island and his group of friends. This led to very open, deep conversations about his mental state during different periods of his life and what has been challenging for him. It was not like writing a normal comedy because we sat down and we said, “How are you doing? When you’re at your worst, what is going on? What do you think triggers it, how do you think you’ll be able to heal it?” And these were issues that Pete was in the middle of struggling with and probably will for his entire life. Hopefully, it has gotten a lot easier because he has discussed it so deeply and gone to therapy and he really cares about doing the work to get strong.

How tough was the decision to send The King of Staten Island to premium VOD because of the pandemic and theater closures?

It wasn’t hard for me. Of course I would much prefer being in a movie theater. We were all aware that something tragic was happening in the country and the movie theater experience was off the table unless we decided to release it a year or a year and a half later. And it never felt right to refuse people the chance to watch a film which might make them happy. 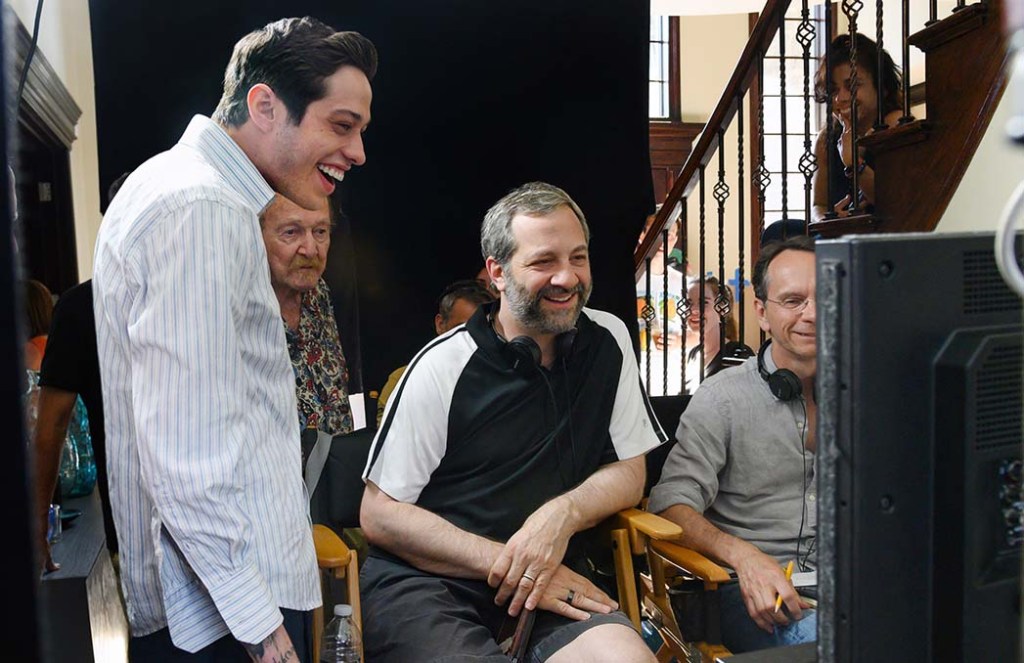 What happens to such films after the pandemic?

I am a big believer in people’s desire to go to the movie theater. We’ll probably be in a situation that will be similar to where we were before the pandemic, which was that theaters were mainly being filled with giant event movies and horror movies. There were less comedies than before, with most mid-priced dramas and a lot of independent movies moving to streaming. I think that’s where we’ll be when this is over, or maybe a more extreme version of that. Hopefully, theaters will find new ways to bring in people, because watching movies with other people is a magical thing. At the same time, there are so many great movies being made with higher budgets because of the needs of streamers. I think that’s also incredibly positive. People are getting all sorts of opportunities because of the streamers war. And the only downside really is, if there’s a glut of content, how many of these movies are really remembered by the audience?

Speaking of streamers, your next movie is a pandemic-related comedy for Netflix. When does production begin?

Hopefully I’ll be shooting at the end of the winter or the early spring, and I’m very excited to get going. It’s about a group of people trying to make a movie during the pandemic, and a lot goes wrong.

As a discoverer of talent, who do you have your eye on next?

I’m about to produce a movie that was written by Billy Eichner and Nick Stoller that Billy Eichner is going to star in, a romantic comedy, and we’re looking to do that later this year. Billy is one of my favorite people and this is something I’ve been working on for a while and we were about to start shooting last year.

You were a vociferous critic of Trump on Twitter. Are you going through withdrawals?

I’m so happy that he’s gone. It’s like we’ve all been locked in the house with a violent, abusive parent for four years. But I’m definitely nervous about what that all mutates into. I’m concerned that there’ll be a new variation of Trump who maybe is smarter and demented in a different way and we’ll be right back in a similar situation.

I definitely would make This Is 50. I am always thinking about it. I have an idea for it and was actually weighing whether or not to do that movie or the Netflix film, but it didn’t seem like This Is 50 was appropriate for this exact moment. But I hope I get to do it. I really like movies that revisit people over time. I need to do my version of Boyhood. We’ll see if we get the opportunity to do it. (Laughs.) 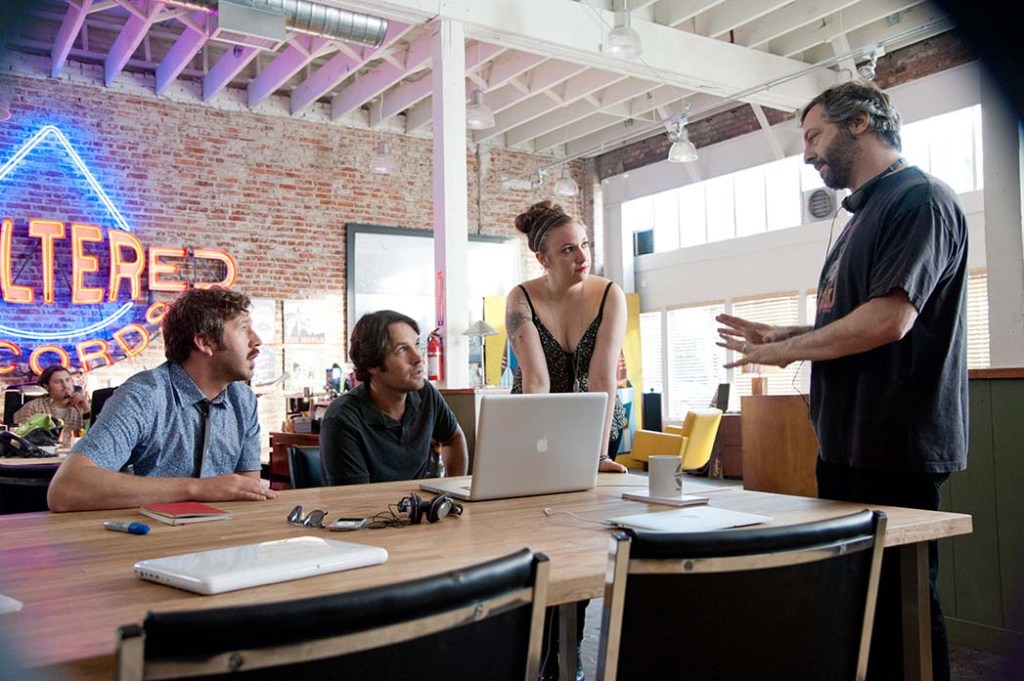